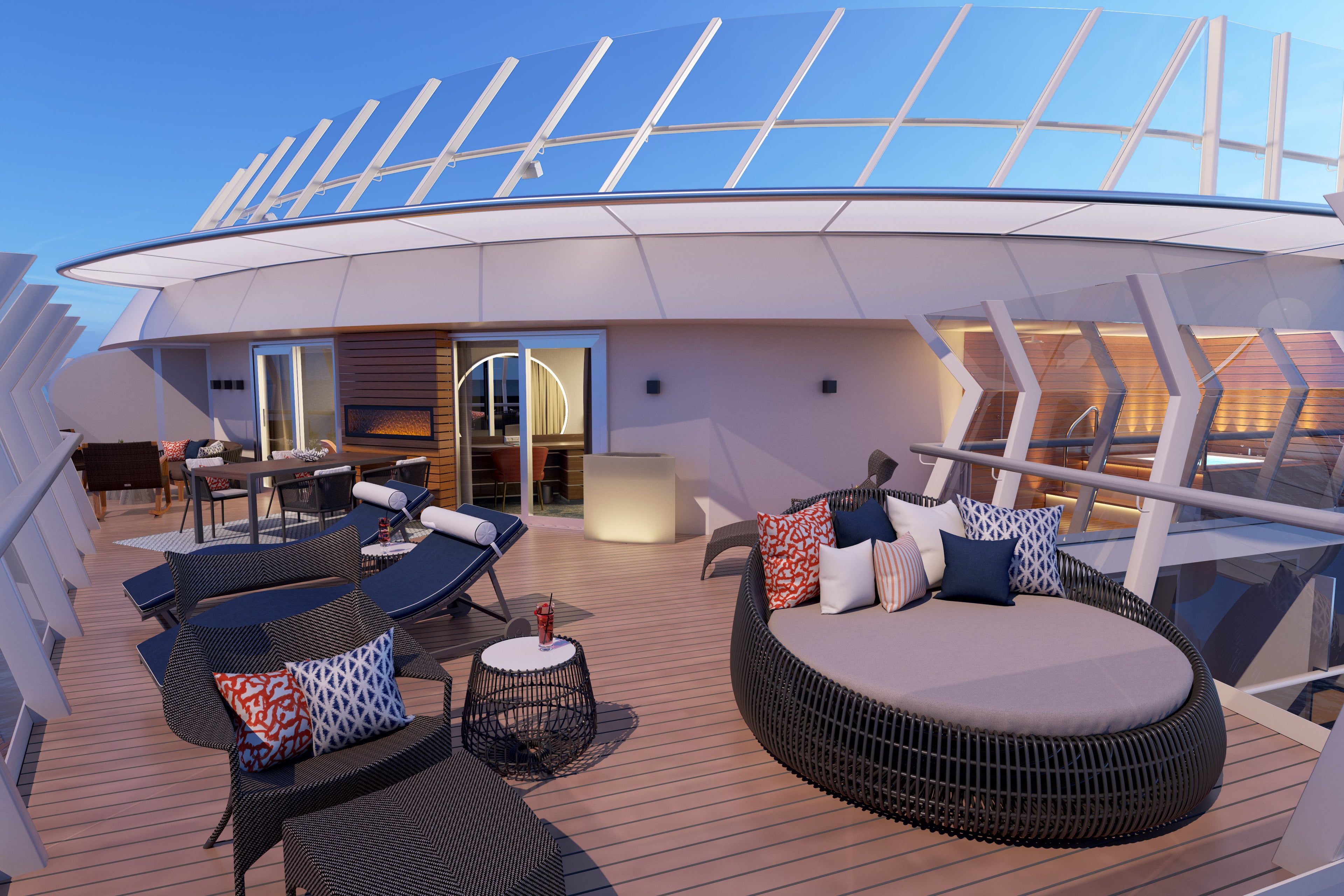 Carnival Is Going Big With Its Largest Suites Ever on New Ship
This post contains references to products from one or more of our advertisers. We may receive compensation when you click on links to those products. Terms apply to the offers listed on this page. For an explanation of our Advertising Policy, visit this page.

Carnival Cruise Line is going big with the suites on Mardi Gras, the giant new ship it has on order for delivery in 2020.

The 5,200-passenger vessel will feature two sprawling Presidential Suites that measure 1,120 square feet — bigger than any other accommodations in the line’s fleet — Carnival president Christine Duffy revealed on Tuesday at the Seatrade Cruise Global convention in Miami.

Located at the top of the ship on Deck 17, the complexes will have separate living and sleeping areas as well as the most expansive balconies in the Carnival fleet. Measuring more than 600 square feet, the balconies will feature a lounging area with a large sunbed as well as as a private outdoor hot tub and shower.

“That’s where I’ll be staying, hopefully, assuming our revenue management team allows me,” Duffy joked during the announcement.

Pricing for the Presidential Suites will start around $3,675 per person for a week-long Caribbean sailing. That's about five times the cost of a basic cabin.

While not nearly as big as the palatial, $11,000-a-night owner’s suite in the works for the next Regent Seven Seas Cruises ship, the new President Suites on Mardi Gras will be notable for Carnival, which never has been known for big suites. The suites will also mark a deliberate move by the line to offer more high-end accommodations on its ships.

Duffy said the Presidential Suites will be among 180 suites on Mardi Gras: the most ever for a Carnival ship. Carnival’s most recent series of vessels, the Vista Class, each offer cruisers fewer than 75 suites. The line’s earlier Conquest Class series of ships have around 50 suites.

Duffy said Mardi Gras would have 11 different categories of suites in all, four of which will be part of a new premium “Excel” category of suites that come with extra amenities and access to a new-for-the-line, resort-style enclave at the top of the ship called Loft 19.

In addition to the two Presidential Suites, the Excel suites will include a dozen 861-square foot Excel Aft Suites that overlook the back of the ship and boast separate living rooms and bedrooms as well as large wraparound balconies with hot tubs. Slightly smaller will be a dozen 710-square-foot Excel Corner Suites that will also offer separate sleeping and lounging areas and wraparound balconies. A step down are six smaller Excel Suites that will measure 614 square feet.

Passengers staying in all four categories of Excel suites will have access to a dedicated concierge phone line and guaranteed dining times at Mardi Gras’s extra-charge specialty restaurants (with the exception of Japanese eatery Bonsai Teppanyaki and the Chef’s Table). Other upgraded amenities for Excel suite passengers will include complimentary Bottomless Bubbles soda packages; room service and laundry service; sparkling wine upon arrival; and upgraded toiletries in bathrooms.

At 180,000 tons, Mardi Gras will be the world’s sixth-biggest cruise ship at the time of its arrival and by far the biggest vessel ever for Carnival. It’s named after Carnival’s first ship, which sailed for the line from 1972 to 1993.

Scheduled to kick off its inaugural season in Europe on Aug. 31, 2020, Mardi Gras will offer two sailings from New York in the fall of 2020 before moving to its permanent home of Port Canaveral, Florida.

Massive suites are just one way Carnival is going big with its newest vessel. The ship will be crowned by a deck-top roller coaster called BOLT: Ultimate Sea Coaster. The 800-foot-long attraction is a cruise industry first, and will twist around the ship’s funnel and hits speeds of nearly 40 miles per hour. Mardi Gras will also have a (very fitting) New Orleans-themed French Quarter lined with bars, restaurants and music venues such as a jazz club.