Articles
Judy Colbert is a Maryland-based award-winning travel writer/photographer with 36 books to her credit, including "100 Things to Do in Baltimore Before You Die" and the forthcoming 12th edition of "Virginia Off the Beaten Path."
Follow
Feb. 19, 2019
•
10 min read 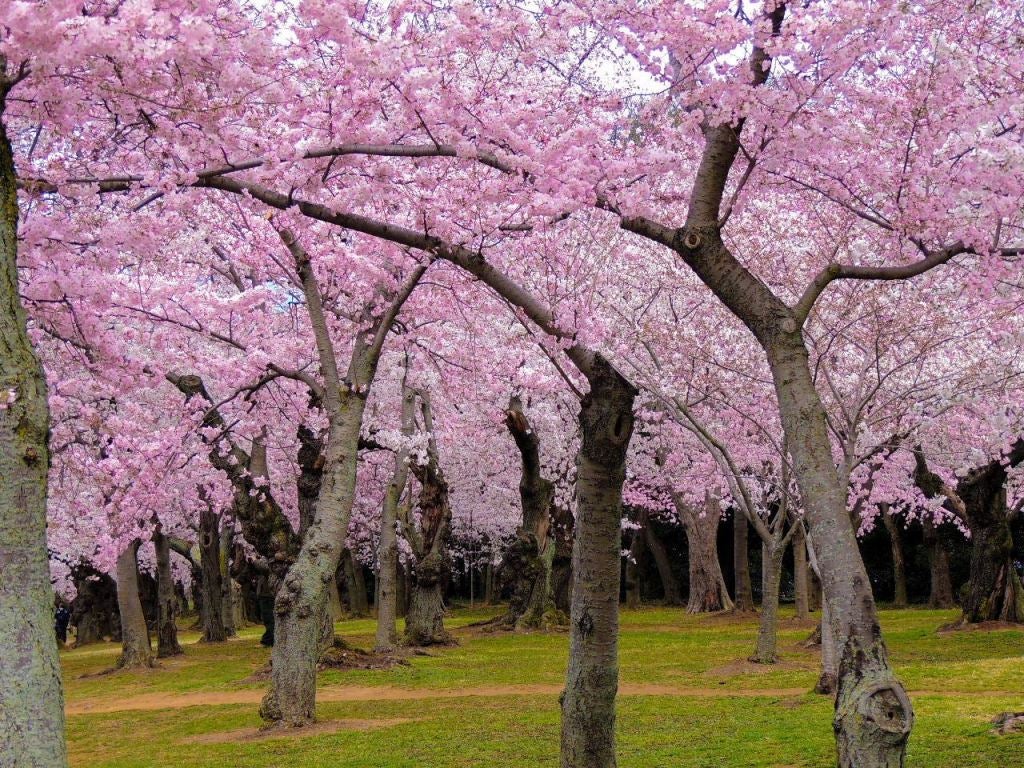 Soft pink and white petals create a magnificent cherry blossom display in Washington, DC. Beyond and among the blooms are the majestic monuments and memorials dedicated to Thomas Jefferson, Abraham Lincoln, Franklin Delano Roosevelt, George Washington, Martin Luther King, Jr. and our heroes from the Vietnam and Korean wars and World War II.

Stroll along the Tidal Basin, Hains Point and the Kenwood section of the city -- like TPG contributor Grandpa Points (Buddy Smith) did last spring -- and you’ll have a lifetime supply of memories and photos for your family greeting cards. The annual National Cherry Blossom Festival is held for three weeks from late March to early April and includes a joyous parade; a high-flying kite festival where children can make and fly kites on the grounds of the Washington Monument; and a 10-mile run, 5K run-walk and a kids run, among other activities. (March 20–April 14, 2019)

But the nation’s capital is not the only place to enjoy cherry blossoms. You can find cherry blossoms along the East and the West coasts. And because there’s a slight variation in blooming time from north to south, you may find one that’s at a more convenient time and location for you and your family. And, of course, if you've got a nice stash of miles and points, you should always take your family to Japan to see stunning cherry blossoms in Tokyo and Osaka. Though note that while the tips for planning a trip to see DC cherry blossoms are loosely applicable for all of these destinations -- Mother Nature is hard to predict and plan around.

Georgia Has More Than Peaches

Macon, Georgia’s International Cherry Blossom Festival lasts 10 days. More than 350,000 Yoshino cherry trees bring clouds of pinkness to springtime, which could easily make Macon, Georgia, the cherry blossom capital of the country. The Central City Park Festival started as a three-day event in 1982 under the auspices of the Keep Macon-Bibb Beautiful Commission; the family-friendly celebration features hundreds of events. Among the highlights are a K-12 art contest, free nightly concerts, cherry tree sale, lantern light tours, a pink pancake breakfast, wiener dog race, a bed race, heroes day at Central City Park and a parade. (March 22–31, 2019. Admission is $5 for adults and free for kids 10 and under.)

Where to Stay: Homewood Suites by Hilton Macon – North from 30,000 Hilton Honors points. Homewood is one of TPG Family's favorite hotel chains for families.

Vancouver Has Cherry Blossoms, Too

The Vancouver Cherry Blossom Festival highlights about 50 different varieties of more than 2,500 cherry trees that reach peak bloom throughout most of April. The family-friendly fair explores traditional and Japanese cultural arts, with loads of vendors and performers. Among the activities are a Haiku Invitational Contest, the Big Sing choral event, the Big Picnic (April 13 from noon to 3pm), tree talks and concerts. The Spring Lights Illumination takes place April 11–13 at the Stanley Park Japanese Canadian War Memorial, where the trees in Stanley Park are illuminated with vibrant projections created by local artists. If you want that perfect photo op, check the website for the trees’ location and stage of bloom. It's best to take public transportation to Queen Elizabeth Park. Ticket prices will be announced in March. Children under 3 are free. (April 4–April 28, 2019)

Where to Stay: The Category 5 Delta Hotels Vancouver Downtown Suites is available during the festival from 35,000 Marriott Rewards points. Here you could use an annual up to 35k award night from the Marriott Bonvoy Business® American Express® Card or Marriott Bonvoy Boundless Credit Card.

Head to Philly for a Riot of Blossoms

In the City of Brotherly Love, Philadelphia, the annual Subaru Cherry Blossom Festival has celebrated the return of spring since 1998. Among the weeklong citywide cultural celebrations include film screenings, kimono dressing, traditional dance and martial arts, ceremonial taiko drummers from Tamagawa University, a tea ceremony and two stages with live entertainment that culminates in Sakura Sunday at Shofuso Japanese House and Garden in Fairmount Park (one of the country’s largest urban parks). The near-forest of 1,600 sakura (flowering Japanese cherry trees) was planted in 1926 as a gift from the people of Japan in honor of our sesquicentennial. (Various locations, including Shofuso Japanese House and Garden, Lansdowne and Horticultural drives. April 6–14, 2019. Mostly free, though Sakura Sunday costs $15 for adults with children under 12 free.)

Where to Stay: Kimpton Hotel Monaco Philadelphia, right across the street from Independence Hall and the Liberty Bell, from 55,000 IHG Rewards Club points per night. Be sure your kids know the secret password to get a surprise at check-in if one is available during your stay.

The Japantown neighborhood of San Francisco is home to the Northern California Cherry Blossom Festival that draws more than 200,000 people each year over two weekends in April. Included in the festivities, started in 1968, are traditional music, dance and other cultural activities. Try Japanese and Japanese–American culinary treats (sushi, tempura and chicken or beef teriyaki) and revel in the Grand Parade (Sunday, April 21, 2019) that starts at 1 p.m. City Hall on Polk Street near McAllister and ends about two hours later at Japantown near the Peace Plaza. Most of the events take place on Post Street and include taiko drumming, tea ceremonies and traditional Japanese folk dancing. The Sanrio Kids Corner has Hello Kitty and her friends entertaining children. (April 13–21, 2019)

Where to Stay: The Holiday Inn San Francisco - Golden Gateway is a 15-minute walk to Japantown and can be booked with IHG Rewards Club points (from 50k per night). The IHG Rewards Premier Credit Card offers 80,000 bonus points after spending $2,000 on purchases within the first three months of account opening plus an additional 40,000 bonus points after spending a total of $5,000 on purchases within 6 months of account opening.

Japanese Culture in the Pacific Northwest

At the three-day Seattle Cherry Blossom & Japanese Cultural Festival, you can explore and experience the cultural roots and contemporary influences of Japan through free live performances, visual arts (shodo ink paintings, origami demonstrated by the Puget Area Paperfolding Enthusiasts Roundtable, temari silk threading, kibori woodcarving and more), foods and games. In 1976, then-Prime Minister Takeo Miki of Japan gave the city 1,000 cherry trees in honor of the country’s bicentennial. The festival is the largest and oldest of its kind in the Northwest. If you just want to see pretty blossoms, try Green Lake Park, the University of Washington Liberal Arts Quadrangle, Washington Park Arboretum and Mount Baker Park. (April 26–28, 2019)

Where to Stay: Embassy Suites Seattle Downtown Pioneer Square. With Wi-Fi and breakfast included, it's a great deal for families. Reward nights during the festival are available between 67,000 and 70,000 Hilton Honors points per night. Before your stay, read up on which Hilton credit card is best for family travelers. There are also some solid Hyatt options in Seattle.

While you can find Kwanzan and Yoshino cherry trees and blossoms in several places in New York’s Central Park in late April and early May, the big festival is the weekend-long Sakura Matsuri festival at the Brooklyn Botanical Garden. More than 200 trees in 26 varieties set the frame around the 60-plus family-oriented activities. You can participate in various workshops, visit the puzzle plaza, watch samurai sword master performances, Japanese dances, taiko drumming, ikebana flower arranging, cooking demonstrations, tea ceremonies, craft demonstrations, puppet shows, calligraphy art, displays of geta shoes, a kimono fashion show and meet manga artists as you learn about Japanese culture and history. (April 27 and 28, 2019. Admission is $15 for adults and $8 for seniors 65+ and students 12+ with ID. Kids under 12 and members are free; advance ticket purchase recommended.)

Where to Stay: TRYP New York City Times Square South is just 15,000 Wyndham Rewards points per night (that even includes a room that accommodates up to eight people!). Or, here are some other top picks for families in NYC. And, learn how your family can enjoy New York City without hitting the usual tourist traps.

Cherry blossoms can be seen across the country (and world), but timing your trip correctly can be a challenge. But it is a challenge well worth it if you can make it work! Has your family gone in search of cherry blossoms? Where did you visit?