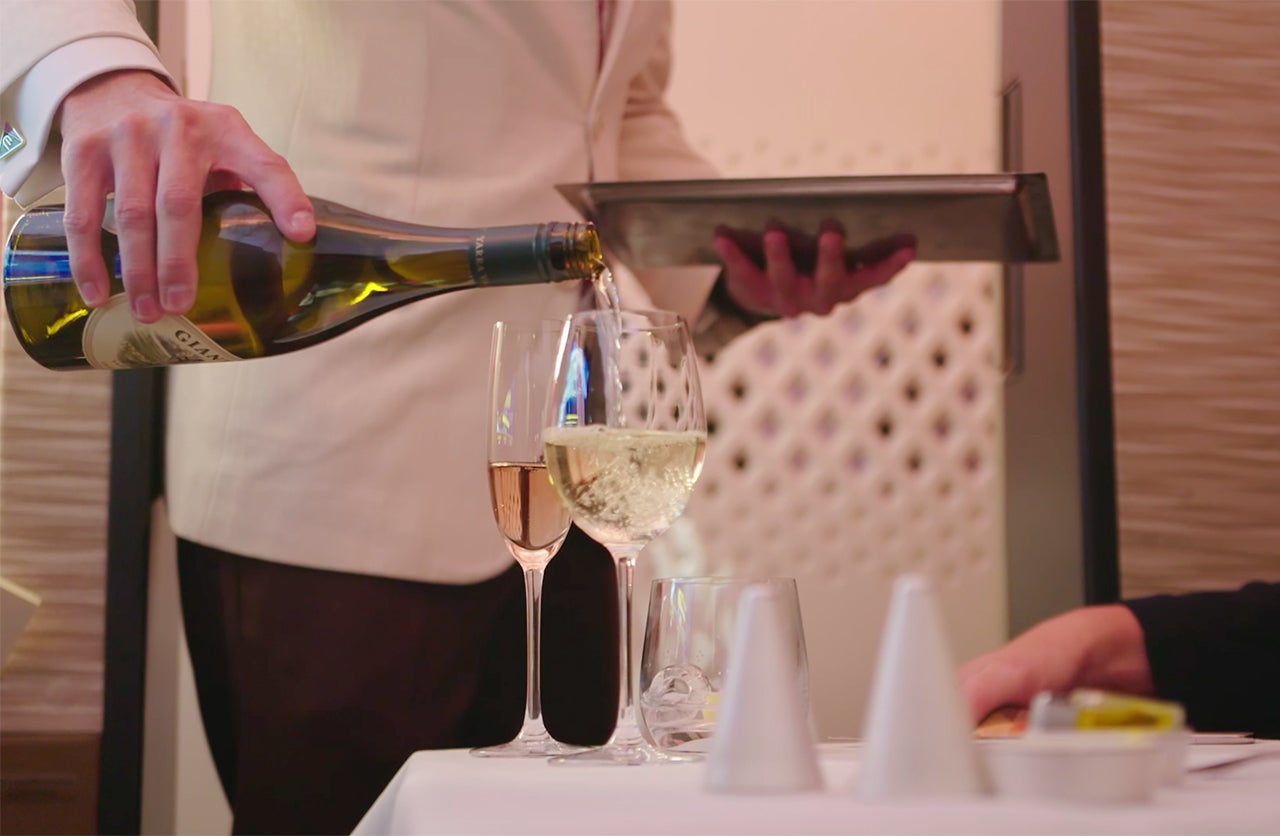 Generally speaking, the nicer the airline's product, the harder it is to find award space. While mainstream carriers like American Airlines and British Airways often make plenty of space available for frequent flyer awards, finding convenient space on carriers with top-tier premium cabins — like Emirates, Japan Airlines and Singapore Airlines — can be extremely frustrating.

There are a few exceptions, though, if you know where and how to look for space. These five airlines have been ranked by SkyTrax as 5-star, so they're supposedly the world's best. They also make abundant award seats available if you know how and where to search.

Why to fly: Japanese carrier All Nippon Airways (abbreviated ANA), has long been a gold standard in the airline business. While ANA doesn't tout over-the-top perks like onboard bars and showers, its aircraft are the cleanest I've ever seen; seating is exceptionally spacious and comfortable in any class of service; and the onboard catering is the envy of the aviation world.

Then there's the Japanese service, which is, well, Japanese service. There's nothing like it anywhere else in the world. You can expect a deep hip-drawn bow (or two, or three) at every encounter with a flight crew member.

Award availability: For a perennially top-ranked 5-star airline, ANA makes an unbelievable number of award seats available to Star Alliance partners, right when its calendar opens. ANA is a member of the Star Alliance, meaning awards can be booked from a huge number of programs, including Air Canada Aeroplan, Avianca Lifemiles, Lufthansa Miles and More and United MileagePlus. Flights can be combined with those on other Star Alliance airlines.

Here's a look at business-class availability 330 days out. The partner ANA awards are priced at the 80k level, and the query below was for two passengers.

And here's what first-class availability looks like on New York to Tokyo nonstops in the same timeframe, also for two passengers:

Why to fly: For whatever reason, Taiwanese airline EVA Air is often overlooked by travelers in search of luxurious digs. But make no mistake: The "Hello Kitty airline" is and has often been rated five stars. EVA, another Star Alliance carrier, has a good-sized network, and flies to six US cities — Chicago, Houston, Los Angeles, New York, San Francisco and Seattle — as well as to Toronto and Vancouver.

EVA does not offer first class, but it has equipped its long-haul 777-300ER fleet with comfortable reverse-herringbone business-class seats.

The seats are great, but it's the airline's Taipei ground operations and onboard service that propel EVA into the aviation stratosphere.

EVA pours premium champagnes in business, which it markets as Royal Laurel Class.

The airline also maintains a very spacious economy-class cabin on all long-haul aircraft.

Award availability: When it comes to finding award space, just look to the start of the calendar. EVA releases even more nonstop space than ANA. The query below was for 2 passengers.

Note that EVA Air's rival, SkyTeam member China Airlines, is also a fantastic operation, though it hasn't made SkyTrax's 5-star list. Award availability on China Airlines is good, but not quite as abundant as on EVA.

Why to fly: Abu Dhabi-based Etihad Airways operates the most expansive seat offering of any commercial airline, the Etihad Residence. The Residence is not so much as a seat as a New York City apartment. It has a separate living room, with a large-screen television and space for friends, a private restroom with shower and a separate bedroom featuring a full-sized bed.

While it's not possible to use any form of points to book The Residence, the rest of the airline doesn't disappoint, and Etihad regularly receives a SkyTrax 5-star airline ranking.

Award availability: Etihad also releases a somewhat incredible abundance of award seats within a few weeks of departure. It's possible to find Etihad seats throughout the year, with some luck, but close-in availability is uncanny as to almost be considered a sure thing.

You can search for Etihad awards on Etihad's website, although this has been made exceptionally complicated. Etihad is an Amex transfer partner, but you can actually score better redemption rates booking Etihad flights with Alitalia (another Amex transfer partner). Alitalia's "Award Ticket" search is slow, but pretty easy to use.

AAdvantage doesn't offer transfer agreements with any credit card programs, but is a Starwood Preferred Guest transfer partner (soon to be Marriott).

Why to fly: The largest of several privately owned Chinese carriers, Hainan has appeared more than once in the top "5-star" category of SkyTrax' airline quality rankings.

From Beijing, Hainan can connect you to over 90 cities. Hainan also provides service to other Chinese cities on Hainan from Los Angeles, New York and San Francisco.

The 787-9 business-class cabins are being refit with reverse-herringbone seats. Reviews have been, almost without exception, overwhelmingly positive (even before the move to better seats).

Award availability: There is one — and only one — way to book award seats on Hainan, and that is through Alaska's Mileage Plan program. Hainan Airways award flights appear in the "Use Miles" search on alaskaair.com. Just let your mouth water at this availability calendar in the peak middle of summer:

Business-class seats between the East Coast and Asia are 50,000 miles, the cheapest available through any program on a one-way basis. You can also search and book convenient connections to other Chinese cities and Asian cities like Bangkok.

But even if you were to book a Hainan flight and an onward Cathay Pacific or Japan Airlines flight separately to another Asian destination, you'd end up spending 75,000 miles for business-class accommodation, total. That's still a great value.

When booking separate connections, be prepared to carry on your luggage or go through the process of applying for a transit visa at the Bejiing airport, then collecting and rechecking your bags. Hainan won't transfer your bags to Japan Airlines. This transit visa and recheck procedure might make sense if one took the opportunity to explore Beijing for a day (or two, or three, or four).

You can rack up Alaska MileagePlan miles on a tremendous number of airlines, and the Alaska Airlines Visa Signature credit card is currently offering 30,000 miles plus a companion fare (with taxes and fees starting at $22) to new cardholders who spend $1,000 in the first 90 days. Mileage Plan is also a Marriott Rewards transfer partner.

Why to fly: Garuda Indonesia has long been included in SkyTrax 5-star ratings. The carrier operates three-class Boeing 777-300ERs from Jakarta to a number of destinations with SkyTeam connections including Amsterdam, Guangzhou, Osaka, Tokyo and Shanghai. The airline also offers 777 service to and from Los Angeles, via Tokyo.

While TPG's Zach Honig had a somewhat middling experience on Garuda's 777 business class between Jakarta and Tokyo a few years ago, contributor Sachin Mehta found the airline lived up to its reputation while flying in first class suites last January.

Generally, the online #AvGeek community has found that Garuda's onboard service lives up to its reputation.

Garuda availability can also be found on Delta.com:

You can book business-class awards one-way on Garuda Indonesia using Delta SkyMiles or Air France/KLM Flying Blue miles, the latter of which can be transferred from Amex Membership Rewards, Chase Ultimate Rewards or Citi ThankYou Rewards. In this case, though, SkyMiles offer a better value over Air France, at 80,000 miles compared 100,000. (Note that the Flying Blue award search was completed before the program updates went into effect — we're now seeing options from 90,000 miles — still higher than the Delta award rate, though.)

Aviation journalists have often been puzzled by the SkyTrax rankings, which use complex and proprietary metrics, synthesized from largely user-submitted travel reviews, to rank and classify airlines. Some of the airlines widely regarded as the world's best — Emirates and Qatar, for instance — are often absent.

SkyTrax raised eyebrows when it added Lufthansa, one of the largest airlines in the world, to the list in 2018. Lufthansa is renowned for consistent service, but installs high-density seating configurations on many of its aircraft that cramp comfort in economy and business class. Still, all of the SkyTrax 5-Star airlines offer impeccable service from well-trained staff in well configured and spotlessly clean airplanes.

With some planning, it's perfectly possible to score an award seat on one of these 5-star beauties.