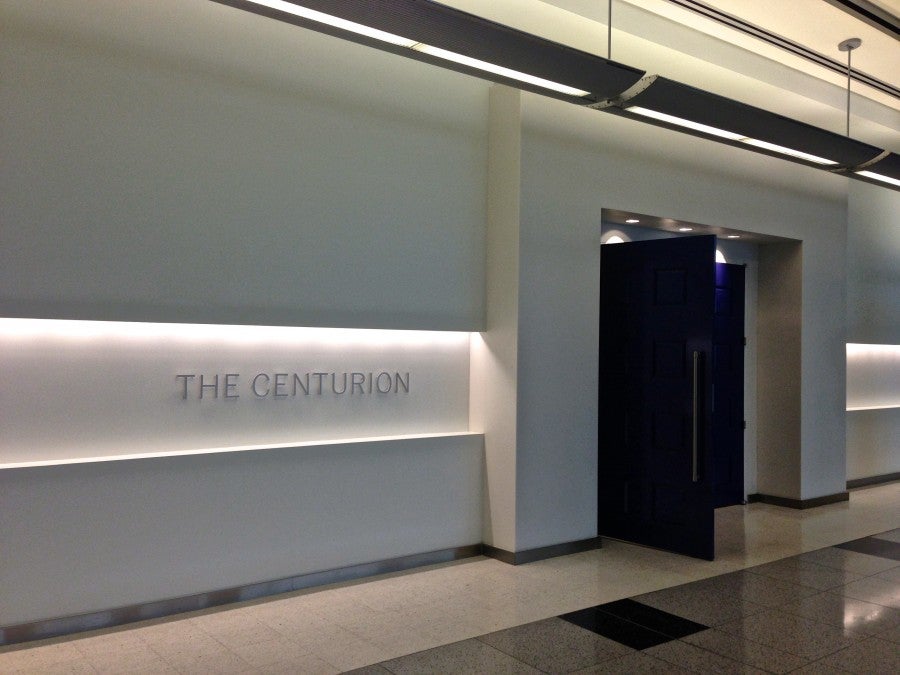 Inside the New American Express Centurion Lounge at Las Vegas McCarran International Airport
This post contains references to products from one or more of our advertisers. We may receive compensation when you click on links to those products. Terms apply to the offers listed on this page. For an explanation of our Advertising Policy, visit this page.

Domestic airport club lounges rarely get me excited, however I was interested to learn that American Express had opened a lounge at Las Vegas's McCarran International Airport on February 26, which is free for Amex Centurion (Black Card) and Platinum cardholders and $50 for anyone with a valid American Express Credit or Charge card.

Is it worth it? TPG reader Dave White was one of the first people to get in there for a free tour, and he sent us his thoughts as well as a gallery's worth of photos, so I'll let his pictures do the talking.

Here's the entrance in the D Concourse across from Gate D4, while just inside is the welcome desk shown here. The lounge is open from 5:00am until midnight.

Dave got a welcome gift bag stocked with L'Occitaine amenities, which the lounge also stocks in its shower suites.

Then he headed to the breakfast buffet.

All food and drink is free, including the liquor, though Dave just had some freshly squeezed orange juice with his eggs and the cinnamon French toast. Dave said, "My favorite dish was their gourmet French toast with apple cinnamon topping. The fruit bar to the right of the hot breakfast is also very fresh. It's well beyond what you'd get in any Delta or American lounge."

Here are some of the tables from the dining area. The food menu actually comes courtesy of Amex's partner celebrity chef, Scott Conant of Scarpetta. A look at the sample menus reveals dishes like quinoa salad with cashews and cranberries later in the day, and desserts like salted caramel budino.

And here's a shot of the swanky bar where the cocktail menu has been created by Amex's Centurion Lounge Mixologist, Jim Meehan, who has done time behind the bars at Pegu Club and Gramercy Tavern among other watering holes; and the wine list was selected by Centurion Lounge Wine Director Anthony Giglio.

When describing the lounge, Dave said, "It feels like being in a art gallery or a fine coffee shop. You definitely don't get that 'airport' feeling."

It does look somewhat Mad Men-ish in there, and here's another shot of the main lounge area.

With plenty of individual seating areas interspersed throughout - some with great tarmac views.

I wouldn't mind hanging out here for a while. In terms of workspaces, the lounge has a first-come first-served conference room, and there are also workspaces, Samsung computers for guests to use, and all-in-one printers.

Families have the option of spending time in the Family Room, which has video games, a television, books, movies and toys.

Beyond the decor and the food, other perks in the lounge include free high-speed WiFi as well as tablets and headphones for entertainment available to borrow from the front desk.

Although the Centurion Lounge site promises more locations to come in 2013, for now, the one at McCarran is the only one, which Dave corroborated. "I asked about other lounges they intended open worldwide," he said, "and none of the employees had any information available as to which city or cities were next on AMEX's list. One of them hinted though, that this lounge may be it through the end of the year, and that AMEX would then build out other lounges based on how well this first one does."

Access
Per our official contacts at American Express:
· Global Centurion Cardmembers and their invited guests (immediate family (spouse or domestic partner and Cardmember’s children under 18) or up to two (2) guests) will receive unlimited complimentary access to the lounges as part of their card benefits.
· All other American Express Cardmembers (who hold a valid American Express credit or Charge card product)
Can purchase an access key at the lounges, space permitting. An access key will cost $50 per person, per day. Cardmembers who purchase an access key may be accompanied by Cardmember’s children under 18.
o We will also provide a number of Cardmembers with complimentary access to the lounge through a series of targeted offers. These tests will enable us to monitor and manage lounge capacity, learn which features are most valued and ensure that everyone has the best possible experience when they visit our lounges. We may also use the findings of the tests to modify our lounge access policy over time, especially once the test phase has been completed.

As more and more cards start offering higher-end benefits including airport club lounge access, it looks like Amex is trying to up its game to stay competitive and offer its cardholders a lounge that's a cut above the rest. While it wouldn't necessarily be enough to get me to apply for a certain card (Amex- I'll take the Centurion if you waive the fee!), I do think the effort is interesting and the lounge looks pretty cool, so next time I'm passing through Las Vegas, I might just swing by.

Have any others of you had a chance to check it out? Share your impressions below.
[card card-name='The Business Gold Rewards Card from American Express OPEN' card-id='22034407' type='javascript' bullet-id='1']

Featured image by The entrance to the lounge.