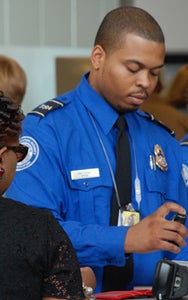 News We Already Knew: TSA Gets Negative Reviews From Frequent Flyers
This post contains references to products from one or more of our advertisers. We may receive compensation when you click on links to those products. Terms apply to the offers listed on this page. For an explanation of our Advertising Policy, visit this page.

Update: Some offers mentioned below are no longer available. View the current offers here – The Platinum Card from American Express

According to a recent poll in Frequent Business Traveler magazine that was conducted in partnership with FlyerTalk, an overwhelming 85% of frequent travelers give the TSA a big thumbs down. Well, to be specific, 85% of poll respondents said the TSA was doing a poor or fair job, with just 15% giving the TSA a positive review. The survey polled 2,415 people between August 9 - September 10, 2013.

Digging down into the numbers a little further, 66% - two thirds - said that the TSA's procedures were not effective at preventing a terrorist incident on an aircraft and just 1.2% of those polled said the TSA was very effective at doing so.

Although 45% of those polled said they were not satisfied with their most recent security experience, I actually thought that number would be higher based on the other responses, but a lot of people abstained or were neutral since just under 30% were satisfied.

What was also interesting is that the cross-section of people polled must have been a bit rarefied since 45.9% of the pollees had used TSA PreCheck, which is a high proportion compared to the general flying public, and what piqued my interest here was that over 80% of those people were satisfied by the experience.

Despite the low numbers, the TSA actually improved from a similar poll conducted last year (last year, 5% more people said the TSA was doing a poor job at screening), though the perceived effectiveness of the agency's procedures toward preventing terrorism actually dropped 10% from last year. This year's respondents also included 10% more people who had experienced TSA PreCheck and of those people 7% more this year said that their PreCheck experience was positive.

So overall it looks like the majority of the flying public still finds the TSA to be bad at its job - it's probably all those long lines snaking through airport terminals, having to strip practically to your underwear and remove pretty much everything from your carry-on before being put in a body scanner like the chamber that stole Superman's powers before being let on your plane - a disheveled, demeaned mess.

But the good news is that TSA PreCheck is actually working better than ever (at least in people's opinions) and making the security process a lot easier. Personally, I love PreCheck as well as the government's other Trusted Traveler programs like Global Entry (which I got for free thanks to my Platinum Card from American Express), and find them to be time-saving measure that actually make my airport experience quite pleasant. But what do you think?

Featured image by Expect security lines to get a lot longer if budget cuts go into effect.