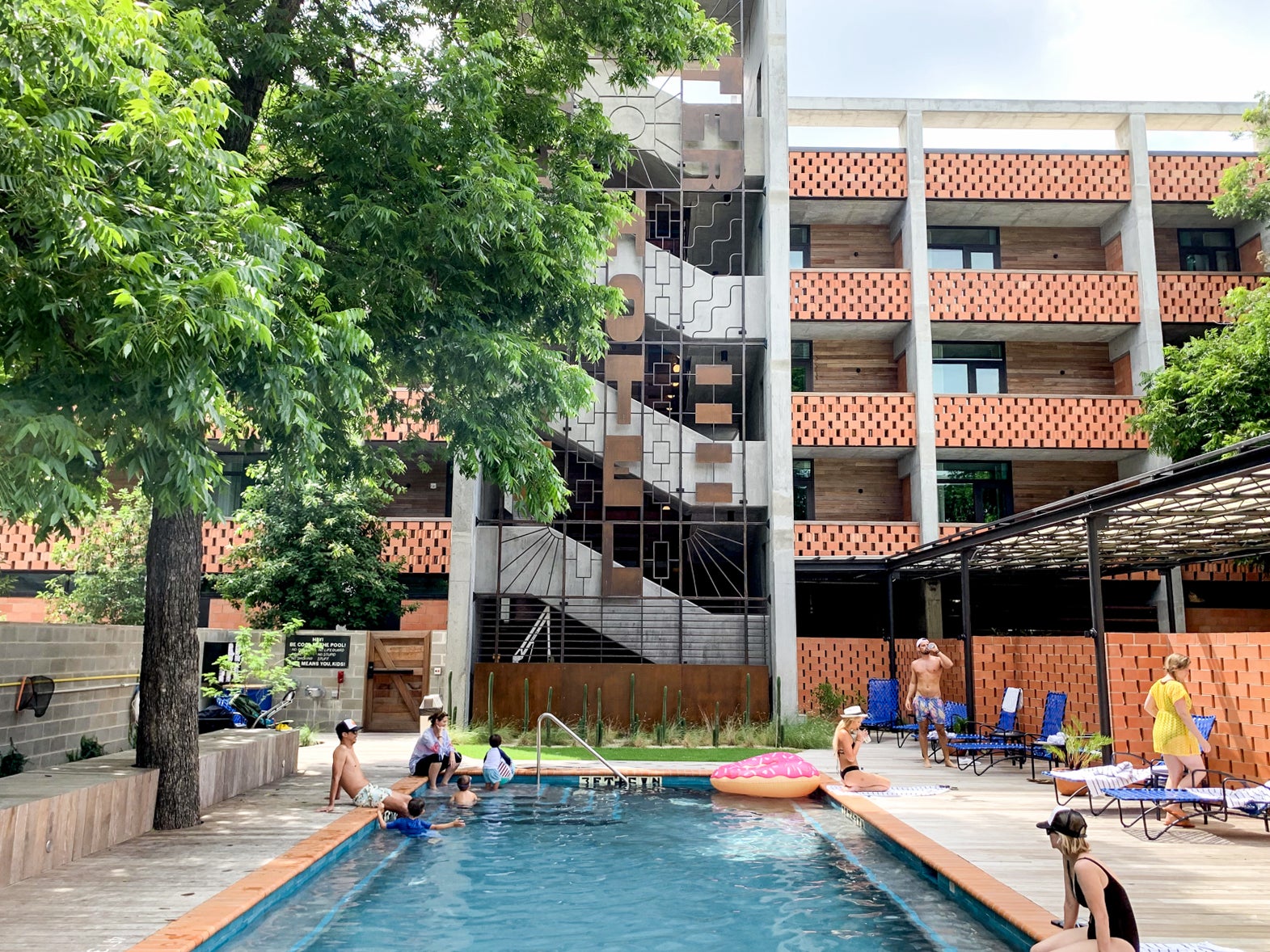 My first trip to Austin, Texas, the land of breakfast tacos and SXSW, was to visit recently transplanted New York City friends. So while most of my trip would be spent at their beautiful but slightly suburban home, my friend and I decided we needed one night out in Downtown Austin, no driving required. Plus, the brand-new Carpenter Hotel had a pool where we could take her kids to splash around in the afternoon heat.

Finally, to be honest, the photos just made it look super cool, and who doesn’t want to stay in a new hotel from the Mighty Union, a group made of Donald Kenney, general manager of the Ace Hotel Portland; Jack Barron, a partner in Ace Portland and Ace Hotels; and Jen Turner, the designer and architect; all partnered with Andrew Knowlton, Bon Appetit’s former restaurant editor, and Christina Skogly Knowlton, who oversees the food and beverage programs.

As an independent hotel, the Carpenter has no rewards or loyalty programs. (Yes, it did just open in November 2018.) I booked using my Capital One Venture Rewards Credit Card through Hotels.com/Venture to get those sweet 10x miles. Oddly, the listing only appeared every other time I looked at the site, so I alternated between, “OK, I’ll book,” and “Oh, sugar! It’s gone.” It was all very dramatic, but it turned out the first weekend in June was high school-graduation weekend, so rates were slightly higher than expected at $270 for the Simple Room with one queen bed.

This union hall-turned-hotel is close to everything but exactly near nothing. The hotel describes itself as being "nestled in nature in a century-old pecan grove at the edge of iconic Zilker Park and Barton Springs," which is code for "not Downtown and not on South Congress."

There's a homey wine bar nearby, but other than that you'll probably need to call a car to head even down the road. We decided to hoof it to dinner a half mile away and were the only ones on an intermittent sidewalk.

Posted check-in time was at a shockingly late 4pm, but with big plans for a few pool cannonballs, I called the day before to see if early check-in were available. The agent who answered the call assured me that a room would definitely be available by 2pm and if we wanted to show up early, we could still use the pool.

When we rolled up, we quickly found street parking and plugged the meter with $3. Check-in was in the repurposed 1948-built carpenters union Local 1266 building along with the on-site restaurant, Carpenters Hall, and coffee shop, Hot L Coffee. The front desk felt like a bank-teller window, and there were four 20-somethings at computers behind the window. One helped me within seconds.

Pro tip: There’s a free parking spot directly in front of the hotel to use while checking in, and then there’s a free lot around back. But because we just needed the spot for the afternoon, we left the car parked on the street.

All 93 rooms were in the brand-new terracotta brick building behind the former union hall. To reach the four-story structure, we walked past the restaurant and outside past the dining patio and pool. Laden with bags, we took the elevator to the third floor, and Room 312 was directly behind the elevators’ mechanical room but in the middle of the open-ended hallway.

Every room had a terrace, and ours overlooked the pool and open-air staircase. (We did make awkward eye contact with a few folks headed to the fourth floor while we sat outside on the two black plastic-and-metal folding chairs that could have been stolen from your uncle’s yard in the ‘90s.)

Inside, there was exactly everything you needed, nothing extra: a low shockingly comfortable bed in a Pendleton-inspired striped blanket and the appropriate number of pillows (four) and flanked by the tiniest of nightstands, each in front of an outlet, a table with two chairs and a wall-mounted lamp, and a gauzy curtain-covered “closet” where the minibar, TV and a few hangers were. Instead of useless blackout curtains, there was a sliding steel door.

The bathroom was done in an iridescent blue tile. Frosted-bulb lights flanked the mirror, preventing those horrible downcast shadows. The walk-in shower felt like someone had actually used a walk-in shower before: The shower head was set back far enough that the spray couldn’t get out, but even if by some nightmare it started to flood, there was a high-enough lip to keep the water actually in the shower. And, in simple pleasures, there was an actual hook at the far end so you didn’t go dripping across the room to retrieve your towel. Bless you, Jen Turner, you’re doing the Lord's work.

Having eaten our weight in barbecue for lunch, it was time to work up an appetite in the pool. A small food menu could have been ordered from a red phone near the pool towels. The crudités ($6) seemed to be popular with other guests. Eventually, we ordered an Austin Beerworks pale ale ($6) and two Monikai fizzy rosés ($7 each), and delivery of the three cans took long enough for us to forget what we’d ordered, which was surprising. (Other pro tip: Just grab a beer from your minibar. It’ll be faster and cheaper. The beers clocked in at a reasonable $4 in room.)

The on-site restaurant, Carpenters Hall, seemed to attract more local diners than guests, and the hotel felt less than full. We stopped by for a cocktail and a bar bite before going out, and even in early evening, the open dining room felt bright, thanks to large windows and blonde wood throughout. My gin-based Bee’s Knees and my friend’s Oaxacan Old Fashioned were both delicious, and our first bean dip of the night hit the spot, but honestly the best part of the meal was that we could chat in normal tones thanks to sound-dampening panels on the ceiling.

In the morning, we first made pour-over ($2 each) in the room, which was delicious but having two pour-over coffeemakers instead of one would certainly speed the process up. Still feeling sluggish, we turned to Hot L Coffee.

A selection of pastries and two breakfast taco options were available, in addition to every type of coffee you could need. (The neon sign out front reading "HOTEL COFFEE" with the first "E" flickering really explains the wordplay.)

The iced coffee was perfect, and the migas breakfast taco was a lifesaver.

The pool was the centerpiece of this hotel, with the four-story steel logo stretching up the sleeping quarters' staircase. Toss in a couple hotel-provided floaties and you had Instagram bait. (Apologies to all the sunbathing 20-somethings who got splashed after I taught a 7-year-old how to cannonball.) But those looking for a workout on vacation (who are you?) should look to the nearby greenbelt for running, hiking and stand-up paddleboarding. The next closest thing to an amenity, besides the on-site dining, was a large Quonset hut that could be rented for events.

As my now-local friends opined, “Well, I wouldn’t recommend my parents stay here -- or really anyone over 45 -- but it's nice.” The Carpenter Hotel really is beautifully designed, from easily incorporating the repurposed union hall to the consistent earthy color palette and retro design scheme.

But despite the cool exterior, it’s obvious a lot of thought was put into the details. A walk-in shower that doesn’t leak all over the bathroom and a cool restaurant where you want to eat and are able to talk to each other go a long way to show that the owners actually care about hospitality, not just aesthetics.

Featured image by (Photo by Alyssa Haak / The Points Guy)
Editorial disclaimer: Opinions expressed here are the author’s alone, not those of any bank, credit card issuer, airline or hotel chain, and have not been reviewed, approved or otherwise endorsed by any of these entities.