Articles
Christine Gallipeau is a coordinating editor for TPG, where she edits content across the site and works with writers to perfect their stories. She was previously a senior travel editor at U.S. News & World Report before joining the TPG team in 2021.
Follow
June 17, 2022
•
9 min read 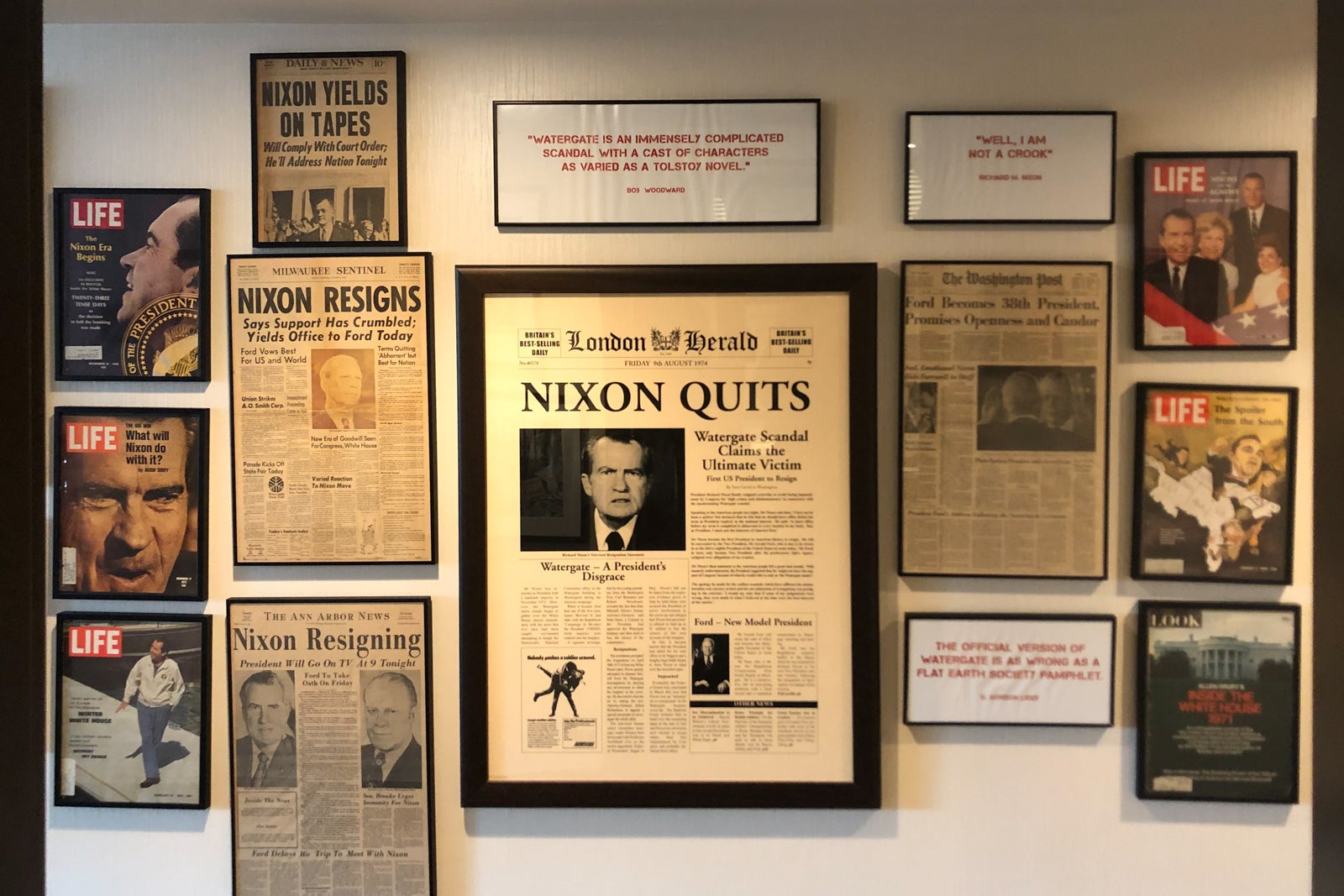 In a city full of historical buildings, it takes a lot to stand out from the rest. Yet the infamous Watergate complex does just that in more ways than one.

A drab fixture of an otherwise stunning skyline full of marble-clad monuments, charming brick buildings and an expansive performing arts center, the six towers of Washington, D.C.’s Watergate complex are far from appealing to the eye.

The curved design incorporated throughout to maximize views of the surrounding parks and adjacent Potomac River is no doubt interesting. But the cold concrete facade and chunky balcony railings — which look more like bottom rows of teeth than railings outside highly sought-after condos, mostly occupied offices and luxury hotel rooms — feel out of place in a city packed with architectural treasures.

Nevertheless, the eyesore of the Potomac occupies a prominent place in our nation’s history because of what transpired within its walls 50 years ago: the failed break-in of the Democratic National Committee’s former office.

While the Watergate scandal of June 17, 1972, took place more than 15 years before I was born, as a resident of the DMV — D.C. and its Maryland and Virginia suburbs — for the past seven years and a self-professed history nerd and political junkie, I’ve long wondered what lay inside this ugly complex I’ve passed more times than I can count.

Can a five-star hotel really incorporate the building’s ties to the political crime of the century in a tasteful way while offering luxe amenities and an upscale atmosphere that somehow mesh with its uninspired exterior?

After years of curiosity, I decided to book a one-night stay where the break-in was orchestrated — Room 205 (aka the Scandal Room) of The Watergate Hotel — to find out.

A glamorous flashback to the 1970s

From the moment you step foot inside the Preferred Hotels-affiliated Watergate Hotel, you feel instantly transported to another era.

Instead of heavy materials in uninspired hues, the hotel lobby features a mix of bold design elements with a midcentury modern flair, such as a long brass reception desk and a cool bar with bright red chairs and a curved wall of empty glass bottles.

I immediately found myself forgetting about the dreary exterior while checking in with the front desk agent. It surprised me, though, to find no nods at all to the property’s past, as I’d enjoyed listening to a recording of a Vietnam War-era speech by former President Richard Nixon while on hold with the hotel during a call a couple of weeks prior to my stay.

I had assumed similar details would be evident when I arrived. However, it wasn’t until I looked at my room key after checking in that I discovered my first break-in reference: “No need to break in” was printed on the front side.

Inside the (in)famous Scandal Room

After checking in, my husband and I made our way to the elevators. Following a quick ride to the second floor, we turned left down the hall, which featured retro touches like red-patterned carpeting and curved ceiling details, and walked until we found our room a few doors down on the left.

Admittedly, I was a bit underwhelmed at first. Nothing outside the room gave away what lay inside. Had I not booked Room 205 (formerly Room 214 at the historic property) and known the significance of it, I would’ve walked right past it unaware of what was inside. But since the room was ours for the night, I stopped, swiped my keycard and entered.

From the minute the door opened, I found myself captivated by all the historical details inside. Newspaper clippings, White House photos, famous Nixon quotes and even copies of official resignation documents lined the entryway.

I quickly got lost in the articles hanging by the door, scanning the Watergate stories on display to soak up as much as possible about the break-in, the subsequent impeachment hearings and Nixon’s departure from office.

With some encouragement from my husband, who knew that we’d never make our dinner reservation if I got too deep into reading, I moved past the hall and into the main room.

My eyes were immediately drawn to the antique desk at the far end, which looked like it’d been pulled straight out of an office from the 1970s. Old-school desk accessories, including a red stapler, a Rolodex and a mint green manual typewriter, sat atop the vintage piece of furniture alongside a reel-to-reel tape recorder, an homage to the Nixon White House tapes that ultimately swayed Nixon’s decision to resign.

A Crosley Dansette Bermuda Turntable also stood propped up nearby, though I quickly moved on from it once I discovered the flimsiness of the “records” and realized I wasn't able to play them on the '60s-inspired record player.

Eventually, I caught a glimpse of one of my favorite room features: the safe next to the bright red sofa. An unexpected find in the Lyn Paolo-designed room — whom you may know as the costume designer for TV shows like “Inventing Anna,” “Little Fires Everywhere” and, of course, political dramas like “Scandal” and “The West Wing” — the vintage piece from Mosler Safe Company was just as hefty to open (and close) as it appeared. I found myself moving the door position for at least 10 minutes, fascinated by the look and feel of the piece.

Throughout our stay, I marveled at the incredible attention to detail evident everywhere I turned. From the spy novels and copy of the Pentagon Papers on the bookcase to Nixon quotes printed in faded ink on the typewriter’s roll of paper, no detail was overlooked.

Even the coasters by the bed featured a playful nod to the building. In a quote about Watergate architect Luigi Moretti, the coasters revealed that many in D.C. criticized the design of the complex when Moretti first presented it, saying it was “as appropriate as a strip dancer performing at your grandmother’s funeral.”

If that’s not a fun detail, I don’t know what is.

What to know before you book

My stay in the Scandal Room was memorable, without question, for a few reasons.

While the room itself was fantastic and full of one-of-a-kind touches you’ll only get at this hotel in this specific room, know that there’s a high cost to experiencing the space in this way.

My one-night weekend stay in Room 205 set me back a whopping $1,698.97, including $220.97 in taxes and a $29 “urban resort fee” charge. Because my stay was so short, I didn’t get a chance to use the pool, 24-hour fitness center, loaner bikes or other amenities covered in the resort fee, but admittedly, they’re not ones I’d likely take advantage of during a longer stay anyway.

Even after factoring out the excessive resort fee for services I couldn't care less about, the total for the room was tough to swallow. I rarely spend more than $450 a night for a room anywhere I travel, and those bookings typically come with some added perks like complimentary breakfast (or snacks) and room upgrades thanks to my elite status in the Marriott Bonvoy and IHG One Rewards programs.

Although I did receive free internet access as a result of my entry-level Insider status in the I Prefer Hotel Rewards program, that perk did little to soften the blow of the Scandal Room’s nightly rate.

Fortunately, I later learned that there’s another way to access Room 205 for a lot less. Rather than stay in the Scandal Room itself, you can reserve a much cheaper Superior Room (which can be booked for as little as $240 per night on select dates this summer) and request a free tour of the Scandal Room. While tours are only available when Room 205 is unoccupied, the room’s high price tag means there’s a solid chance the space will be vacant when you visit.

Despite 50 years passing since the infamous break-in that took place at Watergate during the Nixon administration, the incident remains a fascinating piece of American history.

Seeing the Scandal Room for yourself — whether through a free tour or a paid stay — is an “only in D.C.” experience worth having. Know, though, that there are other ways to learn more about that pivotal political moment if you’re unable to stay at The Watergate Hotel.

The Smithsonian Institution’s National Portrait Gallery, which you’ll find in D.C.’s Penn Quarter neighborhood, is offering a temporary exhibit titled “Watergate: Portraiture and Intrigue” featuring a collection of visuals depicting the politicians linked to the break-in. It’s on display until Sept. 5.

And across the country in Southern California, you can check out Yorba Linda’s Richard Nixon Presidential Library and Museum, where a permanent gallery about Watergate delves into the history of the event.

Featured image by (Photo by Christine Gallipeau/The Points Guy)
Editorial disclaimer: Opinions expressed here are the author’s alone, not those of any bank, credit card issuer, airline or hotel chain, and have not been reviewed, approved or otherwise endorsed by any of these entities.