Embrace the (Slow) Pace: A Review of The Principal Hotel in Madrid

Articles
Nick Ellis joined The Points Guy in 2016 as an intern and is now Reviews Editor, primarily responsible for arranging, writing (some of), editing and publishing reviews of hotels and airport lounges along with helping manage, write and edit travel content.
Follow
Oct. 20, 2018
•
12 min read 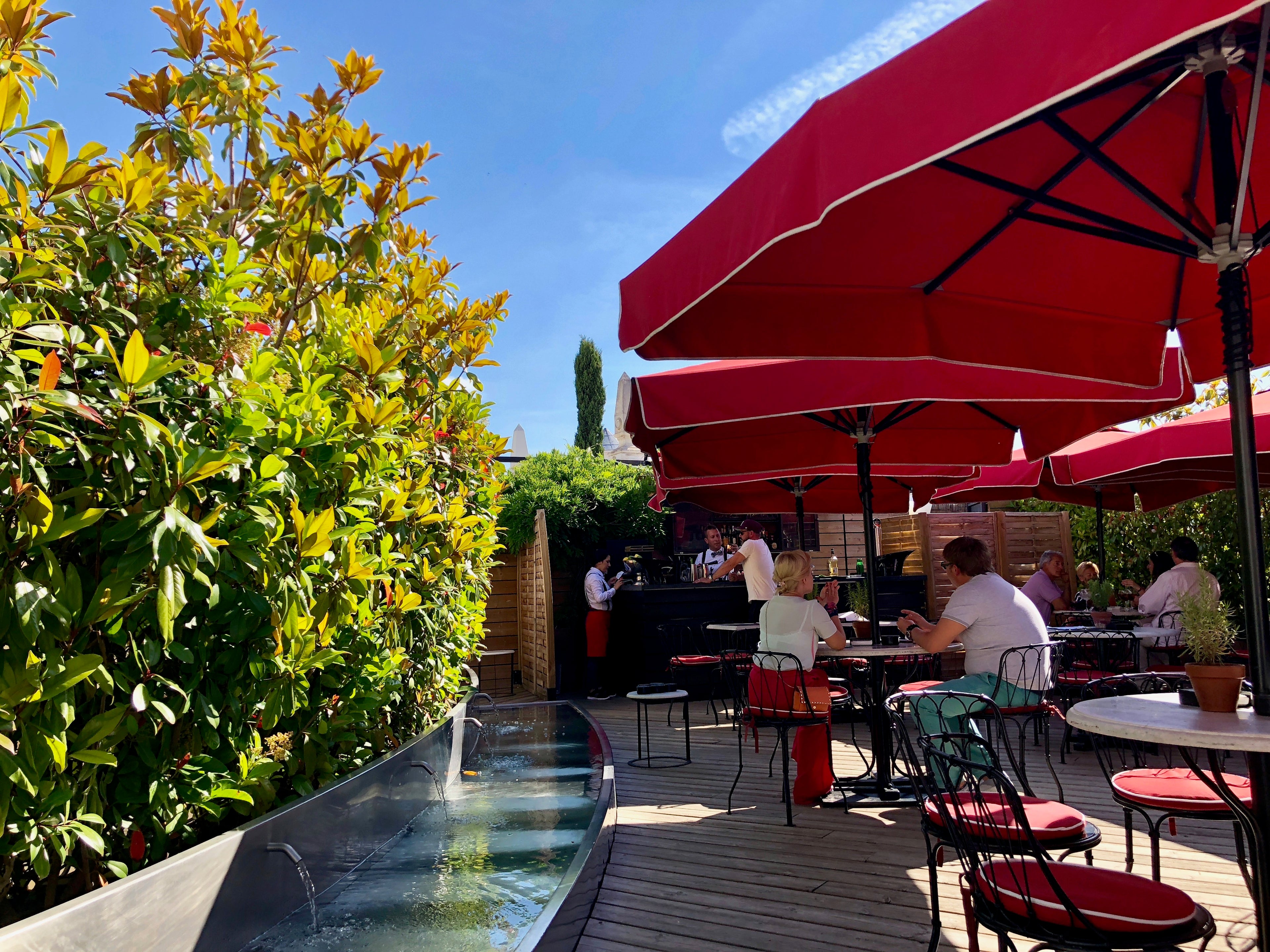 When several TPG team members traveled to Madrid, Spain, for a TPG contributor's wedding during the summer, the first thought on everyone's mind was "Where do we stay?!" Although many on the team have had good experiences in the past at the Westin Palace Madrid and TPG himself had an amazing experience at the AC Santo Mauro a few years back, we were itching to try the city's newest Starwood (now Marriott) property, The Principal Madrid, which opened its doors a couple years ago (don't worry, we'll be back in 2019 to test out the W Madrid).

Usually, paid rates for high-end hotels in Europe during the summer months are quite high. Surprisingly, though, summer rates at The Principal weren't so horrendous. For the dates I needed to stay, executive rooms (the lowest category) were going for $390/night, both directly on the former SPG site as well as hotels.com. Since I was staying four nights, though, and since I didn't want to burn through a stash of SPG points before it combined with the Marriott Rewards program, I decided that the best way to go would be to book with my Citi Prestige card in order to take advantage of its 4th night free benefit. In total, I paid $1,173 for the four-night stay, after the 4th night free credit was applied. In the process, I earned a respectable 3,519 ThankYou points, which are worth about $60 according to TPG's latest valuations.

One of the things I love about Madrid is its proximity to Barajas Airport (MAD). The hotel was just 20 minutes away by car, but getting to the city via the Airport Express bus or the Metro was just as easy. The Principal's prime spot on Gran Vía, the Spanish capital’s main thoroughfare in the trendy Chueca neighborhood, was hard to beat. So was the fact that the hotel was adjacent to one of Madrid’s most iconic (and beautiful) buildings, the Metropolis Building.

Given its central location, the hotel wasn’t far from the city’s main attractions, spots like El Retiro Park, Puerta del Sol and Plaza Mayor. With endless options for tapas and drinks within walking distance, I could easily get around by foot, and there was plenty of public transport, including Uber, Cabify and taxis if I needed to visit spots farther away.

The hotel’s main lobby was on the sixth floor, so when we came in off the street we were greeted by a small elevator lobby about 20 stairs up from ground level.

There were two tiny elevators in the downstairs lobby that could take us up to the sixth floor for check-in — it was a tight squeeze even with just me and one suitcase. The wait for an elevator was always at least a few minutes, but the building was an old palace, so this made sense. It was Spain after all, so instead of getting frustrated like I would at home in New York City, I embraced the relaxed cultural vibe and decided to not feel rushed. That made everything a whole lot easier.

Once I arrived on the sixth floor, the space really opened up. Two check-in desks were in the middle of the lobby with two distinct spaces flanking them.

One side housed the hotel’s restaurant, Ático, by Spanish chef Ramon Freixa. The other side was a bar and lounge called La Pergola. The bar had both indoor and outdoor seating, the latter of which overlooked Gran Vía.

The friendly desk agent located my reservation quickly and gave me the keys to my room on the fifth floor — the bellman had already taken my bag to my room, so this time I didn’t have to use the tiny elevator. I just walked down one flight of stairs and was at my room in no time.

Because The Principal is an historic property, each of the 76 rooms differed slightly. Since there was a group of us in Madrid, we booked several rooms, meaning each of us stayed in a unique room. I was booked into an executive room, the hotel’s base category.

The only thing basic about the room was the lack of view. The two large windows looked right into the interior of the building.

The lack of view was the only complaint I had with my room, though. The space was large and beautifully designed with modern grays and blacks throughout — my favorite color scheme. It featured a separate sitting area with a large couch as well as a desk.

The king bed was comfortable and fitted with crisp, white linens, and I slept well on each of my four nights. A Nespresso machine is always a nice perk, too.

Though the hotel building itself was very old, the rooms were renovated with the 21st century in mind: The rooms featured international outlets and Bluetooth connectivity, so you could play music through the speakers built into the room. This is a feature that other hotels should mimic.

The bathroom continued to represent the room’s smart, modern design.

Predominantly black, it featured a separate WC, a single vanity and a fantastic shower with three shower heads and great water pressure. The toiletries were by La Finca Gayeta, a brand I hadn't heard of before (not surprising, given we were in Spain). They smelled delightful, too.

Kate O’Brien, TPG's director of business development, was booked in a premium room, the next category up. Her room featured the same attractive design elements, king bed and separate sitting area, but had one notable advantage — an amazing view. It looked directly at the Metropolis Building, and yes, the gold on the top of the building is actually 24 karat!

Adam Kotkin, TPG's chief of staff, stayed in the next room category up, a superior room. His room was slightly larger than both mine and Kate’s, but it was on a lower floor and didn't have a particularly great view. It did, however, feature a separate bathtub in addition to a shower.

TPG stayed in the Gran Vía Suite, a 538-square-foot room that featured two different spaces, a living area with a dining table, sofa, chairs and a bedroom. The bathroom was spacious, and the suite had a balcony with stunning views of the Metropolis Building and Gran Vía street. TPG's thoughts mimicked mine: He agreed the elevators were way too small but also loved the chic design and comfy king bed. Naturally, he was thrilled that the shower passed the TPG shower test. Check out a quick video tour of his suite below.

Based on seeing several rooms, I’d say that you can’t really go wrong with any room you book at The Principal — they were all gorgeous and modern and stuck to the same general aesthetic, with small variations between rooms. If you can guarantee that you’re booking a room with a view, though, you’ll be even happier.

As we had a jam-packed weekend full of nonstop wedding activities, I didn’t have many opportunities to try out the on-site dining options. I did manage to squeeze in a (delicious) club sandwich at La Pergola one day (after a long wait, of course), and enjoyed a cocktail or two on the roof.

Ático served breakfast daily with both à la carte and buffet options. I didn't try it, but it looked delightful.

The buffet spread was small but had everything necessary for a solid breakfast (Iberian ham for every meal of the day is a must in Spain). The fresh fruits and veggies looked especially delicious.

While the spread looked nice, at 28 euros per day for the buffet I preferred to get my carb-filled breakfast outside of the hotel for just a couple euros. It's worth noting that as the hotel was an SPG Design property, SPG elite perks were limited, meaning breakfast and upgrades were not included.

The hotel had a wellness suite with a small gym and a sauna as well as a treatment room used for massages and facials.

But the best amenity by far was the rooftop space, La Terraza.

It featured several distinct areas: a large space used for yoga classes and other events, a sunbathing area with large lounge chairs, and a bar area.

The bar had a menu with drinks and light bites — and long waits. Surprise!

This is where our group would meet up each day for a tinto de verano (a mixture of red wine and lemon soda), a must-have cocktail when in Spain. The only thing missing from this fantastic roof space was a pool.

If you're used to American speeds and service, this property (and maybe Spain as a whole) may not be for you. The slow (and punishingly small) elevators and relaxed pace of service may be a deal breaker for some. However, if you put yourself in the right frame of mind and remind yourself that the slowness is just how things are done in Spain, there's no reason you won't have a wonderful stay at The Principal. Admittedly, I didn't spend all that much time in the hotel, as the weekend was full of activities. But, when I was there, I thoroughly enjoyed it. I loved the juxtaposition of the historic building and the contemporary decor. And, best of all, I slept soundly all four nights while still being in the middle of what's arguably Madrid's trendiest (and loudest) barrio.