The Vanderbilts would be happy: A stay at Newport’s latest luxury property - Hammetts Hotel

Articles
Scott Mayerowitz is the executive editor of TPG and oversees all of TPG's editorial coverage. He previously was a reporter, then editor, at The Associated Press and reported for ABC News.
Follow
July 18, 2021
•
8 min read 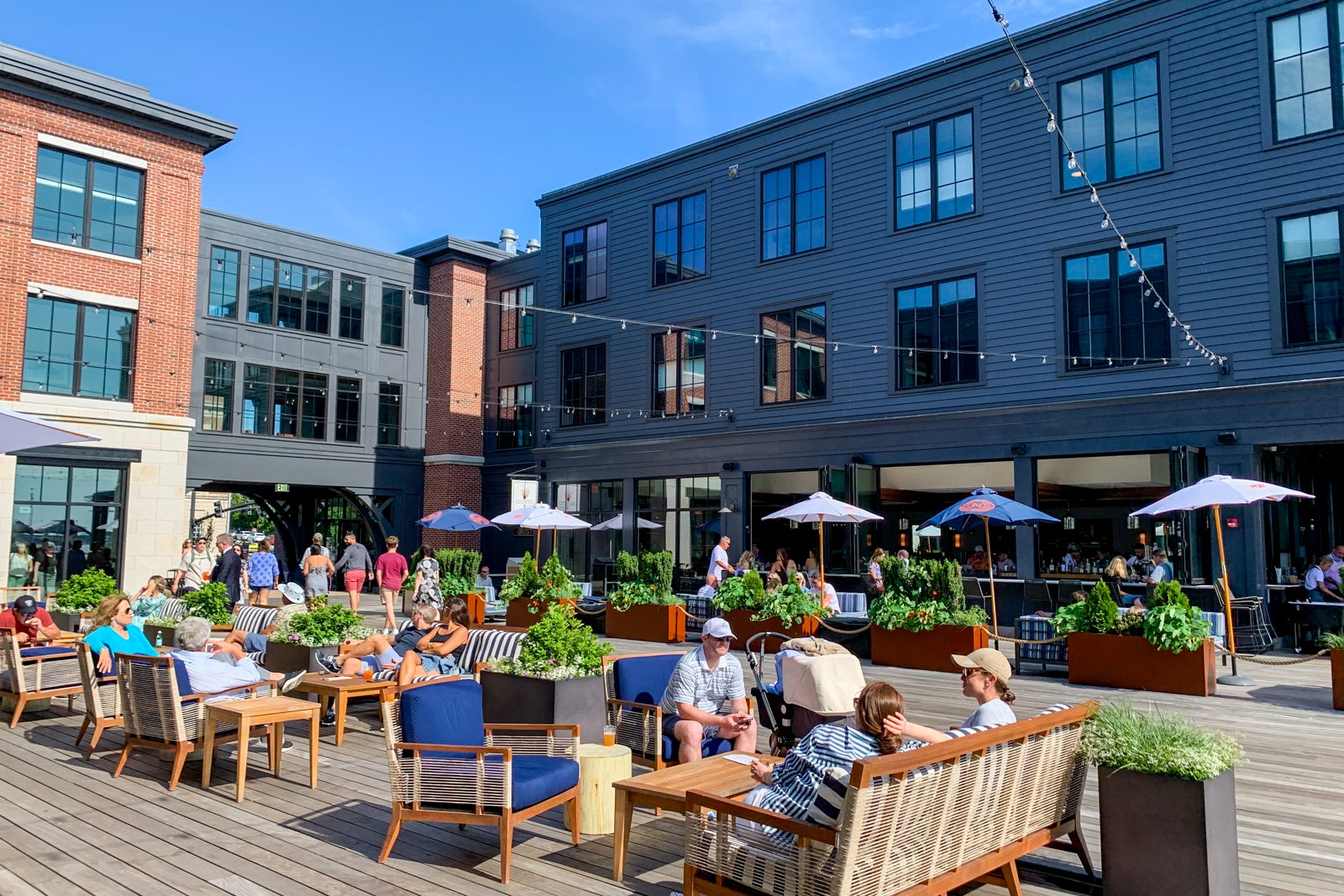 Editor’s note: The newly opened Hammetts Hotel provided a complimentary stay to TPG. The opinions expressed below are entirely from the author and weren’t subject to review by the hotel.

My first job after college was as a reporter for The Providence Journal. I’d often find myself assigned to the weekend shift, covering all the summer festivals and events in Newport, Rhode Island.

The city is famous for its Gilded Age mansions, world-class sailing and jazz and folk festivals. But there are also hundreds of smaller activities in the peak season.

And that’s where I found myself with my family 21 years later. Walking through downtown Newport we stumbled upon a strawberry festival -- a fundraiser for a local church. The highlight for my 6-year-old daughter was a giant carriage with a princess.

Turns out one of my former co-workers is good friends with the princess and her family (they recognized her in my Facebook post). And that’s all part of the charm of Newport and Rhode Island. It’s a small community. Later that afternoon, I bought a Del’s frozen lemonade — a popular treat statewide. The guy scooping it for me was none other than a former state representative I used to write about.

I had come back to Newport to check out one of the city’s newest and most luxurious hotels: Hammetts. But I also reconnected with a state and community that takes pride in its traditions and somehow balances that with the modern-day needs of tourists.

My journey started when TPG's editors sat down (virtually) to discuss the year's new and upcoming hotels, especially high-end ones that are easy drives from New York, Boston and other Northeast areas. Hammetts Hotel immediately caught my eye. It opened in June 2020, at the height of the pandemic, but is now really ready for prime time.

So, when the property invited us to spend two nights there, I packed my bags. (Note: This isn’t a formal review, since the hotel knew we were coming.)

Luxury in the center of town

The hotel is a much-welcome luxury addition, right in the heart of Newport. The design is spectacular and I could spend hours relaxing on the back deck. Even in winter, I could imagine cozying up in a giant chair next to a lobby fireplace.

That location and luxury don’t come cheap. Some winter midweek nights go for $200, summer weeknights for $450 and summer weekends start around $650. Some rooms can easily top $1,000 a night. For those who can afford it and want a quiet oasis in the center of all the action, Hammetts doesn’t disappoint.

Just note, this is an urban hotel. There’s no pool or spa here. No room service or breakfast options. It’s a place to unwind between your various local adventures.

We arrived from New York in our car and pulled into the valet entrance right under the hotel. (Nightly parking is $45. That might seem high but it's an outright bargain compared to the unprotected lot a block away charging $9 an hour.)

The hotel staff promptly welcomed us and led us and our bags to an elevator up to the lobby. Given the tight constraints of sitting on the edge of Newport Harbor, the architects did a phenomenal job of planning a seamless, all-season arrival experience.

One flight up was the spectacular nautical-themed lobby.

Don’t worry, it wasn’t filled with fake pirates, giant anchors or model ships. Instead, floor-to-ceiling windows flooded the space with natural light. A classy mix of wooden beams, a few nautical items and comfy furniture filled the space. Down the hallway is a series of three connected rooms that carried the theme but offered more intimate spots to unwind. The first-floor hallways were lined with unique and playful artwork.

Hammetts upgraded us to its largest room. Located on a corner on the third — and top — floor, the room clocks in at 560 square feet and was selling for close to $1,500 a night. Standard rooms were going for $670 during the mid-June weekend.

The hotel has 84 rooms split between the second and third floors. The first floor is filled with stores and the only on-site restaurant Giusto. (More on it later.) There is a total of four suites, one of which is accessible. There are four other accessible rooms.

Our suite had a living room with a pullout sofa bed, a daybed next to the oversized window and a master bedroom with the bathroom and shower. The suite could connect to both a king and queen room located on either side of the living room. Ten-foot-high ceilings made the room feel even larger.

The 7-foot-tall windows flooded the room with tons of light. More importantly, Hammetts had two layers of shades: a privacy shade and a blackout shade that fit into metal slots around the window frame. When it came time to sleep, our room was amazingly dark. There was no need for any of my normal tricks like propping pillows against the shade or holding curtains closed by leaning a chair against them.

Plus, there were rocking chairs — a favorite of my daughter.

For such a large room, the bathroom was underwhelming. There was a small area with a toilet and shower. Bulk dispensers had hair and body products from Lockwood. A sliding door separated this space from the rest of the room. Just outside the door was a small vanity, which could have used more counter space. Then there was a large open space that wasn't really part of the bathroom or part of the bedroom. The room also lacked a closet and dresser. There were just some hangers against a wall.

Wi-Fi was plentiful throughout the property. It wasn't lightning fast but strong enough and fast enough to stream videos.

Dining (and drinking) at Hammetts

The real star of the hotel is its back deck.

Besides the restaurant Giusto, there is a bar open to the public and a separate seating area just for hotel guests.

Sure, it isn't as grand as the mansions the Vanderbilts and their friends build. But it is one great spot to grab a drink or two.

The chairs are comfy, the breeze is strong and the cocktails are great. At night, strings of Edison light bulbs illuminate the deck.

For those looking to just stay hydrated, the hotel provides guests with a glass refillable bottle and a filling station on each floor.

This was something I recently had at a Canopy by Hilton in Washington, D.C., and is a great trend that I hope is adopted by more properties.

We had an amazing dinner at the hotel's restaurant Giusto. However, note that the eatery is operated by a third party, doesn't serve breakfast and there is no room service. (Stay tuned for my tip for a fabulous breakfast.)

Giusto takes up half of the deck and serves some great seafood and Italian dishes. The views and outdoor tables are great.

As for the food, I could write many superlatives to say how much we enjoyed the meal but really the photos below say it all.

Pro tip: Order the Scotch meatball. You won't be disappointed. Also, order the steamed littlenecks with the garlic doughboy. That won't disappoint either. And you should also order the ... you get the point.

After a big meal, there is a small but well-stocked gym for the next morning. Or just a comfy chair outside it, with a nice view while you rest and continue to digest.

The hotel does offer complimentary coffee and tea in the lobby. As for that breakfast, take a quick hike up the hill to the Franklin Spa.

No, this is not a spot to get a massage but rather a long-time local diner. A word of warning: It is cash-only, but worth it.

The spot is known for its eggs Benedict. I went with the classic but there was also a Maryland crabcake version the weekend we visited. My daughter got the Micky Mouse pancakes with chocolate chips and couldn't have been happier.

Hammetts offers a true luxury hotel in an unbeatable spot.

It is modern, sleek and comfortable. For the price it charges, I would like a few extras, such as in-room robes and slippers. But I guess given the location and how strong it compares to the competition, Hammetts doesn't need some of those extras that we usually see in high-end hotels.

The staff could not have been friendlier and everything looked perfectly maintained.

If you have the budget, there is no better spot in central Newport for your stay.

Featured image by (Photo by Scott Mayerowitz/The Points Guy)
Editorial disclaimer: Opinions expressed here are the author’s alone, not those of any bank, credit card issuer, airline or hotel chain, and have not been reviewed, approved or otherwise endorsed by any of these entities.