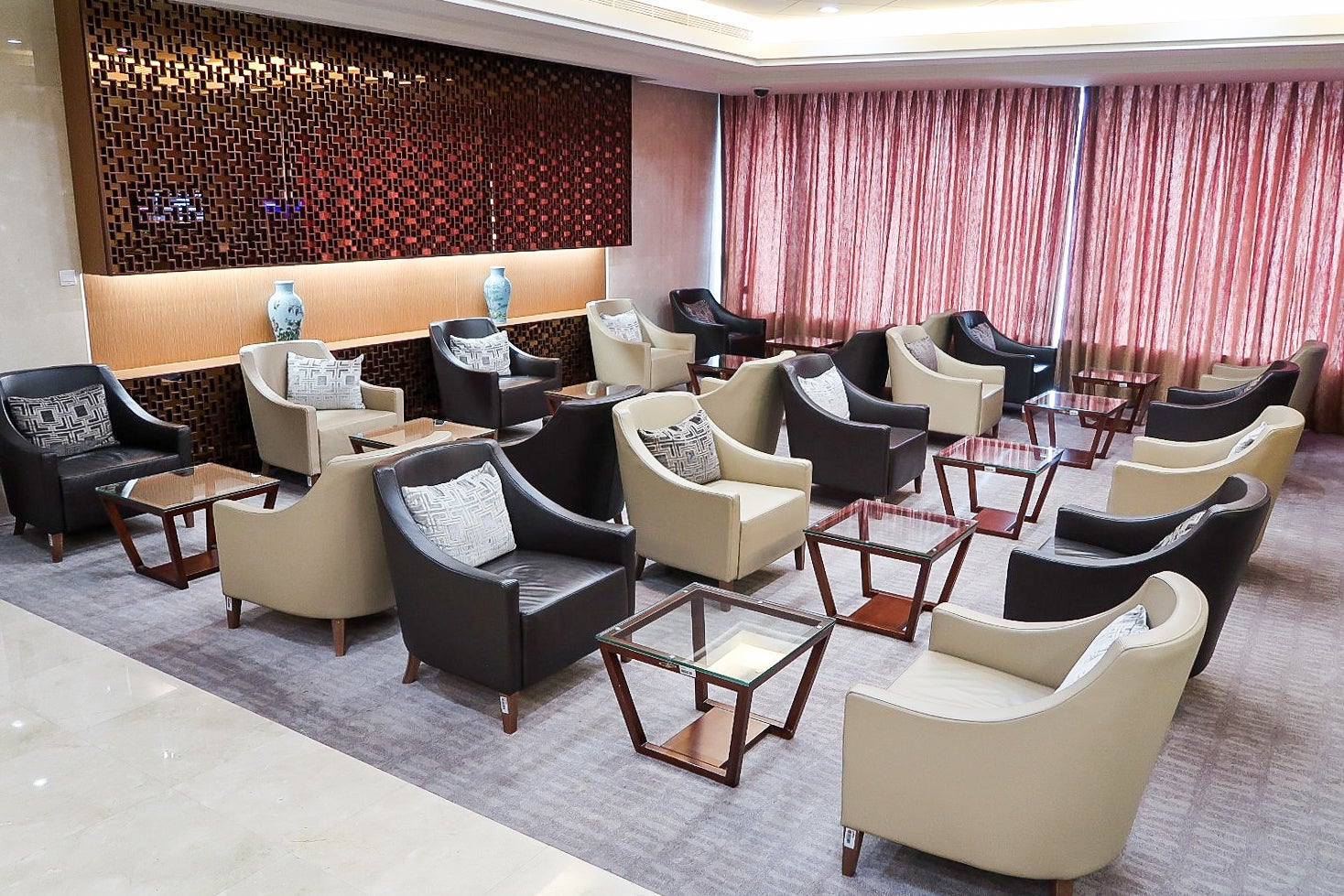 Priority Pass lounges provide lounge access regardless of elite status or cabin class — you just need to have a premium credit card that offers Priority Pass membership. There are more than 1,200 lounges worldwide in the network, including dozens of US airport restaurants and a few Minute Suites. While some lounges are little more than a room with snacks and a few chairs, many provide solid services and amenities.

A check-in counter separated the first-class and business-class lounges.

I entered the lounge into the dining room. Straight ahead was a buffet, including a window for ordering fresh noodles between 10am and 7pm.

There were tables for eating in this area. If I were looking for a table to work at, this would've been my best bet, but there weren't any power outlets near these tables.

To the left of the dining area was a hallway with two rooms with lounge chairs and a desk with a printer. The rooms with the lounge chairs had doors, so these rooms were good for phone calls or a quiet nap.

Continuing into the lounge was a nook with three massage chairs. Based on how sore I've been after using this type of massage chair in the past, I didn't partake.

The main section of the lounge had about 28 chairs, each with a large pillow. This area became somewhat crowded but completely cleared out once my AA flight started boarding.

On another table were snacks and a small freezer with ice cream.

Newspapers and magazines were available in the main sitting area of the lounge. Most were in Chinese, but some were in English.

There were in-floor power outlets available at many seats in the main section of the lounge. Each outlet had a Type A two-prong US-style socket as well as a Type I socket that accepted two flat pins in a V-shape as well as a grounding pin.

In the main sitting area of the lounge were a nursing station and shower room, but both were locked during my short stay. Presumably, both could be unlocked by speaking with the reception desk.

The restrooms were small but adequate considering the lounge's limited capacity. The women's restroom had two stalls, while the men's had two stalls and two urinals.

To access the Wi-Fi without a Chinese phone number, I needed to scan my passport at a machine by the lounge's reception desk. The scan was quick, and then I got a slip with a temporary username and password. Once connected to the Wi-Fi, I used ExpressVPN to get around China's Great Firewall and found the connection speed to be surprisingly good.

When I visited in the late afternoon, I found ample choices at the buffet in the dining room. There were five options in hot trays that opened and closed with the push of a button.

There were also three types of steamed buns as well as shrimp dumplings. The shrimp dumplings were the best food I tried at the buffet, followed by the vegetable steamed bun, but that's not saying much, as none of the food was particularly tasty.

A cold bar had salads and cold vegetable mixtures, including a cucumber salad that looked pretty good. There were desserts, sushi, sandwiches and yogurts available in a few refrigerators below the main buffet bar.

Sodas, juices, water, milk and coffee were available in the dining room from a refrigerator. There were more drinks available in the main lounge seating area, including a self-serve bar with red wine, white wine, liquors and mixers.

There was also a window where three fresh noodle dishes could be ordered: beef noodles, Peking noodles and tomato noodles.

I placed a noodle order at the window, but a lounge attendant waved me away and told me to wait. I wasn't sure if this meant I should wait to order or wait for my noodles to be ready. My question was answered when she delivered my Peking noodles about 10 minutes later. The noodles were large and filling but not particularly well flavored. The noodles reminded me of spaghetti, and the pork served on top was too fatty for my liking.

Having visited Air China's first-class lounge in PEK Terminal 3 multiple times on previous trips, I can confidently say Terminal 2's lounge isn't as nice or extensive. But there's not much point comparing the lounges, since which one you go to will depend on the terminal you're departing from — and the Air China lounge is the only Priority Pass lounge available in PEK Terminal 2. My take: I wouldn't arrive early just to visit this lounge, but it's a reasonable place to have some steamed buns or dumplings, grab a drink, take a nap or maybe enjoy a shower before boarding.