Why You Should Fly With Toilet Paper, According to the World's Most Traveled Man

Articles
Michael Y. Park is a senior contributing editor who’s written for The New York Times, Reuters, Bon Appetit and others. For TPG, he’s written about Air Force One, immigration and security, airline food and more.
Follow
May 26, 2019
•
8 min read 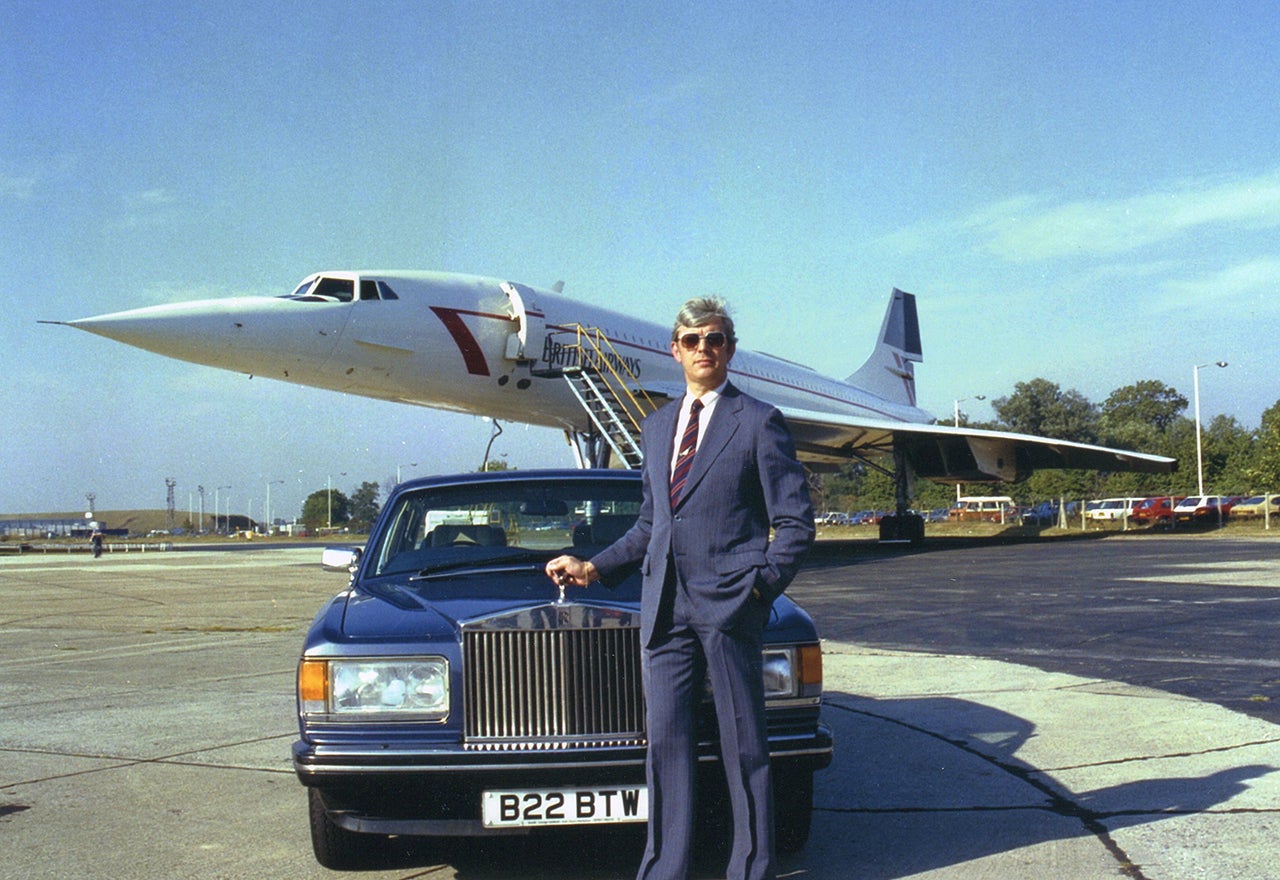 Why You Should Fly With Toilet Paper, According to the World's Most Traveled Man
This post contains references to products from one or more of our advertisers. We may receive compensation when you click on links to those products. Terms apply to the offers listed on this page. For an explanation of our Advertising Policy, visit this page.

Fred Finn is often called the most traveled man in the world, and he's got the miles to prove it: He's racked up 16 million miles, flew on the Concorde 718 times — he's the only person to have flown it three times in a single day— and visited 150 countries, along with surviving an attempted hijacking and a airplane bomb scare. He's also been certified by Guinness World Records, who tallied him at 714 Concorde flights just a few months before the aircraft was grounded for good, and was United's first million miler.

Now 77, the former technology licensor and native of Kent, England, has slowed down to earning a mere 450,000 to half-million miles a year, but has become a popular figure on the aviation speaking circuit. This year, he's celebrating the 60th anniversary of his first transatlantic crossing. He took a few minutes to talk about his life in the air from his home in London.

What do you think it is it about your life that keeps people wanting to hear more?

People are never tired about hearing about travel. It's a drug, and I love it. Once you've taken a trip as a traveler you become a storyteller, and I guess I've become a very good storyteller with the number of trips I've taken. This month is the 60th anniversary of my first crossing of the Atlantic Ocean. That took 19 hours on a DC-4 from London to Prestwick to Keflavik to Bangor, Maine, to Idlewild [now known as New York-JFK]. On the other side of that, crossing on the Concorde took two hours and 15 minutes.

You once spent Christmas Day with John Denver, right?

British Airways didn't fly on Christmas Day from London, and I wanted to be at home with my family [then in the US], so I went to Paris on Christmas Eve and took the Concorde from there. There were only three passengers, and one of them took out his guitar and played "Country Roads," and that man was John Denver. What an amazing song. We shared a limo.

Johnny Cash flew up and down with me several times to Nashville when I lived there. We used to go to dinner. I'd run into Bruce Springsteen a lot — he'd always ask the British Airways people who'd meet us how many miles I'd racked up that time. Paul McCartney, David Frost, Muhammad Ali, Floyd Patterson — you'd meet kings and princes of business.

But by this time you'd become something of a celebrity yourself.

I used to fly on the flight deck because they'd sell my seat. I'd sit in the jump seat behind the captain and put on the headset and talk to the pilots. If the cabin crew were busy, I'd go up to the galley and bring the food to them. They'd engage me to tell new passengers what the Concorde experience would be like.

One night, I'd flown into Kennedy and got the helicopter over to Newark when some guy came up to me and said, "Are you Fred Finn? Richard Branson would like to have lunch with you." So I got back on the subsonic, got into London around 7 or 8 in the morning, and they picked me up and I had lunch with Richard on his houseboat for three and a half hours. He asked me to work on his new airline, Virgin Atlantic. I suggested Upper Class, said they should get a limousine to put passengers on the plane and take them home and give them a first-class rail ticket. I told him to put a masseuse on board — that started very well, but people got a funny idea about that, so it came off.

You traveled 11 months out of the year. That must've taken a toll on your relationships.

A typical week would be New York down to Rio de Janeiro then to Buenos Aires, the Concorde across to Paris, back to Rio, from Rio to Lagos to Nairobi back up to London and then the next week starting all over again from London to Tehran. It wasn't particularly good for my married life. Not good at all. I had an American wife and then an Italian wife and now I've got my Ukrainian wife — I met them all traveling. My first two wives loved the first-class travel and the star treatment I got, but they didn't know what it was like to live with that all year.

From your perspective, what makes a airport excellent or subpar?

It all comes down to whether they move passengers in a quick, professional way. Munich is a brilliant airport, and Frankfurt, Singapore, Dubai and Hong Kong are good. Los Angeles is such a messy airport — it's crap, really — and Heathrow has become a shopping mall that aeroplanes drive up to. LaGuardia I don't particularly like — I'm always a bit worried whether I'm going to land in the river.

What's your favorite airline and aircraft, besides the Concorde?

The best in the world used to be Pan American. What a fabulous airline that was! I fly in Europe now with Lufthansa or Eurowings, which has a program called Bid for BEST. I get a seat with nobody sitting next to me, three extra inches of legroom, first-class check-in, the Lufthansa lounge before boarding and priority boarding — it's a nice little airline. Lufthansa's the best in the West, still a first-class service.

I believe the Dreamliner is the best airplane since the Concorde. It's a comfortable size to fly in. I think with these massive aeroplanes these days, it's like a bloody hotel flying. I'm not into that. I prefer the ones that look like proper planes. The Dreamliner's gorgeous. Before that, I liked the VC10 — not the [McDonnell Douglas] DC-10 — but the [Vickers] VC10, with the four engines on the back.

Why don't you believe jet lag is an actual thing?

The Concorde crossed in about three and a half hours. The subsonic would take seven to eight hours. If I was supposed to get jet lag going through those time zones on the subsonic, why didn't I ever get jet lag in the other? I figure it's really something to do with being stressed out in an aluminum tube. From packing to baggage claim, you're spending 20 hours that's quite stressful.

And you've been sitting in a baked atmosphere for hours — the air in the cabin comes through the engines and it's dry and dehydrates you. That's another reason I like the Dreamliner: The air doesn't come through the engines, so it's more humid. The VC10 used to have good humidity as well. [Editor's note: The cabin air on the 787 contains more moisture because of the composite materials used in the aircraft, not because of where the air is vented in from.]

I carry a little spray of fresh water to put on my bare skin, and I set my watch to the destination time as soon as they close the door, and live and eat and drink on that time. Then, if I'm in America, I stay up until it's time to sleep. If I ever have a thing such as "jet lag," it disappears in the middle of the night.

But decades of nearly constant travel have left you a believer in preparation, we take it?

I always check a bag. The polycarbonates today are a bit flexible, which works for me. The Samsonite case I have goes back 10 years, and weighs a kilo and a half. (Ed.: Three pounds.)

I always take with me a medical supply — paracetamol, antibiotics, Delhi-belly medicine — and a piece of string, because the handles on briefcases always break on the weekend, and with the string you can fix the handle through the weekend.

And when I speak to people, I always put a roll of toilet paper on the podium and let them wonder about it till the end of my lecture. I'm given maybe five to 10 bottles of wine when I travel, so how do you pack wine so it doesn't break? You put a toilet roll around the neck, because that's where the bottle is going to break. I've never had one break.

What essential travel advice do you have for fellow frequent flyers?

Keep calm, arrive early and stay hydrated, and you'll have a good time.

Our points-obsessed staff uses a plethora of credit cards on a daily basis. If anyone on our team wouldn’t recommend it to a friend or a family member, we wouldn’t recommend it on The Points Guy either. Our opinions are our own, and have not been reviewed, approved, or endorsed by our advertising partners.
See all best card offers
Related stories
Guide
3 ways a new credit card could increase your credit score
Reviews
Meet the Grayson Hotel, a new Hyatt sweet spot in New York City
News
1st look: Delta’s revamped JFK terminal with 11 new gates and 2 new Sky Clubs
Guide
When is the best time to book flights for the cheapest airfare in 2023?