Articles
Mike Arnot is the founder of Boarding Pass NYC, a New York-based travel brand and a marketing consultant to airlines. A private pilot, he can sometimes be found above the skies of New York City.
Follow
Aug. 27, 2019
•
7 min read 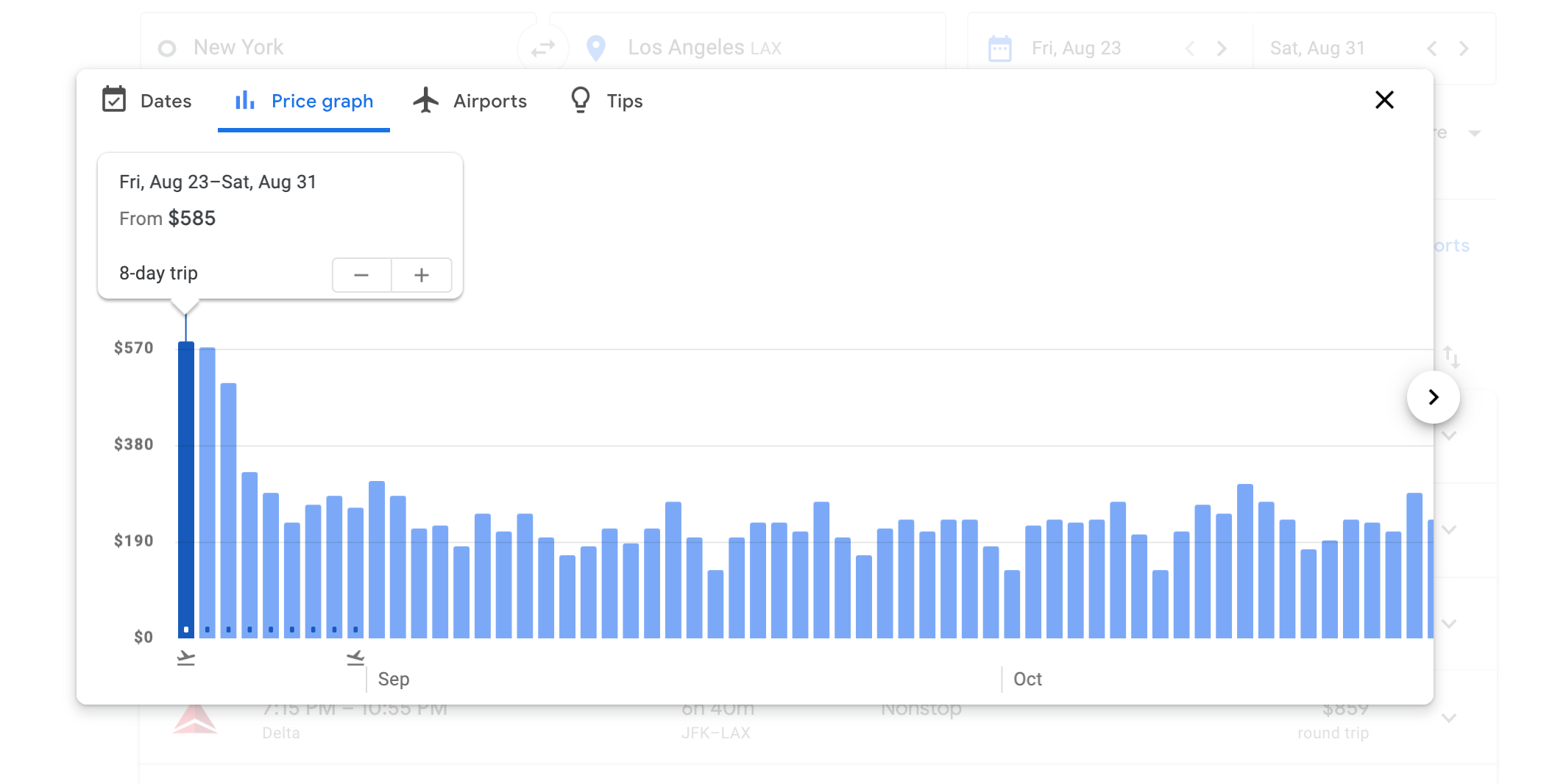 Finding a last-minute flight — one that departs today, tomorrow or even next week — can be an exercise in financial frustration. It will be likely more expensive than booking in advance, and you know that the fares aren't likely to drop. And, maddeningly, you know that there are probably going to be empty seats and possibly empty rows. It's true that with airlines far stricter than ever about managing their capacity, a lot of flights are full — but that's not always the case.Why don't the airlines lower their fares on those last remaining seats to fill up the plane?

Above is a Google Flights search for flights between New York and LAX departing the next day. The fares are very similar — identical, in the case of Alaska and United out of Newark — and high for a domestic flight. (Note that American Airlines' flight is about $75 cheaper for its last flight of the day.) I tracked the fares right up to the departure time on Google and the various airline websites. They didn't budge. Other times they have moved up or down slightly, but never into the realm of "affordable."Why?

The Type of Flyer

“It's a combination of things. Most airlines bet last-minute business travelers will pay more and are willing to risk missing out on a handful of low-yield customers," said Al Lenza, an airline industry veteran and consultant.

Low-yield customers include leisure travelers, who tend to book long in advance, said Scott Keyes, of Scott's Cheap Flights, often because they have specific vacation days or times of the year they can vacation. In contrast, Keyes said, "Because it's their companies footing the bill, business travelers don't care what the fare is."

In addition, the airlines aren't in a rush to fill planes.

On average, the airlines are selling 80% of their domestic fares. For example, last year American Airlines reported load factors (the percentage of revenue seats sold on a flight) of 82.7% for its mainline operations. Load factors have continuously increased over the last decade. However, based on that percentage of seats sold, on a flight with 100 seats, some 18 seats will go unpaid, if not necessarily empty (non-revenue crew or airline staff, for example, could end up in them). This is called spoilage in airline parlance.No matter. For the airlines it's not about maximizing passengers, but maximizing revenue.

Butts In Seats Is Not the Answer

"If the airline has only a few seats remaining close to departure, it must determine whether it will maximize revenue by selling the seats now at a discounted price or wait to potentially sell the seats even closer to departure at a higher price, presumably to a passenger traveling for business, at a higher business-level fare," said Dr. Gerald Cook, adjunct professor at Embry-Riddle Aeronautical University.

The risk of seats going empty can be calculated, and nowadays it can be calculated with some precision. Airline revenue-management teams use highly sophisticated software and have historical sales data on which to base decisions. At the heart of the calculation is the statistical concept of probability. The demand for airline travel, like the demand for most products, fits a bell curve. Without getting too far into the weeds, this means that the airlines can estimate the probability of a particular fare selling on a particular date close to travel and the best revenue they can squeeze out of a seat.

It's called "expected marginal seat revenue." The revenue teams know that a $200 fare will sell near 100% of the time and an $800 fare will sell, say, 50% of the time. That means that while the $800 fare might only sell half the time, the airline can accept spoilage because, on average, it'll earn at least $400, more than if it sold the seat for $200 to avoid flying an empty seat. "If the probability of sale times the higher price is greater than the certain sale now at a lower price, (an airline) should hold the seats for late sale," Cook explained. That means the airlines will hold the line — and all of them will hold that line in roughly the same way — as the flight approaches.

"This method of deciding whether to discount seats for late sale or hold the seats for a last-minute sale at a higher price would maximize revenue over the many flights (an airline) operates," Cook explained.

"For business class, discounting close to departure is dangerous if people begin to wait out last-minute inventory, given the large price gap in business versus economy prices," Lenza said. Cook agreed: "With the expectation that fares will increase as the departure approaches, passengers will purchase as far in advance of the flight as their plans allow. This purchasing pattern is much easier for the airline to manage."Nevertheless, in the example above, American Airlines' flight departing at 9:45pm is nearly $100 lower than its competitors. Chances are, that plane has a few too many unsold fares. The airline undercuts its competition in order to maximize the total revenue of the flight. Indeed, if it had grossly overestimated demand, you might see that flight with $200 seats. It's the job of the revenue management team not to let that happen, and it doesn't happen very frequently.

Revenue management is part art and part science and the subject of much academic research. It all started with the British Overseas Airways Corporation or BOAC (now British Airways) and Kenneth Littlewood, an employee of the airline. In 1972, he wrote this paper on the concept of maximizing the revenue on a particular flight, rather than maximizing the number of passengers carried. While it seems obvious today, Littlewood's paper applied a mathematical approach to solving the problem of how many seats to offer at what fares.

This began the development of probability models that ensure you won't get a last-minute deal on your flight from JFK to LAX.

Mike Arnot is the founder of Boarding Pass, a New York based travel brand, and a marketing consultant to airlines, none of which appear in this article.