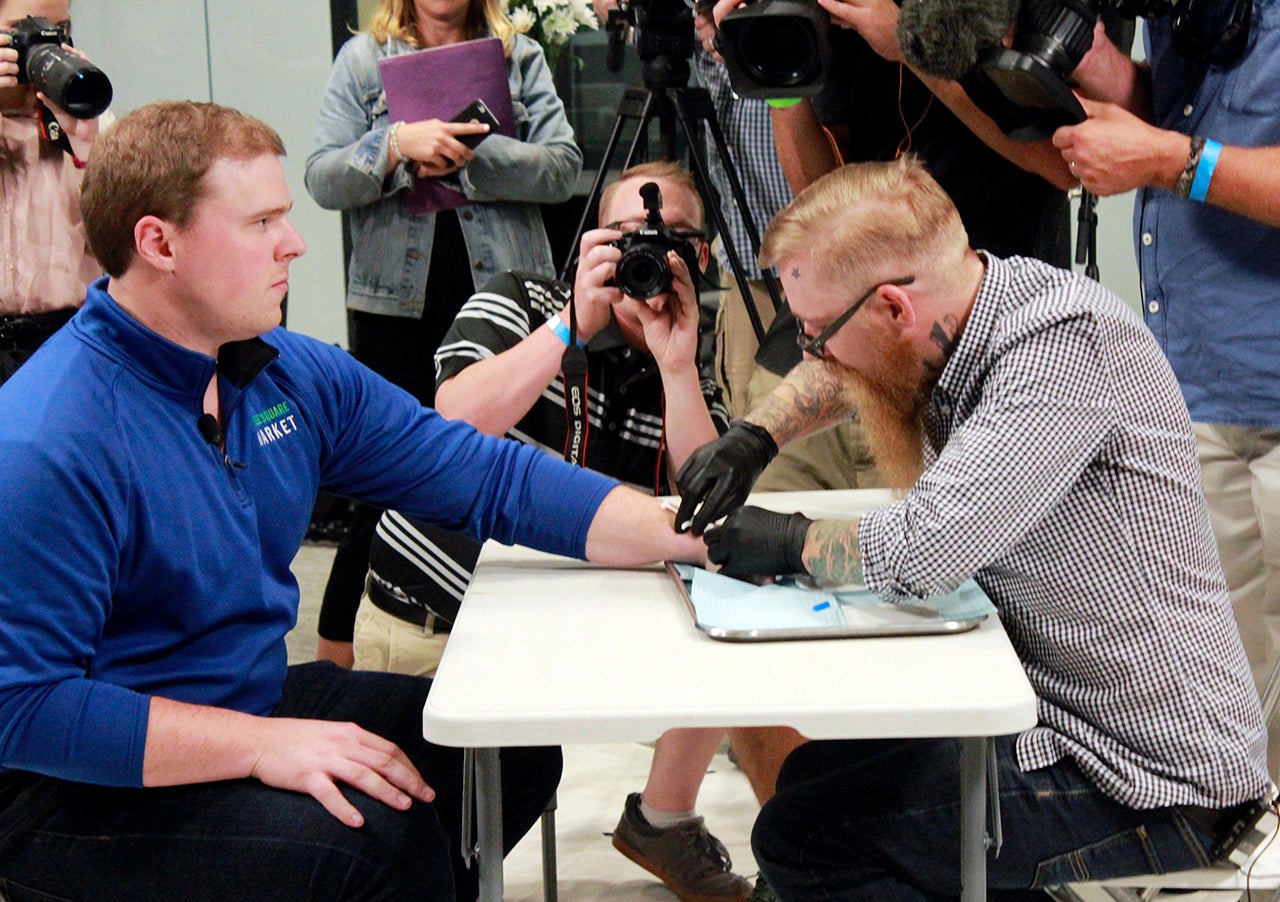 We'll Be Paying With Body-Implanted Credit Cards in 2 Years, Author Says
This post contains references to products from one or more of our advertisers. We may receive compensation when you click on links to those products. Terms apply to the offers listed on this page. For an explanation of our Advertising Policy, visit this page.

The future of credit cards won't just be entirely cardless — it will involve microchips implanted in our bodies, according to a tech journalist and self-described futurist.

"How many times have you had your credit card or a keycard on you in the last seven days? Probably a dozen times a day, I have to use Bluetooth to open my house door, a keyless entry to open my door," Andy Walker, co-author of "Super You: How Technology is Revolutionizing What It Means to Be Human," said in a phone interview. "Why wouldn't I want to be able to wave my hand at my barista to pay for my Starbucks? I can't lose [the chip], and it makes sense. I would say we'll see body-chipped credit cards in North America in the next two or three years, mass adoption worldwide in five to seven years and then ubiquity within 10."

Microchips embedded under the skin have already taken off in Sweden, where around 3,500 people have had reportedly them inserted in their hands over the last three years so that they can do everything from opening locked doors at work to paying for train fare on the state railways. In Wisconsin last year, 50 of the 80 employees at Three Square Market, a vending-machine company, volunteered to have chips implanted that allow them to open the front doors to the building, pay for food and log on to their work computers. In both cases, the chips were the sizes of grains of rice and implanted in the users' hands in a procedure described as about as painful as a mild pinch.

"My keys, my wallet, my memberships, my airline passes — all these things I've got to keep track of — can be assigned to this one thing with the ability to be all those things," Walker said. "Once upon a time, we had a wristwatch, mobile phones in our car and scanners in our office, and now they're all on one phone. The body chip will be a digital Swiss Army knife, and we can't lose it and we won't damage it by putting it through the wash."

Not so fast, one tech-security expert said. Just because we can do something doesn't mean we will.

"Can we do it? Yeah, and closer to five years from now than 10," Aviram Jenik, CEO of Beyond Security, said. "But I don't think it's going to happen. It's so horrible from so many directions."

Aside from the natural human revulsion to having something inserted in one's body, Jenik said there's a twofold problem with the concept of body-implanted credit chips.

"From a security perspective, to say a security system is unbreakable goes against 50,000 years of human history," he said. "The first generation will get hacked for sure — it's guaranteed. There's money behind [credit-card chips], which means someone will want to steal it. And those people who are hacked aren't going to go back in for a second try."

And then there's the issue of obsolescence: You'll need to get a new chip at some point, and you can't just reach into your wallet and toss the old one out.

"Imagine you've got the first iPod, which I don't think anyone would think is even functional at this point," Jenik said. "You're carrying an old iPod in your body and you can't upgrade it unless you go to a surgeon and have them take it out and put in the new one. Can you imagine going to Verizon and getting surgery instead of just picking out a new iPhone?"

But Walker remained optimistic about a body-chipped future for credit cards.

"In the '80s, the great fear was ATMs and letting machines count our money," he said. "'What if it rips me off?' Now 99% of us don't think twice about using a machine to handle our money. With this, the learning curve will be exactly the same. We adapt as human beings, the naysayers scream, and then we see the utility of it."

Even the seemingly deeply ingrained human fear of objects in our body? That too will pass, he said.

"People have artificial hips put in every day, bariatric bands, laser eye surgery, medical interventions and cosmetic surgery," he said. "It's going to be commonplace. What's new always sounds weird, but once people see it as relatively painless, they will begin adopting it."

And financial institutions have an incentive to switch over to body chips, too, he said, saving money on a single RFID chip instead of having to send out replacement cards every couple years or every time a customer loses one.

"The financial industry is very, very cautious, but once one of the more progressive guys sees the level of customer service it allows for, you'll see the other financial institutions jump onto it as well — you saw the same cautiousness with mobile banking at first."

None of the major credit-card companies commented when contacted for this story.

But even Walker said that body-implanted microchips won't prove to be the final answer when it comes to convenient payment methods. In other words, don't expect them stick around for a lifetime once they finally take off.

"They're an interim technology and may only be popular for 10 years," he said. "The signs point to the massive research going into neural interfaces."