Updates on Traveling to the Big Island During Kilauea Eruptions

Articles
Summer Hull , aka Mommy Points, ran the Mommy Points site for families who want to travel more for less using miles and points for seven years. She now heads up a variety of special projects at TPG when she isn't exploring the world with her own two girls.
Follow
May 07, 2018
•
7 min read 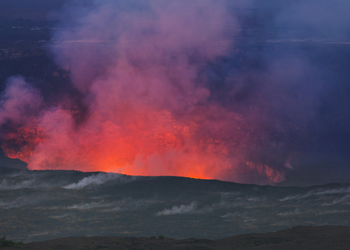 Updates on Traveling to the Big Island During Kilauea Eruptions
This post contains references to products from one or more of our advertisers. We may receive compensation when you click on links to those products. Terms apply to the offers listed on this page. For an explanation of our Advertising Policy, visit this page.

The Hawaiian Islands, as you likely know, are volcanic islands. On the Big Island, there are actually five major volcanoes and the famed Volcanoes National Park that is over 500 square miles in size. One of these five major volcanoes on the Big Island is Kilauea, and it is one of the world's most active volcanoes, with largely continuous eruptions since 1983. All that said, it shouldn't be a shock that Kilauea is erupting as we speak on the Big Island. However, the manner and location of the eruptions are different than normal, and the lava flow is consuming roads, power lines, and unfortunately thus far at least dozens of homes on an eastern part of the island.

From thousands of miles away on the mainland, it is hard to know just how serious this is, or whether Big Island travel plans should be altered because of the eruptions. In case you are worried about some upcoming Hawaiian travel plans, I've done a little digging to see how the Kilauea eruptions are impacting travel.

Only a handful of airlines operate flights into Hilo, the airport closest to the current lava flow from Kilauea including Hawaiian and United, both of whom have travel waivers in effect. Hawaiian has expanded their waiver through May 20, 2018, at this point. Head to your airline's website to see exactly what the waiver will cover, but at a minimum, it should cover change fees. Not all airlines that operate into Kona have current waivers in effect according to their websites, but that is likely because Kona is on the other side of the island. You can always contact your air carrier directly if these eruptions are impacting your desire or ability to travel to the Big Island at this time.

The Hilo Airport was closed briefly on May 4, 2018, after the 6.9 earthquake hit while they inspected for damage, but it has since reopened and right now operations seem to be largely normal.

Due to the ongoing seismic activity and the anticipated explosions caused by large rock falls, the interaction of groundwater and lava, and the possibility of an ensuing ash fall event, the Kīlauea portion of the park will be closed beginning Friday, May 11, 20I8 and will continue until further notice.

Closure Area: All areas of Hawai' i Volcanoes National Park are closed, with the exception of the portion of Highway 11 that runs through the park and the Kahuku Unit.

The USGS has reported over 500 earthquakes in and around the Kilauea Volcano since Friday afternoon, after the large 6.9 quake that was felt around the area. Following that earthquake, for the safety of staff and visitors, the Hawai'i Volcanoes National Park closed over the weekend until 3PM on Sunday when portions of the park reopened. Some rock slides related to the earthquakes have been identified and the only portions of the park currently open are:

I tried calling a couple of hotels in the Hilo area today and was unsuccessful in getting through, but I did see some volcano-related updates on the Facebook page of the Hilton Grand Naniloa Hotel in Hilo. The hotel is open and operational, but their updates indicate that some of their staff members have had to evacuate from their homes and that the earth keeps 'quaking and shaking'.

, because of a risk of a steam and ash event. They will reopen when it is safe to do so.

Where to get up to date Big Island Volcano information

This is obviously a situation that is changing rapidly, so anything I write today may be out of date tomorrow. If you want to learn more about the lava flow and associated air quality related issues, I would head here to the USGS Volcanoes page. The Volcanoes National Park website is also a good source of information as it relates to the park and related closures. The recording daily briefings can be found here, and are very informative with up to date information. You can also check with the Hawaii Department of Transporation on Twitter as they have been sharing updates about road and airport closures related to Kilauea. This Hawaii forum on Trip Advisor also has some practical discussions about upcoming trips to the Big Island.

If you are interested in some on-the-ground information and videos, the team at WXChasing has had some amazing footage and updates. While everyone in Hawaii knows there is an active volcano, just like everyone here knows we live near the coast, it is still heartbreaking for residents of the impacted neighborhoods of Leilani Estates and Lanipuna Gardens who are losing everything they have to an unstoppable stream of lava.

May 12th Update: I would be less inclined to go to the area as of today, May 12, 2018, than when this post was originally written almost a week ago because of the worsening vog and risk of an explosive steam induced explosion. If you do plan to go, perhaps consider bringing your own mask as they are reported to be scarce on the island. You can look at some of the vog related conditions and forecasts here.

Because of the location and type of eruption, as of right now, if I personally had a trip planned to the Big Island in the near term, I would probably still go. This is especially true for things scheduled on the Kona side of the island. However, as you start getting closer to the volcano, and especially for activities related to Volcanoes National Park, you will need to stay up to date on changing conditions. If anyone in your family is especially sensitive to respiratory issues or would be greatly impacted by any power outages or road closures, that may need to play into your decision making, too. Remember, this isn't all about lava, but also potential additional earthquakes.