Articles
Kaeli Conforti is a digital nomad and has been backpacking solo around Southeast Asia, Australia and New Zealand since January 2018. She loves inspiring others to travel the world and create their own adventures.
Follow
May 20, 2018
•
10 min read 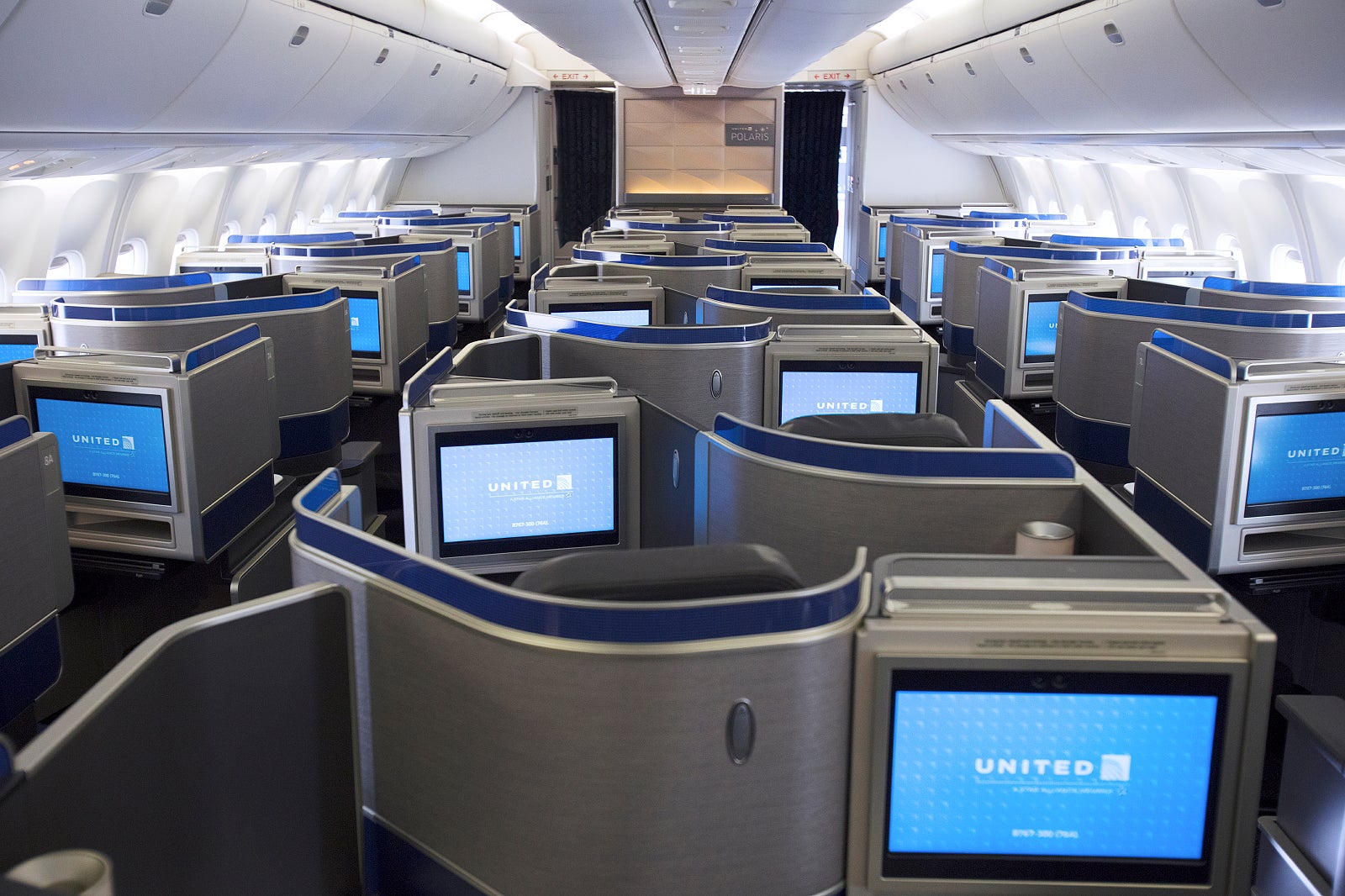 Sometimes the last thing you want to do, whether you're on your way to a new favorite vacation spot or flying halfway around the world for an important business meeting, is spend the next few hours of your life trying to find comfort in a coach seat. Turning right is tough, especially when airlines keep cramming more and more seats into those already jam-packed economy rows. There's got to be a better way, right?

We recently asked our TPG Lounge readers which Economy Plus/Premium Economy, Business or First products might have been worth splurging on the upgrade after booking a lower class of service — and what it was that convinced them to take the plunge and pay or use points to score the upgrade. Here's what they had to say. (Some responses have been lightly edited for style and clarity).

When It’s Totally Worth the Splurge

Go big or go home, as they say. These readers sure did when it came to paying for upgrades with cash, points, or a combination of the two — and for good reasons.

"I paid about $850 to upgrade to Delta One from LAX to JFK. It was a late flight and I had just broken up with my fiancé so I wanted comfort and unlimited Champagne!" — Melissa D.

"I used to fly from London (LHR) to (ORD) regularly to see family. At that time, United used to do day-of upgrades to J [business class] for $800 each way so pretty much every time, I'd upgrade the return leg so I could get a night's sleep, go straight to work and bill an extra day. A great deal!" — Stev H.

"I've submitted an upgrade request (points + pay) for a flight from New York to New Zealand. It's roughly 20 hours in the air and the SFO [San Francisco] to AKL [Auckland] portion would be in 773 Polaris!" — Barney B.

"Swiss sells very affordable upgrades from any economy fare (even one without luggage) for intra-European flights. Some are as cheap as $50. The upgrade lets you earn business-class miles and comes with perks like lounge access and fast-track security. It’s worth every penny." — Leszek B.

"I paid cash at check-in to upgrade to a PEK-ORD [Beijing-Chicago] flight in AA business class. It was worth every penny after a hellish two-week business trip that involved being stuck in Jilin as well as other frustrations, so when the screen popped up asking if I wanted to pay I couldn't enter my credit card number fast enough. It was the best 14 hours of any trip." — Anna H.

"I had been sick with a cold the whole week but had to fly RDU-LHR [Raleigh-Durham-London Heathrow] for work and took AA’s $500 offer to upgrade to business. It was worth it so I could actually get some sleep and start to feel better." — Mary Q.

"I find Econ+ on United worth paying for, though to be fair, I was able to try it for free first. On the way to our first trip to Hawaii, my wife and I connected at LAX. Knowing it would be the longest segment of a long day of travel, I decided to ask at a United customer service desk within the terminal if we could change to some open Econ+ seats and the agent did it for free. I've also purchased it in a bundle with a free checked bag before I was a United MileagePlus Explorer Card holder. The extra 3-4 inches makes a difference!" — Eric R.

"I had an economy to business upgrade email sent to me for a flight on United from Chicago to Orlando for $86. I'm not sure how they came up with that rate but I snatched it up! It was after a long leg of HKG [Hong Kong] to ORD in economy so I was ready to stretch out a bit." — Paul H.

"I recently upgraded from economy to business on AA from JFK to LHR after receiving the email an hour after checking in. $400 for a night's sleep in a bed was worth every penny. I got to put in a full day's work in London and go to sleep at a normal time. It was the second time I have had this offer which, sadly, will be gone once premium economy is added to this route." — Stephen S.

"My favorite upgrade “splurge” was simply SFO-ORD. I purchased economy tickets for my husband, mother and myself, then upgraded to business class using miles + money just to be able to experience the upper deck of the 747! None of us had any status and I figured it was our one and only chance to try it. The best part was seeing my mother in awe." — Julie L.

"MIA to DOH [Miami to Doha], $850 to upgrade from economy to business after I asked at check-in. Worth. Every. Penny. I arrived in Thailand ready for the day despite an eight-hour flight in coach after the ultra-long-haul in business." — Rikhil Q.

"ANA has a good premium economy offering. We received the option to bid for an upgrade from economy and got it for a great price. The flights were round-trip from JFK to NRT [Tokyo], the food and service were great and the leg room and recline were comfortable. I had just flown United First from Philadelphia to Las Vegas and ANA’s premium economy all around has domestic first (on AA and UA) beat by a long shot, unless of course you are flying their premium transcon routes." — Adam J.

"I had an economy ticket booked from LAX-EWR [Newark] on United and was offered an upgrade to business after I checked in for a little over $100 per ticket. Best money I spent ever. I had a lie-flat seat on a red-eye going home so I was able to get some shut-eye." — Sammy S.

"15 years ago, I paid $300 a ticket to upgrade from coach to first from Boston to Paris on Delta/AF. Best money I ever spent to arrive rested for a long weekend anniversary trip." — Lisa M.

"I got an offer once to upgrade to United business with lie-flat seats from Newark (EWR) to Los Angeles (LAX) for $200 and did it in a heartbeat. That flight ended up delayed on the tarmac for 1.5 hours, and we de-planed and re-boarded, so in total I spent about nine hours on that plane. In coach, it would’ve been terrible so this was the silver lining to that day." — Mike C.

When It's Better to Stick to a Strategy

Several readers chimed in with a method to their madness, sharing specific instances when they'll consider splurging for upgrades.

"Do the red-eye for sleeping. It's sometimes cheaper than a hotel." — John T.

"Anytime I’m in economy flying back on Swiss or Austrian, it's always worth it to pay the $700 or so to upgrade since business class is exponentially better than economy, especially since I won’t get free upgrades to Economy Plus like I would get with United." — Lara S.

"For five to seven-hour nonstop flights at night (according to my body clock), with a lie-flat and direct aisle access, I'll do the reasonable thing and pay a reasonable amount, use SWU [Systemwide Upgrades] or use points to upgrade. Anything over seven hours, I'm booking with miles in business or above. I can't afford to buy long-haul international business and don't want to risk buying a coach seat if I might not manage an upgrade." — Hillary T.

"I am United Silver and although I can upgrade same-day to Economy Plus, it's not always available and most of my flights are more than four hours. For the last couple of years, I've purchased the Economy Plus Upgrade (domestic) subscription for $499, which allows upgrades at booking and I love it. In a month, it pays for itself in what I would have spent if I'd done one-off upgrades." — Liz Z.

"When I have to book economy on a 12+ hour flight because someone else is paying or reimbursing me, it's worth every point and dollar to upgrade to business and a lie-flat seat." — Amy G.

"It’s a tiny upgrade, but Air France allows you to pay 70 euros to move your economy seat to the upstairs part of the A380. We were also able to get the 2-4-2 format. It's small but made a comfortable 11-hour trip from LAX to CDG [Paris]." — Randall W.

"I pay more for extra legroom seats every chance I get. The best one was for $100 on Lufthansa from MCO-FRA [Orlando-Frankfurt], with legroom for days! Heck, last week we paid to get 1-16 boarding positions on Southwest in hopes of getting the exit row. We did!" — Angie S.

"I almost always pay more for extra legroom seats on domestic flights. For anything over six hours internationally, I'm looking for a cash upgrade to business or a mileage upgrade. Gotta love the points game. It has really made traveling a better experience!" — Pam I.

When It's Better to Hang Onto Your Points

Others would rather be more conservative when it comes to paying for upgrades, either saving them for certain products or just refusing to do it at all.

"It's usually not worth it. Just buy straight up with points, unless you have upgrades from AA Executive Platinum or United 1K." — Moti L.

"I'm in Delta First right now and paid using Amex points with 50% for my preferred airline. The difference between this and JetBlue Even More Space seats is an inch horizontally, a drink and a salad. I'd save my points next time if I didn't have them to burn." — Jeff Z.

"[When flying] overnight to Europe from the West Coast, I've used a points/miles combo. It's worth it going over, [since I'm] so well rested at arrival, but not coming home when you need to stay awake to adjust to the time change." — Cheri P.

Our points-obsessed staff uses a plethora of credit cards on a daily basis. If anyone on our team wouldn’t recommend it to a friend or a family member, we wouldn’t recommend it on The Points Guy either. Our opinions are our own, and have not been reviewed, approved, or endorsed by our advertising partners.
See all best card offers
Related stories
Guide
Why it pays to upgrade your cruise ship cabin
Guide
3 ways a new credit card could increase your credit score
Reviews
Meet the Grayson Hotel, a new Hyatt sweet spot in New York City
News
1st look: Delta’s revamped JFK terminal with 11 new gates and 2 new Sky Clubs