Articles
Kaeli Conforti is a digital nomad and has been backpacking solo around Southeast Asia, Australia and New Zealand since January 2018. She loves inspiring others to travel the world and create their own adventures.
Follow
Sept. 30, 2018
•
7 min read 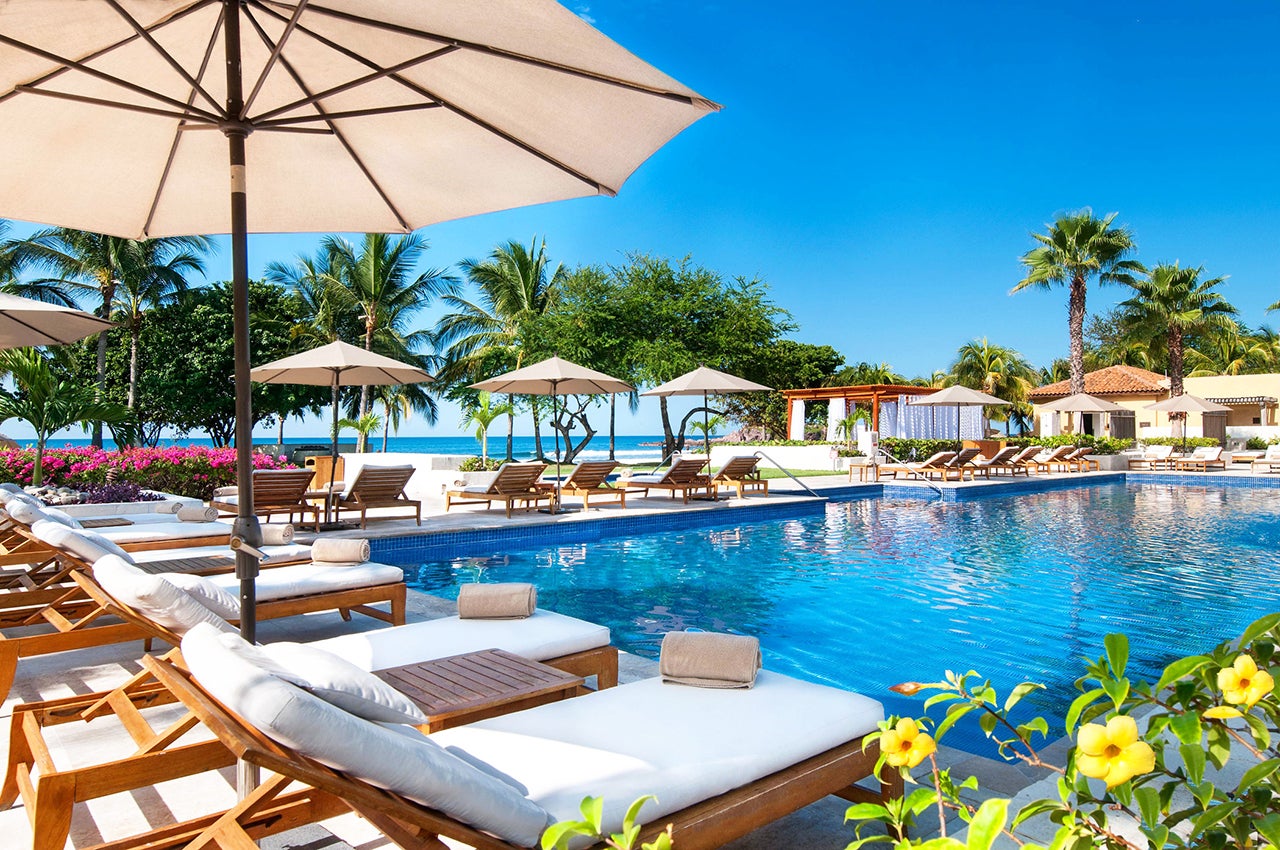 Last week, after sharing our TPG Lounge readers' most impressive award flight redemptions of the summer, we couldn't help but wonder what they'd been able to do in terms of hotel redemptions. Unsurprisingly, there were quite a few head-turning awards. Here’s a look at some of our favorite responses. (Some responses have been lightly edited for style and clarity).

It was nice to see the big SPG-Marriott merger didn't get in the way of anyone's summer vacation — in fact, it might have actually helped some TPG readers have an even better trip.

"A five-night award redemption to the St Regis Punta Mita Resort with an upgrade to an ocean view suite! We just completed this as our first anniversary trip. It was a straight up SPG redemption, nothing fancy, although I did do the 4+1 offer." — Jennifer G.

"Two round-trip first-class tickets on Delta to Grand Cayman for 50,000 miles and five nights at the Grand Cayman Marriott Beach Resort for 125,000 points, with taxes and resort fees totaling $450. Not too bad." — Joe V.

"Two nights at the Four Points by Sheraton Eastham Cape Cod for 20,000 Starpoints total. We had renovated rooms and got [a value of] 4.3 cents per point." — Douglas A.

"A long weekend at the Sheraton Grand Hotel & Spa, Edinburgh. We spent hours in that rooftop hydrotherapy pool and had a great crowd of Royal Wedding watchers in the lounge." — Stephen B.

"10 days of hotels (mostly suites) in Eastern Europe. This was before everything got way more expensive with SPG!" — Holly S.

"A night at the newly renovated Marriott in Baton Rouge, Louisiana. My wife and I took our kids there for a weekend trip to a water park. The kids loved the lounge, too, which was on a top floor. I had just gotten my Gold membership (now Platinum)." — Brian B.

"Five nights at The London EDITION after a two-week trip to South Africa. After spending so much time on buses and in guesthouses, getting pampered by amazing guest services was spectacular. Plus, getting the 5th night free by using Marriott Rewards points wasn't half bad." — Jonathan S.

"127,000 Marriott Rewards points for two nights at the The Cosmopolitan of Las Vegas in a balcony suite with fountain views, plus a $100 food and beverage credit, a $400 dinner at Rose. Rabbit. Lie., a meet and greet and a personal dessert-making class with the chef." — Dave S.

High Times at the Hyatt

TPG Lounge members often got creative with their points and miles, using them toward impressive flight-and-hotel redemptions or super-long stays at epic hotels.

"250,000 Hyatt points + 170,000 Chase Ultimate Rewards points to United for my husband and I to enjoy 10 nights at The Park Hyatt Maldives Hadahaa with business-class flights to and from." — Zack L.

"190,000 miles for Singapore Airlines' first class for two from Los Angeles to Seoul, 60,000 Hyatt points for the Grand Hyatt Seoul, 140,000 Alaska Miles for first class on JAL from Seoul to Tokyo with a three-night stopover, then flights to Los Angeles for two and 75,000 Hyatt points for the Grand Hyatt Tokyo, Roppongi. Plus, we got to use two club upgrades at both hotels by matching Mlife Gold to Hyatt Explorist. Short, but it was a great trip! Got the 140,000 Alaska Miles by doing a last-minute Marriott Air and Hotel travel package. Now I just have to figure out where to stay seven more nights with that!" — Mike L.

Hilton, IHG and Other Hotel Brands

Several TPG Lounge members cashed in their precious points for redemptions at Hilton and IHG hotels at home and abroad, or strategically used the Citi Prestige to add a 4th night free to cash hotel stays.

"Not the cheapest redemption but it was so worth it: 95,000 Hilton Honors points per night for the Waldorf Astoria Beverly Hills. That hotel and its service are nothing but amazing. At that time, a one-night stay would have been around $950 so the value per Hilton Honors point was actually one of the best you could get." — Dav I.D.

"Unfortunately, this was cancelled due to Hurricane Lane but we got a full refund. Would have been first class from Newark (EWR) to Honolulu (HNL), HNL to Maui (OGG), then OGG-EWR in coach for 500,000 United miles for the four of us. Used my Citi Prestige to get the 4th night free at Disney's Aulani and the 4th night free at the Fairmont Kea Lani in Maui. Total cash value was about $9,000." — Peter J.

"I used my Hilton Honors Aspire Card from American Express for two nights at the Waldorf Astoria Park City and a $250 credit at the spa. They upgraded us to a junior suite, too. It was a nice way to spend Labor Day weekend with my hubby!" — Mary S.

"The Intercontinental London Park Lane for seven nights. It was incredible and I loved every second of it. The staff was awesome and the neighborhood can't be beat (right out of the Marble Arch station). We did all the sights and went to Wimbledon. Given that it was peak season, I got upgraded to a superior room with my IHG platinum status, but no suite. Still, it was awesome." — Michael A.

Did We Say Hotel Points?

And finally, perhaps TPG reader Matt S. is the real winner in all of this:

"Meeting a really lovely lady who will be my future wife only a few months after a bad breakup. Oh, you said AWARD redemption? Psh, I’m hoarding those things for the honeymoon!" — Matt S.