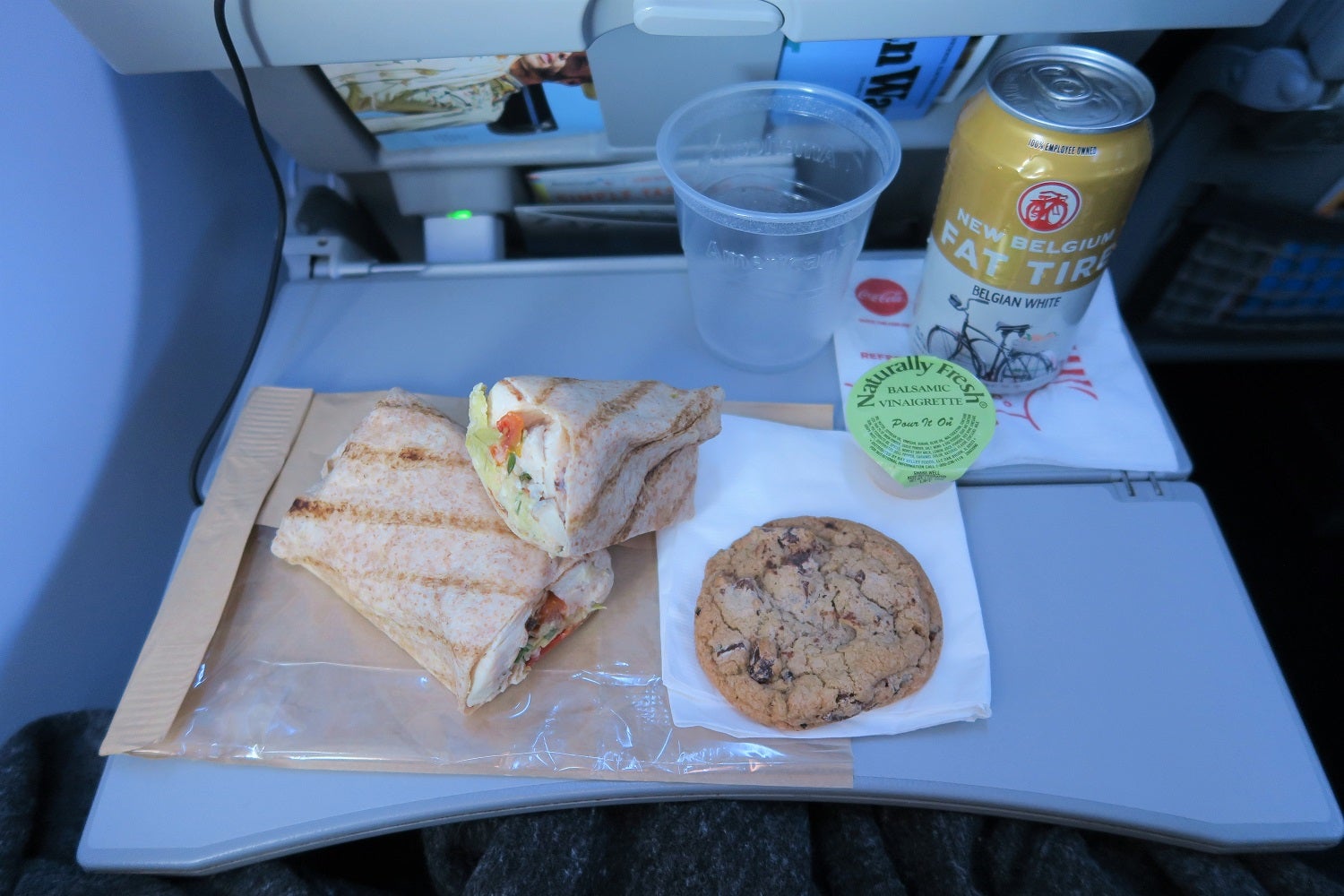 Economy Food You Actually Want to Eat: A Taste Test of AA's New Partnership With Zoe's Kitchen
This post contains references to products from one or more of our advertisers. We may receive compensation when you click on links to those products. Terms apply to the offers listed on this page. For an explanation of our Advertising Policy, visit this page.

On Dec. 1, American Airlines launched new Zoës Kitchen buy-on-board economy food on domestic flights longer than 1,100 miles. Breakfast options include a Breakfast Sandwich and a Continental Breakfast Box while lunch/dinner options include the Grüben, a Chicken Wrap and the Hummus Duo.

And the photos of the new meals look great:

But of course those photos were staged:

So, we wanted to check out the new food for ourselves to see if it's worth the price -- and the calories. Thankfully Katie and I had two qualifying flights across the country this past week, which allowed us to taste test the options. Here's what we found:

I almost missed out on my chance to try this out. After accepting a $600 bump to take a flight one and a half hours later from Charlotte to Los Angeles, my upgrade cleared on the new flight. Tough turn of luck, I know. Thankfully, I was able to convince the flight attendants to get me a sandwich from economy after service was complete and there were leftovers.

I found the marble sandwich bread to be a bit soggy, but not bad considering the feta spread in the sandwich. It was clear that the sandwich had to have been made that day. The wheat bread made the sandwich feel somewhat healthy, but I knew better from the cheese slice and feta spread -- which both upped the taste experience... and the calories. The sandwich featured a pile of fresh-tasting deli turkey with the twist of a nice crunch provided by the slaw.

The sandwich is served with a cookie, which I found to be a little tough and chewy, but not overly sweet or doughy. Between the large sandwich and the cookie, the $11 purchase was certainly enough to serve as a meal.

Katie tested the wrap option on both of her qualifying flights across the country. She found the wrap to be served cool -- as expected -- with parts of wheat tortilla wrap slightly soggy from the ingredients. Saying she'd order it again, she especially enjoyed the chicken and cheese, but found the roasted tomatoes and arugula fell out while eating.

Overall, it was a decent sized meal but could be filled in by adding a bag of chips. But it was certainly enough to satisfy hunger on the long transcontinental flight.

Sure enough, this isn't the hummus box of the past -- and at $10, it should be larger. While the box wasn't light on hummus, it could have benefited from more veggies and/or bread, as the hummus easily outlasted the dipping food. Comparing notes, Debra (the Platinum elite) noted that she used her pretzels as additional dipping material -- but still had more hummus leftover.

The pita rounds didn't taste especially fresh, but I assume that the hummus boxes are designed to have a longer self life than the sandwiches. Of the three meal options, I'd personally order the wrap or sandwich next time.

Which Card to Use

As of May 2018, all American Airlines flights are 100% cashless — even on regional jets. And since you’re going to need a credit card for the purchase anyway, you might as well use one that gives you 25% off in-flight American Airlines purchases. These cards include the:

If you want to ensure that AA stocks a Zoës Kitchen meal for you, you can pre-order a meal between 30 days and 24 hours before your flight. Just go into your trips on the AA website, select a reservation with a qualifying flight and scroll down to “reserve a meal.”

Overall, it's great to have "real" food on board, even if you have to pay for it. For the amount of food included, it seems worth the $10-11 price point. And passengers with tight connections will surely appreciate having the option to get an actually-good bite to eat on board.