Articles
Katherine Fan is a former senior travel features reporter at The Points Guy who covered everything from personal finance to travel and aviation.
Jan. 14, 2019
•
3 min read 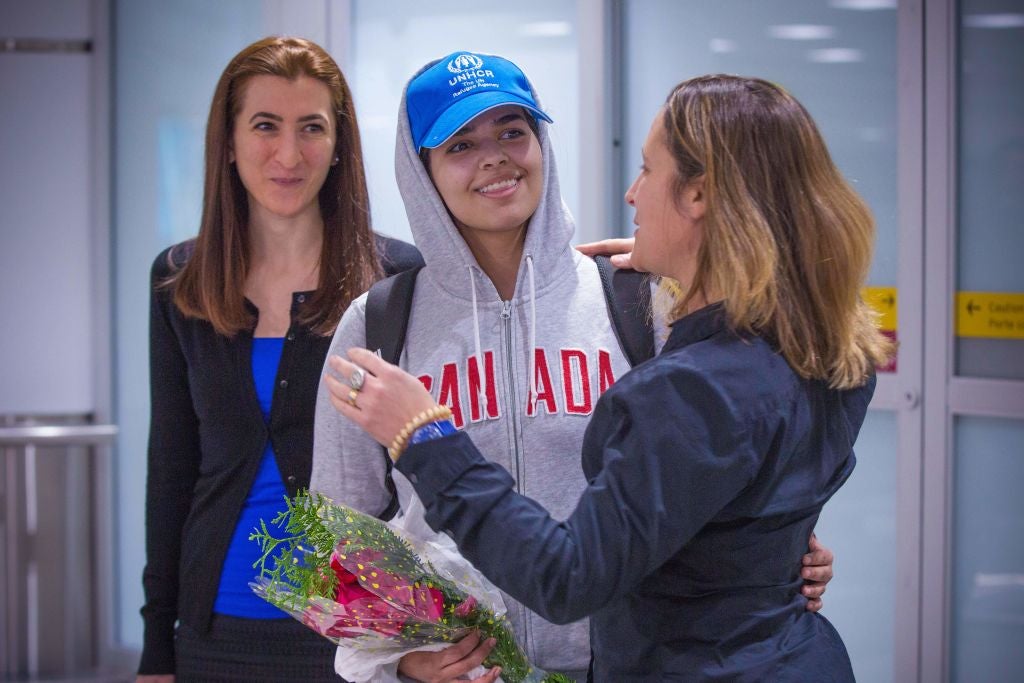 Saudi Teenager Seeking Asylum Finds New Home in Canada
This post contains references to products from one or more of our advertisers. We may receive compensation when you click on links to those products. Terms apply to the offers listed on this page. For an explanation of our Advertising Policy, visit this page.

A Saudi teenager who sought asylum in Bangkok has found a new home in Canada.

Rahaf Mohammed Mutlaq al-Qunun, 18, walked through the arrivals gate at Toronto International Airport (YYZ) Saturday with Canadian Foreign Ministier Chrystia Freeland by her side. The teenager wore a gray sweatshirt with "Canada" emblazoned in red letters, and smiled at the cameras pointed her way.

In a brief statement, Freeland called Mohammed al-Qunun a “very brave new Canadian,” before reminding reporters that the teen was very tired and ready to “go to her new home.”

Mohammed al-Qunin made international headlines in early January when she barricaded herself in a Bangkok hotel room, saying she feared for her life if she returned to her native Saudi Arabia after renouncing Islam. “My life is in danger,” she told Reuters. “My family threatens to kill me for the most trivial things.”

Mohammed al-Qunun escaped during a family trip to Thailand, attempting to make her way to Australia from Bangkok’s Suvarnabhumi Airport (BKK) in order to seek asylum as a refugee. However, officials from the Saudi embassy met her at the visa counter in Bangkok and confiscated her passport, which led Thai officials to threaten to deport her back to her home country. Furthermore, her brother and father arrived in Bangkok to demand she return home with them.

So Mohammed al-Qunun retreated to a hotel room within the Bangkok airport, opened a Twitter account and launched a social media campaign for her freedom. The international attention led Thai officials to relent, and the United Nations to declare her a refugee, after which the Canadian government agreed to grant her asylum Friday. Mohammed al-Qunun boarded a Korean Air flight in business class from Bangkok to Seoul, connecting from there to Toronto. She posted two photos to Twitter from one of the planes, with a brief message comprised of hashtags and emojis: "#I_did_it"

Canadian Prime Minister Justin Trudeau said Friday that the nation was “pleased” to provide safe haven for Mohammed al-Qunun “because Canada is a country that understands how important it is to stand up for human rights, to stand up for women’s rights around the world.”

In an interview with The New York Times, Mohammed al-Qunun described an upbringing of "unrelenting abuse at the hands of her family" in northern Saudi Arabia, including numerous beatings from various family members. She said she began planning her escape two years ago, after an unsuccessful suicide attempt.