Articles
Summer Hull , aka Mommy Points, ran the Mommy Points site for families who want to travel more for less using miles and points for seven years. She now heads up a variety of special projects at TPG when she isn't exploring the world with her own two girls.
Follow
May 29, 2021
•
7 min read 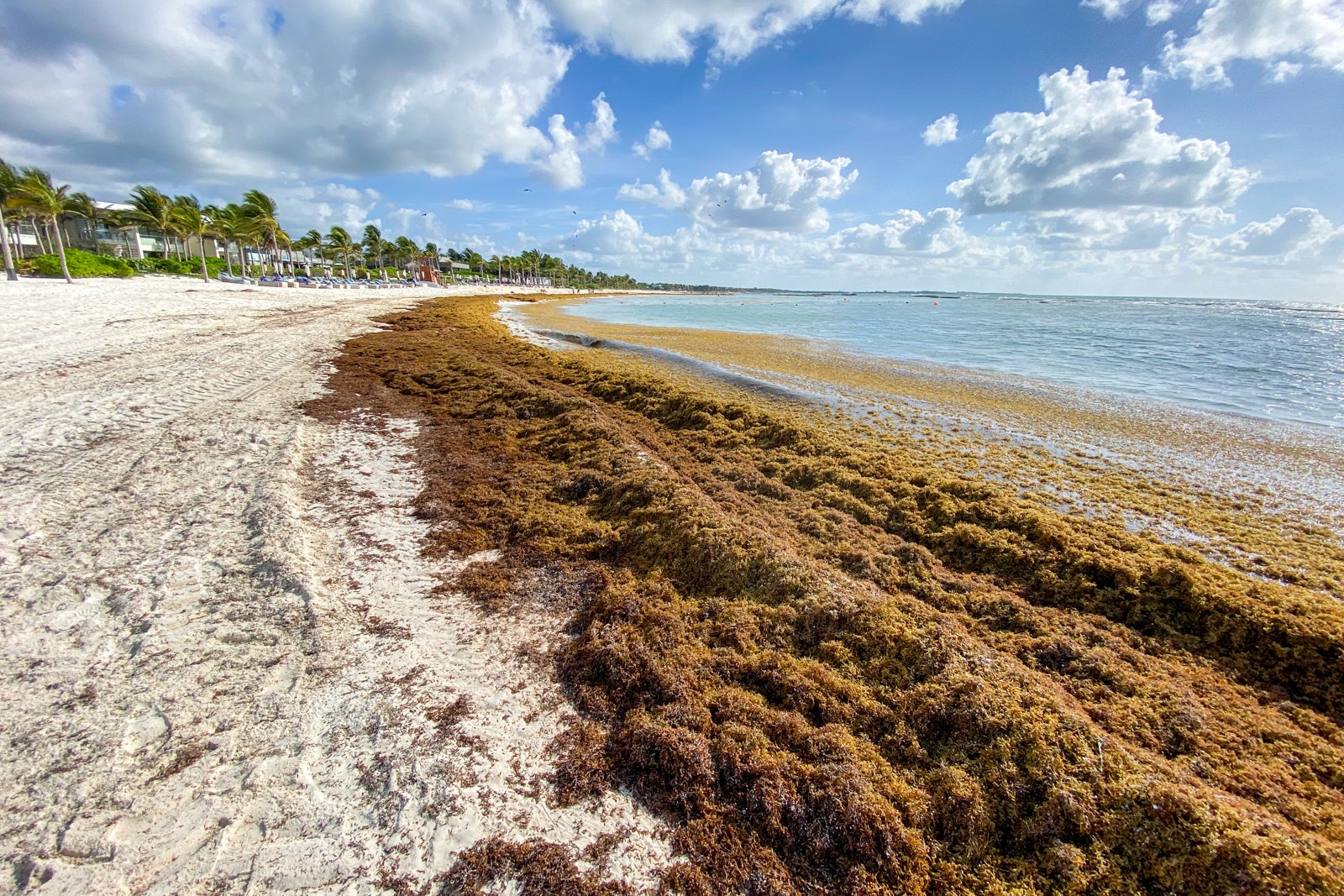 There's a biological problem once again plaguing the Mexican Caribbean coast -- and it could potentially ruin your summer beach vacation. And this time, we're not talking about COVID-19 (though that's also a very real concern).

Right now, thousands and thousands of pounds of thick, stinky, seaweed are again washing ashore on some of Mexico's best beaches each and every day -- and unfortunately, it's not expected to improve in the near term. In fact, according to research done by the University of South Florida, the problem may be more intense than it was in 2019, a year that was regarded as one of the worst for this phenomenon.

This reddish-brown, thick seaweed, known as sargassum, isn't a problem at lower levels but has steadily become a very real problem in the last decade. As annual blooms are becoming more prolific year after year, potentially aggravated by deforestation, river runoffs, the presence of fertilizer and a mix of other issues environmental issues. But regardless of the precise cause, this issue has hit especially problematic levels in the last five to six years.

During a recent late-May visit to Mexico's Riviera Maya, near Cancun, I encountered vast quantities of sargassum. But while sargassum is particularly troublesome along Mexico's Caribbean coast in places like Cancun, Tulum and Playa del Carmen, this is by no means an issue isolated just to Mexico.

If you are planning a beach-centric trip to Mexico's Quintana Roo area, or another potentially impacted area, it is essential you factor this prevalent seaweed into your plans ... or you may risk an unpleasant surprise awaiting you on the shore.

Where is sargassum found?

Sargassum seems starts its journey off the coast of places such as western Africa and Brazil, and according to the National Oceanic and Atmospheric Administration (NOAA) is currently impacting the Gulf of Mexico, Central America, the Greater Antilles, the Lesser Antilles, and South America.

The most impacted areas are often the Atlantic-facing shores across those areas, though due to winds and currents, sometimes other shores in the area can end up with piles of this seaweed that releases pungent hydrogen sulfide as it decomposes.

If you are ready to research whether a particular destination is likely to be impacted, NOAA uses satellites to show where it can be found.

There are also more localized tracking systems available, such as this one along the Caribbean coast of Mexico's Yucatan peninsula. While these broader tracking systems are very helpful, sometimes the very best resource is to look at a live beach cam in the area you are interested in. The best way to find live streams from the area you want to visit is likely a Google search, but here are some in the Riviera Maya area.

Looking more locally along the coasts of Cancun, Playa, Tulum, Cozumel and Isla Mujeres paints an interesting picture. For example, the windward side of Cozumel, along with the windward coast of the Yucatan are currently battling a very real seaweed issue, while the leeward side of Cozumel, along with Isla Mujeres to the north are currently fairing much better.

While things could change, this means that it is currently possible to have a beach vacation in that area without dealing with the sargassum, but may have to be very strategic with your precise location and what side of the island you are on can make a huge difference.

Related: How to plan a great trip to Cancun

Is there a sargassum season?

Reports indicate that there are times of the year where you are more likely to encounter sargassum in large quantities than others. Specifically, most reports come from February to October, with the highest concentrations often coming from April to August, though this depends on weather, currents and other factors.

For example, in 2020 (when many people weren't traveling to these beach destinations), sargassum levels were actually quite low compared to previous years. However, 2018, 2019 and now 2021 are shaping up to be pretty bad when it comes to the prevalence of this noxious seaweed.

What's being done to fight this seaweed?

The resort we were at in Mexico's Riviera Maya quite literally fought the seaweed from dawn to dusk. There was a crew of around a dozen men racking up the sargassum along the resort's relatively small stretch of beach at any given time during the day.

In addition, every few minutes, a specially equipped tractor would make the rounds up and down the beach collecting the seaweed. If you have a beach-facing room, you can hear the tractor begin its rounds just as soon as the sun comes up.

While it was an almost Sisyphean task to try and get ahead of the relentless algae, at times, the resort just about kept pace with it. It was never totally gone, but there were times when it wasn't a huge nuisance or barrier to beach entry.

But this battle is not just happening on land -- Mexico's Navy is collecting the seaweed by ship. There are also manual barriers erected by some resorts in the area to catch as much sargassum as possible before it reaches the shore.

When the seaweed is not collected and taken away promptly, such as at areas located outside the resorts (as shown below in an unoccupied part of the coast near Playa del Carmen), it can decay and create a very thick, brown layer of water all around the shoreline.

My trip to Mexico's Riviera Maya coast was still great, despite this unwelcome beach occupant.

The resort we were at did an admirable job battling the sargassum to the point that as long as you weren't bothered by regular tractor trips up and down the shore, you could sit by the beach and relax without smelling the seaweed. You could even get in the water, as long as a little seaweed here and there didn't bother you.

However, if you were at a resort that isn't as diligent, or if the constant work happening on the beach is a deal-breaker for your relaxation, then this sargassum season could be a trip ruiner for you in places like the beaches near Cancun and beyond.

Related stories
When does airline elite status expire?
Act fast: Get a $15 Lyft credit with your Walmart+ subscription
Increased offers available on Barclays cobranded business cards
This top cruise line is now throwing in free tours worth thousands of dollars if you book
Featured image by (Photo by Summer Hull/The Points Guy)
Editorial disclaimer: Opinions expressed here are the author’s alone, not those of any bank, credit card issuer, airline or hotel chain, and have not been reviewed, approved or otherwise endorsed by any of these entities.