Articles
Katherine Fan is a former senior travel features reporter at The Points Guy who covered everything from personal finance to travel and aviation.
Aug. 14, 2018
•
9 min read 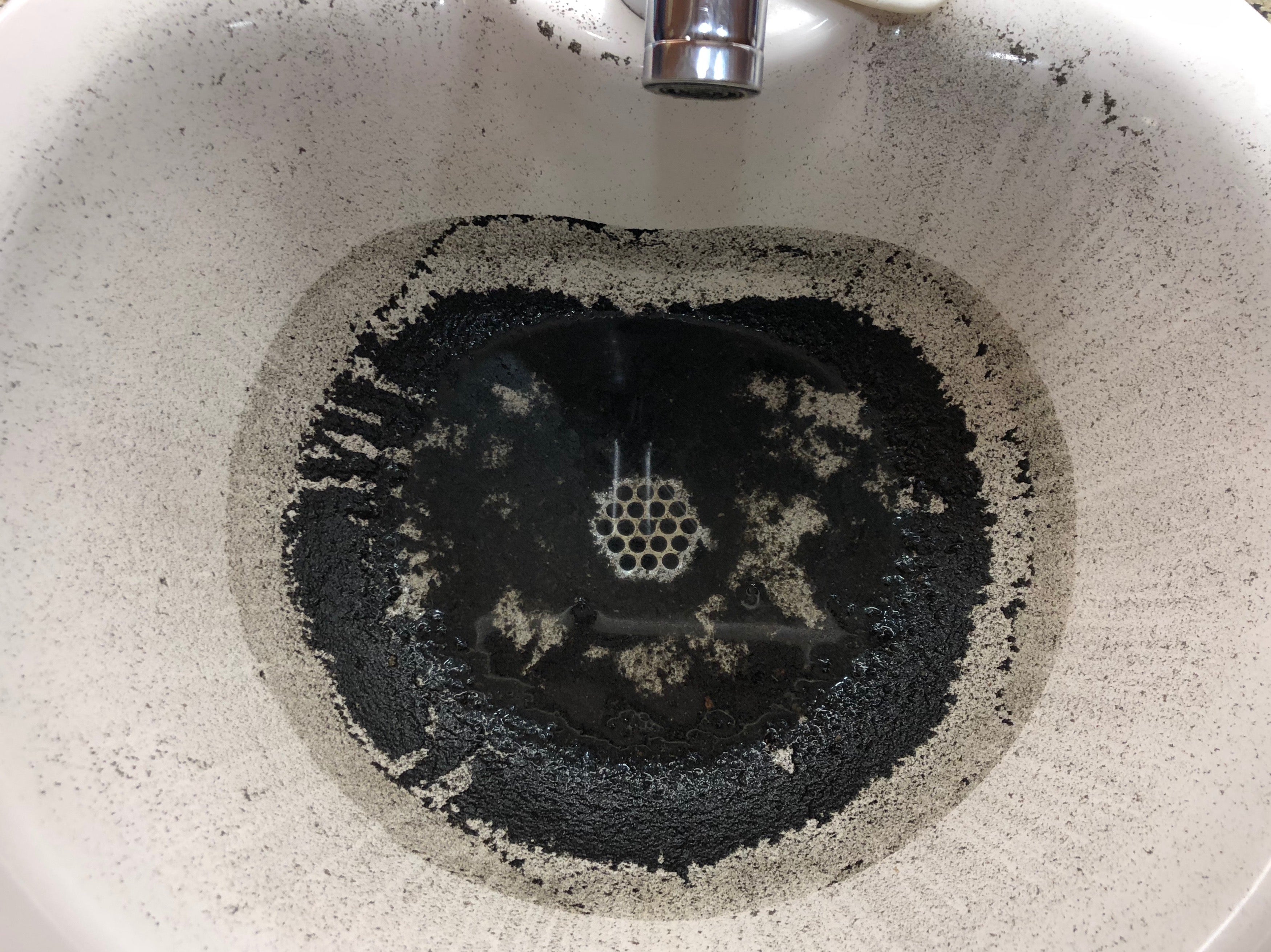 'Raw Sewage Overflowed Into Our Family's Hotel Room': TPG Reader Nightmare Experience
This post contains references to products from one or more of our advertisers. We may receive compensation when you click on links to those products. Terms apply to the offers listed on this page. For an explanation of our Advertising Policy, visit this page.

TPG reader and business road warrior George Cacilhas planned a three-day getaway to spend some time with his family last week, hoping to take advantage of the final days of summer before his children went back to school, and before Cacilhas left on a two-week business trip overseas.

Cacilhas and his wife hoped to spend some time relaxing on the Santa Cruz boardwalk with their two sons and baby daughter. Unfortunately, their restful plans went down the drain after the family of five checked in to the Holiday Inn Express & Suites on Ocean Street in Santa Cruz which Cacilhas, an IHG Spire member, chose for its proximity to the boardwalk.

"I noticed a little bit of black residue inside the bathroom sink as soon as we checked in around 4:00 or 5:00pm on Thursday night, August 9," along with the distinctive odor of raw sewage, said Cacilhas, who had worked in the plumbing industry at an earlier point in his career. "So I notified the front desk about the issue on our way out, letting them know that they most likely had a stoppage in their main line" — an issue that occurs when the main drainage line between a building and the street becomes too clogged with debris to allow clear passage of sewage. The front desk staff said that nobody was on duty at the time, but let him know that maintenance would take a look at the problem in the morning.

But when the family returned to their hotel room around 9:30pm Thursday night, the situation in the bathroom was even more dire. This time, Cacilhas found that the entire room stank, and the sink had completely overflowed with raw sewage in their absence. This time, Cacilhas asked the front desk to call the off-duty manager, who claimed that the hotel was all sold out for the night.

Cacilhas was headed back to the room to figure out how to make do for the night, when he met his wife leaving the room. "She came out to say it was a lot worse than just the sink," Cacilhas told TPG. "The whole floor was wet, our toiletries were contaminated, and maintenance came from home to take a look at the problem." Cacilhas said that the maintenance person was "great," and simply said "Ugh..." when he saw the water all over the floor. The family had to work to keep the curious 14-month-old from crawling into the sewage water, and Cacilhas notified the manager that the family would not spend the night in that room.

"At that point, the manager magically found us another room for the night," and Cacilhas and his wife made do for the children with the toiletries they had left, with a promise from the front desk that they would be able to speak to a manager the next day.

That night, Cacilhas turned to the TPG Lounge for support and guidance on what to do next, asking, "What is the best way to handle this?"

The following morning around 9:30am, Cacilhas went back down to the front desk to speak with the manager, but only found another set of front desk staff. "They were well aware of what had happened the night prior, and told me that the manager wasn't there now but that 'everything should be good now' after the room change," Cacilhas said. "But I insisted on speaking with the manager regardless because of the 'major health hazard' of having raw sewage around hotel guests."

So after driving out for some breakfast for the kids, the family spent the morning waiting in their room for the manager, instead of taking the kids to the boardwalk like they had planned.

When Devin, the general manager, called the room around 10:45am, Cacilhas went downstairs to meet him. From the get-go, the GM repeatedly told Cacilhas that he had personally checked the room that morning and found no water on the floor or near the sink. "He was very defensive," Cacilhas said. Devin also asked the maintenance man from the previous night to corroborate his statement, although the maintenance man said there was a little bit of water on the floor.

At the end of the conversation, the GM told Cacilhas, "I'd rather not have you stay here and be uncomfortable here... I'm sorry, I can't have you disrupting my hotel. I'm going to have you checked out of my hotel today."

"I just don't want to go through this another day," Cacilhas says Devin told him, according to an audio recording of the conversation that Cacilhas took (and informed Devin of) during their interaction. "I'm not going to. I tried to work it out, I comped your room last night, which was worth $279." At this point, Cacilhas asked again to show the GM the video footage he had taken the previous night.

Because Cacilhas's 14-month-old daughter had fallen asleep during the exchange, the family didn't leave the hotel until around 1:00pm when she awoke. On their way out, they collected paperwork showing a record of the two nights they had been credited, which the GM said was worth $279 for the first night, paid in cash by Cacilhas using his IHG rewards card. "I’m no[w] scrambling to find a hotel for my family along with [being] on hold with the local health department," Cacilhas posted in the TPG Lounge Facebook group Friday afternoon. "At no time did I raise my voice or anything, yet the general manager decided to kick us [off] the property."

"I was actually able to find another hotel in the Monterey area and salvaged a day there, taking the kids to the aquarium," Cacilhas told TPG, "so the vacation wasn't entirely a waste." But the overall experience, as well as a dismissive follow-up response from IHG via social media, left him displeased enough to leave a negative review on Yelp, where he noticed that another guest had recently left another review with similar complaints over sanitation and [lack of] customer service.

"As an IHG [Spire Elite] member, I'm appalled at the lack of customer service and concern for customer safety," Cacilhas told TPG. "Bringing a health hazard issue to the GM's attention, and having him flat-out refusing to even acknowledge the issue was very disheartening. And both IHG and Holiday Inn Express told me that they felt it was a closed issue. If this is the kind of 'customer care' that IHG truly believes in, it makes me feel that the IHG Group truly doesn't care about their loyal customers."

TPG reached out to IHG for comment. "We are still researching this case with the hotel," said IHG spokesperson Ada Hatzios, "which is independently owned and operated" as of 2014. TPG will offer an update if/when one is received from IHG.

In this situation, Cacilhas most likely will not be able to claim much financial compensation by way of insurance should he choose to do so, either from a premium travel credit card or an independent travel insurance plan. This is because an insurance claim will evaluate the monetary amount spent, and at best reimburse him for the cost of the lost toiletries and damaged items left behind in the room. Since the hotel GM refunded the two nights' stay, any insurance company will see that the family isn't out of pocket for several hundred dollars' worth of unused hotel time overall.

However, this is a case where terrible customer service clearly exacerbated a situation which was already going awry, and the family's poor experience with the Holiday Inn Express Santa Cruz lies squarely on the management's shoulders. In cases like this one, TPG recommends doing exactly what Cacilhas has done: Cut losses in the moment, and try to salvage what's left of the vacation itself by moving to another, safer facility — and then leveraging the power of the consumer voice to hold corporations responsible for their actions and to claim compensation for any loss of goodwill.

August 15 update: IHG reached out to Cacilhas, who shared the message and the voicemail transcript in the TPG Lounge:

"Well again, I want to thank everyone for helping push this issue with IHG. The local franchisee is still refusing to address any of the issues, but IHG executive office has reached out to me. While it doesn’t address the root of the issue of how the hotel handled the sewage spill, it does help cover the lost items. I hope they keep pushing the local ownership group to address their poor management and customer service skills and the handling of a health hazard, I’m glad to say I’m happy that IHG has stepped up did something! Unfortunately I missed their call due to me being overseas, but will be returning their call later."

Cacilhas included a screenshot of the transcript, which has a few errors due to voice-to-text transcription:

An IHG spokesperson told TPG: "We are deeply sorry that the experience Mr. Cacilhas had at this hotel did not represent the true hospitality that we strive to provide to our guests at all IHG hotels each day. Our executive guest relations team has reached out to Mr. Cacilhas to apologize personally. As an additional goodwill gesture, we have provided him with IHG Rewards Club points toward a future stay at any of our properties, with the hope we will have an opportunity to earn back his trust."

The spokesperson also reiterated that the Holiday Inn Express Santa Cruz is privately owned and operated.

All images courtesy of George Cacilhas.