Articles
Max Prosperi is a part-time frequent flyer and travel writer and full-time student. Based in St. Louis, Missouri, Max covers a variety of topics with a focus on points, miles, and aviation.
Follow
May 19, 2019
•
3 min read 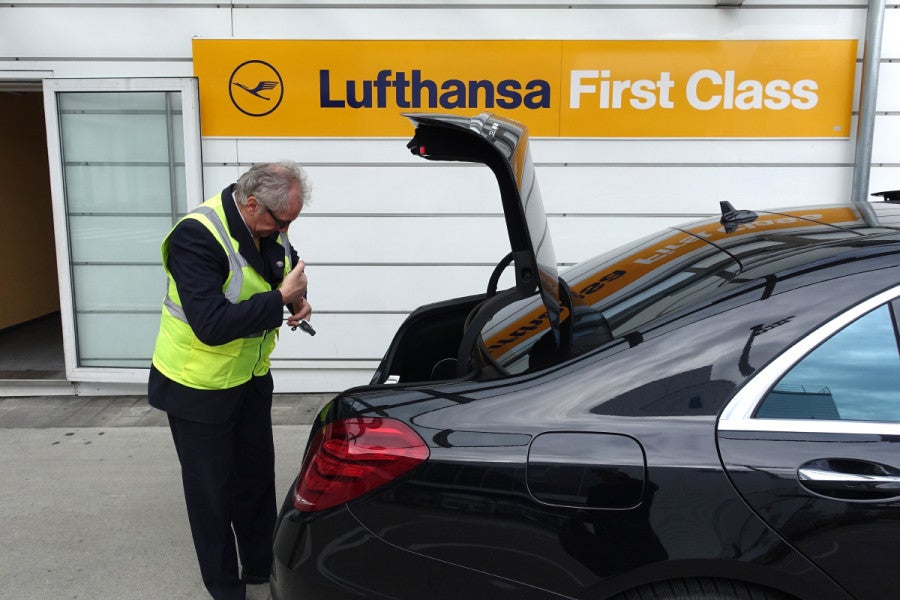 Lufthansa Ditching Mercedes for First Class Transfers
This post contains references to products from one or more of our advertisers. We may receive compensation when you click on links to those products. Terms apply to the offers listed on this page. For an explanation of our Advertising Policy, visit this page.

The Lufthansa First Class experience is about to get a little less luxurious. According to The Frankfurter Allgemeine, Lufthansa is getting rid of its fleet of super luxe Mercedes and adding standard Volkswagen minivans for some first class transfers. While Lufthansa will no longer offer Mercedes vehicles, it will continue to offer Porsche transfers.

Lufthansa is known for the airline's world-renown first class experience, offered on 50 aircraft. This equates to just 400 seats across its fleet. With ticket prices starting around $4,200 round-trip and frequently reaching $10,000+, Lufthansa's first class product comes at a first class price.

Lufthansa First Class is only available from the airline's hub in Frankfurt (FRA) as well as limited flights from Munich (MUC). Frankfurt is home to Lufthansa's stunning and luxurious First Class Terminal. At the terminal, passengers are pampered with meals made by acclaimed chefs, served expensive liquors, offered nap rooms and even bubble baths. Passengers are then brought directly to their aircraft via luxury car transfer.

Until now, Lufthansa has operated a fleet of souped-up Mercedes-Benz and Porsche vehicles for these transfers. Recently the airline made the decision to ditch all Mercedes-Benz, instead adding cars made by Volkswagen AG, which owns luxury carmakers Porsche and Audi. Volkswagen AG, of course, also owns Volkswagen, a far-less luxurious brand. To replace the 108 S-Class Mercedes-Benz vehicles, Lufthansa will add both new Porsches and Volkswagen minivans to its fleet of first class transfer vehicles.

According to The Frankfurter Allgemeine, the Mercedes-Benz used to transfer first class passengers were part of a partnership with the auto-manufacturer. The partnership between the two companies allegedly cost Mercedes millions. The Frankfurt news outlet also noted service issues as a contributing factor to Lufthansa's decision to cut Mercedes-Benz from its fleet of vehicles.

With Mercedes-Benz no longer wanting to foot the bill and Lufthansa fed-up with service issues, the airline turned to Volkswagen AG for replacements.

While, arguably, not a massive blow to Lufthansa's first class product, frequent first class flyers at the airline will likely notice the change. However, with the possibility of ending up in one of the Porsches being added to Lufthansa's fleet it's not all bad news.

This post has been updated since publishing to correct the airports that offer Lufthansa first class.