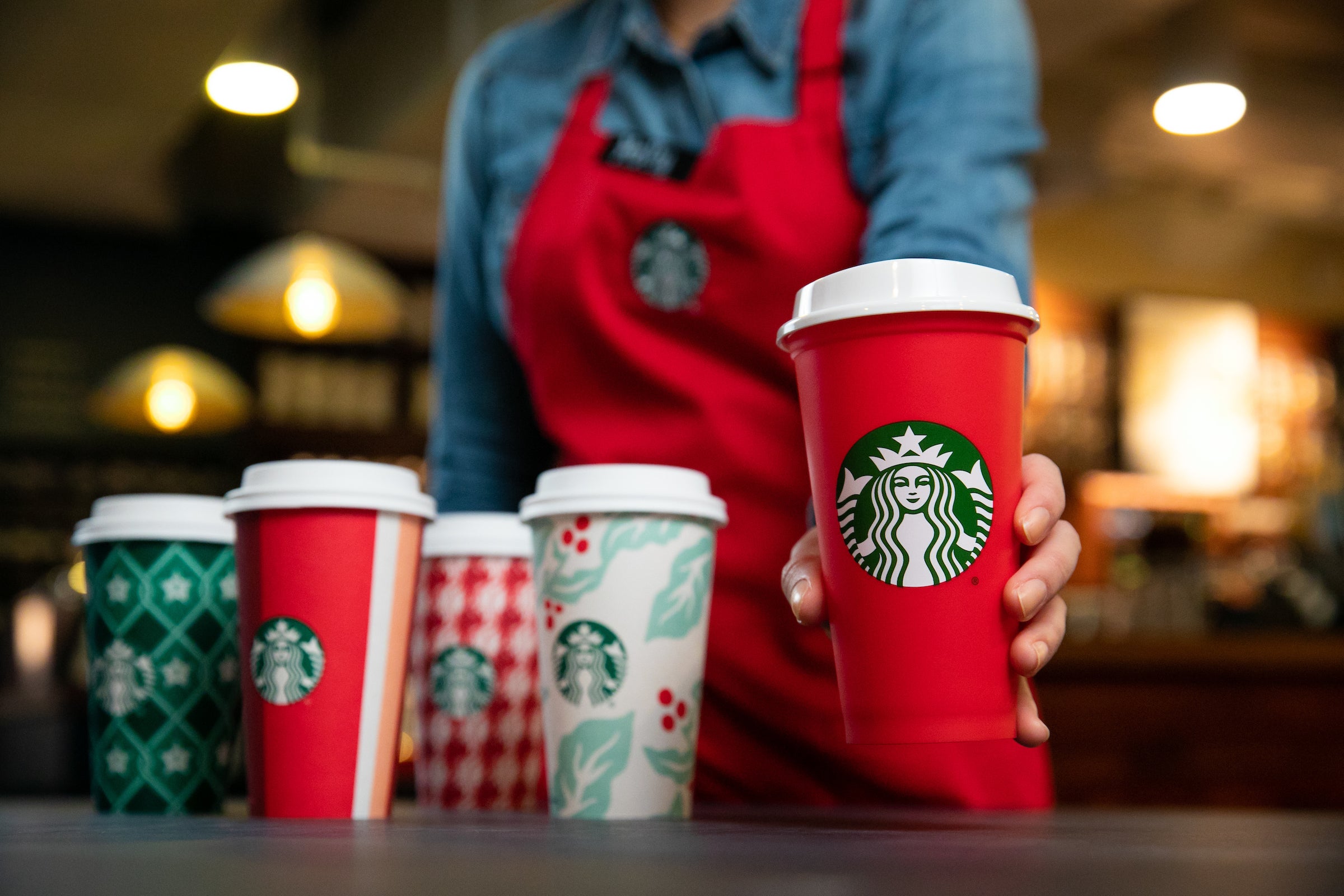 It Took Only 2 Hours for This Year's Starbucks Holiday Cups to Cause Controversy
This post contains references to products from one or more of our advertisers. We may receive compensation when you click on links to those products. Terms apply to the offers listed on this page. For an explanation of our Advertising Policy, visit this page.

Within two hours of the launch of this year's Starbucks holiday cup on Friday, the coffee behemoth was embroiled in a Christmas-related controversy yet again — this time because there were so few cups to go around.

What's more, at least one eagle-eyed caffeine fiend who actually got her mitts on a red Starbucks cup noticed that Starbucks employees fill it up by using, and then tossing out, a regular paper cup, meaning that the holiday cup may create more waste than if you'd never gotten it at all.

It wasn't supposed to be this difficult. Unlike the paper holiday cups with designs so bland they seem engineered to avoid previous years' controversies, the red, reusable holiday cups come with 50-cent discounts on medium-sized Starbucks holiday beverages through Jan. 7. It was only available at stores on Nov. 2, so those who missed their mocha frappuccinos Friday theoretically have to wait till 2019's holiday season for another reusable-holiday-cup fix.

Problem is, many Starbucks stores ran out of the red cups within minutes of opening, leaving furious, caffeine-deprived coffee addicts to lambaste the company on social media. Eater rounded up a few choice posts from angry customers, including one woman who said that the cups at her local Starbucks were gone by 7:09am, and another who pointed out that she couldn't get the cup even though she was only the second person to use the drive-thru that day.

"My mother was charged $2.50 plus tax for the free cup today in a Wisconsin store," reader Primal Travel wrote. "The store told my mother that they ran out of the designated stock of free cups."

To add insult to injury, even if you did get the cup, you might notice that baristas still use a paper cup to make your drink then discard the paper cup after pouring your drink into your red holiday cup. That's what happened to TPG Family editor Summer Hull.

"I managed to snag one at a Houston-area store around 10am, and was excited to save 50 cents on holiday drinks the rest of the season and save a few paper Starbucks cups making their way to the landfill," she said. "However, the 50-cent savings is only valid after 2pm, and, more interestingly, when I was ordering a holiday drink this week, it was served in a paper cup [then poured into] my reusable Starbucks cup. So much for saving a few trees. What was the point of this?"

After publication, Starbucks responded to TPG with the following statement:

We are seeing an enthusiastic response to the return of Holiday beverages and cups at Starbucks, and to Friday’s limited-edition giveaway of our reusable red holiday cup. Each store had a limited supply for Friday’s one-day giveaway, and we’re aware that some stores ran out. While supplies last, customers can purchase the reusable red holiday cup for $2.50 in stores, and can bring their cup back all season long to receive $.50 off their grande (16 oz) holiday beverage order, through Jan. 7.

We are humbled by how passionate our customers are about Starbucks holiday cups. They’ve become a symbol of the season for more than two decades, and this year we unveiled four newly-designed cups adorned with retro-graphic patterns, called Stripes, Flora, Espresso Houndstooth and Stargyle. The Starbucks Creative team found their inspiration in one of Starbucks most time-honored traditions: Starbucks Christmas Blend. When dreaming up holiday plans more than 18 months ago, they passed around one-pound coffee bags of the beloved brew, and took cues from some of these historic designs.

Finally, our reusable holiday cups are part of our larger commitment to sustainability. We’re encouraging our customers to make a simple shift of bringing in a reusable cup when visiting Starbucks during the holidays and throughout the year, as we’ve done for more than thirty years. Starbucks baristas should craft beverages directly in customers’ reusable cups whenever possible.

If you are still looking to make Starbucks purchases despite the cup controversy, be sure to use a card that will earn you optimal points on your caffeine spend, like the American Express® Gold Card (4x on dining), Chase Sapphire Reserve (3x on dining) or any of these cards.

Though Starbucks hasn't said if they will be doing anything to make up for debacle, the cup-deprived might want to consider traveling instead.

Related stories
What are points and miles worth? TPG’s December 2022 monthly valuations
Capital One Venture X to lose Priority Pass restaurants and spa services as of Jan. 1, 2023
December 2022
Current Hyatt promotions: Bonus points on stays and dining plus double stay credits
Featured image by Starbucks
Editorial disclaimer: Opinions expressed here are the author’s alone, not those of any bank, credit card issuer, airline or hotel chain, and have not been reviewed, approved or otherwise endorsed by any of these entities.