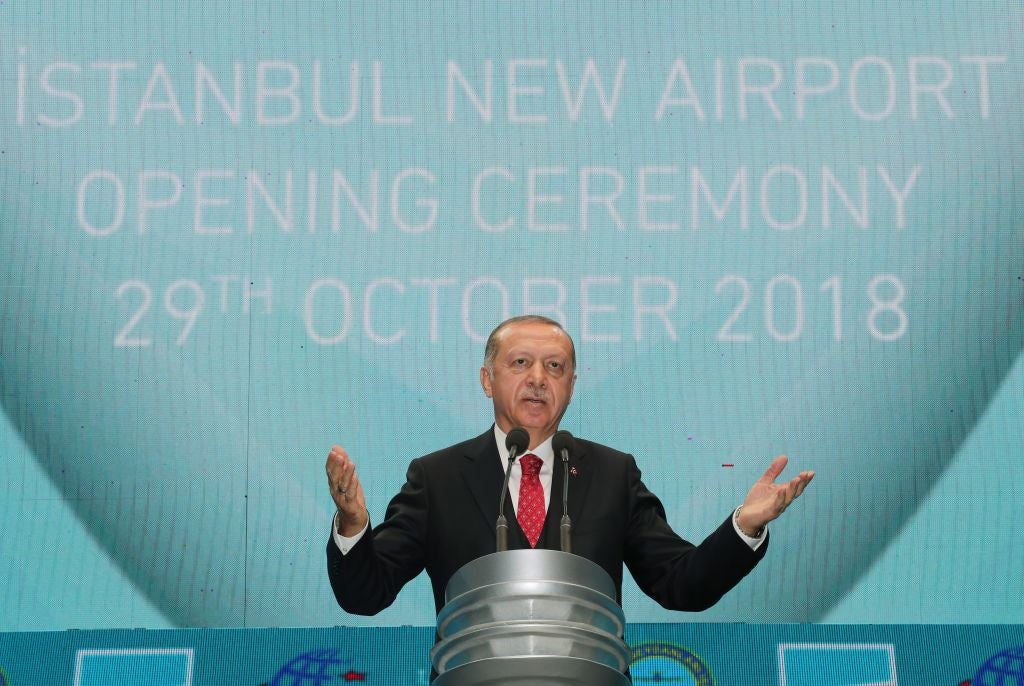 How Istanbul's Controversial New Airport Is Helping Turkish President Erdoğan
This post contains references to products from one or more of our advertisers. We may receive compensation when you click on links to those products. Terms apply to the offers listed on this page. For an explanation of our Advertising Policy, visit this page.

“This is not just an airport, it is a victory monument,” said Turkish President Recep Tayyip Erdoğan of Istanbul's much-awaited new airport. The quote was found on ads plastered throughout the city in the days leading up to the opening ceremony of the airport, which is being touted as the world's future largest airport. (TPG News Editor Emily McNutt was on hand for a peek at the airport days before its soft opening on October 29.)

The soft opening itself was less victorious, however, given that the plan to close the city's main airport, Atatürk, and have the new one fully up and running fell behind schedule. A small number of flights have taken off thus far, and construction is ongoing, with revised plans to close Atatürk by the end of the year.

The airport — whose three-letter code is the temporary ISL, before taking over the far more iconic IST from Atatürk — has also been mired in controversies, namely reports of fatal accidents and substandard working conditions. One union leader called the airport a “cemetery,” blaming the frequent deaths on the struggle to finish in time for the deadline of October 29, Turkey's republic holiday. At least 38 people have died on the construction site in work-related accidents, according to Safety Labor Watch Turkey (ISIG).

In September, thousands of workers walked off the job and protested the poor working conditions, including unsanitary quarters, bedbug-ridden dormitories, terrible food, and infrequent shuttle services. Some workers had reportedly not been paid for as much as six months. The protests were dispersed by police, and hundreds of the workers were taken into custody.

The chief executive of Istanbul Grand Airport or IGA, the company that is building the airport and will operate it for 25 years, eventually admitted that the workers were right and that he was unaware of the grim conditions, but did not respond to a request from Human Rights Watch for a statement regarding the dozens of workers who still remain behind bars.

The airport has the potential to be world's largest in terms of passenger capacity, which is expected to reach 200 million once all phases are complete in 2028. (The current world leader, Atlanta, does just over 100 million a year; Beijing is just behind at 95.) The Turkish fact-checking website Teyit noted in a report that in terms of area, the Istanbul airport would rank as the world's third-largest behind airports in Denver and Saudi Arabia. Built for just shy of $12 billion, it will continue to be developed in multiple phases over the next two decades.

It is no coincidence the opening was held on Turkey's republic holiday. The ambitious Marmaray undersea railway opened on the same day five years ago. Erdoğan loftily declared the latter to be among his projects that are the objects of Europe's jealousy.

“It is a long-held belief in Turkey that outsiders, particularly Europe and the US, but also nebulously defined Jewish interests and Christian cabals, are invested in weakening Turkey in order to take control of its vital resources and geo-strategic position,” said Jenny White, Professor at the Stockholm University Institute for Turkish Studies.

“In the minds of his supporters, President Erdoğan's mega-construction projects are signs of Turkey's economic strength and its modernity, despite the West's attempts to neutralize them,” she added.

These controversial projects play a vital role in Erdoğan's political vision, which is steeped in Ottoman nostalgia.

“Nations that were great empires once often have a malleable and exaggerated sense of their glory days, and a vulnerability to be manipulated and misled sometimes by effective politicians espousing this narrative,” said Soner Cagaptay, Senior Fellow at the Washington Institute for Near East Policy and author of “The New Sultan: Erdoğan and the crisis of Turkey."

“I believe [Erdoğan]is out to make Turkey great again, and that's why his base adores him. His idea of making Turkey a great power resonates very closely with a very large part of the Turkish population,” Cagaptay added.

There is no doubt that Istanbul needs a new airport. Anyone who has waited in the impossibly long passport line at the main Atatürk airport can attest to this. That airport no longer can withstand the heavy passenger flow, and Erdoğan has vowed to transform it into a city park once it closes. The Sabiha Gökçen airport (SAW) on the outskirts of Istanbul's Asian side opened in 2001 and has expanded over the years, although its number of domestic passengers is now double that of international travelers. The new airport serves the purpose of both fulfilling an important need as well as acting as a triumphant political achievement for the Turkish president.

“Infrastructure and statues play an important role in drumming up nationalistic sentiments, and Erdoğan most certainly understands it. His base has a very vague idea about 'the West,' and usually focuses on 'tangibles,' as opposed to 'intangibles' like democracy, freedom of speech, quality of education and the like. So, in such a discursive landscape, big projects like these provide Erdoğan’s base to have something they can physically see,” said Burak Kadercan, Associate Professor of Strategy and Policy at the US Naval War College.

But the environmental consequences have been severe. The airport's construction in conjunction with another controversial project, the third bridge over the Bosphorus that opened in 2016, have come at the expense of the the city's northern forestlands that lie at the edge of the Black Sea. The projects have swallowed up swathes of green space in a city that continues to lose it at a startling pace due to rapid development.

Transportation is currently a major concern, as planned subway routes connecting the airport with the city are yet to be completed. There are several public bus lines that reach it, but each makes several stops and takes at least an hour and a half. The transit website advises passengers to board at 5:30 AM if they have to catch a 9:25 AM flight. Though the subway will provide quick and efficient transportation to and from the airport once it starts running, until then travelers will either have to fork out a hefty cab fare or plan for the long bus ride.

Leading up to the opening, there was no small debate over what the airport would be called. Many thought Erdoğan would name it after himself, while other rumors indicated that it would named after Ottoman Sultan Abdulhamid II. Some insisted that like its predecessor it should bear the name of Atatürk, the founder of modern Turkey. However, Erdoğan may have ultimately opted to steer clear of this dispute, and it came as much surprise when he announced the name to be simply Istanbul Airport.

One thing that will be interesting to follow for US flyers is whether any US airlines will return to the new airport after the last one, Delta, pulled out in 2016. The only direct flights from the United States to Istanbul are on Turkish Airlines. The IGA CEO, Kadri Samsunlu, said he's hopeful that Delta will return. Regardless of that, and whether or not it really becomes the world's largest, the new airport will figure prominently in aviation in the coming decades — if nothing else as the new home base for Turkish Airlines, which serves more countries than any other airline in the world.