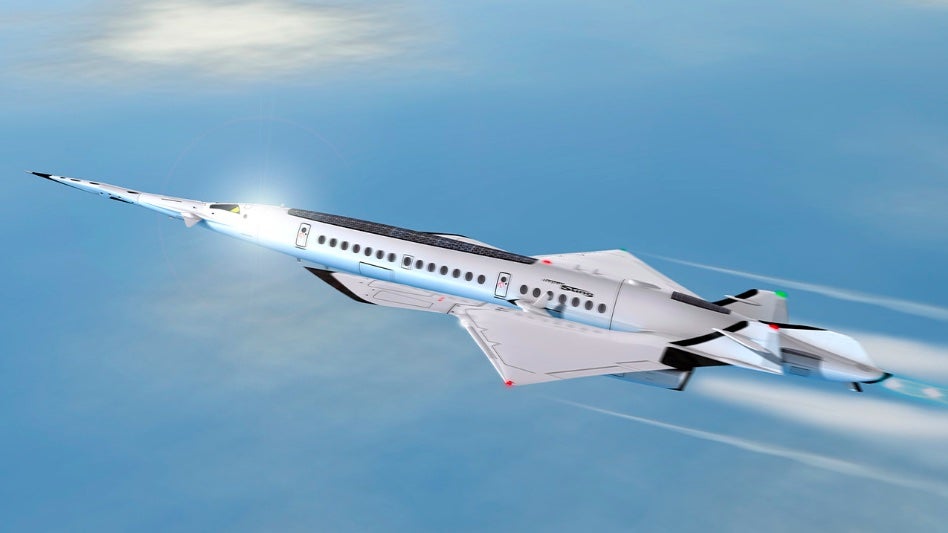 Imagine flying from London to New York for a lunch meeting, and being home again in time for tea.

Well, that could soon become a reality for transatlantic business travelers if one aviation designer gets his way. Don’t pack your bags just yet, though.

Spanish designer Oscar Viñals claims his latest invention could spirit passengers across the Atlantic at three times the speed of sound, making a trip from Britain’s capital to the Big Apple in less than 80 minutes flat.

The theatrically named “Hyper Sting” would not only be twice as fast as London-to-New York record-holder Concorde — which managed the route in two hours and 53 minutes — but it would also be almost twice the size.

Concorde measured only 200 feet, could carry 100 flyers and had a top speed of 1,354 mph. Meanwhile, an average commercial aircraft currently flies at 460 to 575 mph.

It would mean a trip from London to New York would take about as long as a subway ride from the Bronx to Brooklyn.

How will it work?

The aircraft’s success as the fastest commercial passenger plane in history lies firmly on the as-yet untested theory of cold fusion via a "cold fusion nuclear reactor" that would power two ramjet engines and four next-generation hybrid turbojets.

Viñals claims that his vision for a new dawn of high-speed air travel would be capable of hitting Mach 3.5.

Related: 'The most fascinating machines ever made': How jet engines work

Currently, such innovative technology is the preserve of the military. The fastest aircraft ever to shoot through airspace is the now-retired North American X-15, which reached a face-melting speed of 4,520 mph (Mach 6.7) on Oct. 3, 1967 — 55 years ago.

When will it work?

Among a number of questions that hang over the Hyper Sting’s future is one about its financial viability — what are the production costs of such a jet, given the issue that ultimately led to the demise of Concorde?

Related: Key travel tips you need to know — whether you’re a beginner or expert traveler

Viñals, however, remains bullishly unburdened by the significant doubt over his idea from the aviation community.

“Concorde was a brilliant piece of machinery, a noble experiment, but it put too many emissions in the environment, too much noise into our communities, and was too expensive to operate," he explained.

“A new era of supersonic flight might be just around the corner, but there are challenges to overcome when it comes to flying faster than the speed of sound. The Hyper Sting is a new concept for future supersonic commercial airplanes,” he added.

He does admit, however, that “supersonic flights will return, but in this case due to some very innovative systems, like the cold fusion reactor, the date of a possible production, would be over 2030 and the cost would not be cheap.”

While the idea currently only lives inside Viñals’ imagination, it revives a dream that has left aircraft designers stroking their chins since the 1950s: How can you fit a nuclear reactor into an aircraft?

The invention of nuclear reactors in the 1950s brought the promise of cheap travel, not to mention the possibility of planes staying airborne for days at a time, even months. The only hurdle was making it safe.

It began on boats, then — as the technology shrunk — it found its way onto submarines. Submarines can now cruise below the sea at high speeds for decades without ever needing to refuel.

Making a nuclear reactor flightworthy, however, has proven a far more challenging conundrum. It starts with preventing the reactor from spewing out lethal radioactive particles into the bodies of passengers and crew. The casing required would be too heavy for a plane to take off.

Next, therefore, was the issue of scale — how can you shrink a reactor to fit aboard a plane?

It began in America as the Cold War was gaining speed with the establishment of the Aircraft Nuclear Propulsion program. Between 1946 and 1961, huge teams of engineers ground away in a whirl of blueprints and chalk dust trying to unlock the secret of perma-flight.

In the end, only one aircraft has ever successfully carried a nuclear reactor on board — the Convair NB-36H in the late 1950s. However, it was never powered by the reactor. It only carried it to see what effects it might have on the flight and crew.

Related: Could the beleaguered A380 be the key to unlocking fossil-free flying?

In 1961, newly elected President John F. Kennedy canceled the program. “Fifteen years and about $1 billion have been devoted to the attempted development of a nuclear-powered aircraft; but the possibility of achieving a militarily useful aircraft in the foreseeable future is still very remote,” he said.

Technology has moved on since then, and a number of attempts to harness nuclear power have begun. Still, we have yet to see one get off the ground. As for high-speed aircraft, there are other ideas. This summer, Boom Supersonic announced plans to put a plane in the skies that could travel at speeds of 1,304 mph.

Related: Concorde at 50: Faster than a speeding bullet

Dubbed the Boom Supersonic Overture, it has four wing-mounted small engines with “gull wings” to improve speed and stability, and it could fly from London to New York in 3 1/2 hours.

Though that’s still a little way off, too. Boom confirmed production should begin in 2024, with the jet being produced in 2025. It could then be another four years until the jet’s ready for passengers, but the company states it should be by 2029.

“Aviation has not seen a giant leap in decades. Overture is revolutionary in its design, and it will fundamentally change how we think about distance," Boom founder and CEO Blake Scholl said.

“With more than 600 routes across the globe, Overture will make the world dramatically more accessible for tens of millions of passengers.”

While technological advancements in aviation are nothing new, an enormous number of hurdles remain before the Hyper Sting could take to the skies. It’s an exciting prospect, but don’t pack your bags just yet.

Featured image by OSCAR VIÑALS
Editorial disclaimer: Opinions expressed here are the author’s alone, not those of any bank, credit card issuer, airline or hotel chain, and have not been reviewed, approved or otherwise endorsed by any of these entities.