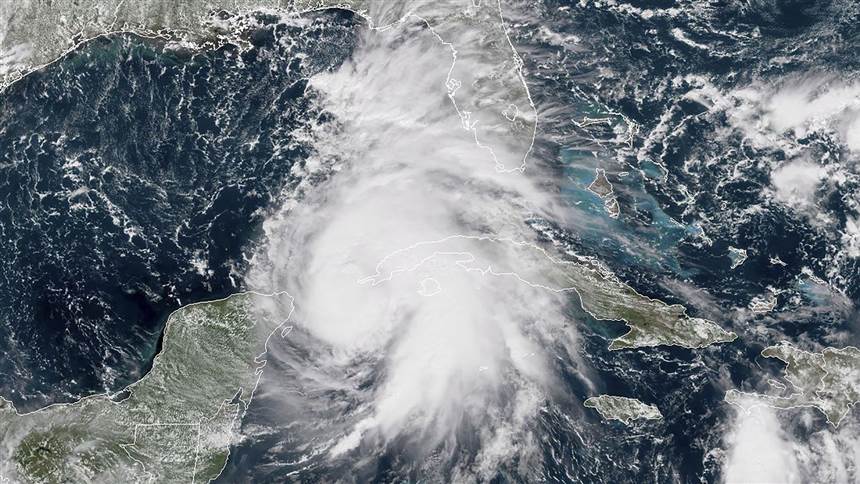 After a brief hiatus overnight, Hurricane Michael began strengthening again Tuesday morning. As of the 11am ET advisory, the hurricane has intensified to 110mph top sustained winds — nearly a Category 3 hurricane on the Saffir-Simpson scale — with its minimum pressure dropping again to 965 millibars.

The latest forecast calls for continued strengthening to 125mph top sustained winds before making landfall on the Florida Panhandle on Wednesday afternoon. If it makes landfall as expected as a Category 3 major hurricane, this would mark just the third major hurricane to make landfall in the continental US in the past 13 years.

Although the hurricane winds will be very destructive at the point of landfall, the real threat from Hurricane Michael is the life-threatening storm surge. Due to the shaping of the Florida coast, Hurricane Michael will continue to funnel rain into the coast, causing disastrous storm surge of up to 12 feet. The current storm surge forecast is:

And the storm surge has already begun on the Florida Panhandle. Although the center of the hurricane is still more than 300 miles, the tide in Apalachicola, FL are more than two feet higher than the predicted tide level:

While the main flooding threat from Hurricane Michael is going to be from storm surge, there's also the potential for some flash flooding from the powerful hurricane's rain. A total of 6-10 inches of rain are expected across a wide swath of the Southeast, with some of the areas hard hit by Hurricane Florence getting another round of rains on top of already-saturated ground.

Flight cancellations are already starting for Hurricane Michael. According to FlightAware's cancellation tracker, there's 295 US flights cancelled on Tuesday, 79 cancelled for Wednesday and 9 cancelled already for Thursday. Here's the total number of cancellations for Tuesday-Thursday for airports in the path of the storm:

There are a number of closures occurring in anticipation of the storm's arrival — including beaches, schools and universities:

Airport closures haven't been as widespread yet. Destin-Fort Walton Beach Airport (VPS) was the first commercial airport to announce its closure, effective 12:01am on Wednesday morning:

In addition, nearby airports of Destin Executive Airport (DTS) and Bob Sikes Airport (CEW) will also close at 12:01am Wednesday morning.

Northwest Florida Beaches Intl (ECP) near Panama City, FL hasn't announced an airport closure, but warns passengers that "upcoming flight schedules at ECP will be impacted. Please check with your airline for any flight-related questions and before heading to the airport." However, considering ta the airport is under a mandatory evacuation, it's unlikely that commercial flights will operate for much longer.

So far, Delta is the only airline to cap airfares. From Tuesday through Thursday, Delta will charge no more than $299 for economy and $499 for first-class tickets for one-way flights to/from Pensacola, Panama City, Destin, Fort Walton Beach, Tallahassee and Mobile.

Due to the storm's quick movement — and the location of major airports along the predicted path — widespread travel disruptions are possible for Wednesday and Thursday. Thankfully, airlines have started issuing waivers to allow flexible travelers the chance to rebook out of the path of the storm.