Articles
Emily McNutt is The Points Guy's Global News Editor and is based in London.
Follow
Dec. 10, 2018
•
4 min read 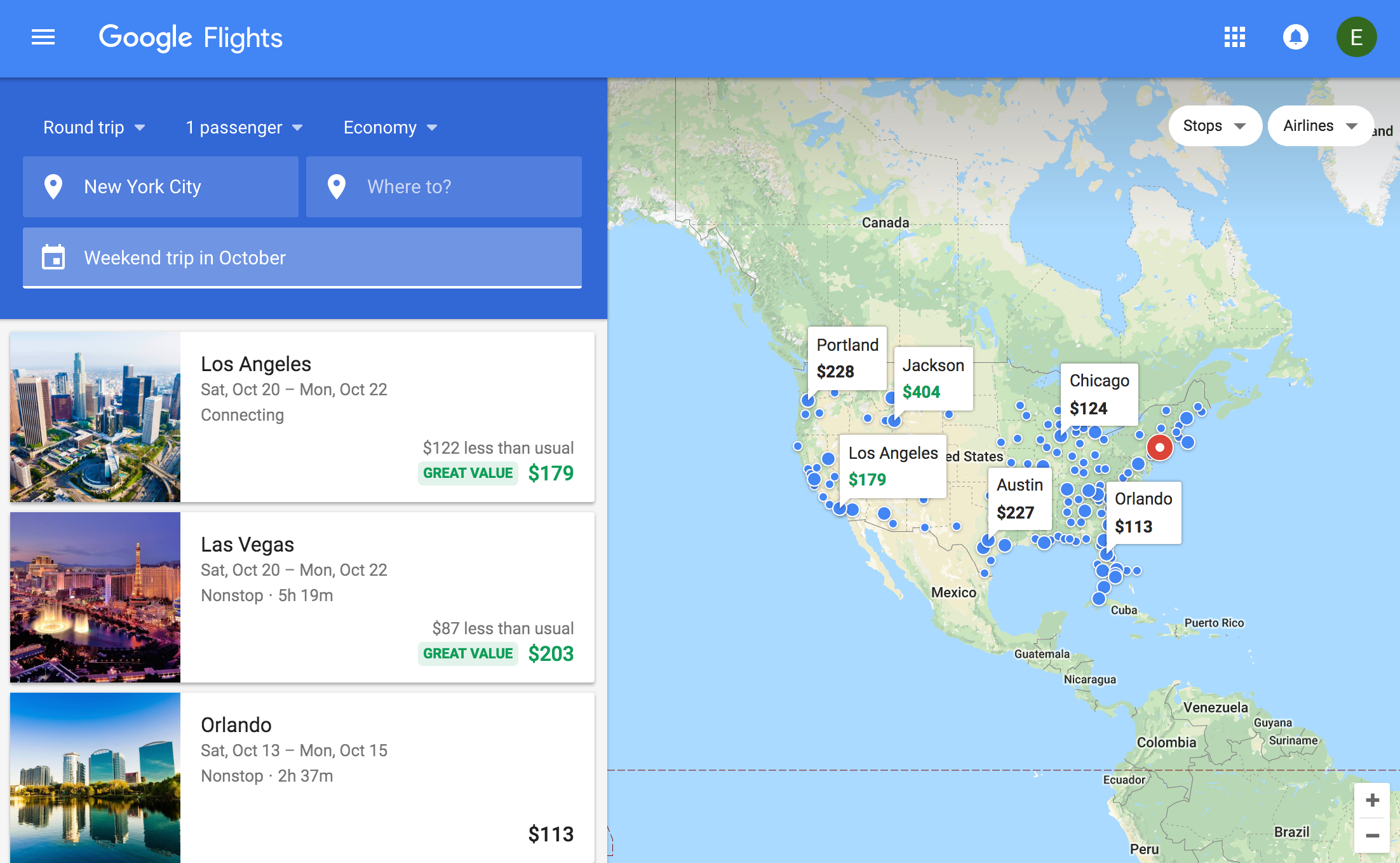 Google Flights Introduces 2 New Features to Help You Find the Cheapest Fares for Holiday Travel
This post contains references to products from one or more of our advertisers. We may receive compensation when you click on links to those products. Terms apply to the offers listed on this page. For an explanation of our Advertising Policy, visit this page.

Google is continuing to add power to its intuitive Flights platform, helping to set it apart as the premier booking engine for air travel. On Monday, Google announced that Google Flights would be getting two new functions, as well as providing travelers with information to help you to decide when is best to book your Thanksgiving travel.

With Monday's announcement, Google has placed an emphasis on helping travelers to plan for holiday travel. Using data from Thanksgiving travel 2017, Google has compiled a new database for travel on the 25 most popular routes. The tool shows how round-trip airfare changes based on both the dates of travel (i.e. if it's cheaper to return on Tuesday or Wednesday after the holiday) and how early in advance you book.

For example, if you're looking to travel from New York to Los Angeles for the Thanksgiving holiday, you'll be able to see, based on 2017 data, if the cheapest time to book is 160 days out or the day before. As it turns out, the lowest airfare based on a specific departure and return dates came about 80 days out.

The new Travel Trends tool allows you to look up historic data for the Thanksgiving holiday, but also for the December holidays and New Years. With the tool, Google is also allowing travelers to look at which cities are generally offering discounted hotel deals. So, if you have flexible travel plans and want to base where you go off of how much you'll save on a hotel room, the new insights tool will be able to help maximize.

In addition to introducing the Travel Trends tool for holiday travel, Google has also introduced two new features to its popular Flights product:

See How Your Fare Stacks Up

With the first new tool, Google again is utilizing its data from 2017 to help you plan holiday travel. For just Thanksgiving, Google is using data to let you know if the price you're seeing is "good." More specifically, you'll see on a graphic if your fare is unusually low, typical or if it's high.

The new feature is only available on Google Flights' mobile interface, so you won't be able to use it when on a desktop.

Finding Deals in the Explore Map

The second tool Google Flights introduced on Monday builds out on an existing tool — the popular Explore Map. While travelers have long been able to select dates and a departure city and scroll across the Map to find a cheap fare that works for them, the new functionality allows you to expand your searches.

If you're flexible on your destination and dates of travel, you can more broadly select your preferred time of travel. For example, a weekend in October, departing from New York City. The tool will then search and let you know if there are any deals that fit your search criteria and how much cheaper those deals are than usual.

Unlike the other features Google announced on Monday, this new Explore Map feature is available to help you book spontaneous travel year-round.

Since launching in 2011, Google Flights has been constantly updated to make it the go-to search engine for frequent travelers. In addition to adding more functionality and features, the interface underwent a major refresh late last year.