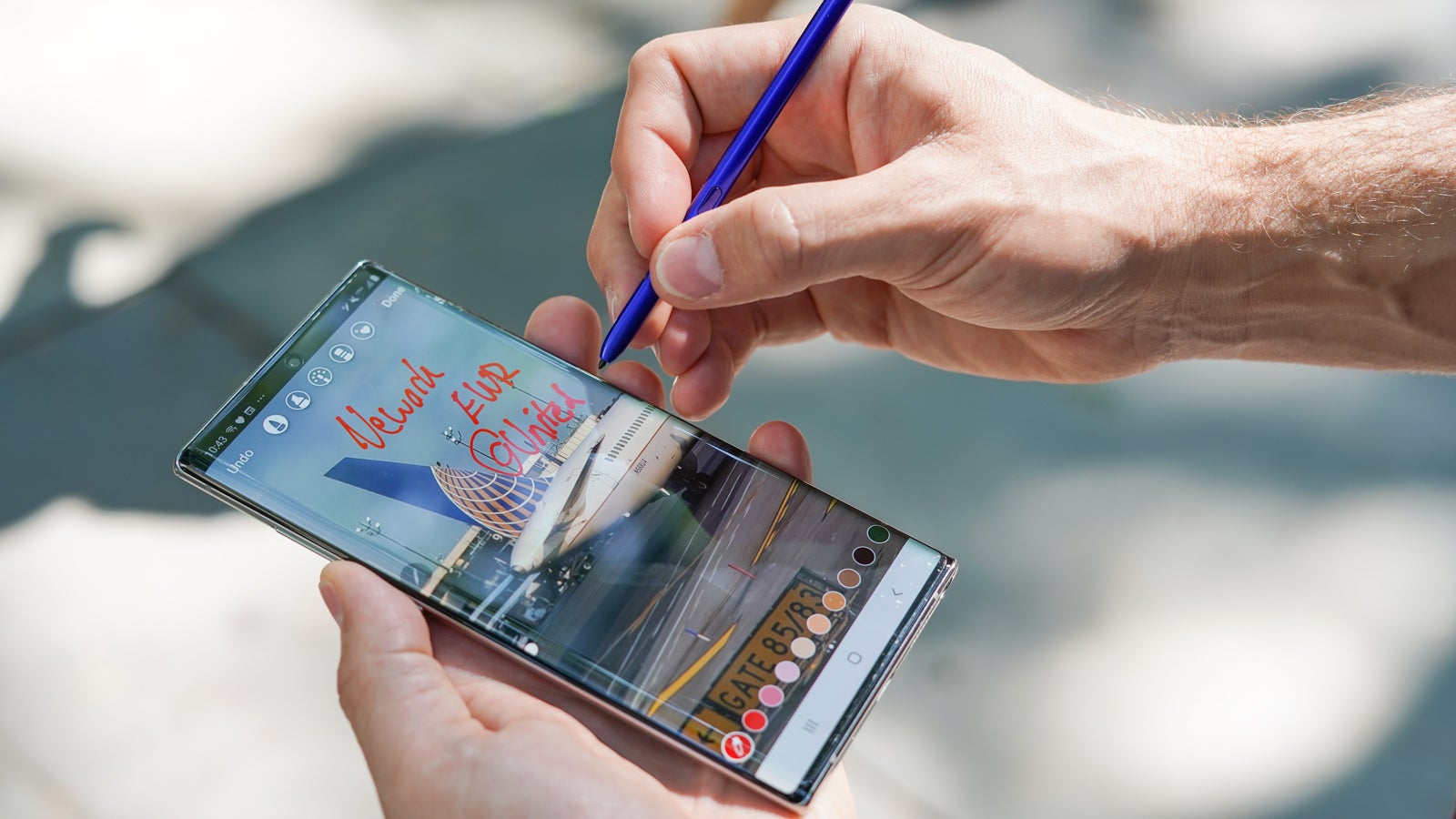 Many of us spend more waking hours with our smartphones than our families, pets and friends — sometimes all of them combined. So, naturally, we put a lot of thought into choosing the right device. I, for one, have been an iPhone user since Apple released the world's first true smartphone way back in 2007. As an editor at PC Magazine and then Engadget, I tried a variety of devices over the years — Windows Phones, countless Android devices, even a BlackBerry or two — but iOS has remained my go-to.

The iPhone can't do it all, though. Recently, I've been carrying a Google Pixel 3 XL around for low-light photography, but after spending a few days with Samsung's new Galaxy Note10+ on a long-weekend trip to Nova Scotia, I'm seriously considering making a permanent switch — if there's one smartphone out there that can do most of what a frequent traveler would ever need, it seems like this one's it, as even some of the most thorough power-users agree:

Here are a few reasons I'm thinking about making a move, and why you might want to, too.

It's rare that I completely run through my iPhone XS Max's battery when I'm on the road, as long as I also have the $129 Smart Battery Case attached, but it does happen — especially when I'm snapping tons of review photos on a long-haul flight.

I did my best to keep the Note's charger hidden away in Canada, though, and managed to get through a full day without (too much) stress, including an early morning trek from Manhattan to Newark Airport (EWR), a flight to Halifax (YHZ) where I watched an episode of Stranger Things on Netflix, some light Google Maps navigation, lots of photo and video shooting and on-and-off smartphone tethering (with a variety of fairly active devices) over the course of a four-hour drive.

When the battery does run out, meanwhile, charging it up can be super quick — as long as you use the bundled adapter, you can expect a full charge in roughly an hour.

The Galaxy Note even sports a neat party trick — activate Wireless PowerShare and the device instantly becomes a Qi-enabled charging pad, letting you wirelessly charge any compatible device (yes, even an iPhone):

Delta and JetBlue have committed to offering seat-back entertainment, but many airlines around the world havefshifted to a "bring-your-own-device" streaming model, instead. That means passengers will likely end up watching movies and TV shows on their smartphones, or a tablet if they happen to have one in their bag.

That's one reason I'd likely opt for the larger Note10+ — that 6.8-inch screen definitely gives in-flight viewing a boost, compared with the 6.3-inch display on the smaller Note10. The larger device has a much sharper screen as well, at 3040 x 1440 pixels, compared with 2280 x 1080 on the Note10, but both displays have higher resolution than the content you'll be streaming from your plane's Wi-Fi, anyway.

A bigger display means a bigger viewfinder for photographers and videographers, though, and the Note10+'s screen is much closer to 4K resolution, potentially giving users a more accurate representation of the finished product as they shoot.

I often hear people say "the best camera is the one you have with you," and while that expression has served its purpose over the years — especially back when smartphone cameras were "just okay," at best — the Galaxy Note10's camera really will be the best cam that many of its users actually own.

In fact, the Note10+ doesn't just have a camera — it has five, including a 10-megapixel selfie camera at the top of the screen, along with a 16-megapixel ultra-wide camera, 12-megapixel wide-angle cam and a 12-megapixel telephoto all on the back. The larger Note10+ sports a DepthVision camera as well, that you can use to measure objects and eventually — after a software update — capture a 3D rendering. Most users will focus their efforts on the four primary cameras, though.

I've been testing the "Aura Glow" color, which sports a super-slick colored back. When the light hits it just right, you can see a rainbow of colors — it's really something else.

There's one potential downside to all that color, though — you might end up picking up some fun (but distracting) accents when shooting through glass and into the sun, as I did at Newark Airport below.

And, unfortunately, there can be significant distortion when shooting in close quarters with the wide-angle lens. It'll still give my flight reviews a boost, but I imagine I'll need to crop out some edges more often than not.

That said, this really is the best camera I've ever used on a smartphone — low-light photos aren't quite as bright as they are when captured with Night Sight on the Pixel 3, but I find them to be more realistic here.

And certainly sharper than what you'll get with the iPhone XS Max:

The Note10 adds a number of especially useful video-shooting options, including some that seem to have been designed with vloggers in mind. The first is Live Focus, with four video effects, including the effective "blur" option below.

While I don't see myself shooting too many video selfies, I use my phone to capture airplane cabin tours all the time. Samsung's new-and-improved Super Steady option will definitely come in handy — just look how smooth this is!

Samsung calls its stylus the "S Pen," but I have a different name for it: the Social Media Stylus. No longer do I need to draw text and various shapes in Instagram Stories with my stubby fingers — the pen's precision makes it so much easier to write and draw clearly, without the multiple "do-overs" I've become accustomed to on Instagram.

It also serves as a shutter button for remote selfie shots, and a mix of sensors even turn it into a magic wand of sorts, letting you use gestures (that I haven't yet mastered) to change shooting modes from a distance. It worked well on my Nova Scotia adventure — I brought along my $20 Amazon tripod, set up the shot then stepped into frame with my friends.

I tried out Samsung's updated DeX Mobile Desktop option, which now only requires downloading software and connecting your Note to a Mac or PC using the bundled USB-C cable. I tried it myself and it worked well — being able to access Android apps from my desktop is definitely a plus, though perhaps not quite a headline feature.

Samsung also highlighted the device's gaming chops, but I don't see myself playing Call of Duty on the subway anytime soon. There are endless options for gamers, though.

I was bummed to discover that Samsung did away with the headphone jack, though. I have Bluetooth headphones, sure, but I use a wired noise-canceling set on planes, too. And, to make matters worse, there wasn't even a 3.5mm adapter in the box. Some may find the small "hole-punch" selfie camera up front distracting, too, though at least the fix is easy there:

Unlike some other flagship smartphones, you can actually expand your storage with the Note10+ — the larger device supports up to 1TB of additional storage via a microSD card, so you don't have to worry too much about opting for more internal storage here. That said, you'll only pay an extra $100 to double your base storage to 512GB, so it could be worth the investment, especially if you plan on capturing tons of 4K video.

As for where to buy? You'll have access to the greatest variety of options directly through Samsung, but you might also want to consider shopping through a site that offers bonus points or cash back via an online portal. And be sure to order your device using a card that offers purchase protection, including:

The information for the Chase Freedom has been collected independently by The Points Guy. The card details on this page have not been reviewed or provided by the card issuer.

Meanwhile, after the phone is linked to your mobile account, you'll want to be sure to pay the bill with a card that offers cell phone loss and damage protection, including the options below:

Stay tuned for my full review, including one big reason I'm still slightly hesitant to give up my iPhone, despite Samsung's enormous win here.

Related stories
Are dogs allowed on cruise ships? These are the cruises that allow pets
Monthly checklist: Credit card perks and benefits you should be using in December
Maximize your seasonal spending with these 5 credit cards
Always wanted to own a giant cruise ship? Here's your chance
Featured image by (Photo by Orli Friedman/The Points Guy)
Editorial disclaimer: Opinions expressed here are the author’s alone, not those of any bank, credit card issuer, airline or hotel chain, and have not been reviewed, approved or otherwise endorsed by any of these entities.