Articles
Katherine Fan is a former senior travel features reporter at The Points Guy who covered everything from personal finance to travel and aviation.
Feb. 18, 2019
•
4 min read 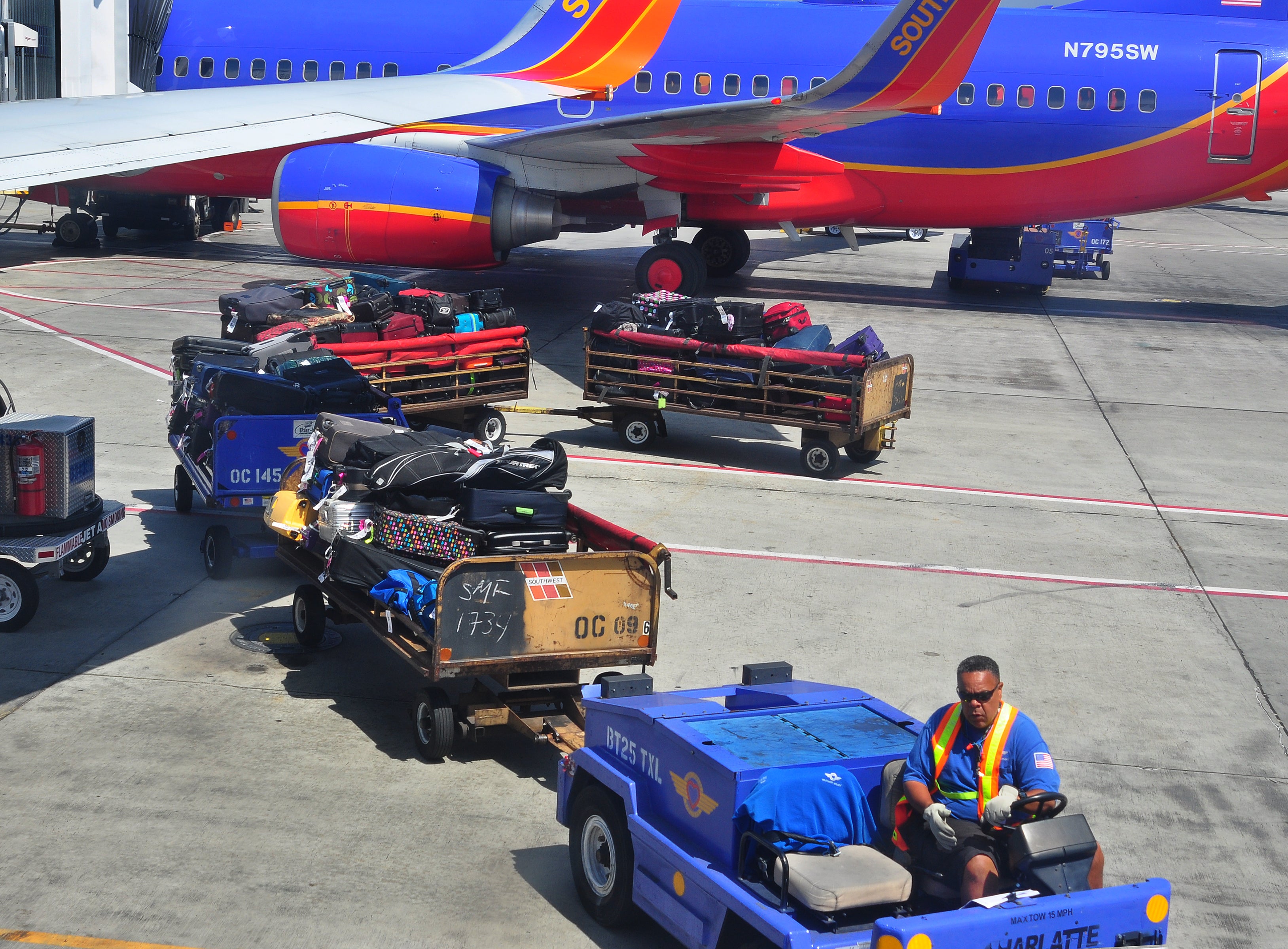 FAA Investigates Southwest for 'Significant Mistakes' Calculating Luggage Weight
This post contains references to products from one or more of our advertisers. We may receive compensation when you click on links to those products. Terms apply to the offers listed on this page. For an explanation of our Advertising Policy, visit this page.

The Federal Aviation Administration has spent the past year investigating Southwest Airlines for "widespread failures" to accurately track the weight of checked passenger luggage.

Government officials and internal FAA documents show a trail of "systemic and significant mistakes with employee calculations and luggage-loading practices," according to the Wall Street Journal. Between employee oversights or errors, Southwest's range of weight discrepancies range from a few dozen pounds to more than 1,000 pounds per flight above the pilot-reported takeoff weight, according to the federal agency, with some rare flights that clocked in at more than 2,000 pounds over the stated weight.

Airline pilots strategize takeoff speed and thrust based on the total aircraft weight. Under extreme circumstances such as engine failure during takeoff, those calculations can be thrown off by a number of variables including the weight distribution of passengers, checked and carry-on baggage, cargo hold content and fuel reserves.

With these considerations in mind, some FAA inspectors have expressed concern over the airline's inconsistent weight reporting. Some officials have publicly estimated that up to 33% of the airline's 4,000 daily flights may have operated with inaccurate weight reporting during certain periods, according to investigation documents reviewed by the Wall Street Journal.

However, Southwest strongly disagrees with the officials' statements. A spokesperson for the airline told TPG, "There is no current information to support the estimate that one-third of Southwest flights are dispatched with a weight and balance inaccuracy."

While many larger US carriers utilize computerized scanners to track passenger baggage by weight, Southwest doesn't do so. Rather, the Dallas-based carrier relies on its ground crew to manually count luggage as it is loaded onto Southwest's more than 700 Boeing 737 planes. However, all airlines utilize average bag weights to determine overall weight of checked baggage, regardless of the calculation method.

Documents from Southwest Airlines to the FAA stated that discrepancies of 1,500 pounds above reported takeoff weight should be considered within acceptable safety limits; in some correspondence, the airline stated that anything up to a 10,000-pound mistake would be considered a minor risk by the carrier's standards. But several current and former Boeing 737 captains have stated that they felt the larger weight discrepancy would be "dangerous" to rely upon for takeoff calculations, according to the Wall Street Journal.

The documents, submitted by Southwest to the FAA, repeatedly state that the "pattern of failures to comply" with standard reporting requirements fall "well within operating safety margins," with distracted baggage handlers and last-minute bag checks cited as one of the leading causes of of loading discrepancies, according to the Wall Street Journal.

Southwest also maintains that its baggage calculation system carries “less than minor risk” for passengers. And no Southwest accidents have been linked to any issues with planes that have reported weight discrepancies.

Southwest Airlines told TPG that the airline itself is the reason for the FAA inquiry. "As part of our FAA-approved Safety Management System, Southwest identifies and voluntarily reports safety-related topics to the FAA to improve our processes and procedures," a Southwest spokesperson said.

The spokesperson also said that there is "no enforcement action against Southwest Airlines regarding our weight and balance program. There is an open Letter of Investigation (LOI) which is a common mechanism for the FAA to document and share safety interests or concerns with an airline. In this case, the LOI addresses an issue that Southwest voluntarily reported to the FAA last year."

Finally, Southwest said that it has implemented updated "controls and enhanced procedures," including computerized bag scanning technology on the tarmac, which will be standardized for all Southwest aircraft by the end of 2019, according to a Southwest spokesperson, noting to TPG that it is confident its various new procedures adequately resolve the reported issues. As a result, the airline has requested that the FAA close the investigation in light of “our efforts and responsiveness to your office.”

Meanwhile, FAA documents disagree that the airline self-reported its own weight calculation issues. According to a document reviewed by the Wall Street Journal, FAA inspectors said that the agency began investigating the situation partially based on "separate allegations lodged by a whistleblower and received on an agency hotline for safety complaints."

A spokesperson for the FAA told the Wall Street Journal that “the FAA will not close its investigation until it is satisfied that Southwest’s corrective actions are consistent and sustained."

But the airline spokesperson told TPG that it plans to "continue our stringent monitoring of operating systems and procedures and always voluntarily report things that we believe can be improved to enhanced aviation safety."

TPG reached out to the FAA for comment but did not heard back at the time of publication due to Monday's federal holiday.