Engine Co. Had Doubts About Fan Blades on Fatal Flight 1380 for Decades 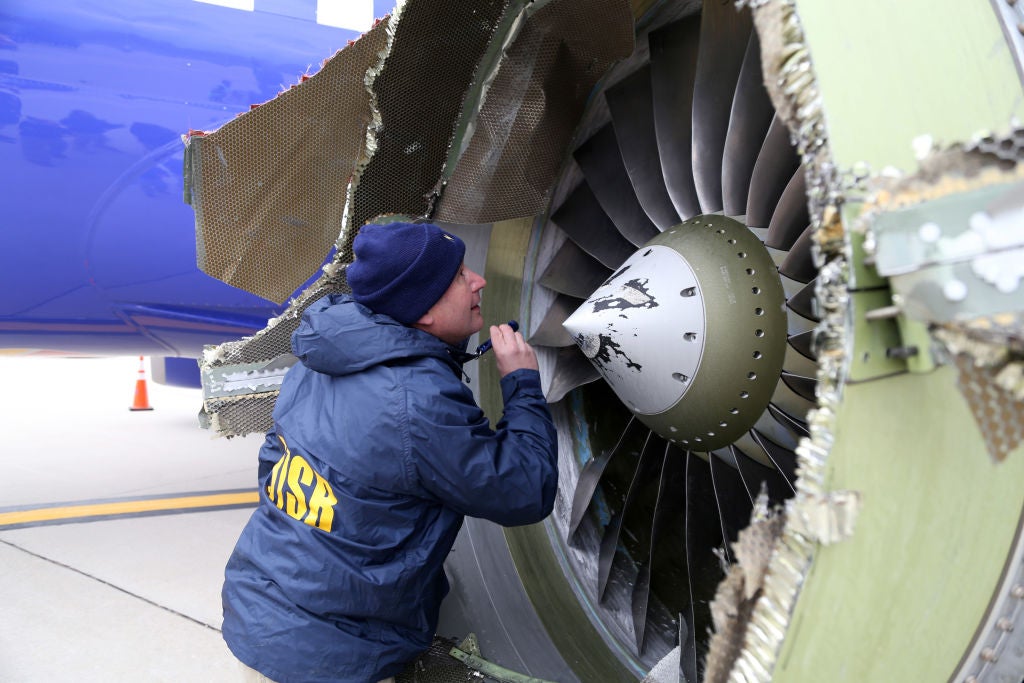 Engine Co. Had Doubts About Fan Blades on Fatal Flight 1380 for Decades

Manufacturers of the engine fan blade that snapped off a Southwest plane in April and killed one passenger told investigators on Wednesday that the engine's safety had concerned them from the inception of its design.

In a hearing of the National Transportation Safety Board, executives from the engine manufacturer, CFM International, said the engine has undergone various design changes throughout the years in order to prevent the fan blades from snapping off the engine, as was the case on Southwest flight 1380.

That fatal flight, which took place on April 17, saw the fan blade on one of the CFM engines break off due to metal fatigue, officials said in their preliminary investigations. The broken fan blade then caused the engine to explode, sending shrapnel crashing through a passenger's window and causing a cabin depressurization. One passenger, Jennifer Riordan, was nearly sucked out of the plane and later died from her injuries.

Engine Problems From the Start

CFM representatives told federal regulators at the NTSB hearing that the engine involved in the incident, its CFM56-7B model, failed its first certification test in the 1990s, CNN reports.

The engine passed the second test and was certified. But that was the beginning of a litany of design changes to keep the engines from creating safety issues for flyers. Shortly after the engines were put into service on commercial airlines, there were serious maintenance issues.

"Some of those early engines, when we looked at the fan blades, it indicated the coating system was not staying intact as well as we had anticipated with the design change," the engineering lead for the CFM56, Mark Habedank, told regulators in the hearing.

So, the manufacturers decided to add an extra piece, called a shim, and add more lubrication.

Then, in 2016, the engine on Southwest flight 3472 from New Orleans to Orlando had a fan blade crack and snap off, causing an engine failure similar to the one on flight 1380. Debris from the engine in that incident caused a hole nearly a foot and a half long and 5 inches wide in the plane's fuselage and forced an emergency landing at Pensacola's airport, but no shrapnel went through the window and there was no loss of cabin pressure as on flight 1380.

After the 2016 engine incident, CFM told airlines operating the engine in question to perform additional inspections of its fan blades for cracks or signs of fatigue, CNN says.

GE Aviation, one of the parent companies of CFM, told CNN that after the 2016 engine failure, CFM "responded aggressively" and inspected 350,000 fan blades along with regulators.

By the time of ill-fated flight 1380 in April, Southwest says it had already inspected 603 engines on its fleet of 737s. The airline found that the specific fan blade on flight 1380 did not meet the guidelines for additional testing when the engine underwent inspection.

"We had no basis to prioritize these fan blades versus any other blades in our fleet," Mark Wibben, an engineering manager at the airline, said at the hearing on Wednesday.

"We appreciate the work of the NTSB and all of the parties contributing to the investigation," Southwest told TPG in an emailed statement. "We all have the same goals: to share facts and learn what happened so this type of event never happens again. Southwest will continue lending its full support to the investigation."

According to the NTSB, the engine that failed in April on flight 1380 was manufactured in 1997 and overhauled in 2012. It last had maintenance work done in June 2017.

The family of Jennifer Riordan, the passenger who died on the April flight, thanked the NTSB for its "important work." Their statement read: "The most important thing now is making sure that the aircraft and engine failures that caused Jennifer's untimely and unnecessary death never happen again."

*This post has been updated to include Southwest's statement to TPG.