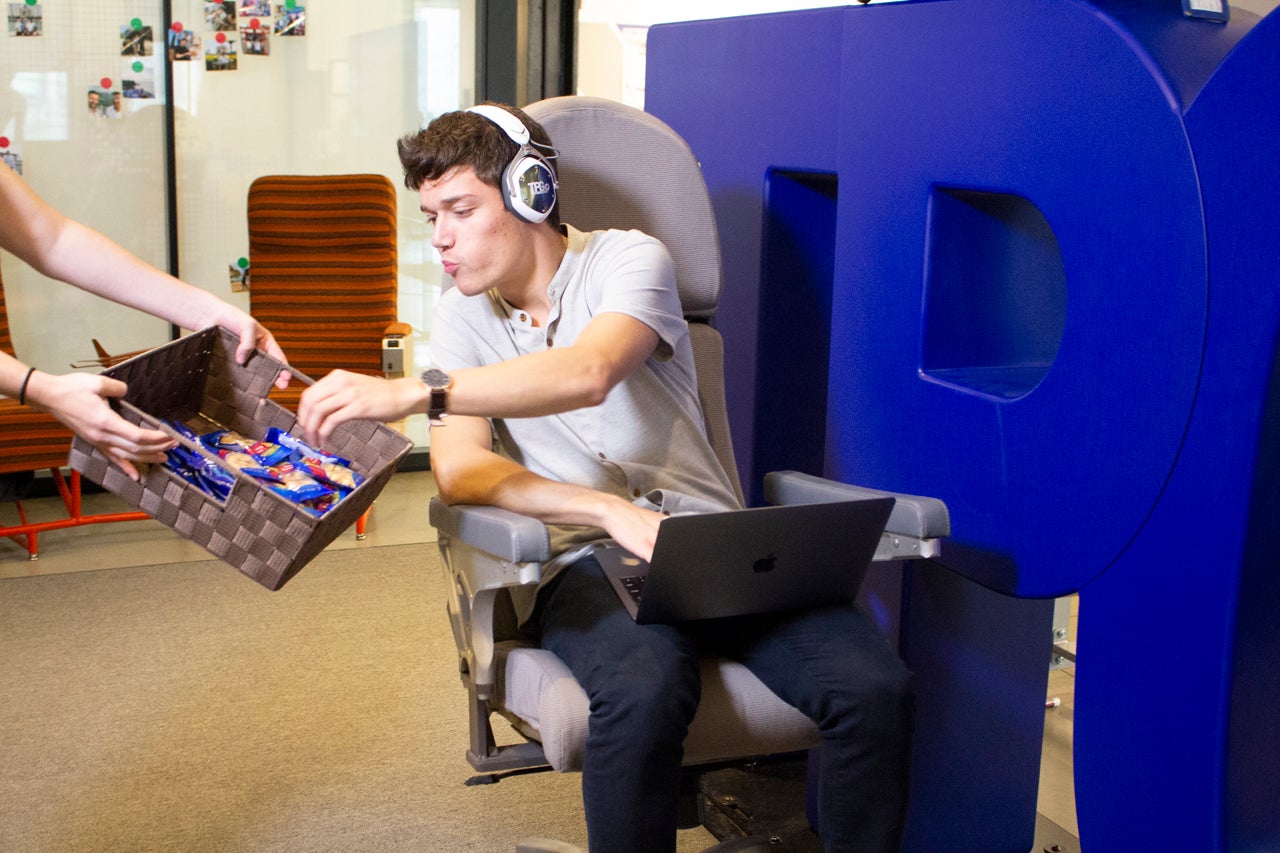 We Got a Sneak Peek at the Flight Simulator Where You Spend 6 Hours in Economy
This post contains references to products from one or more of our advertisers. We may receive compensation when you click on links to those products. Terms apply to the offers listed on this page. For an explanation of our Advertising Policy, visit this page.

There are plenty of flight-simulator video games where you emulate the excitement of piloting an aircraft from the cockpit, but what if you're a gamer who wants to relive the mind-numbing boredom of spending nearly six hours in coach?

Fret not: There's a video game in the works that will let you pretend to be an economy passenger for the full length of a flight from New York-JFK to Reykjavik, Iceland.

"I thought it'd be interesting if I tried making a game where you're just a passenger that shows the mundane aspect to air travel," Brooklyn-based game developer Hosni Auji said during a recent visit to the TPG offices. ""I thought, 'No one's going to expect to go into a video game where nothing happens.'"

Well, not quite nothing. When you play, you get to do almost everything a passenger in the economy cabin of a transatlantic flight does, like looking out the window and looking at the terrain below (courtesy of Google Earth), adjusting the shade, reclining the seat, unfolding the tray table, flipping the reading light on or off, and doing sudoku and crosswords in the inflight magazine. You can even read a full-length novel or turn on the inflight entertainment and play blackjack, check out the plane's progress on the flight map, or watch actual movies (though the cinema selection is limited to the public domain).

By the time the game is ready for release, Auji said, it'll have all those features — already in the current build — but also include the ability to listen to music on your in-game phone, call a flight attendant, pick your meal, spend in-game money on a tiered selection of crappy Wi-Fi, and do a little duty-free shopping. You'll even be able to sign up for a fictional mileage program, racking up points you can use to make simulated purchases or unlock new content, like a potential upgrade to business class. You probably won't be able to go to the bathroom, though.

But there's that one question Auji always gets when he explains his project to people: Why?

Naturally, there's the quirky delight of it all — like we said, he's a Brooklynite — but for Auji, a game about the prosaicness of air travel started out as a way for him to confront the years he spent afraid of flying.

"There's this dream of flying and then what people actually do when they're flying, and it's a disconnect," he said. "Flying is a parody of itself, the complete opposite of the freedom and exhilaration of soaring above the clouds. You're strapped in, it's uncomfortable and claustrophobic, and you're trying to distract yourself. It got pretty serious at one point, and I would try to avoid flying, but I was in a situation where it was unavoidable. I hated it, so I would seek comfort by going on Google and reading stuff, needing to rationalize that there was nothing to be afraid of."

After a while, he was hooked on all things involving commercial aviation: His hatred of flying, ironically, had led to him becoming an AvGeek.

It had also created the germ of the idea that would become his game. He'd originally wanted a brutally accurate reminder of how safe 10,999,999 flights out of 11 million are. Now he wanted to share those reassurances with other people who suffered from flight anxiety.

So a year ago, he decided to create the economy-passenger simulator for his thesis as a graduate student in the video game development program at New York University, with an eye toward it being used by people who wanted to alleviate their aviophobia.

"When I started putting in the details, I decided to maybe not force the anxiety, and let it happen naturally," he said.

To his surprise, many of the early playtesters found the experience relaxing.

"A former flight attendant said it was soothing how it was all coming back to her — especially the sounds," Auji said.

(Currently, those sounds include announcements from the cabin, the occasional baby crying, random noises from other passengers and the ambient hum of an airplane cabin.)

But even as pure entertainment, Auji's flight simulator will hew to his original demand for honesty. Random events, adhering to real-world statistics, will hamper journeys, including broken tray tables, buggy IFE systems, especially chatty kids and even sudden cabin depressurization or the extremely rare plane crash.

"The plane can crash maybe one in 10 million times, but that's a distinct possibility, even if no one ever actually sees it except in the code," Auji said. "I think that speaks volumes to the kind of game I want to make: There's a little tongue in cheek, and elements are a joke game, but I'm taking this very seriously. It's about the hyperdetails."

Fellow aviation nerds, he promised, will appreciate the true-to-life cabin (currently based on an Airbus A380 but in the process of being changed to an A320), the de rigueur message from the CEO in the inflight magazine, and the revamped thrum of the engines.

"One of the first comments when I first put the gameplay on YouTube was asking why I used a GE90 engine on an A320," Auji said. "That's when I knew I was gathering interest from the community but also that I needed to up my game and that it needed to stand up to their scrutiny. I always have them in the back of my mind when I make a change to the game now."

It's also led him to the AvGeekiest of dilemmas: Auji's design background convinced him to make it so that, when the player looks out the window of his or her seat on the starboard of the plane, he sees red light on the wingtip, as it just looks better. (It's supposed to be a green light on the starboard side. The red light goes on the port wingtip.) But his inner AvGeek is still crying foul.

"I might just change the seat to the other side of the plane," he said.

Auji hopes to get an agreement with a major game publisher and launch the game in September 2019. He also hopes that the simulator might prove useful in the way he originally intended, as an aid for people who are afraid to fly, like he even now still occasionally is.

"Maybe exposure therapy? But it's not my field," he said. "A psychiatrist did reach out to me about the possibility, and this is an area, on a personal level, that I'd like to explore."

But whether or not it gets used that way, and whether or not anyone ever plays through the entire five-hour, 45-minute flight from JFK to Keflavik Airport (KEF), Auji promised that it's going to be a lot more fun than you probably expect.

TPG's Wallace Cotton got to try out the game's current build recently. Watch this video to see him test it out.