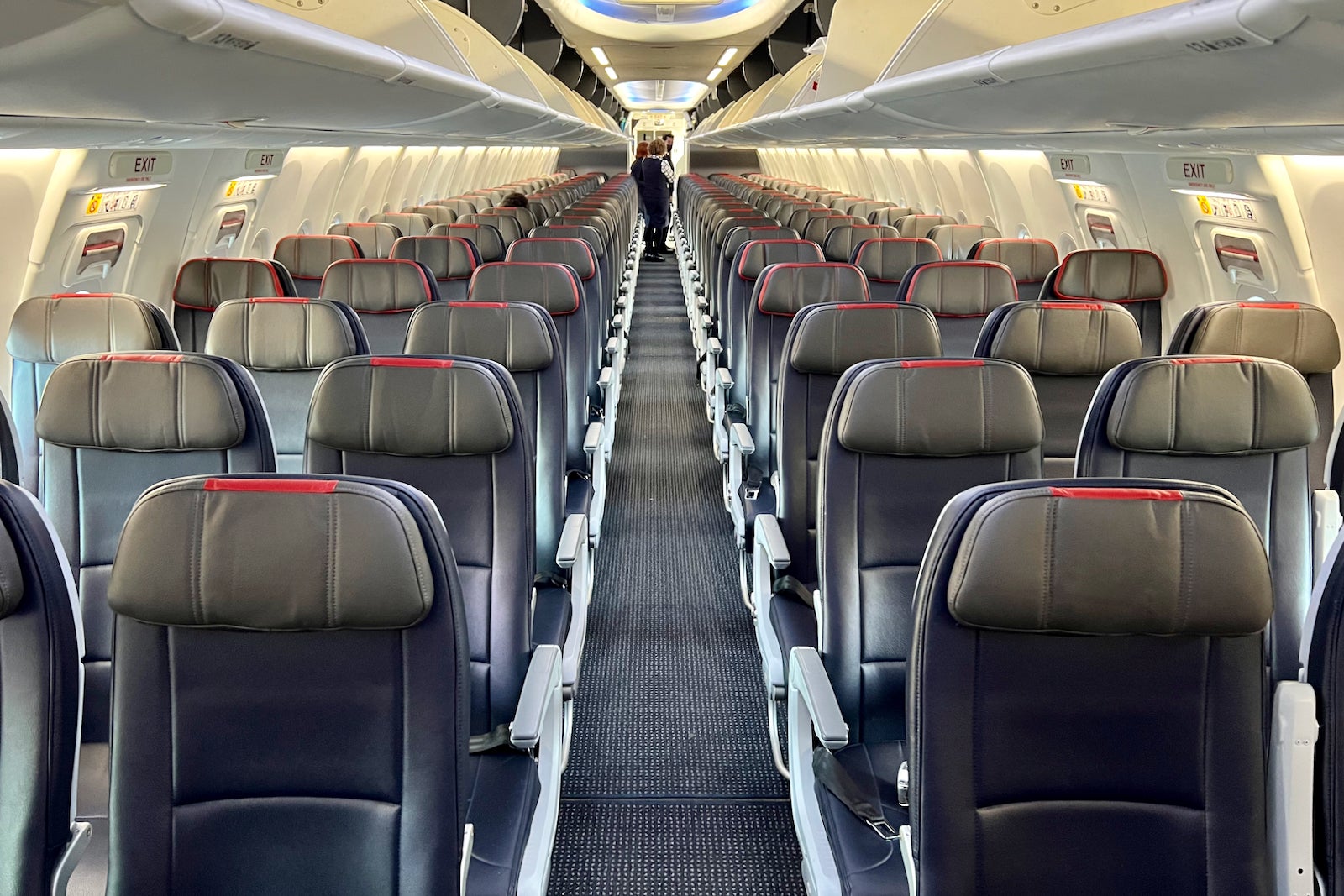 Elite qualifying dollars, points and miles are out for American Airlines AAdvantage loyalists.

Now, Loyalty Points are the sole metric to consider on your quest for American Airlines elite status. Of course, if you also want to earn Loyalty Choice Rewards, you'll also need at least 30 qualifying segments per year.

Earlier this year, I wrote about why I hadn't made a requalification plan for American Airlines elite status yet. I've held Executive Platinum status since 2016, and I'm not quite ready to switch to a different Oneworld loyalty program.

So, I've started planning how to earn American Airlines status in 2022 with Loyalty Points. Admittedly, I'm not sure how the next 12 months will go -- so although I'm striving for Executive Platinum status, I might stop at Platinum Pro.

Here are my current plans for requalification.

Flights are just one part of my requalification plan. So far this year, I've credited the following flights to American Airlines AAdvantage:

As you can see from the premium economy ticket to Bogota, special fares can still be valuable under the Loyalty Points scheme when you snag inexpensive fares. I expect to book several inexpensive special fares to Asia, Europe or South America in the upcoming months, as I have expiring systemwide upgrades that I'd like to attach to these fares.

And, as a British Airways flight I have booked to Bangalore, India, in April shows, premium cabin partner fares can also be valuable. For this $949 round-trip premium economy fare from Los Angeles (LAX) to Bangalore (BLR) via London-Heathrow (LHR), I should earn around 46,022 miles and Loyalty Points based on American's partner-earning charts since the round-trip flight distance is 20,919 miles and the fare class is E or T.

But, I'll likely need to book and fly more partner fares in premium cabins if I want to requalify for Executive Platinum status.

I rarely used the AAdvantage shopping portal until this year. After all, I usually check a shopping portal aggregator before making online purchases. And other popular online shopping portals, like Rakuten and TopCashback, usually provide a better return on my spending.

Related: Why I'm focusing on the American Airlines shopping portal this year

The SimplyMiles program lets you earn bonus American Airlines miles when using a Mastercard credit card at participating merchants. You must enroll in an offer on your account before making a purchase, but you aren't limited to AAdvantage-cobranded Mastercards.

Currently, I have 91 offers available on my SimplyMiles account — but frankly, I'm not interested in most of them.

That said, they can sometimes come in handy. Earlier this year, I earned 1,000 miles on a Winc wine purchase. And I used a SimplyMiles offer last weekend that let me earn 465 miles on a $20 gas purchase through the BP app.

I don't expect to earn more than a few thousand Loyalty Point-eligible miles through SimplyMiles each year. Even so, I check the site every few days for new offers. After all, I might find an offer (like the recent BP one) for a product or service I would have purchased even without the offer.

Last year, I earned World of Hyatt Globalist status for the first time, so I can benefit from my new elite benefits and the partnership between Hyatt and American Airlines.

The main benefit of the partnership for me is earning World of Hyatt points on American Airlines flights in addition to my normal AAdvantage earnings.

I also earn American miles on Hyatt stays (in addition to my normal Hyatt earnings). In particular, I earn 1 AAdvantage base mile per eligible dollar spent on qualifying Hyatt stays and experiences. And these base miles are Loyalty Point-eligible.

So far this year, I've earned 919 AAdvantage base miles on 13 Hyatt nights. As such, I don't expect to earn more than a few thousand Loyalty Points each year through American's dual accrual partnership with Hyatt.

Related: How Hyatt and American loyalists can earn more rewards by linking accounts

For a story on earning American Airlines miles for hotel stays, I opted to earn American Airlines miles instead of IHG Rewards points on a stay in Johannesburg. On the $88 stay, I only earned 153 base miles (whereas if I'd credited my stay to IHG, I would have earned at least 1,524 IHG points). So, I plan to continue earning hotel points when booking directly with hotels.

Of course, I sometimes stay at non-branded hotels too. I usually book through Hotels.com Rewards for these stays. Now I'll at least check Rocketmiles and American Airlines Hotels to see if I can find a compelling property that provides a good value when I don't want to book directly with a brand. After all, both programs sometimes offer large base-mile bonuses that are Loyalty Points-eligible.

You can take online surveys and earn American Airlines miles. I earned 250 bonus miles after my first survey, but I've earned 471 base miles on subsequent surveys. The surveys usually don't provide a good return on investment for the time spent. But, if you're laying in bed or waiting in a long line, completing a survey or two could be a good way to pass the time.

Note that you get a partial reward if you start a survey but aren't selected to complete the survey. So, you'll get a lot of small rewards for starting surveys and only a few full rewards for completing surveys. I don't expect to earn more than one or two thousand Loyalty Points through surveys, as you can't access them in many international destinations and the return for the time spent is relatively low.

Related: 10 ways you could be earning airline miles other than credit cards

American Airlines recently announced plans to retire its 500-mile upgrade certificates. I've accumulated many of these over the years, as I've only rarely flown with companions who could use these certificates.

But, besides the bonus, my primary reason for getting the Aviator Red is to eventually upgrade it to the AAdvantage Aviator Silver World Elite Mastercard. After all, you can earn an additional 5,000 Loyalty Points when you spend $20,000, $40,000 and $50,000 on purchases with the Aviator Silver during your status qualification period.

Even with Loyalty Points on the table, it's still difficult to justify using the MileUp Card and Aviator Red. I'd rather use my husband's American Express® Gold Card on groceries, my Ink Business Preferred Credit Card on flights and my Capital One Venture Rewards Credit Card on general spending. If it doesn't look like I'm going to hit my elite status goals, I'll make the MileUp Card my grocery and everyday spending card.

I suspect that I'll only accrue around 10,000 Loyalty Points through activities outside of flights, 500-mile certificate conversions and credit card spending. My husband is also looking to requalify for a high level of American Airlines status, so we'll have to alternate who earns on activities like Rocketmiles and shopping portals.

I see credit card spending as a fallback to reaching my desired status. After all, I can switch all of my spending to my American Airlines cards if I need more Loyalty Points. Regardless, I expect I'll get most of my Loyalty Points from inexpensive special fares and partner fares in premium cabins.

Related stories
United credit card holders: Earn bonus miles with the Mile Badge Game promotion
Register now: Choose how you earn bonus points with IHG One Rewards’ new promotion
Is the Marriott Bonvoy Brilliant Amex worth the $650 annual fee?
The best ways to travel to Japan with points and miles
Featured image by (Photo by Zach Griff/The Points Guy)
Editorial disclaimer: Opinions expressed here are the author’s alone, not those of any bank, credit card issuer, airline or hotel chain, and have not been reviewed, approved or otherwise endorsed by any of these entities.