Articles
David Slotnick is a senior aviation business reporter at TPG. He covers anything and everything to do with the business of running an airline.
Follow
June 12, 2021
•
7 min read 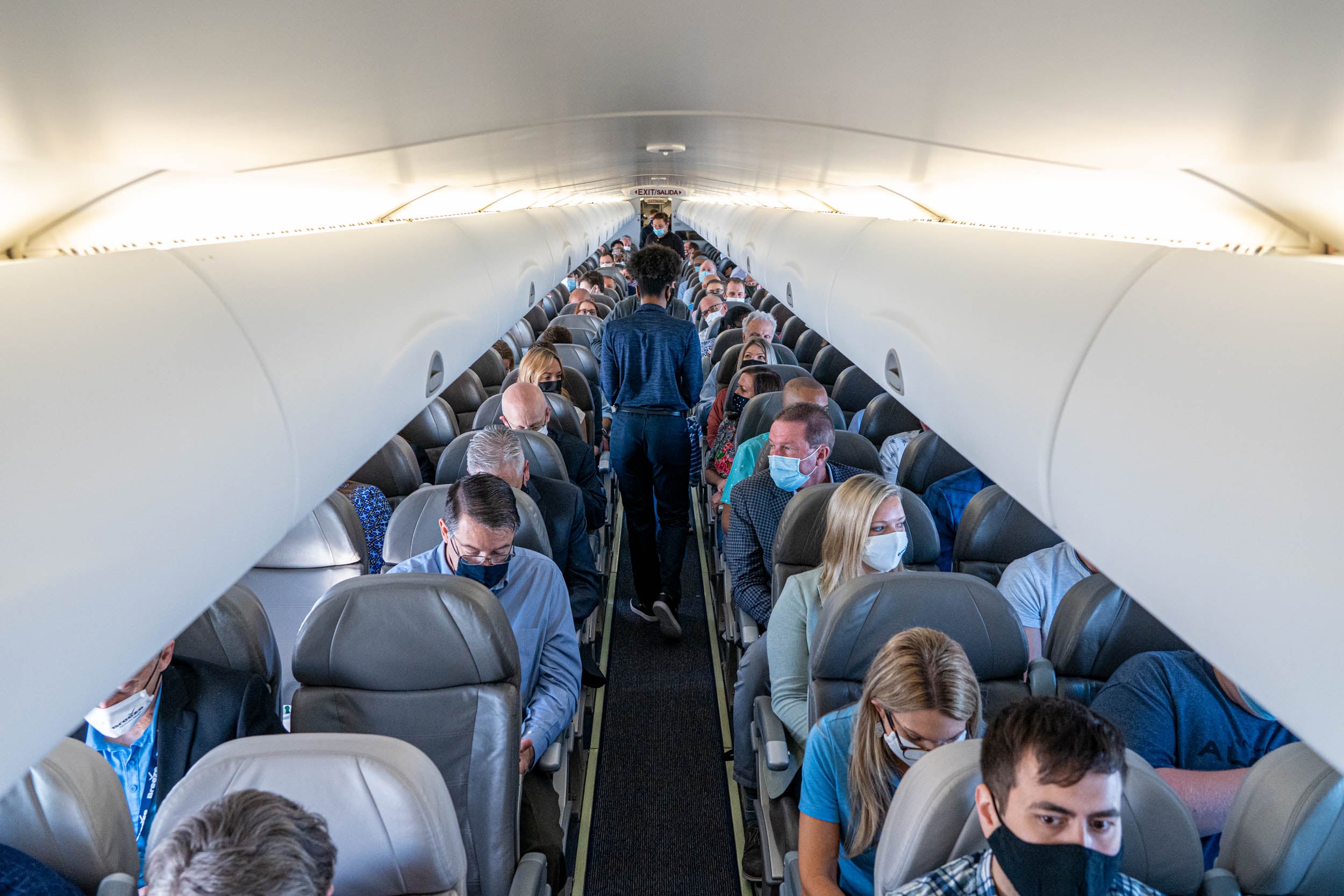 My only pre-vaccination pandemic flight came in early December 2020, when I decided to risk traveling to report a story in person. I wore an N95 covered by a surgical mask, and even a face shield while onboard the plane. When I got home, I quarantined — even from my wife within our home, until I got a negative test five days later.

It's amazing how much things change in just a few months.

My next flight came at the end of March 2021, a few weeks after I joined TPG. I was fully vaccinated at that point — I also work part-time as an EMT and was consequently towards the top of my state's vaccine list — but still kept the N95.

Since then, I've flown at least a few times each month, both for work and for vacation.

I'm far from alone in my return to the skies. Air travel demand has soared in recent months, with domestic and short-haul international demand at or above 2019 levels, according to airline executives. Notably, some of that demand has come from business travelers, who have begun returning to the road sooner than even the most optimistic industry analysts expected.

My last few months of flying have been a delight, a wonderful return to something almost like normalcy. Masks are still required, on-board service isn't quite the same yet, but the ability to hop from city to city, state to state, after a year barely able to visit family indoors has been a treat.

People are back in the air, but things aren't quite the same as before. Here are five things I've noticed since I started flying regularly again.

1. People are happy to be back

Things have been contentious in the air in recent months, with a number of high-profile disturbances, and airlines and federal agencies confirming a massive increase in unruly passenger incidents.

That's the opposite of what I've seen.

While those incidents are irrefutably on the rise, the bad actors are in the overwhelming minority.

Most people seem pleased to be back, and there's a vague air of camaraderie that didn't exist before. It's subtle, but nonetheless positive.

For a lot of people, it's their first flight since before the pandemic began. It's their first visit to family, vacation, in-person semester, or something else. Even dealing with long security lines, delays, full overhead bins, and middle seat assignments doesn't change the fact that most of us feel lucky to be back out there.

Notably: The vast majority of people seem to be adhering to mask requirements, despite reports of continuing tension over face coverings.

Before the pandemic, when I was flying fairly often, I hardly had to think of what to pack. I instinctively brought all the right chargers with me and could set up my seatback pocket — headphones, tablet, charger, more — while on autopilot, stowing my carry-ons.

On my first trip back, I forgot my backup battery for my phone. I left my AirPods in my bag in the overhead bin and had to ask my neighbor to let me out of my seat. On another flight a few weeks later, I put my laptop in the wrong place without thinking about it, causing a big scratch on the back of it.

I've also seen business travelers forgetting that they can't use their laptops during taxiing, or that on some planes, they need to wait until 10,000 feet before plugging their phones into chargers — all things which flight attendants have had to remind people about.

It happens. And I'm sure it will go away soon. I've had a better go of it on my most recent flights, and feel more settled in again.

3. Gate lice are worse than ever

I'm honestly not sure what the cause is of this one. But people are crowding the boarding area ahead of their groups being called worse than ever.

It could be that people are anxious to have more time to settle in, given that they've fallen out of their normal travel routines. Or that people want to get into their window seats before anyone else is seated in their row, maybe as part of an effort to minimize contact with others.

Or maybe it's the fact that airlines have changed and revised their boarding procedures a few times during the pandemic to try and enable whatever social distancing is possible.

Whatever the reason, sometimes going to board a flight has felt like navigating a crowded mall the day before Christmas.

During the pandemic, most mainline carriers cut back on catering to try and minimize contact between passengers and crew — and to cut costs.

Many have since brought a degree of onboard service back, but it's not yet the same.

Delta is still serving snack boxes in first-class instead of proper meals. American makes main cabin passengers come up and ask for any drinks aside from water, rather than bringing a full drink cart around. United doesn't have substantial onboard food options — even for a fee — in coach, aside from small snack packages.

It seems clear that passengers are ready for catering to come back. I've heard numerous people during flights ask for a snack, sandwich, or drink that wasn't available.

Especially as people start flying for business again and don't necessarily have time to grab meals in the airport, having decent options onboard is important.

The empty middle seats and easy upgrades that people came to expect a few months ago are no more.

Every flight I've been on in recent months has been nearly full, with maybe just a couple of empty seats — in some cases, flights have even been oversold.

This is not necessarily a universal experience, and my travels have mostly been to popular leisure destinations, hubs, or Washington, D.C., which doesn't quite follow the same trends as most other markets.

Still, American Airlines said that its average load factor was up to 84% in May, and even higher on busy weekends. Delta declined to share exact numbers during a recent investor presentation but said that its load factor and increased 25% from March to June — the airline's decision to stop blocking middle seats as of May 1 certainly helped.

More: When will international travel return? A country-by-country guide to coronavirus recovery

As people begin traveling again, airlines are working hard to match capacity to demand to fly as efficiently as possible in order to maximize revenue. So don't count on an empty seat or guaranteed upgrade — these days, that's looking a lot less likely.

Related stories
What are points and miles worth? TPG’s December 2022 monthly valuations
Capital One Venture X to lose Priority Pass restaurants and spa services as of Jan. 1, 2023
December 2022
Current Hyatt promotions: Bonus points on stays and dining plus double stay credits
Featured image by Photo by David Slotnick/The Points Guy
Editorial disclaimer: Opinions expressed here are the author’s alone, not those of any bank, credit card issuer, airline or hotel chain, and have not been reviewed, approved or otherwise endorsed by any of these entities.