Tour the Aircraft AA is Flying to Casablanca, Tel Aviv and Other New Transatlantic Routes 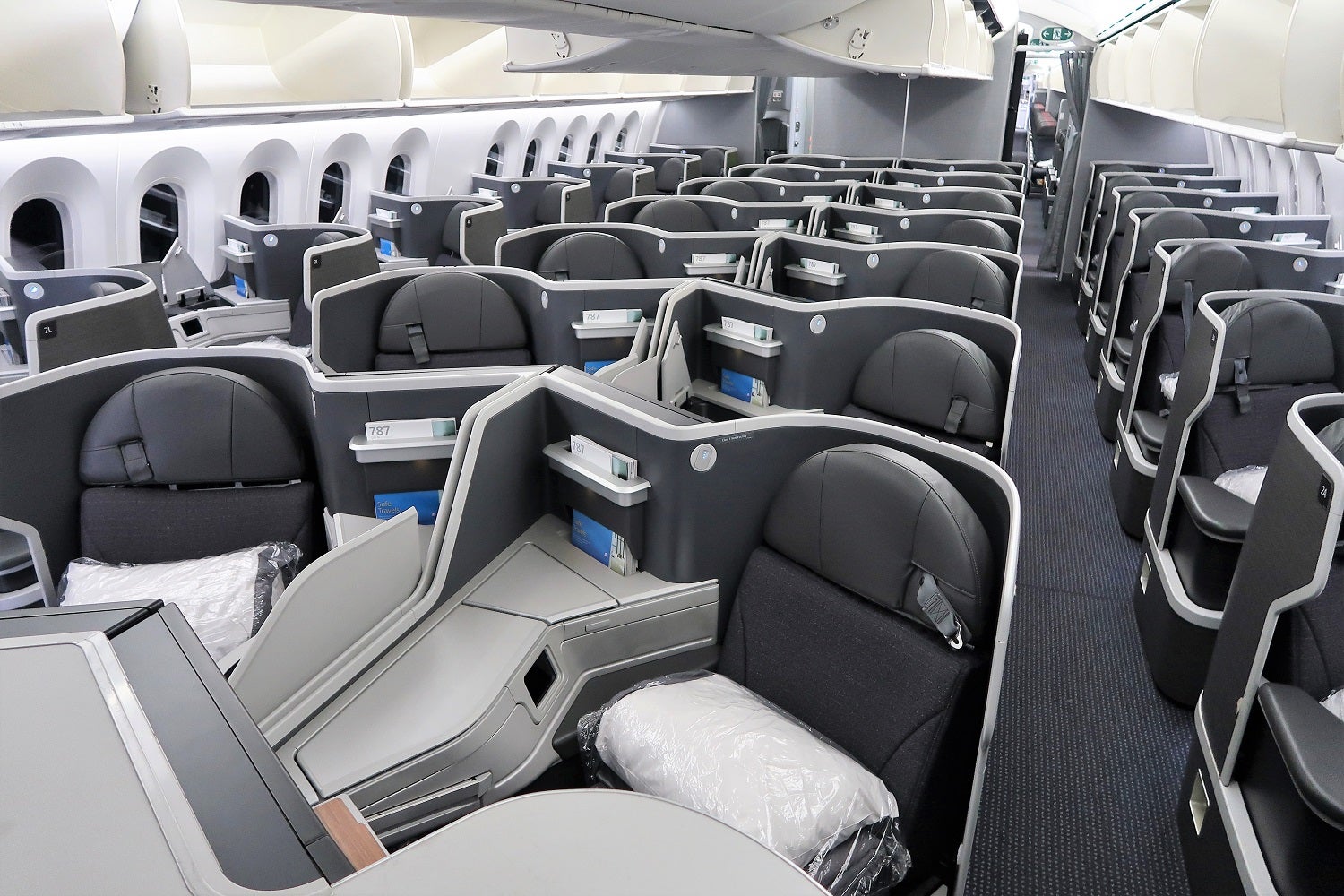 American Airlines announced five new transatlantic routes on Thursday, with the first of those starting in May 2020. If you're one of the travelers excited about these new routes, you might be curious what the experience is like on-board.

There are three different aircraft operating these routes. The interior and features are similar on two, but are very different on the third. Let's take a look inside and tell you what you need to know:

In May 2020, AA is launching new routes between Chicago O'Hare and three Central European destinations:

All three of these destinations are going to be served by American Airlines Boeing 787-8 aircraft. AA currently has 20 of these aircraft, but another 22 are coming thanks to its massive April 2018 order. All 22 of these aircraft are scheduled for delivery by the end of 2021 -- with 12 being added in 2020 and another 10 in 2021.

A recent retrofit stripped out 8 business class seats to add premium economy seats on all of the existing 20 Boeing 787-8 aircraft. That leaves these aircraft with 20 lie-flat business class seats arranged in an all-aisle-access 1-2-1 arrangement. The Zodiac Concept D seats alternate between facing forward and facing backwards.

These aren't the best business class seats in AA's fleet, having earned the reputation as "rocking chairs" due to the unstable mounting and way the seats are connected together. I've been woken numerous times while trying to sleep in these seats when my neighbor's movements have rocked my seat.

Thankfully, not all seats have this rocking issue. TPG's Kevin Song put together the following to show which seats are connected. Note: rows 6 and 7 were removed in a retrofit since this image was created. So, you'll want to stick to 1D, 1H, 5A or 5L if you want a restful night of sleep on the overnight flight.

Mercifully, American Airlines cancelled its contract with Zodiac after supply issues delayed delivery of these business-class seats. That leaves us in limbo about what the business class seats will be for the new order of 787-8 aircraft.

TPG asked an AA spokesperson about which business class seats would be used on the new 787-8 aircraft. However, AA isn't ready to make this announcement yet. It would be logical for American Airlines to install B/E Aerospace Super Diamond seats to match what it's been doing on its 787-9 aircraft.

The economy seats on American Airlines' Dreamliner seem to be designed for a much smaller-than-average person. While 3-3-3 arranged Dreamliner aircraft are known for their tight seat width, the armrests on AA's seats seem unnaturally low and legroom isn't spacious at just 31 inches of pitch.

The good news is that the armrests almost fully raise up. If your flight has a light enough load -- like a flight I recently took from Chicago to Beijing -- you might be able to make a short "poor man's business class" seat:

Each economy seat has a 9-inch in-flight entertainment screen with around 284 movies and 294 television episodes. There's a universal power outlet conveniently located under the IFE screen and a USB outlet built into the bottom of the IFE screen.

Starting Sept. 9, 2020, American Airlines is launching a 3x weekly route between Dallas/Fort Worth (DFW) and Tel Aviv (TLV) using a Boeing 787-9. After taking delivery of two aircraft this year, American Airlines has 22 of these aircraft and will maintain that fleet through the end of 2021.

The experience on the Boeing 787-9 in premium economy or economy is almost identical to what you'll find on the 787-8. However, the business class cabin is a notable improvement from the -8.

American Airlines' Boeing 787-9 has 30 business class seats in a 1-2-1 arrangement. There are seven full rows and an eighth row that has only window seats. All 30 seats have aisle access.

Instead of the half backward-facing Zodiac "rocking chairs," AA installed B/E Aerospace Super Diamond on its Boeing 787-9. These are arguably either the best or second-best business class seat in AA's fleet.

These seats aren't perfect though. The tray table folds in under the inflight entertainment screen and reduces the height of the foot well. That makes it hard for some that want to sleep on their side to fit comfortably. Also, AA opted not to pay for the movable privacy divider between the middle seats, so solo travelers might want to opt for the window. I'd recommend skipping the window seats in row 6 as they're missing a window.

Each seat has a large 18-inch diagonal inflight entertainment screen with hundreds of entertainment options. And the shaping of the seats provides a nice feeling of privacy when you're sitting down.

American Airlines debuted its premium economy product on its Boeing 787-9 in October 2016 before expanding the product to other widebody aircraft. Like the -8, the -9 is arranged in 2-3-2 seating, but there are only three rows (21 seats) on the -9 instead of the four rows (28 seats) on the smaller -8.

As with the 787-8, the AA Dreamliner economy seats seem designed for a smaller person -- between 17-inch wide seats and awkwardly short armrests. Economy on the 787-9 is split into two sections of seats. The front cabin begins with three rows of extra-legroom seating featuring 35 inches of pitch.

There are 198 standard economy seats with just 31 inches of pitch. That's going to feel pretty tight for the nearly 7,000-mile long flight between DFW and Tel Aviv.

At least there's an in-flight entertainment screen at each seat with a universal power outlet and a USB power outlet.

From June 4 to Sept. 8, 2020, American Airlines is operating 3x weekly service between its transatlantic hub in Philadelphia and its first-ever destination in Africa: Casablanca, Morocco (CMN).

That's the good news. The bad news is the aircraft it's operating on the 3,700-mile flight is one of its oldest and worst-retrofit in the fleet: AA's Boeing 757-200.

There are no built-in in-flight entertainment screens in either economy or business class. Most economy seats don't have power outlets. And business-class passengers have the option to straddle or be straddled.

Starting in September 2016, American Airlines begin installing lie-flat seats on 24 of its Boeing 757 designated for transatlantic operations. The other 10 of AA Boeing 757s have standard recliner seats and are commonly used on domestic routes. While AA hasn't confirmed which aircraft arrangement will be used on the Casablanca route, we can be pretty sure that the route will use aircraft with lie-flat seating.

These aircraft have B/E Aerospace Diamond business class seats installed in four rows of 2-2 arrangement. While the name is similar, don't confuse these seats with the B/E Aerospace Super Diamond. Instead of offering all-aisle-access, the window seats don't have direct access to the aisle. When the passenger in the aisle seat is lying flat, this can make it very awkward to get out of the seat, earning these seats the reputation of "to straddle or to be straddled."

Instead of having built-in in-flight entertainment screens, AA's Boeing 757s are provisioned Samsung Galaxy Tab 4 tablets for business class passengers. These small screens must be mounted inside a space that's clearly designed for a much larger screen.

The problem with those tablets are many. Due to limited storage space, there are only 94 movies loaded onto the tablets compared with 284 movies on the built-in systems. Also, to prevent theft, American Airlines usually waits until after takeoff to hand out the tablets and always collects them well before landing. That can reduce the time you have with an IFE screen by up to two hours compared with the built-in displays -- leading to complaints:

AA has standard 3-3 seating in economy -- making this aircraft similar to what you'll find on domestic flights rather than on most international aircraft. But, that's not necessarily a bad thing. Instead it's AA's retrofit of this aircraft that leaves it far from desirable.

There's no in-flight entertainment screen in seat-backs. Passengers will either have to rely on overhead screens or they'll have to stream to their own device.

Complicating matters is the lack of power outlets. While rows 9-18 have universal power outlets between seats (two outlets per row), the Main Cabin seats generally only have power in one of every 3-4 rows. So, you're not only going to need to bring your own device, but you'll also have to bring your own power. That doesn't bode well for a long transatlantic flight.