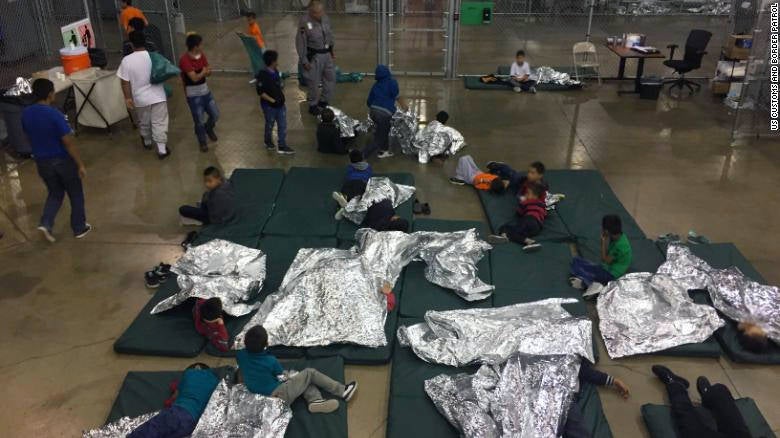 American, United, Frontier, Southwest and Alaska airlines said Wednesday that they were taking a stand against the Trump administration policy of separating immigrant children from their parents, but the Department of Homeland Security accused the carriers of "buckling" to the mainstream media — though President Donald Trump reversed the policy only hours later.

AA, United and Alaska formally asked the federal government not to use their flights to transport immigrant children separated from their parents, while Frontier said it would not willingly do so.

“The family-separation process that has been widely publicized is not at all aligned with the values of American Airlines — we bring families together, not apart," AA said in a statement.

"We have therefore requested the federal government to immediately refrain from using American for the purpose of transporting children who have been separated from their families due to the current immigration policy. We have no desire to be associated with separating families, or worse, to profit from it. We have every expectation the government will comply with our request, and we thank them for doing so.”

The airline, like other domestic airlines, often flies passengers for the federal government through a lowest-fare system, and the airlines involved have no control over who the government puts on its planes.

“Based on our serious concerns about this policy and how it’s in deep conflict with our company’s values, we have contacted federal officials to inform them that they should not transport immigrant children on United aircraft who have been separated from their parents,” the United statement read. “Our company’s shared purpose is to connect people and unite the world. This policy and its impact on thousands of children is in deep conflict with that mission and we want no part of it.”

The airline added that it had checked its records and didn't believe it had been used by the government to transport any of the detained children.

On Facebook, Frontier said it was also refusing to take part, at least knowingly, in the policy, though it didn't mention whether it had contacted the government.

"Frontier prides itself on being a family airline, and we will not knowingly allow our flights to be used to transport migrant children away from their families," the statement, posted in the early afternoon Wednesday, said. "At this time, we are not aware if Frontier has been used for this purpose."

Southwest Airlines joined the group later Wednesday in saying it didn't want to transport separated immigrant children, and Alaska said it had already reached out to the federal government.

"At Alaska Airlines, our values guide us to do the right thing," Alaska spokesman Ray Lane said in an email. "Alaska Airlines does not support the recent immigration policy that separated immigrant children from their families. To our knowledge, we haven’t transported any immigrant children who have been separated from their families, and today informed the government that we do not want to do so."

The president of the Association of Flight Attendants-CWA, the world's largest labor union for flight attendants, said many of its members felt the policy was "deeply immoral" and were struggling with the possibility they might have to work on a flight carrying immigrant children separated from their families.

"Flight attendants have experience ushering migrant children to families or even to deportation from the country," international president Sara Nelson said. "The difference today is the overwhelming American opposition to a new immigration policy that separates families. This national discussion and response is being felt on the planes and discussed among crews.

"AFA condemns any action to purposefully separate children from their parents."

Shortly after Frontier's announcement but before President Trump signed an executive order reversing his administration's policy, Department of Homeland Security press secretary Tyler Houlton said the airlines were contributing to crime and illegal immigration with their decision.

"It's unfortunate that American, United and Frontier Airlines no longer want to partner with the brave men and women of DHS to protect the traveling public, combat human trafficking and to swiftly reunite unaccompanied illegal immigrant children with their families," Houlton said on his DHS Twitter account. "Despite being provided facts on this issue, these airlines clearly do not understand our immigration laws and the long-standing devastating loopholes that have caused the crisis at our southern border. Buckling to a false media narrative only exacerbates the problems at our border and puts more children at risk from traffickers. We wish the airlines would instead choose to be part of the solution."

Delta Airlines, the other large legacy US airline, didn't comment on the policy or the other airlines' announcements until after Trump nixed his administration's previous directive.

“Delta’s mission is to connect people, and we are against anything that runs contrary to that mission. Recent reports of families being separated are disheartening and do not align with Delta’s core values," the carrier said on its website. "We applaud the administration’s executive order resolving the issue of separating children from their families at the US border.”

AA's announcement came as it faced criticism when a flight attendant claimed to have seen 16 immigrant children "dressed as criminals" being transported from Arizona to Miami on a plane last week.

"Sixteen. All dressed in black and gray cheap Walmart sweat suits, quietly boarding the 12:30am flight. Children! Thirty-two scared eyes looking straight forward dazed. We try to speak, yet none speak English. During the beverage service, one of the crew comes to me in tears. They can't face these children that have been ripped from their families with a smile."

The story was repeated on Facebook and quickly went viral over the weekend. News outlets determined that it most likely took place on an AA plane. A spokeswoman for the AFA later said that the union had confirmed that the Facebook post wasn't doctored and came from a real flight attendant, though no one's been able to verify all of the details. An aviation official familiar with the incident said that there had been a flight matching the general description of the one described in the viral account, but that it involved 13 children, with the youngest 13 years old.

AA spokesman Ross Feinstein said that the company had checked its records and found no flight corresponding to the account's specific details.

"American, like many US airlines, provides travel to the federal government through contracts; however, the government does not disclose information about the nature of the flights it takes or the passengers who are traveling," the company statement read. "While we have carried refugees for nonprofits and the government, many of whom are being reunited with family or friends, we have no knowledge that the federal government has used American to transport children who have been separated from their parents due to the recent immigration policy, but we would be extremely disappointed to learn that is the case."

Nearly 2,400 children who crossed illegally into the US in May and June have been separated from their parents or guardians, a part of the new Trump administration "zero tolerance" immigration policy that Attorney General Jeff Sessions made public on May 7. Many of them, including infants, have been placed in detention camps around the country.

On Wednesday afternoon, amid an overwhelming backlash, the president signed an executive order reversing his administration's previous directive about separating migrant children from their parents. Children and parents will now be detained together under the newest order, though Trump vowed to continue to "have zero tolerance for people that enter our country illegally."

Featured image by A photo provided by U.S. Customs and Border Protection shows the interior of a CBP facility in McAllen, Texas, on Sunday. Immigration officials have separated thousands of families who crossed the border illegally. Reporters taken on a tour of the facility were not allowed by agents to interview any of the detainees or take photos, the AP reported. U.S. Customs and Border Protection's Rio Grande Valley Sector via AP