How to Earn Points at Summer 2019’s Top Music Festivals

Articles
Max Prosperi is a part-time frequent flyer and travel writer and full-time student. Based in St. Louis, Missouri, Max covers a variety of topics with a focus on points, miles, and aviation.
Follow
May 12, 2019
•
16 min read 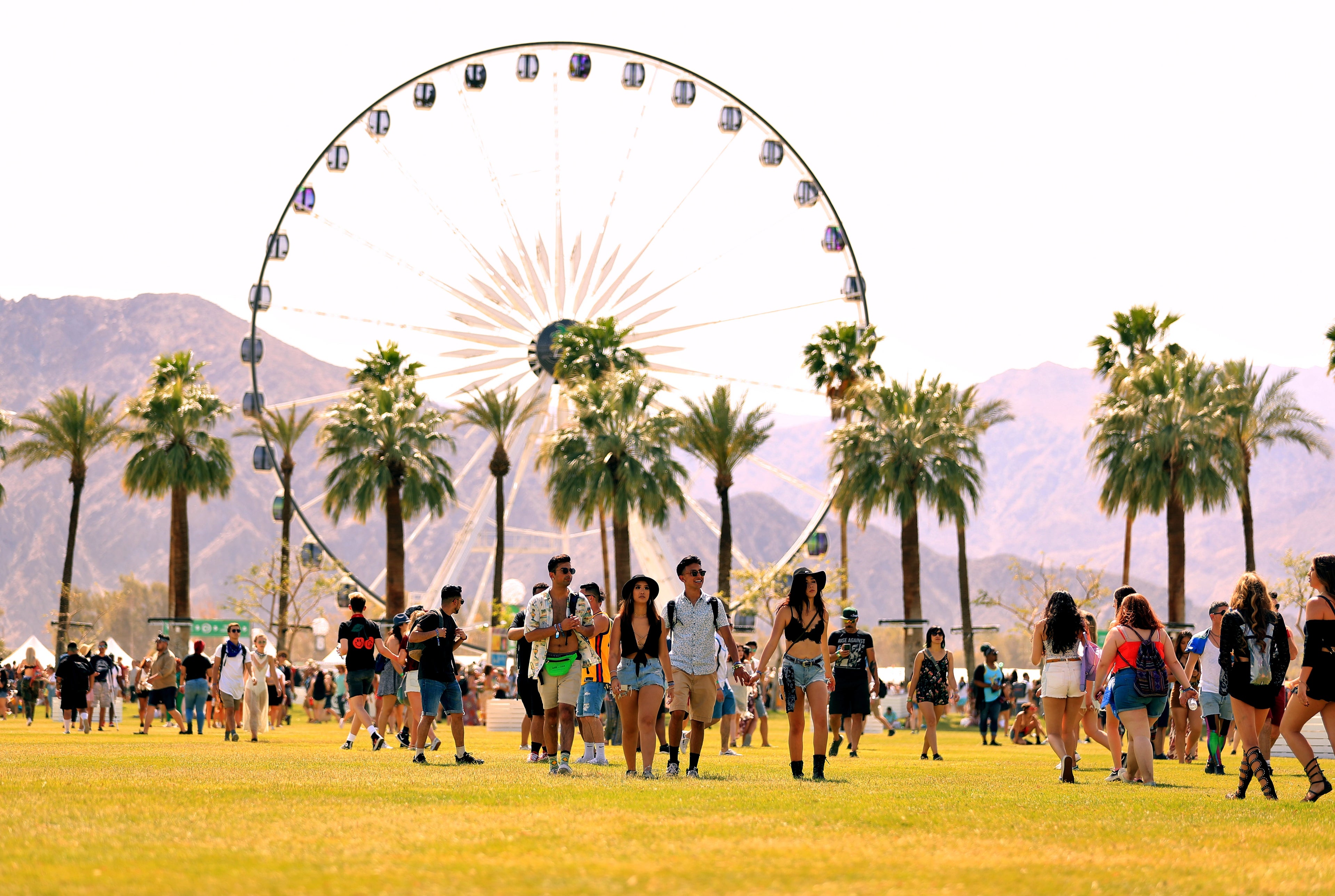 With Coachella behind us, the 2019 music festival season is in full swing with Bonnaroo, Lollapalooza, Austin City Limits and many others on the horizon. Additionally, the iconic Woodstock festival may return to mark its 50th anniversary — if the organizers are able to court new investors.

Music festivals have continued to grow in crowd size and number of performers -- and also in cost to attend. With weekend-long festivals now major purchases, festival-goers have the opportunity to earn a great deal of points and miles on those pricey tickets.

TPG breaks down the top music festivals of the summer and the credit cards festival-goers should use to get the most bang for their buck.

The Top Music Festivals for Summer 2019

A favorite with college kids and college kids at heart, Hangout Music Festival takes place on the beaches of Gulf Shores, Alabama. Essentially spring break on steroids, Hangout Music Festival features one of the more diverse lineups of any festival. This year, indie music fans can see Vampire Weekend perform music from its new album, Father of The Bride, while those who prefer hip-hop or rap can see Travis Scott do tracks from his latest and critically acclaimed album, Astroworld.

With the festival right around the corner, only three-day ticket packages remain. Hangout is one of the pricier festivals this year, starting at $319 for three-day general admission or a whopping $1,099 for VIP. Single-day passes appear to be available through Vivid Seats. Make sure to use the Capital One Savor Cash Rewards Credit Card when purchasing tickets via Vivid Seats to earn 8% cash back through January 2023. The information for the Capital One Savor Cash Rewards Credit Card has been collected independently by The Points Guy. The card details on this page have not been reviewed or provided by the card issuer.

The perfect festival for the mellow festival-goer, Bottle Rock takes place in beautiful Napa Valley, California. Unlike most festivals, Bottle Rock boasts a balanced lineup of new and old. This year, Neil Young headlines the festival along with more recent indie and indie-rock groups.

Taking place on Randall's Island in New York City, Governor's Ball is the closest the Northeast has to Coachella. With stages overlooking Manhattan and Brooklyn, this festival provides attendees with beautiful city views on an island just offshore. Assuming the weather cooperates, Governor's Ball consistently features one of the most robust lineups of top artists of any festival.

Though Coachella is often considered the top music festival in North America, there's nothing quite like Bonnaroo. Spanning four days in early June, Bonnaroo takes place on a farm an hour or so south of Nashville. It's one of the few festivals in the world that allows attendees to camp on the grounds, where there are marketplaces featuring local food, craft drinks, pop-up shops and even head shops.

Bonnaroo has a diverse lineup with past headliners including Bon Iver, Eminem and The Killers. A unique experience, Bonnaroo was once affordable to all music lovers but is now one of the more expensive festivals. General admission starts at $190 per day or $305 for three days, but attendees will likely incur other costs, such as paying to camp and use facilities like showers on festival grounds. The price of attendance might very well be worth it in 2019, however, because Phish, one of the original headliners of the festival, is returning.

One of the lesser-known festivals, Firefly takes place annually near Dover, Delaware, and attracts big names in the music industry. This year both Travis Scott and Post Malone, two of the most streamed artists in the world, are performing. Firefly is priced at or slightly below the average for major music festivals, but keep in mind the costs of overnight accommodations if you opt for a three-day pass. Single-day passes start at $119 while three-day passes start at $309.

A hipster's dream, Pitchfork features lesser-known acts performing at Union Park in Chicago, two miles away from downtown and The Loop.

One of the most popular music festivals in the United States, Lollapalooza attracts massive crowds. Also taking place in Chicago, Lollapalooza uses the city's beautiful Grant Park, which offers views of both downtown Chicago and Lake Michigan.

With a line-up including Ariana Grande, Tame Impala and dozens of other massively popular artists, Lollapalooza is quite pricey. In addition to the cost of attendance, festival-goers will need to find hotels during one of Chicago's busiest times for tourism. Single-day passes start at $130 with three-day passes starting at $340. VIP passes are pricey but arguably worth it to avoid crowds. A one-day VIP pass costs $650 while a three-day pass will set you back $2,200.

This year's lineup offers something for everyone. Headliners include Paul Simon and Lil Wayne. One-day passes are not available. Three-day passes cost a bit more than at other festivals. General admission starts at $385 while VIP passes start at $815.

In 1969, tens of thousands of young people flocked to upstate New York to partake in the ultimate music festival. Branded as an "Aquarian Exposition," the 1969 line-up included the Grateful Dead, The Who, Jefferson Airplane, Janis Joplin and Jimi Hendrix. Fifty years later, Woodstock hopes to return. Assuming festival organizers are able to find the right investors and survive a court battle, the festival will take place in Watkins Glen, New York, four hours from NYC and 2.5 hours from Buffalo, over three days in August.

Woodstock 50's lineup includes The Killers, Portugal. The Man, and Jay-Z. While a date has been set and a lineup has been released, ticket prices and packages have not yet been made available. The latest rumors estimate that a three-day pass will cost $450. Recently, reports surfaced that the festival had been canceled as investors had backed out. But, festival organizers have since issued a statement, saying they are still looking for new investors. As of May 4, only one major act, The Black Keys, has canceled their appearance.

Taking place over two weekends, Austin City Limits (ACL) is one of the top music festivals in North America, featuring performances from over 125 musical acts and one of the better food and drink scenes of any festival. Additionally, for those looking for a luxurious festival experience, ACL offers a variety of VIP ticket packages, including the Platinum Experience with spa access.

The lineup includes headlines such as Guns N' Roses, Mumford & Sons, and Childish Gambino. Ticket prices for 1-day general admission are going for $105, while 3-day GA will cost $260. Tickets are on sale here.

Already expensive, most major music festivals have increased prices for 2019. With general admission costing hundreds of dollars, music festivals are a major purchase for many. That means there are also major opportunities to earn points and miles.

However, not all credit cards are created equally. For music festivals and concerts, select cards earn just 1x the number of points or miles while others earn up to 4% cash back or even up to 8% cash back.

Here are the cards you should use when purchasing festival tickets.

The Capital One Savor Card

8% Cash Back with Vivid Seats

Capital One Savor card holders can receive 8% cashback through January 2023 on purchases made with Vivid Seats. Vivid Seats is a ticket marketplace, allowing users to buy and sell tickets much like StubHub. Tickets and passes to major music festivals are currently available, often at a reduced rate, through Vivid Seats. For example, there are dozens of tickets available for Bonnaroo starting around $300. Buying your tickets for Bonnaroo through Vivid Seats with the Capital One Savor card will earn $24 back.

Although The Platinum Card® from American Express doesn't offer additional points or miles for entertainment purchases, the card is loaded with benefits. Amex offers Platinum cardholders early access to tickets at popular music festivals, special perks and even VIP experiences at some festivals.

The Citi Premier® Card earns 2x points on entertainment and dining purchases. This means that ticket purchases for festivals as well as any food or drinks purchased on festival grounds will earn double points. While not as hefty a bonus as the Capital One Savor Card, the Citi Premier® Card features improved points redemption options as well as additional benefits and perks such as access to Citi Private Pass, which grants cardholders access to presale events as well as exclusive ticket access.

Music festivals are expensive. While offering multiple popular acts in one place as well as unique experiences around the grounds, these festivals are becoming outrageously priced. However, with the right credit card festival-goers have the ability to earn points and miles and could even receive access to exclusive tickets or VIP lounges.

Summer 2019 is shaping up as an amazing year for festivals with some of the most diverse lineups and the possible return of Woodstock. If you haven't already purchased festival tickets and made plans, you should do so now. Ticket prices, hotels and other accommodations will only increase in price over the next few weeks and reach their peak just before each festival kicks off.

For more tips and recommended credit cards for festival-goers, check out this TPG guide.

Related stories
Aer Lingus returns: Hartford gets back its nonstop flight to Europe
Top 10 LGBTQ-friendly destinations for 2022
The 5 best credit cards for Walmart shopping
Watch out, Royal Caribbean: This cruise line is bringing more big new ships to North America
Featured image by Getty Images for Coachella
Editorial disclaimer: Opinions expressed here are the author’s alone, not those of any bank, credit card issuer, airline or hotel chain, and have not been reviewed, approved or otherwise endorsed by any of these entities.