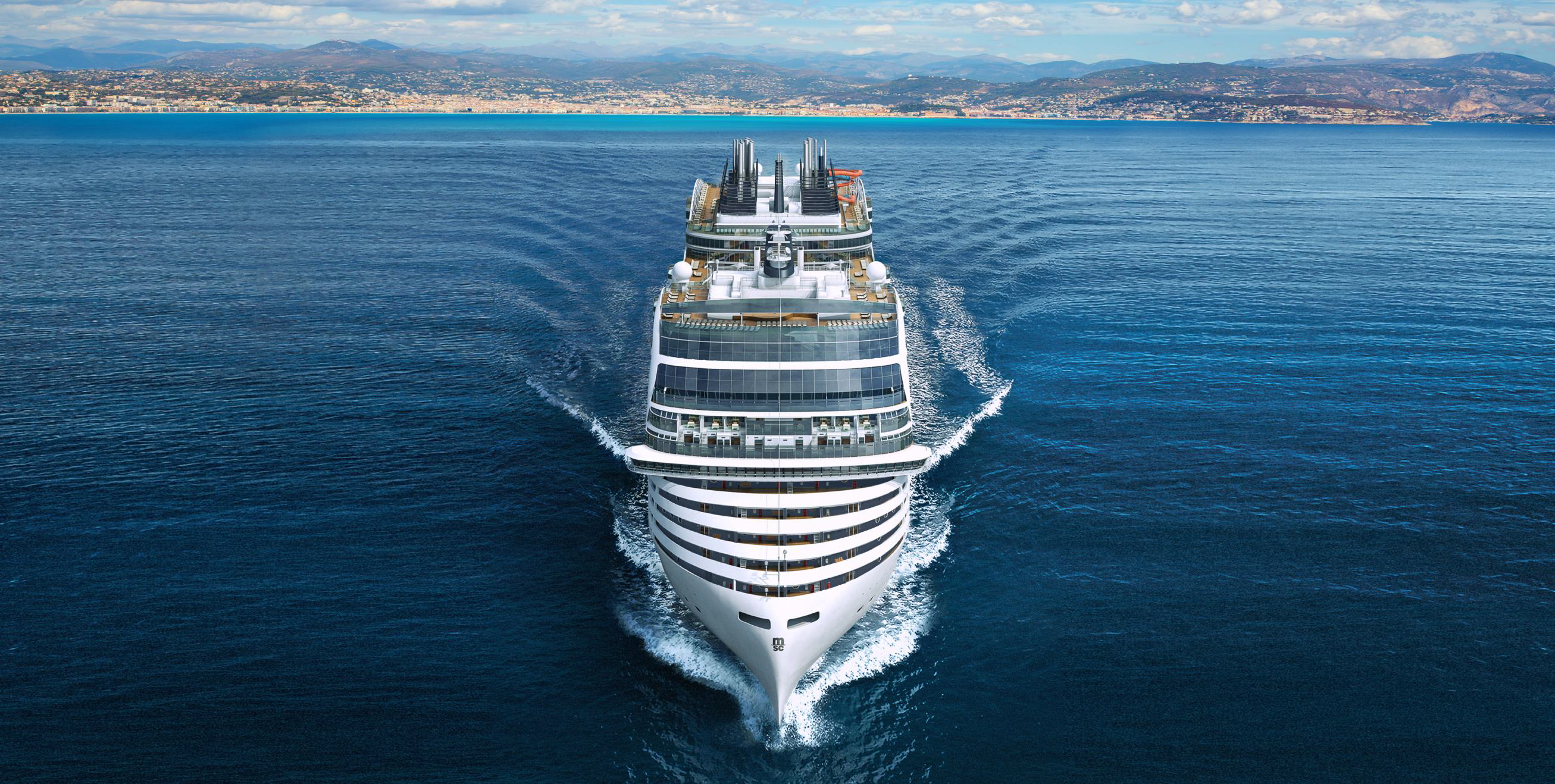 Have you heard the buzz about the giant new cruise ship under construction for MSC Cruises? If not, you will soon.

Scheduled to debut in December, this massive new vessel named MSC World Europa is an astounding 22 decks high — four decks higher than Royal Caribbean‘s Wonder of the Seas, the current size leader in the cruise world.

It’s also 1,093 feet long, which is longer than any other MSC Cruises ship ever built.

After its debut, MSC World Europa will fall just behind them in the rankings of the world’s largest cruise ships, at No. 6.

In all, MSC World Europa will measure about 205,000 tons — about 10% less than the five Royal Caribbean ships, known as the Oasis class. However, smaller is relative. At 205,000 tons, MSC World Europa still will be significantly bigger than any vessel currently operated by any line other than Royal Caribbean; this includes such cruising rivals as Carnival Cruise Line, Norwegian Cruise Line and Princess Cruises.

Like the Oasis-class ships, MSC World Europa will be able to hold nearly 7,000 passengers with all berths filled — 6,762 to be exact.

In other words, this is going to be one serious megaship.

Here’s a preview of what to expect from MSC World Europa when it begins sailing later this year.

MSC Cruises is taking a page from Royal Caribbean’s playbook by breaking down the ship’s public areas into distinct districts.

MSC World Europa will have an adults-only “Zen district” and a separate “family district” that will house 10 new kids facilities. There will also be a central interior promenade called World Galleria complete with entertainment, shops and bars.

The public areas of Royal Caribbean’s Oasis-class ships are famously broken down into seven or eight separate districts, which Royal Caribbean calls neighborhoods.

Notably, the 341-foot promenade on MSC World Europa will be half-open to the sky and half-covered by an LED “sky screen”; the screen will light up with different displays throughout the day.

One of the signature features of the promenade will be The Venom Drop @ The Spiral, a record-breaking dry slide that plunges 11 decks and ends near the promenade area.

How many pools are there on MSC World Europa?

MSC World Europa will have six pools and 14 hot tubs, making it one of the most pool-covered ships at sea.

The watery offerings will include an Aquapark with multiple waterslides that MSC Cruises says will integrate virtual reality technology. There also will be a family sun deck.

How many restaurants does MSC World Europa have?

Two new-for-the-line venues will be Chef’s Garden Kitchen (an outlet focused on microgreens), and La Pescaderia, a traditional seafood grill with alfresco seating.

Restaurants that already exist on other MSC Cruises ships will also be featured on MSC World Europa. These include the American-style steakhouse Butcher’s Cut, the Asian-inspired Kaito Teppanyaki and Sushi Bar, and the Latin American street food-inspired Hola! Tacos and Cantina.

In a twist, the ship will have three separate buffet restaurants, each with its own ambiance.

MSC World Europa will also feature a craft beer bar serving brews made on board — a first for MSC Cruises. Dubbed the Masters of the Sea Pub, it’ll span two decks.

Other drinking venues will include a cocktail bar called Elixir – Mixology Bar and a South Asian-style tea room filled with perfumes from the East. There will also be a widely stocked Gin Bar.

What are the entertainment options?

As one would expect from one of the world’s largest ships, MSC World Europa will be chock-full of entertainment venues both big and small, including — get this — a venue that will host roller disco parties and serve as a bumper cars pavilion (the latter is something we’ve seen only on Royal Caribbean ships).

These entertainment venues will include:

MSC Cruises in September announced the Luna Park Arena would host three concert-style shows — all new for the line. They'll include a "Symphonic Ibiza" show that combines a big-screen orchestra, modern Euro dance music, three specialty artists, dancers, a DJ, two vocalists and a club-style atmosphere. Also planned is a "K Pop party" where partygoers will learn dance routines and sing along with K-pop hits, accompanied by street dancers, acrobats and vocalists.

In addition, MSC Cruises announced the World Theatre would be home to five full-scale theater productions — all also new for the line. One of them, to be called "Yellow Submarine," will feature circus elements based on Beatles songs.

The line also said the Panorama Lounge would be home to four 90-minute music experiences that offer a mix of live bands, dancers, singers, aerialists and acrobats. The dancing on display during these performances will range from samba and tango to waltz, disco and lindy hop.

Does MSC World Europa have a kids area?

Developed in collaboration with Lego and Chicco (and featuring play areas that include lots of their products), the children’s area on MSC World Europa will spread over seven rooms and 8,200 square feet. This is more space than the children’s areas on any other MSC Cruises ship.

Each of the seven rooms will be dedicated to a distinct age group ranging from infants to 17 years old.

What kind of cabins can you book on MSC World Europa?

MSC World Europa will offer 19 different types of cabins, seven of which are new for the line.

Among them: cabins and suites with balconies that overlook the ship’s interior promenade and giant duplex MSC Yacht Club suites with living and dining room areas.

In addition, the ship will have the line’s first “infinite ocean view” cabins with walls of glass facing the sea that open from the top down to create a balcony-like effect. It’s a concept that first debuted on an ocean ship in 2018, on Celebrity Cruises’ 2,908-passenger Celebrity Edge.

Where will MSC World Europa cruise?

MSC World Europa will debut in December in the Persian Gulf with sailings that include a visit to Saudi Arabia — a destination rarely visited by cruise ships.

The vessel will initially sail a four-night Persian Gulf voyage from Doha, Qatar, to Dubai on Dec. 20. Then, it will begin a series of seven-night voyages from Dubai. The seven-night voyages will feature calls at Abu Dhabi, United Arab Emirates; Dammam, Saudi Arabia; Doha; and Sir Bani Yas Island. The latter is a beach and wildlife-viewing destination in the UAE that will be exclusive to MSC World Europa passengers during their visit.

In late March 2023, MSC World Europa will reposition to the Mediterranean for a series of seven-night voyages to ports in Italy, France, Malta and Spain.

Eventually, MSC World Europa (or a yet-to-be-built sister ship) is likely to operate sailings in the Caribbean out of Florida. However, such itineraries have yet to be set.

MSC World Europa will be the first of four sister ships scheduled to debut between 2022 and 2027 that will make up a new class for MSC Cruises called the World class.

Featured image by MSC CRUISES
Editorial disclaimer: Opinions expressed here are the author’s alone, not those of any bank, credit card issuer, airline or hotel chain, and have not been reviewed, approved or otherwise endorsed by any of these entities.

Our points-obsessed staff uses a plethora of credit cards on a daily basis. If anyone on our team wouldn’t recommend it to a friend or a family member, we wouldn’t recommend it on The Points Guy either. Our opinions are our own, and have not been reviewed, approved, or endorsed by our advertising partners.
See all best card offers
Related stories
News
NASA unveils futuristic plane we'd love to fly — someday
Guide
The best credit cards for concert tickets and VIP access
Guide
Quick Points: Use Flying Blue's hidden calendar search tool to find better award tickets
Guide
Amex credit card showdown: Blue Cash Preferred vs. Blue Cash Everyday