Articles
Jordi Lippe-McGraw is a writer covering travel, family, food and wellness for outlets like Conde Nast Traveler, Travel + Leisure, the New York Times, Forbes, and more. She has traveled to more than 30 countries on all 7 continents (including Antarctica at 5 months pregnant) and is an avid puppy, penguin, and truffle lover.
Follow
May 21, 2019
•
10 min read 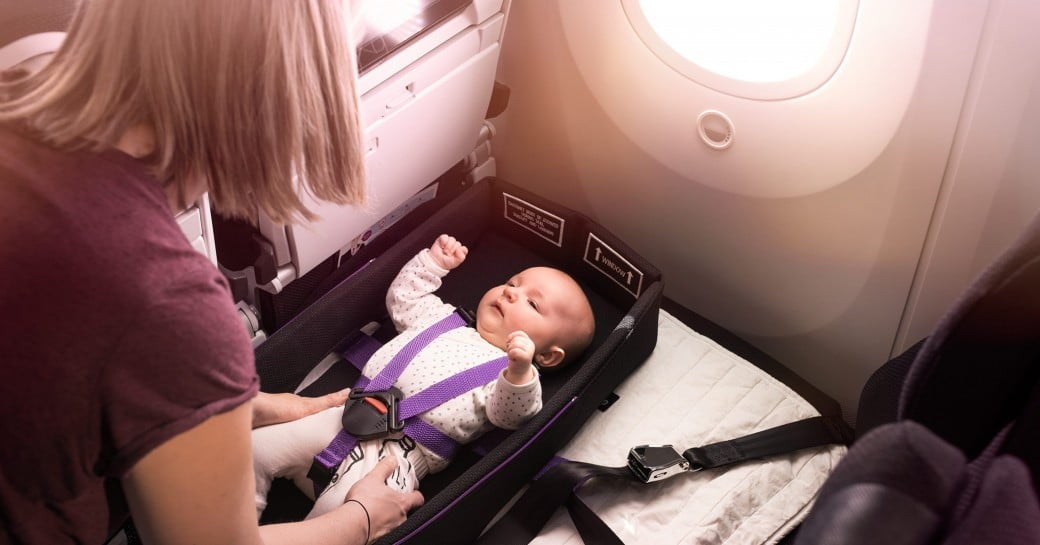 Between the ever-shrinking seats and minimal legroom, it’s already challenging to get comfortable while flying. Add a baby and you’re almost bound to step off the plane stressed and with some aches. Some airlines, however, are trying to make flights more comfortable for families, especially those traveling with infants.

While on US airlines, lap infants just have to be held without the use of lap belts and such (at least during turbulence, takeoff and landing), things are different on international carriers. Air New Zealand announced that it is using the Skycouch Infant Harness, Belt and Pod on all of its Boeing 777 and 787-9 long-haul flights, making it possible to lie flat with your baby without paying for a business- or first-class seat.

The airline first launched the Skycouch concept (where you get an entire economy row that converts into a couch) in 2010. Now they have a harness and belt system that works in conjunction with the lie-flat setup. It allows infants to lie flat during the flight. The infant pod, for the smallest travelers, acts like a bassinet that can also be hooked to the Skycouch.

The Infant Harness comes in three sizes and can hold a child up to 40 pounds and the loop can be tightened for a snug fit, which will secure the infant in the event of turbulence. Bonus: The Infant Harness, Belt and Pod is complimentary for all Economy Skycouch customers traveling with infants.

Though Air New Zealand is certainly pioneering this idea, a couple of other airlines are testing similar concepts.

If you're headed to South America, Azul has introduced its Sky Sofa, which is part of the airline's Economy Xtra offering. Here, four seats are combined to create “a spacious couch for families, couples and friends to travel together.” Azul is a Brazilian airline and is a non-alliance partner with United Airlines.

Air Astana has an Economy Sleeper, which lets passengers have an entire row with the armrests folded up. A mattress, pillow and duvet are provided. The downside? Unlike the Skycouch that has raise-able leg rests to create a larger sleeping space, the Economy Sleeper is really only three economy seats together. You barely have room for an adult and baby to lie together. Also, it’s only available on flights between Astana, Kazakhstan, and London Heathrow, Frankfurt and Paris.

While it is possible to lie with an infant with these options, Air New Zealand is the only airline offering infant-specific amenities that ensure a baby is secure at all times.

Not planning to fly with Air New Zealand, Azul or Air Astana any time soon? There are still plenty of hacks to make a flight more comfortable for you and your infant besides upgrading to business or first class.

First, most long-haul flights will have a bassinet option for younger babies. Be sure to ask your airline before the flight to reserve one as they’re typically first-come, first-served. And remember, the bassinet is really for newborns; don’t assume your 6-month-old will fit, though not all bassinets are created equally. For example, British Airways has child seats available for older babies. (If you're flying domestically, find out if the bulkhead seat is your best option with an infant.)

If you are flying with a baby who can use the bassinet option (I did when I took my then 10-week-old to Portugal), I’d suggest investing in a CoziGo. It’s a small pop-up tent that goes over the bassinet, blocking out the light and muffling the airplane sounds. This could help your little one get more sleep, and it can be used as a sun cover for the stroller.

Other options? The Skybaby travel mattress makes a little cocoon out of your arms, keeping your tot cozy and relieving the pressure of having to hold a lap child the entire time.

The Flyebaby Infant Airplane Seat attaches to the seatback in front of you -- creating a restraining hammock for your baby.

And the JetKids BedBox is a ride-on suitcase that also extends to bridge the gap between seats. You can place a mattress on top and let your little one lie flat on top of it.

Some parents even use a Doc-A-Tot — aka a soft travel bassinet — by placing it on the floor or in empty seats.

But just know that not all airlines and not all flight crews will permit the use of items such as the BedBox. In fact, some US airlines expressly prohibit them (such as United) -- while some international airlines expressly permit them (such as Cathay Pacific). If you don’t want to buy a separate item, you can always take your chances that there are empty seats on the plane. Sometimes the airline will put you next to an empty seat if you ask the gate agent nicely, and you can bring your car seat onboard without having to pay for an additional ticket. (These airlines had the most empty middle seats.)

With any of these options, it’s important to remember that the rules and options vary dramatically by airline and sometimes even the crew on your particular flight. So, have a Plan A to keep your infant comfy on the flight, but don't be afraid to switch to Plan B as needed.

Related stories
Save money with these travel-related offers on your credit cards this month
Use these shopping portal bonuses to earn extra miles this holiday season
Using miles and points to book airline tickets and hotels for others
Maui magnificence: A review of Kaanapali Alii, a Destination by Hyatt Residence
Featured image by SkyCouch Infant Pod (photo courtesy of Air New Zealand)