7 hotels where presidents have stayed

Articles
Tanner Saunders is a senior hotels reporter for TPG, a corgi dad and chicken fried steak fanatic. Originally from Texas, Tanner now lives in Brooklyn, but you are more likely to find him scouting out your next best home away from home.
Follow
Feb. 21, 2022
•
9 min read 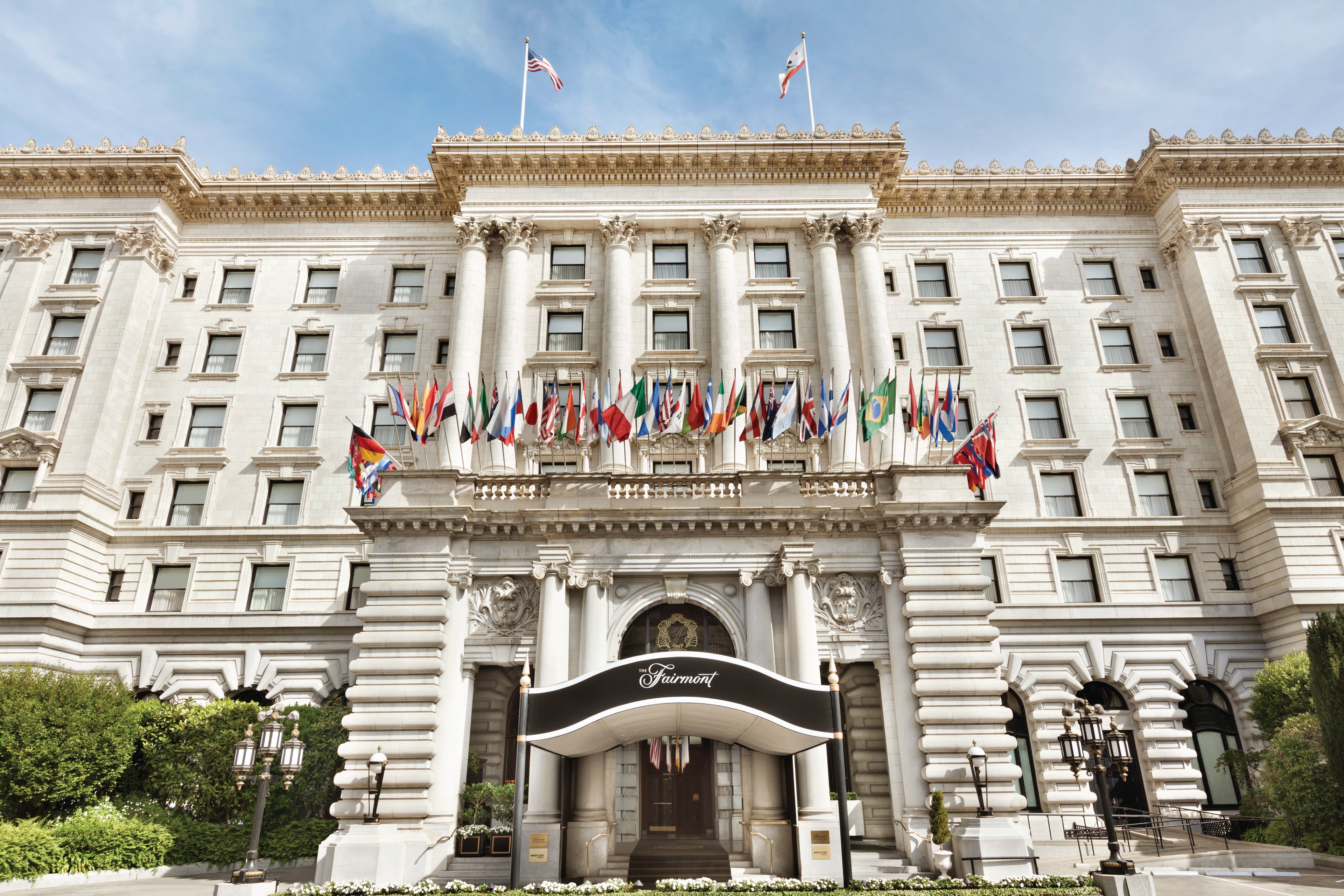 1600 Pennsylvania Avenue might be the most famous address in the U.S., but the White House isn’t the only place where presidents go to sleep at night.

While Air Force One is responsible for transporting the commander in chief around the country, on many trips the president stays at hotels like the rest of us. That said, it’s safe to assume that the president of the United States gets a swanky upgrade — hopefully to a presidential suite or something better — without having elite status.

Over the years, some of the most notable hotels from the Atlantic to the Pacific have hosted presidents and, in many cases, they've had multiple visits from different presidents spanning decades. Whether you’re looking to stay like a dignitary on your next vacation or just curious to know where our leaders lay their heads beyond the walls of the White House, here are a handful of illustrious hotels that have welcomed U.S. presidents over the years.

A hotel with its own political roots, the Fairmont San Francisco — the one that launched the Fairmont brand — was opened by the daughters of U.S. Sen. James Graham Fair and dedicated to him in the early days of the 1900s. Over the years, it has played host to nearly every single president from William Howard Taft, the 27th president, to Barack Obama, the 44th.

Beyond its presidential history, the hotel was the backdrop of the first United Nations Conference on International Organization in 1945, which lead to the signing of the U.N.’s original charter.

Today, guests who visit the Fairmont San Francisco can bask in the history of the hotel or enjoy a drink at the Tonga Room & Hurricane Bar, where live music comes from a boat floating in an indoor "lagoon."

How to book: Rates for the Fairmont San Francisco can be found as low as $350 per night. Members of Accor Live Limitless can trade in 2,000 points at a time to knock off 40 euros (roughly 45 bucks) from the final total.

When the Arizona Biltmore opened its doors in 1929 it was one of the grandest hotels in the country. In fact, it had the second-largest gold leaf ceiling in the world, only falling behind the Taj Mahal. The hotel received plenty of famous guests throughout its nearly 100-year history. It was here that Irving Berlin wrote "White Christmas," one of the most famous Christmas songs of all time, and Marilyn Monroe said it was home to her favorite swimming pool.

Here, every president from Herbert Hoover through Barack Obama has paid a visit. In fact, Ronald and Nancy Reagan spent their honeymoon at the hotel.

How to book: Cash rates can be found starting at around $340 for Hilton Honors members. A standard room reward is 80,000 points per night.

Once dubbed the “Grand Hotel of the West,” The Pfister Hotel opened its doors in 1893 to attract tourists to Milwaukee. Home to a number of high-profile political events and guests throughout its history, the first presidential visit came in 1897 when William McKinley stopped in. Other presidents who have visited include Theodore Roosevelt, William Howard Taft, Woodrow Wilson, Warren G. Harding, John F. Kennedy and Barack Obama.

According to the hotel, this grand dame is also home to the largest Victorian art collection of any hotel in the world. Collected over the years by the hotel's founder, Guido Pfister, guests today can take a self-guided tour of the collection or schedule a guided tour with The Pfister's artist-in-residence.

Known as the "Hotel of Presidents," The Blackstone, now part of Marriott's Autograph Collection, has hosted more dignitaries, celebrities and influential people than can possibly be remembered. Originally opened in 1910, this hotel sits on Chicago's Cultural Mile, and was where Al Capone got his hair cut while holding meetings and where the Duke and Duchess of Windsor stayed while visiting the Windy City.

It was here, in a three-room suite now called the Smoke Filled Suite, that Republicans secretly secured the presidential nomination of Warren G. Harding during the 1920 Republican National Convention; a reporter famously described how the event "happened in a smoke-filled room."

The three-bedroom Suite of Presidents is equally storied. It was here that Harry S. Truman gave a surprise piano performance for the staff; Dwight D. Eisenhower watched his presidential nomination on TV in 1952; and JFK was snacking on Boston clam chowder when he was told to return to the White House during the Cuban missile crisis.

How to book: Today you can live like a president by booking a cash room at The Blackstone starting at $126 per night. As a Category 5 Marriott Bonvoy hotel, award nights can be found between 30,000 and 40,000 points per night, at least until Marriott's new dynamic pricing starts in March.

At The Mission Inn Hotel & Spa in Riverside, California, no fewer than 10 U.S. presidents have paid a visit. This stunning resort started life as an adobe boarding house in 1876. Transformed over the years into a hotel worthy of presidents and celebrities, it's also served as the backdrop for some of Hollywood's earliest films. Notable guests include Booker T. Washington, Susan B. Anthony, Amelia Earhart, Albert Einstein, Hellen Keller, Judy Garland, Bette Davis and more.

Honoring the presidents who have stayed — including William Howard Taft, Herbert Hoover, Richard Nixon, Ronald Regan and George W. Bush — the Presidential Lounge is the place to grab a drink and talk politics. Decorated with portraits of visiting presidents, bronze and gold accents and a stained-glass skylight dome, you'll really feel the commander in chief here. To top it off, order a presidential-themed cocktail, like the JFK Cosmopolitan or Herbert Hoover Lemon Drop — you'll soon be thinking up treaties and declarations that are bound to get you reelected.

How to book: Deluxe rooms start at $219 per night.

When presidents head to paradise, they tend to make a stop at The Kahala. A magnet for celebrities and dignitaries since it opened in 1964, the resort's secluded location, away from the rest of Honolulu, has made it an ideal getaway for the rich and famous. Every president between Lyndon B. Johnson and Barack Obama has stayed at The Kahala. In fact, Obama, a Hawaii native, is known to stay at a private residence at the resort when returning to Hawaii with his family.

How to book: Cash rates for The Kahala Hotel & Resort start at $535.

Home to eight mineral springs that people have claimed have special "curative properties," the Omni Bedford Springs Resort started life as The Stone Inn in 1806. Since then, it has been transformed into a prestigious resort that has witnessed key moments in American history. It also boasts one of the nation's first golf courses, two swimming pools and a world-class spa.

Some of the presidents who visited the property while out of office include Thomas Jefferson in 1819 and James Buchanan in 1821. While in office, Buchanan spent so much time at the hotel that it became his "summer White House." In 1848, James K. Polk became the first sitting president to visit, followed by Andrew Jackson, John Tyler, Zachary Taylor, James Garfield and William H. Taft. In 1858, Buchanan received the first presidential transatlantic cable in the hotel's lobby.

How to book: Cash rates, on average, can be found starting at $229, though advance booking options can be found with a 10% discount.

Featured image by The hotel that started a collection - the Fairmont San Francisco. (Photo courtesy of the hotel)
Editorial disclaimer: Opinions expressed here are the author’s alone, not those of any bank, credit card issuer, airline or hotel chain, and have not been reviewed, approved or otherwise endorsed by any of these entities.