Articles
Bill Fink is a senior writer for The Points Guy covering travel news, trends, and cool adventures. His award-winning stories have been featured in AARP, BBC Travel, Frommer's, Lonely Planet, National Geographic, Outside, Yahoo Travel and many others.
Follow
Aug. 25, 2022
•
8 min read 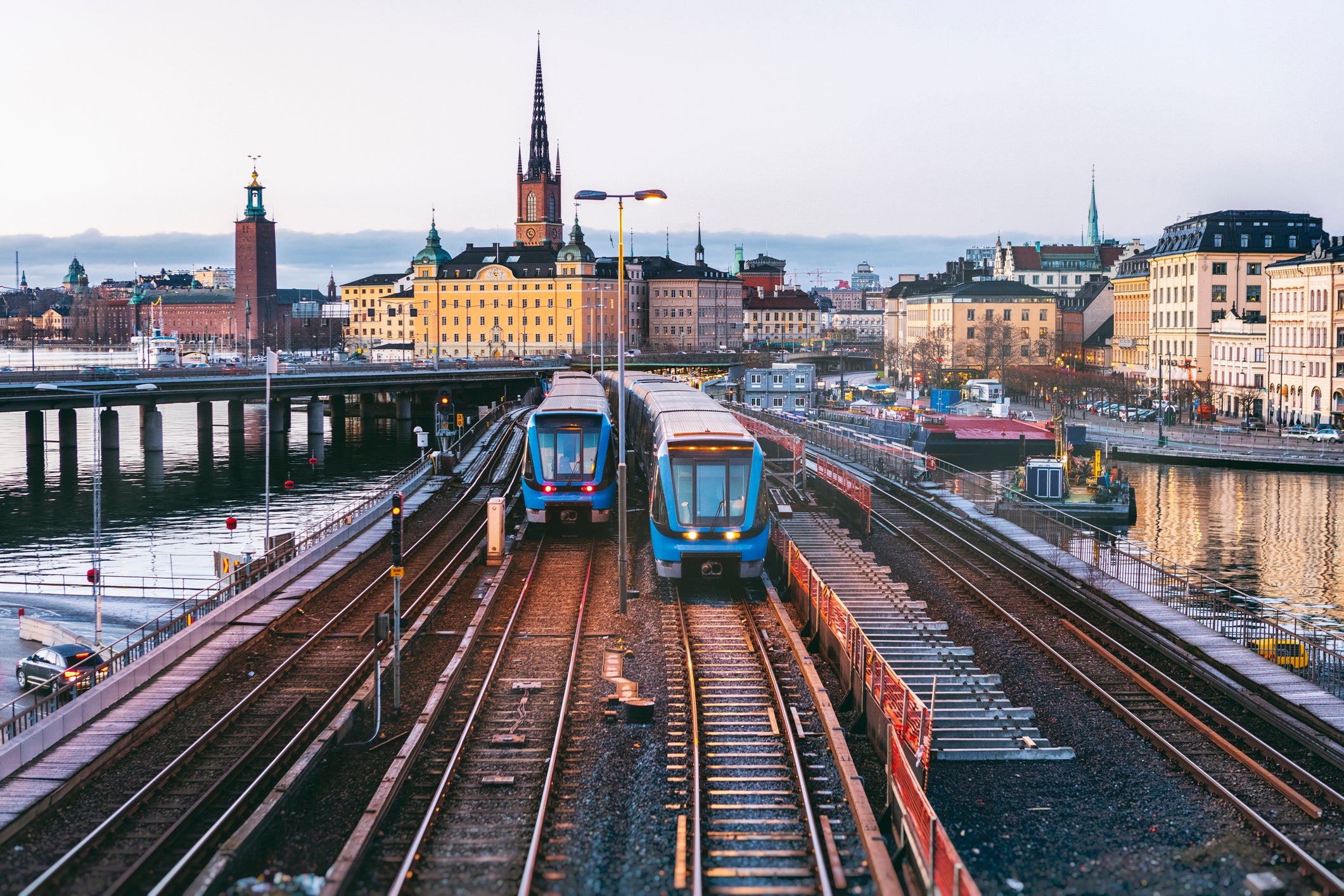 After a summer of air travel headaches complete with flight cancellations and delays, luggage disasters, security and customs hassles and even the threat of melting airport runways, some people are beginning to think taking the train while in Europe may be a better idea.

Europe's train system, particularly for intra-country travel, is a well-developed and affordable option for travelers visiting the region. You won't have to deal with long airport security lines, airport commute hassles, luggage fees and a host of other problems. Instead, you can just hop on a long-distance train from the city center of virtually any major European city to get to your final destination.

European trains often offer a couple of complimentary conveniences and the freedom to stretch your legs and stroll to a dining car for a bit to eat or drink. Not to mention, trains rarely come with the problems that many European airports and airlines have faced this summer.

Read on to discover some of the benefits of European train travel and learn about a few of the region's most notable routes.

Reasons to take the train

You'll need to set aside more time for taking the train than you would to fly and may not initially save a ton when traveling by rail, especially given the number of European discount air carriers offering rock-bottom fares in recent years. However, there can still be cost and timing benefits for train travel when you factor in all parts of your trip.

No security and customs screening lines

Simply walking on and off trains with your luggage in hand is a time-saving luxury not experienced by air travelers for decades. Beyond the physical burden of the screening process at airports, the queues you'll need to wait in to even get to the screening counter for security, passport control and customs can add hours to the experience. As a result, what you had hoped would be a quick flight may feel more time-consuming than traveling by train.

Many airlines, especially budget carriers, will not provide Wi-Fi. If they do, they often charge a high price for it on most short-haul flights. Most long-distance European trains, however, come with Wi-Fi included with the ticket price. Additionally, you'll have much more legroom and tray table space at your disposal, so you can comfortably kick back and get some work done as you go.

The price, stress and timing of getting to an airport can set your trip off on the wrong note. Taking a train from the central station of your favorite European city is typically far more convenient than schlepping outside the city to an airport. This is especially true if you're staying in or near the city center. Depending on where you stay, you may even find it possible to walk directly to or from the station.

European trains run on regular schedules and are not subject to the same weather and air traffic control delays as airplanes. Plus, trains are rarely oversold like planes are, and you won't get bumped by someone with a higher status. Some overnight trains and those with longer, more complicated itineraries may have delays on the rails to make way for overnight freight traffic. However, generally, delays are far less likely to happen.

You may not regularly think about how environmentally friendly your trips are, but it doesn't mean your travels don't play a part in the larger conversation about the environment. Many experts agree that there is a substantial environmental benefit to traveling by train instead of flying.

"A journey from London to Paris by air emits around 10 times as much CO2 as the same journey by rail," said Tom Hall, a writer and train specialist at Lonely Planet (which, like The Points Guy, is a Red Ventures-owned company). "As travelers look for more sustainable travel choices, longer-distance rail routes are gaining in popularity."

Unsurprisingly, there are many options for traveling by train in Europe. However, there are four in particular that are especially convenient for travelers.

London to Amsterdam with Eurostar

Heathrow Airport (LHR) in London and Amsterdam Airport Schiphol (AMS) have been two European airports regularly plagued by problems this summer. Both have suffered from a laundry list of maladies, including canceled flights, a mountain of lost luggage, restricted ticket purchases and labor actions. TPG's own London-based writer Ben Smithson has taken Eurostar trains multiple times to "avoid LHR, and anything out of Amsterdam."

The Eurostar route from central London to Amsterdam's city center takes a little less than four hours to complete. By taking this train through the Channel Tunnel, which connects the continent to the United Kingdom, you'll skip all the hassles of transiting through both airports. Round-trip tickets start around $80 per person, a reasonable price given how expensive taxi rides to Heathrow from downtown London can be on a busy day.

Vienna to Paris with Nightjet

Sleeper trains, which have long been a popular way to travel around Europe on a budget, saw diminished demand in the past decade due to the rise in discount flights.

However, with the combination of new technologies to link different rail systems, the environmental concerns around flying and the nostalgia that comes with traveling by rail, sleeper cars are once again becoming popular. It also doesn't hurt that the price of a ticket includes a night of lodging (in a private compartment, if you so choose).

The Austrian Federal Railway's Nightjet and its partner EuroNight Trains offer a number of long-distance and overnight routes to more than two dozen European cities. You'll be able to travel as far south as Rome all the way north to Stockholm, plus multiple cities in between.

Since the train company is based in Austria, it's worth trying out a Vienna-based itinerary to a popular destination like Paris. This journey takes about 14 hours from start to finish, with the round-trip fare for the route costing at least $200 per person.

Spurred by the "flygskam" or "flight shame" environmental movement popularized by Swedish activist Greta Thunberg, Swedish train operator SJ has unveiled its new SJ EuroNight overnight train service, which will travel between Stockholm and Hamburg beginning Sept. 1. The 13-hour trip will include stops at several stations, including one in Copenhagen.

While this certainly isn't the quickest way to travel between these cities, you'll enjoy some nice sightseeing along the way, especially during the warmer months when it stays lighter longer in northern Europe.

Tickets for the route start at $35 per person. Know, though, that you'll need to pay more for access to a sleeping compartment.

Intercity travel around Italy with Trenitalia

Italy's national rail network is a great way to get around the country and escape airport hassles. The Trenitalia Pass is an affordable and flexible option to use as you travel from one Italian destination to the next, as you can book several trips within a seven-, 15- or 30-day period for as little as $128.

If you don't want to commit to buying a pass, you can instead purchase individual tickets from Trenitalia. Fares for its popular route connecting Rome and Florence, Italy, which takes a little more than one and a half hours, cost less than $60 per person round trip.

Related: Flight and rail options for traveling in Europe

Despite budget airlines offering cheap fares to most European cities, taking an intercity train trip can still be an affordable option. As an added bonus, it's often far less stressful than transiting through airports.

Rather than worry about delays and cancellations, lost luggage, long customs lines and more, you can focus on work, socialize with travel companions or simply admire your surroundings as they pass by your window. You can also take comfort in knowing your trip is less harmful to the environment than if you were to travel by air.

Related stories
Chase extends current Pay Yourself Back categories; adds new category to Ink cards
10 essential items for traveling teens
Hurricane Ian regaining strength; airports and theme parks in Florida remain closed, cruises canceled
The 2nd exclusive Delta One business-class lounge is coming to Los Angeles
Featured image by Getty Images
Editorial disclaimer: Opinions expressed here are the author’s alone, not those of any bank, credit card issuer, airline or hotel chain, and have not been reviewed, approved or otherwise endorsed by any of these entities.