How fast is the internet on a Crystal Cruises ship? We put it to the test 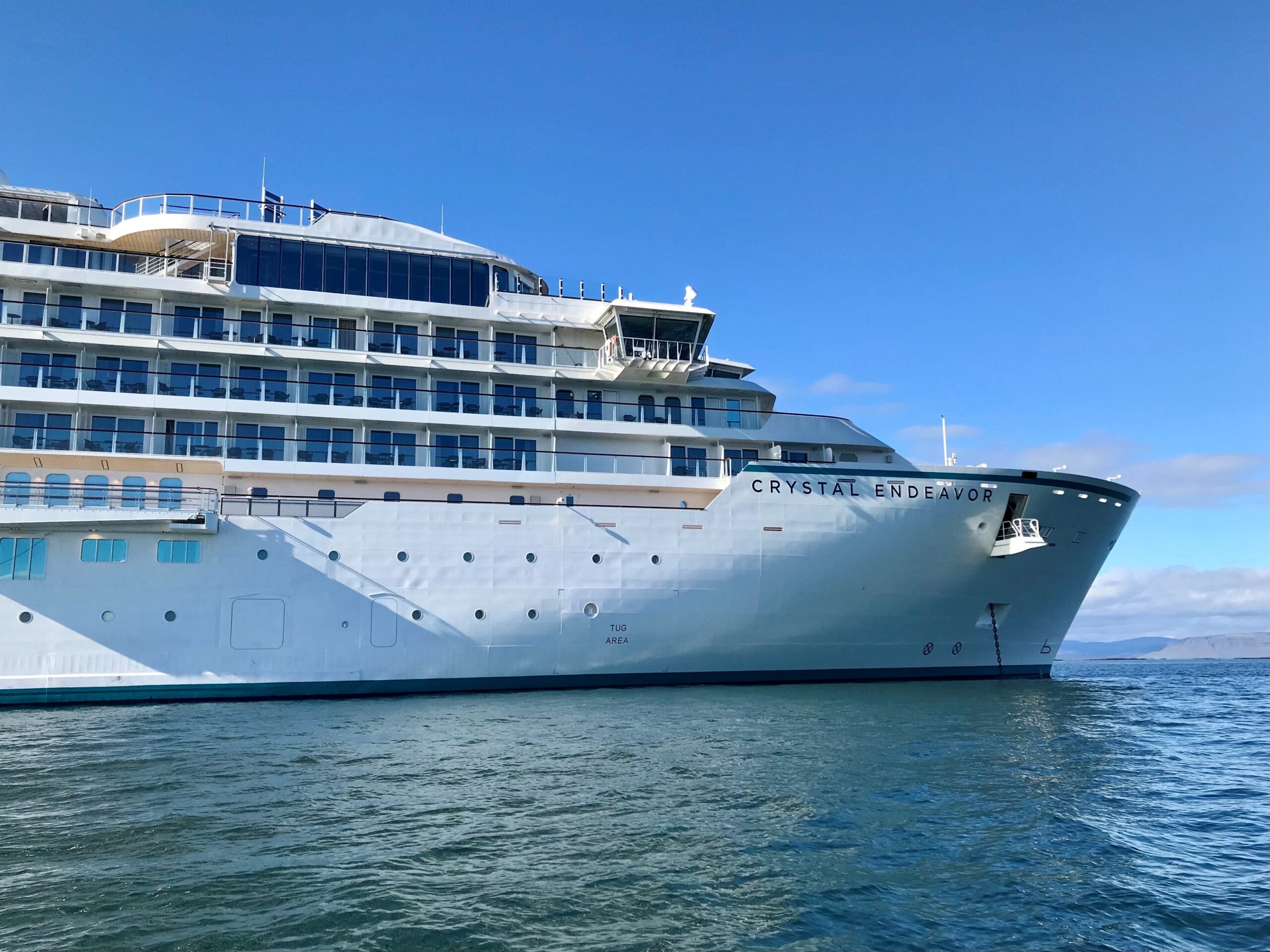 Looking for an expedition cruise ship with internet service fast enough to let you do video calls with your office back home?

Your short list should include Crystal Endeavor, the hardy new expedition vessel from Crystal Cruises.

As I found in recent days during a series of speed tests, the internet on Crystal Endeavor is surprisingly fast for an expedition ship, allowing for lengthy video calls without hiccups and the streaming of some (but not all) video content.

Just don't expect to be able to do bandwidth-hogging activities such as gaming. While fast by cruise ship standards, the internet service of Crystal Endeavor remains far slower than what you're probably used to at home.

I put Crystal Endeavor's internet service to the test as it sailed on one of its first departures with paying passengers -- a 10-night voyage around Iceland that included landings by Zodiac boats in remote areas and a brief foray above the Arctic Circle.

Unveiled in July, the 200-passenger Crystal Endeavor is the newest Crystal Cruises vessel, and -- as I'll explain below -- that's a factor in the internet speeds it's able to offer.

How internet works on cruise ships

I'll get to the results of my speed tests on Crystal Endeavor in a moment. But first, for those of you who haven't cruised before, here's a little primer on internet on ships:

Unlike at resorts on land, the internet on cruise ships is often quite expensive -- more than $20 a day on some lines. You could easily spend upwards of $100 a week on cruise ship internet just to connect with one device. You'll often pay even more if you want to have multiple devices online at the same time.

RELATED: 5 amazing adventures you can take on Crystal Endeavor

Internet on cruise ships also generally is much more sluggish than what you've experienced on land. On many cruise vessels, you'll be lucky to get download speeds of 5 megabits per second (Mbps). Where I live in North Carolina, the local cable company's least-expensive internet package promises download speeds of 200 Mbps.

Cruise lines really are doing their best to deliver fast, affordable internet just like you'd find at home. And they've made great strides in recent years.

But delivering fast, inexpensive internet to people on ships that are on the move in the open ocean is neither easy nor inexpensive. Remember, there are no high-speed cable lines connecting to moving cruise ships, or line-of-sight transmitters, except when they're close to ports. When you're getting internet on a cruise ship, you're getting it via a very expensive satellite system that's designed to be compatible with a moving target like a cruise ship.

Unlike some lines, Crystal Cruises doesn't offer multiple grades of internet service on its ships. There is no "fast service" available as an alternative to a "regular service" or a "slow service." There is just one speed of internet available on each of the line's vessels.

Once you're on board a Crystal ship, you'll be able to access the internet relatively easily from a computer or a smartphone by connecting to the ship's Wi-Fi signal and then entering in your name and cabin number. There are no complex passwords to remember to get online.

In general, you will be able to do most of what you can do at home through the internet on Crystal ships. But the line does block some applications that use a heavy amount of bandwidth. On its website, the line specifically calls out Skype as a service that is "currently not available/supported" on the line's ships and also says "certain streaming services" are not supported.

In testing, we noticed that Netflix did not load when we tried to use it. But we were able to watch video found on various other sites including news sites.

What does Crystal's internet service cost?

Here's what may be the most notable thing about internet access on Crystal ships: It's entirely free.

That's right, you won't pay a single cent to surf the web or check your emails while sailing with the line.

This is unusual in the cruise industry, where -- as noted above -- internet access often comes with an enormous daily charge. On a recent sailing that I did with Celebrity Cruises, top-speed internet service came with a sky-high cost of $34.99 per day for a single device. That worked out to $244.93 for a week-long voyage.

Crystal Cruises is one of just a handful of very high-end luxury lines that include internet access for free as part of an all-inclusive fare structure.

RELATED: Why the cabins on Crystal Endeavor blew me away

While the base fares for Crystal sailings are notably high, the line includes not only shipboard Wi-Fi, but also most premium drinks as well, including a wide choice of fine wines and spirits, plus gratuities in its base fares.

On Crystal Endeavor voyages, guided expedition landings by Zodiac and other expedition-type activities such as guided kayak trips also are included in the fare.

How fast is Crystal's internet service?

I ran speed tests of Crystal Endeavor's shipboard internet many times during the sailing, at different hours of the day, using the website speedtest.net both on my laptop and on an iPhone. What I found was that the service usually offered download speeds of between 4 Mbps and 12 Mbps. The upload speeds typically were around the same amount, which surprised me. During a recent test of the internet on a Royal Caribbean ship in the Caribbean, the upload speeds only were about half of the download speeds.

Here's a speed test I conducted at about 10 a.m. on Sept. 13 when Crystal Endeavor was docked at Seydisfjordur, a small settlement of about 700 people on the eastern coast of Iceland. It recorded download speeds of 11.24 Mbps and upload speeds of 10.80 Mbps.

Below is another speed test I did later the same day as Crystal Endeavor was sailing in open water off the southeast coast of Iceland on its way from Seydisfjordur to Reykjavik, Iceland.

As you can see, both the download and upload speeds for the internet on Crystal Endeavor at this point (down at 6.78 Mbps; up at 7.13 Mbps). were significantly lower than they were while docked in Seydisfjordur. But they still were quite high compared to the speeds I've recorded recently on some other vessels that tout high internet speeds.

In the speed tests that I did recently on the Royal Caribbean ship, for instance, I found that download speeds rarely went far above 3 Mbps. The upload speeds typically were around half that amount.

That is, when it was operating correctly. There was one period early in the sailing when the internet was completely down for a good part of a day. We were warned in advance that this would happen, and it was blamed on the need for adjustments to the system by technicians (something that is likely specific to the ship's recent start-up).

There also were quite a few other times during the sailing when the internet seemed to go out for just a few minutes before coming back up.

As noted above, I also wasn't able to stream Netflix while on board Crystal Endeavor.

In theory, the ship has enough bandwith to allow for such streaming (Netflix says the minimum speed required to stream is 0.5 Mbps. Netflix recommends 3 Mbps for standard definition streaming and 5 Mbps for high-definition streaming). But Crystal blocks some streaming sites to conserve bandwith, which it says it does to make sure everybody on board is able to benefit from the free WiFi that the line offers.

By contast, I had no problem using the internet on Crystal Endeavor to participate in a nearly four hour video staff meeting on Zoom while the ship was far away from land in the open water. This, to me, was impressive, given that the vessel also was sailing through some unusually rough seas at the time (the waves were around 22 feet), which was rocking the ship -- and its satellite dishes -- significantly.

Over the four-hour period, my screen only froze a few times -- in most cases, when small groups of participants were split out into breakout sessions for discussions.

Internet service on cruise ships is generally faster on newer vessels, and Crystal Endeavor is by far the newest Crystal ship sailing on the world's oceans. Newer ships have been wired from the beginning with higher-speed internet in mind.

Internet speed on cruise ships also can be affected by where they are located at any given time, and also by the weather -- both factors that can affect the connection to satellites.

It is likely that there will be some very-remote places that Crystal Endeavor will go, particularly in the polar regions, where passengers may lose internet for a time due to a lack of satellite coverage. As I have experienced first-hand, there are parts of the Russian Arctic, for instance, where pretty much every expedition ships loses internet connection for a time.

Crystal Endeavor, the new expedition ship from Crystal Cruises, may not offer internet that is as fast as you get on land. But for a cruise vessel, it boasts a surprisingly strong internet service -- and one that comes at no extra cost, to boot.

Related stories
Another Prime Day is coming — maximize your Amazon purchases with these credit cards
Best travel pants for women
How to earn points in the JetBlue TrueBlue program
Big news: Virgin Atlantic is joining SkyTeam alliance
Featured image by The 200-passenger Crystal Endeavor. (Photo by Gene Sloan/The Points Guy)
Editorial disclaimer: Opinions expressed here are the author’s alone, not those of any bank, credit card issuer, airline or hotel chain, and have not been reviewed, approved or otherwise endorsed by any of these entities.