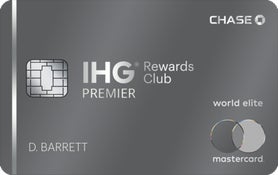 Frequent visitors to IHG hotels and resorts can earn extra points when using the IHG Rewards Club Premier card. Other IHG-specific perks, such as elite status and an annual reward night award worth up to 40,000 points, can help cardholders enjoy their stays even more. (Partner offer)

Card Rating is based on the opinion of TPG's editors and is not influenced by the card issuer.
4/5

For $89 a year, the IHG Rewards Club Premier Credit Card can be an asset in the wallets of IHG loyalists. While the earning potential outside of IHG is relatively low, perks such as a fourth reward night on award stays and an annual anniversary reward night can add a lot of value to any traveler’s wallet.

IHG loyalists can benefit from carrying this card since it will help you to take full advantage of the IHG experience. Cardholders receive complimentary IHG Platinum elite status, a discount when buying IHG points, and a fourth night reward on stays booked using points. Add in an anniversary award night each year worth up to 40,000 points, and you’re looking at potentially hundreds of dollars in value each year.

The IHG Rewards Club Premier Credit Card earns 10x points at IHG hotels and resorts. Cardholders can also earn up to 10x points for being a Rewards Club member and 5x points for reaching Platinum Elite Status which comes complimentary with the card. This card earns 2x points at gas stations, grocery stores and restaurants. It earns 1x points on all other eligible purchases.