How to Plan a Perfectly Magical Disney Wedding 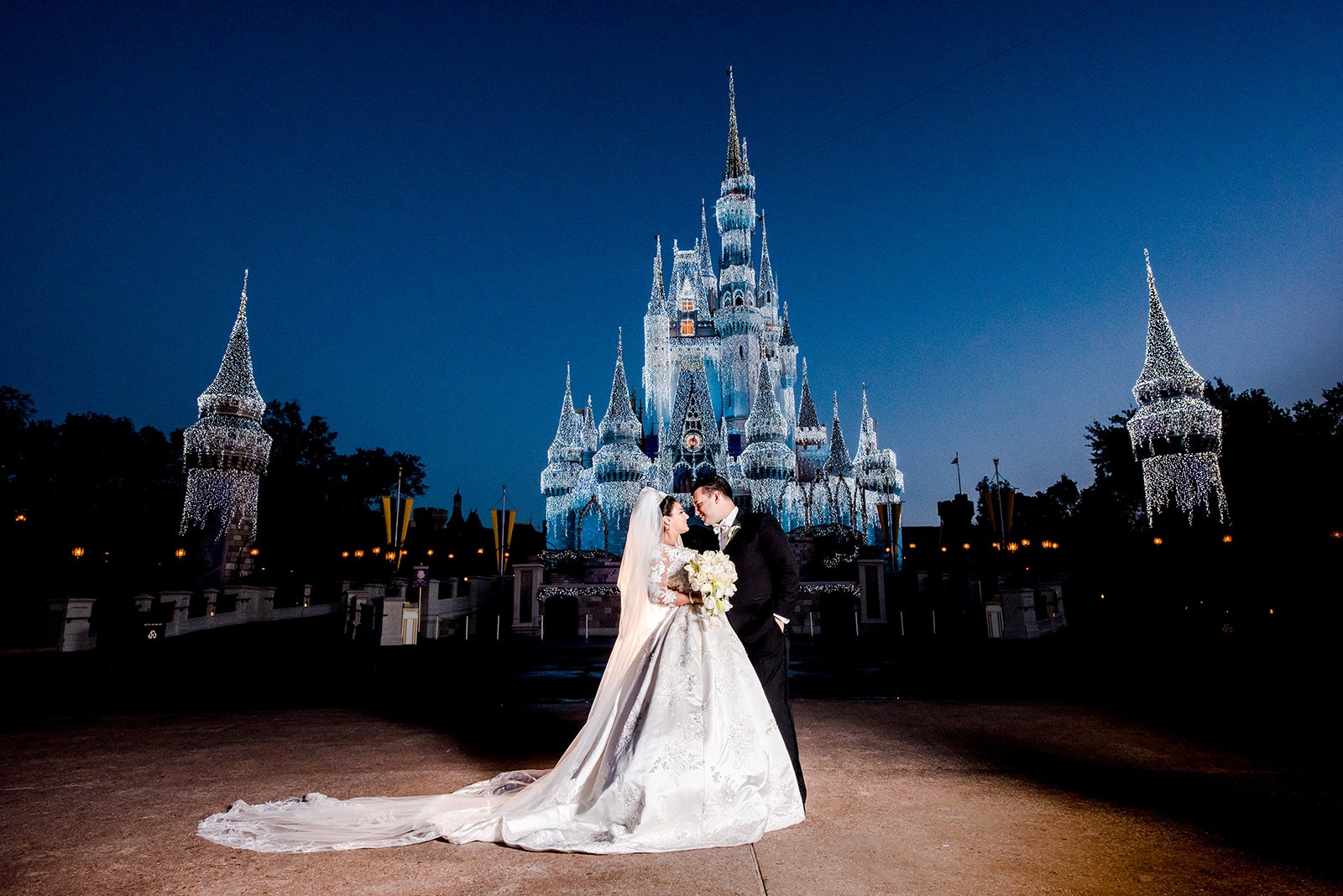 How to Plan a Perfectly Magical Disney Wedding
This post contains references to products from one or more of our advertisers. We may receive compensation when you click on links to those products. Terms apply to the offers listed on this page. For an explanation of our Advertising Policy, visit this page.

Princesses. Carriages with footmen. Gazebos dripping with twinkling lights and flowers. Disney’s Fairytale Weddings & Honeymoons website promises modern fairytale weddings for the bride that wants her big day to feel ripped from the pages of a bedtime story. So, who exactly are these women whose ultimate fantasy is stepping out of a crystal carriage to find two men in powdered white wigs taking her hands? Surprisingly, they’re not all brand super fans.

“Americans tend to have a secret belief that their wedding days ought to be flawless and perfect, and a Disney wedding package is as close as you may be able to get to an ideally stage-managed event,” said Jason Cochran, author of "Frommer’s EasyGuide to Disney World, Universal, and Orlando."

They’re not all starry-eyed 20-something couples, either. “You'll also see a fair number of second marriages there, especially if the bride or groom has kids from a previous marriage in tow.”

And they’re also not all American. Couples come from all over the world to marry in Disney parks and resorts — and these “prince and princess” fantasies, it seems, do not come cheap. Packages at the Walt Disney World theme park in Orlando, FL start with the “Memories” package — which costs $3,500 for four guests (plus the wedding couple), including the site fee, a bouquet, a violinist, a photographer, a driver and a wedding planner, and require a commitment to purchase two nights at a Disney Resort hotel — and go up to $12,000-plus “Wishes” package for a minimum of 18 guests. The cost of the required reception starts at $140 per person, for example, for brunch. It’s pricey, but perhaps not compared to marrying in some major international cities, such as New York or London.

Guests can hold large weddings at the park’s attached resorts, too, such as at Disney’s Grand Floridian Resort & Spa or Disney’s Polynesian Village Resort. Couples can now also exchange their vows among giraffes and zebras at Disney’s Animal Kingdom park, the newest ceremony location on offer, and the company made headlines three years ago when they finally opened up weddings in front of Cinderella’s Castle.

“The special wedding pavilion by the Grand Floridan was built with a perfect sightline to the Magic Kingdom behind it — the view of Cinderella’s Castle is placed in the center of the altar — and it gets regular, daily use,” explained Cochran. “I wonder how many American children are running around today who can trace their parents' wedding back to that room. It's probably way more than we imagine.”

You can also marry at Disneyland Resort in Anaheim, California, the company’s Hawaiian Aulani Resort in Ko Olina, Oahu, or on one of Disney Cruise Line’s four cruise ships. The cruises may just be the most reasonably-priced wedding option — weddings onboard start at $3,000 for up to eight guests (plus the cost of the cruise, of course). Each additional guest is $20 (since they, too, have paid for the cruise) and marrying on the cruise line’s private island is an extra $1,000 site fee.

These packages may make it sound like Disney is cranking out cookie-cutter weddings when, in reality, the company works hard to cater to each individual couple’s fantasies, from fireworks to a caricature artist, an a capella performance, white ponies or wedding party photos that include Mickey and Minnie Mouse. If you can imagine it and pay for it, Disney will help you make it happen.

It’s apparently a very tempting proposition: a whopping 1,200 couples per year hold their weddings at Walt Disney World Resort alone. Some 4,000 Disney weddings take place worldwide, and there’s a TV show on Freeform about Disney weddings and at least one dedicated podcast. Couples tend to use their favorite music from Disney films in their ceremonies or as their entrance music for a reception, festoon their white wedding cakes with Cinderella’s Castle toppers, and give away mouse ear favors. Of course, we’ve seen plenty of fairy princess-inspired dresses and tiara-topped heads, though how “Disney-fied” a couple makes their happily-ever-after moment is certainly up to them.

So, how can you get your dream wedding in paradise for less? Pay for it with the Disney Premier Visa card from Chase, and you get six months of free financing (then a 15.99% variable APR applies). Plus, the card offers additional perks, such as special character meet-and-greets, discounts on food and beverages in the parks, and (for new cardholders) the current sign-up offer is a $250 statement credit when you spend $500 in the first three months. Other deals include 20% off spa treatments on the Disney Cruise Line ships and (for a limited time) — perfect for pre-wedding relaxation — a room rate sale that offers four nights at the Aulani resort for the price of three.

The Disney Premier Visa card is really only a great fit for folks who plan to take more Disney trips. If that's not in the cards after your dream wedding, you might consider a different credit card. Two cards that might be high on your list for that honeymoon after your Disney dream wedding are cards that earn bonus points in the travel category, such as 3 points per dollar via the Chase Sapphire Reserve or 2 points per dollar with the Chase Sapphire Preferred Card.

Featured image by Freeform via Getty Images
Editorial disclaimer: Opinions expressed here are the author’s alone, not those of any bank, credit card issuer, airline or hotel chain, and have not been reviewed, approved or otherwise endorsed by any of these entities.