Get Account Alerts Directly to This New 'Smart' Credit Card 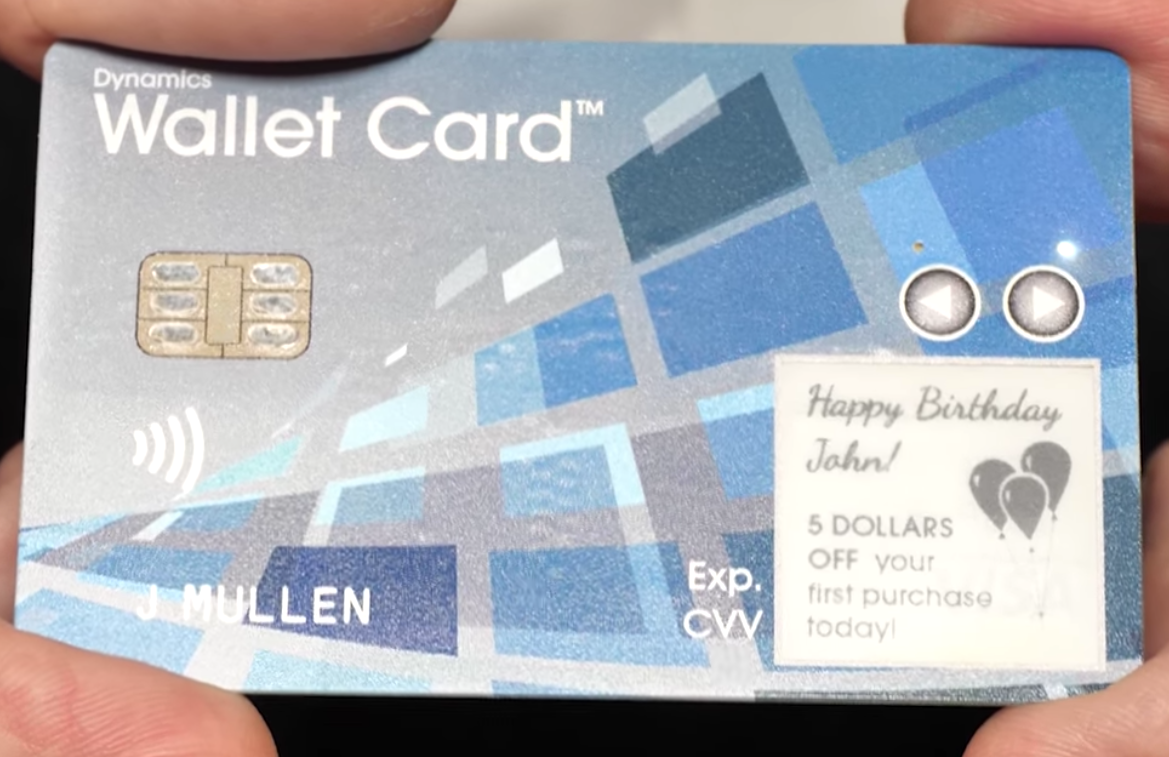 Get Account Alerts Directly to This New 'Smart' Credit Card
This post contains references to products from one or more of our advertisers. We may receive compensation when you click on links to those products. Terms apply to the offers listed on this page. For an explanation of our Advertising Policy, visit this page.

Dynamics Inc., first announced the Wallet Card back in January, and it was billed as the world's first "smart" credit card. Now the company is detailing some new features that will be part of the card when it debuts later this year.

The biggest update is the two-way communication that Wallet Card will facilitate, so banks and customers can communicate in real time via the card. Instead of having to log into your bank's app or wait for a customer service agent to ring you up regarding a fraud issue, a message will be pushed to your card asking if you made the suspicious transaction.

If there was in fact fraud on your card, the bank could cancel the card number and send a new account number straight to the card. No more waiting a week to receive a replacement in the mail.

Dynamics CEO Jeffrey Mullen spoke to TPG about some of the changes we'll see over the coming months.

Banks will be able to offer things like immediate credit limit increases, all communicated through the card's built-in screen. Customers can respond immediately, and that message will be relayed to the banks.

On top of that, Wallet Card's technology will even allow banks to offer upgrades to your card. Say you have the Chase Sapphire Preferred Card, Chase could offer to upgrade you to the Sapphire Reserve — all from card itself.

If you're pre-approved for a new credit card, a message could be sent to Wallet Card, and you could sign up for a new account without even filling out an application. Your new account information would be downloaded, and you'd be able to use it immediately.

Mullen said that because banks can track your spending, they'd be able to offer you better cards right on the spot. For example, if they see you're spending a lot on gas, they could ask, via Wallet Card, if you want to apply for a card that earns bonus points on gas purchases.

Initial pictures of the card showed a small screen, about an inch by an inch, but that display will grow.

"The final model is a little more enhanced than the model we have...the display will be made bigger and bigger," Mullen said. Although this video is in German, you can get an idea of how the screen works and how it can change between accounts with the click of a button, starting at 00:17:

Wallet Card has the potential to provide value for consumers in other ways, too, like in the form of on-demand coupons. Banks would allow cardholders to opt-in to receive coupons, and banks could send them to Wallet Card based on purchase history. Say you just put your credit card down at a hotel in downtown New York, a bank would recognize that transaction and send coupons or special offers directly to your card.

Right now, only foreign banks are signed up to offer Wallet Card, including Canada’s CIBC and Emirates NBD. Fortunately for US-based consumers, Mullen said that Dynamics is "moving forward with a number of US-based banks, and those announcements will be made later this year. " The recent implementation of EMV chip readers has slowed down lots of banks from updating their credit card technology, Mullen added.

Dynamics will be introducing additional layers of functionality over the next four months to the latest Wallet Card. Mullen couldn't give a specific launch date for the card, but he did say that the date was set, and that it will be released in the later part of 2018.