5 ways Capital One Venture is winning the credit card game

Articles
Ariana Arghandewal has been writing about points and miles for almost a decade. She previously served as editor at FlyerTalk, Frugal Travel Guy and NerdWallet while running her own travel blog, PointChaser.
Follow
May 26, 2021
•
9 min read 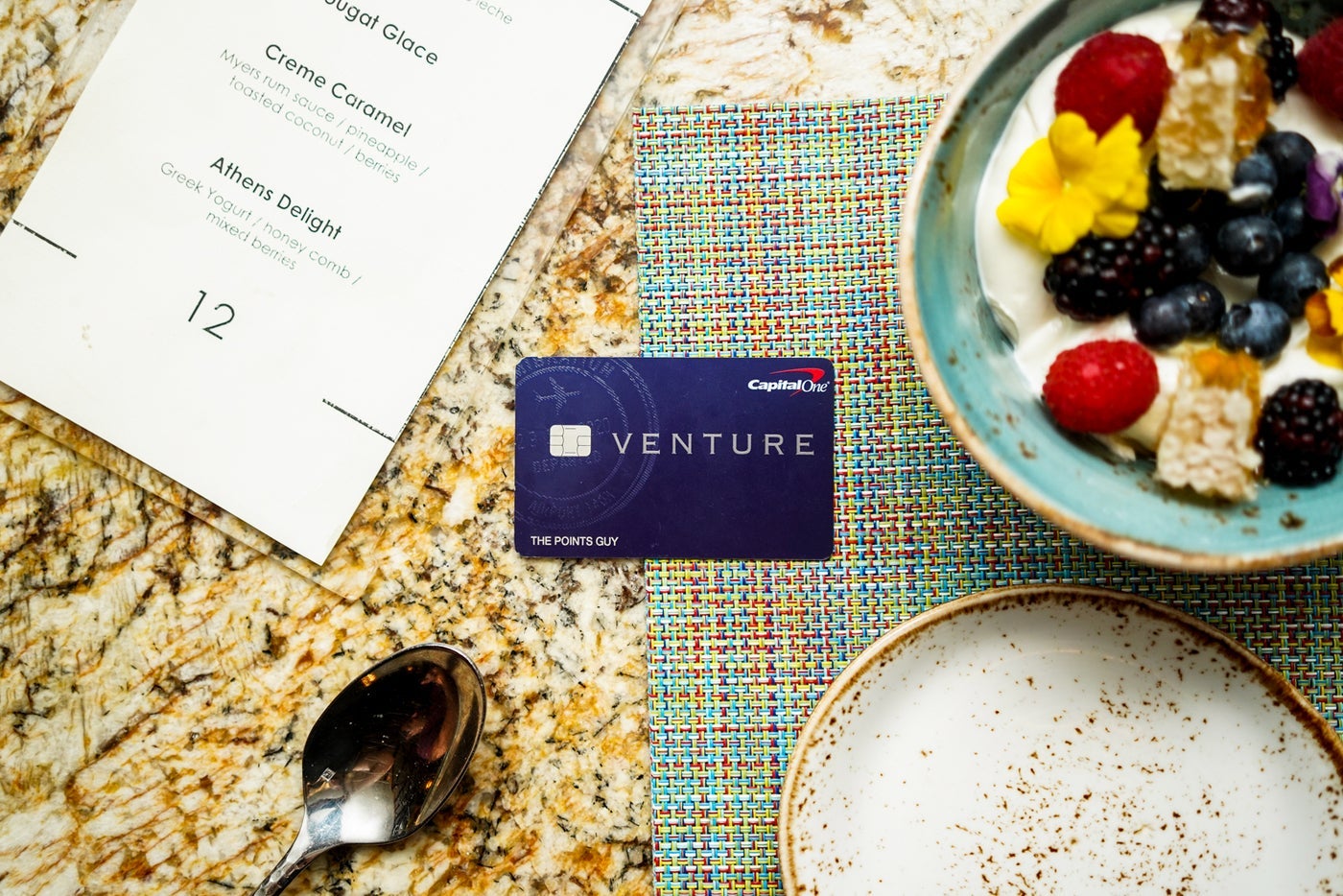 Want more credit card news and travel advice from TPG? Sign up for our daily newsletter.

There's only one (key) difference: The Capital One Venture is a mid-tier card with a $95 annual fee and a sign-up bonus that, until recently, was essentially useful for cash-equivalent travel credits.

While Capital One did introduce airline and hotel transfer partners over the last few years, the ratio for most of them was 2:1.5. That's lower than the typical 1:1 ratio you can expect with programs like Chase Ultimate Rewards, Citi ThankYou Rewards and American Express Membership Rewards. This made Capital One miles less valuable than their competitors.

That gap has now narrowed significantly, as Capital One just implemented a series of changes that will not only improve its rewards program but turn the Capital One Venture into a serious competitor in the premium card market.

When Capital One introduced airline transfer partners in 2018, it was a welcome addition to a product that was largely seen as a 2% cash-back card with an annual fee. Some travelers felt uneasy paying a $95 annual fee for this card, considering there were no-annual-fee alternatives like the Citi® Double Cash Card. But then Capital One stepped things up, expanding its transfer options with hotel partners and improved ratios for JetBlue transfers.

However, those updates pale in comparison to the newest announcement.

In April, we learned about four new transfer partners (British Airways, Turkish Airlines, TAP Portugal and Choice Hotels) along with the addition of 1:1 transfers for select partners — and both are pretty significant. Turkish Airlines has one of the most undervalued rewards programs out there, offering multiple sweet spots that require significantly fewer miles than mainstream loyalty programs (i.e., round-trip from the mainland U.S. to Hawaii for 15,000 miles). Prior to the new Capital One partnership, the only way to earn Turkish miles was via Citi ThankYou and Marriott Bonvoy transfers, so this is a pretty big win.

Now, Capital One has 16 airline and three hotel partners, numbers that exceed those offered by Chase and Citi. That's pretty substantial for a program that launched transfer partners less than three years ago. The nice thing is that not all partners overlap with popular rewards programs. For example, Capital One's inclusion of Choice Privileges and Wyndham Rewards opens up thousands of low-level award redemptions for budget travelers who don't want two more cobranded hotel cards in their wallets.

Related: Your ultimate guide to the 19 Capital One transfer partners

While the quality of Capital One's transfer partnerships is worth mentioning, even more newsworthy is that nine of them fall into the 1:1 tier:

This is a substantial upgrade for a card that earns 2 miles per $1 spent. Just imagine how much closer you'll be to those Etihad and Avianca sweet spot awards. For example, Etihad requires just 22,000 miles each way for an economy-class ticket between New York and Morocco (American Airlines requires 30,000 miles for the same award). Not only can you book this ticket for over 25% less through Etihad, but you'll also acquire these miles at a faster rate since the Capital One Venture Rewards Credit Card earns 2x on all spending.

Meanwhile, Avianca LifeMiles are great for premium-cabin awards without pesky fuel surcharges. This can save you hundreds of dollars on award redemptions with airlines like Lufthansa, which also happens to offer some of the best business- and first-class products in the sky. Being able to book these awards without fuel surcharges (and earning the miles required at a rate of 2x) is a hugely positive development.

Both the quality of 1:1 transfer partners and the fact that you'll be earning 2x on all spending with the Venture card can't be understated. The Venture card has always been a good option for people with limited spending power, but this development makes it even more of an excellent return on spending.

While Etihad and Avianca have been Capital One transfer partners for a while, the improved transfer ratio is a nice bonus. We've even bumped up the value of Capital One miles from 1.4 cents to 1.7 cents in our latest TPG valuations.

Let's face it: Most loyalty programs are complicated. Trying to figure out which one is best for you and which credit card(s) to get can make your head spin. Capital One has always simplified its reward structure by offering a fixed earning rate on all purchases and a fixed rate on award redemptions.

The introduction of transfer partnerships has made the program more appealing to seasoned pros. But for those who don't want to learn the ins and outs of a dozen different frequent flyer programs, Capital One remains an appealing choice.

Related: Six reasons to get the Capital One Venture Rewards card

The Capital One Venture Rewards Credit Card has always punched above its weight in terms of premium card benefits. Most cards with $95 annual fees don't offer anything in the way of travel benefits, but the Venture card offers a Global Entry fee credit every four years (worth up to $100) and secondary rental car coverage. Benefits only available to accounts approved for the Visa Signature card. Terms apply.

And while Citi has removed travel and purchase protections from its rewards credit cards, Capital One continues to offer extended warranty and travel accident insurance to select cardholders.

But the newest announcement includes yet another premium benefit on the way.

American Express has its own network of upscale Centurion Lounges reserved for premium cardholders. It makes sense as a premium card benefit. Now Capital One is following suit with its own lounge plans.

The first Capital One airport lounge will be unveiled this summer at Dallas-Forth Worth International Airport (DFW). The lounge will be located in Amex's territory and will offer premium amenities. While the access policy has not been announced, Capital One will be open to business and family travelers, charging "special entry rates depending on their card."

The amenities offered at the Capital One lounge are set to rival those of American Express, with premium dining, gym equipment, a yoga studio and shower facilities. While day pass rates haven't been shared yet, it wouldn't surprise me if Capital One cardholders will receive either discounts or a certain number of free passes annually.

After all, Capital One took a page out of the United Explorer Card's book by adding a Global Entry fee credit to the Venture card despite only charging a $95 annual fee. The Explorer card comes with two annual, one-time United Club passes, so I wouldn't be surprised to see Capital One following suit with a similar benefit.

Related: Six ways to get $1,700-plus in value* from the Capital One Venture bonus

In less than three years, the Capital One Venture Rewards Credit Card went from being "just another 2%-back card" to competing with the more established players in the loyalty program realm. Not only is the card offering premium-like benefits, but the program's inclusion of new travel partners (some of them with 1:1 transfers) has made Capital One miles much more valuable. Now, cardholders can more easily use their miles for more premium award redemptions.

The announcement of a new lounge network accessible to Capital One cardholders is especially game-changing because the issuer is now directly competing with American Express in a premium travel category. We'll get a better sense of where Capital One's lounge network is headed when the first one opens at DFW this summer. But the lounge market is ripe for competition, and Capital One's entry will no doubt shake things up.

This combination of solid value, notable simplicity and premium perks (all for a low annual fee) has made the Capital One Venture card one of the most appealing products out there — and one that may deserve a front spot in your wallet.

*Based on TPG valuation and not provided by the issuer

Featured image by (Photo by The Points Guy)
Editorial disclaimer: Opinions expressed here are the author’s alone, not those of any bank, credit card issuer, airline or hotel chain, and have not been reviewed, approved or otherwise endorsed by any of these entities.