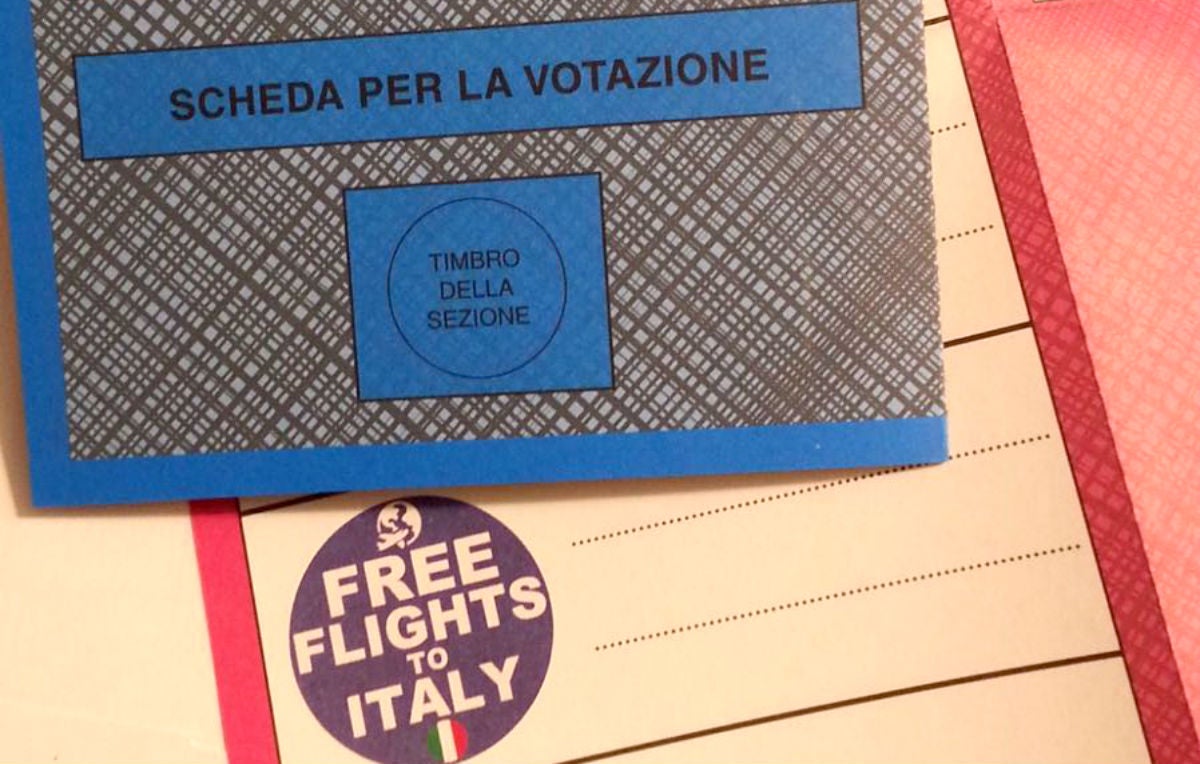 The Incredible Fraud Offering Free Flights to Italy
This post contains references to products from one or more of our advertisers. We may receive compensation when you click on links to those products. Terms apply to the offers listed on this page. For an explanation of our Advertising Policy, visit this page.

Imagine going to vote in your country's general election, and finding a party on the ballot making you a very simple promise: Free international flights. Period. That would defy reason — but that's exactly what happened to Italian voters.

Italians are not easily surprised when it comes to their country’s famously bizarre politics. But even the most seasoned observers were baffled earlier this month, when Italian voters in the North American voting district received their absentee ballots for the upcoming election on Sunday. On the ballot for the House, one of the party symbols proclaimed in all caps: FREE FLIGHTS TO ITALY.

If you think that sounds more like a cheeky ad campaign from Ryanair than a political party, you're right. But it's there on the ballot, complete with the names of its candidates — two complete unknowns, running on the single issue of free airplane tickets to Italy.

The party's site made it seem simple. Fly to Italy, show your receipts, get a refund. Any class of service, even business, so long as the fare was not more than the lowest found on Google Flights for the dates of your travel. (People would have to include screenshots.)

Great — but there's a small problem. The party is a fraud, which somehow managed to meet the legal requirements needed to file for inclusion on the ballot, and sneak past the authorities. The site is now offline.

Free Flights to Italy was totally unheard of until people began tweeting pictures of the ballot. The party, led by its only two candidates, Giuseppe "Joe" Macario and Bettina Anna Maria Borrelli, appeared to be a Rome-based organization with no agenda other than supporting Italians abroad by offering them free flights to Italy.

It wasn't really clear whether one could email for refund rather than trek to an office in Rome, and the catch was that you had to be an Italian citizen officially registered with authorities as living abroad. Nobody had any clue either where the money, hundreds of millions of euros a year at even the most conservative count, would come from. No journalist has ever met Macario or Borrelli, who later turned out to actually be his mother.

Free Flights to Italy has not been formally excluded from the election. Despite being an actual scam, people can still vote for them; the last day to turn in one's ballot at the nearest Italian consulate or embassy is Thursday, March 1. That could be a lot of votes, considering there are almost five million Italians registered abroad, two million of whom in the Americas, according to official statistics from 2015.

One of them has tried to get a refund from Free Flights to Italy. It was a disaster.

Davide Bianculli, an Italian mechanical engineer who has been living and working in Berkeley, California, for the past five years, said he was intrigued by the promise and got in touch with Free Flights to Italy on February 15th. "I understand that I need to book a flight, take a screenshot from Google Flights, keep the boarding pass and ask for a reimbursement once I'm in Italy," he wrote to the party's email address in a message seen by TPG. "Is that it?"

Free Flights responded with a barely coherent message, appearing to state that it would submit receipts for refund from the government three times a year. After not hearing from them again, Bianculli emailed a second time, so far without a reply. "You don’t need to be a genius to understand that this is a big scam," he said.

That's pretty much the same conclusion a journalist from the Italian-language edition of Rolling Stone magazine reached in a story published on February 20th. The Free Flights to Italy site went offline shortly after the story was published. Rolling Stone couldn't find any other trace of Free Flights to Italy, beyond an amateurish YouTube video featuring Macario’s purported voice and describing the party as a "non-governmental organization." There's also a sort of blog, still available online, in which Macario describes himself as a computer genius.

His credentials are as improbable as his free-travel offer. The 36-year old promotes himself on his blog as one of Italy’s biggest experts in virtual reality, claims to be a university professor in the US, and a holder of degrees from Princeton University and MIT. He is also, according to himself, the first and only Italian programmer to ever have broken two world records at the ACM International Collegiate Programming Contest.

And there's worse. Macario has been accused of cyberstalking by several people quoted by Rolling Stone. A US woman, who requested anonymity to protect herself from retaliation by Macario, told TPG that he "has been at this since 2015 harassing and defaming many people. I am in contact with four other female victims."

His victims — mainly universities, professors and students, many of whom are women — claim that Macario has created webpages full of defamatory content linked to their names, so that these would rank high in search-engine results. Some of those people have gathered, again anonymously because of the fear of retaliation, to create a website denouncing Macario.

To top it all off, Italian media reported on Wednesday that the state prosecutor's office in Rome has opened a fraud investigation into Free Flights to Italy, because the party may have falsified the 500 signatures needed to appear on the ballot. It also likely forged the signature of the Rome attorney who purportedly certified those signatures, Luigi D’Alessandro, who denied having ever met Macario and has sued him.

As for Macario's real identity, he appears to be a resident of a small town near Rome, Fiano Romano, who has no political experience, but may be very good at using the Internet.

But what is truly unbelievable is that his so-called party could actually make it on the ballot. How did this happen?

We emailed the Italian Ministry of the Interior, asking how a fake political party headed by someone whose false credentials would be easily debunked could be seen as having the necessary requirements to run in a national election.

The press office emailed back a copy-paste of the regulations — the very regulations that would have made it easy to spot the fraud. We sent another email stating that a simple Google search was sufficient to discover that Macario had been accused of cyberstalking and defamation, and asking whether any background checks were performed. We have not received an answer as of the time of this publication.