11 Quirky American Festivals to Experience in 2018 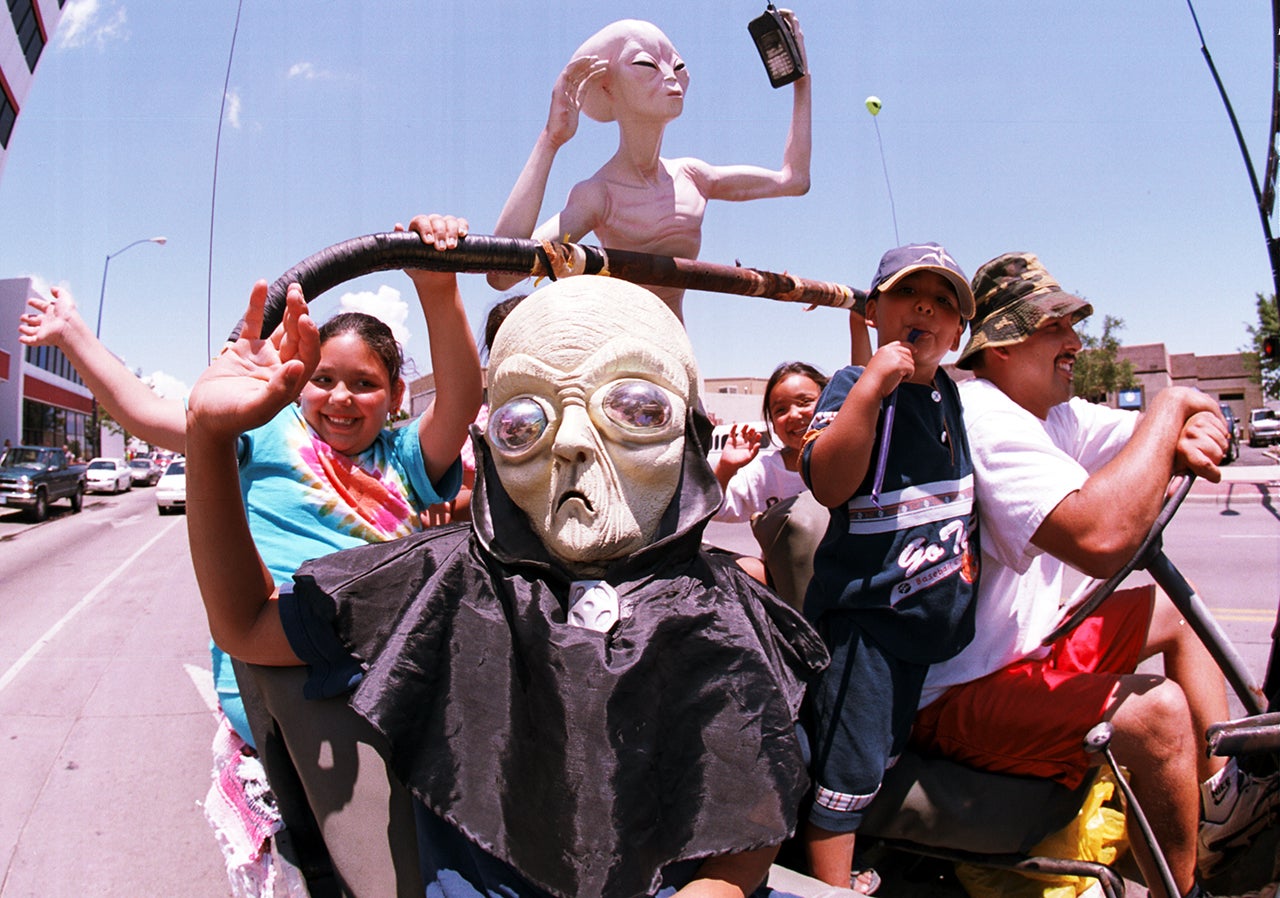 In America, our diversity is evident in the way we celebrate our unique passions. In these 11 festivals around the country, people gather to honor the wacky and the wonderful. From rolling in grits and running away from roller derby girls, to floats praising duct tape, fungus and aliens, there’s a fascinating event happening every month.

St. George, SC is considered the world capital of grits and rightfully so. The population consumes more grits per capita than anywhere else. At the 33rd Annual World Grits Festival, endless fun awaits if you love warm, cheesy goodness. There’ll be a grits-eating contest, the popular “Rolling in the Grits,” corn shelling and live music. Those wanting to burn some calories beforehand can join the early morning 5K race. This event takes place April 13 - 15.

A cow chip is a frisbee-shaped dried piece of cow dung, approximately six inches in diameter and the center of attention at the annual World Cow Chip Throwing Championship in Beaver, OK. People attempt to break the record of hurling cow chips set 30 years ago: 185 feet. You don’t need Olympic skills, but if you’re good at softball or playing catch with your dog, try your luck at this unusual festival where the motto is, “When the chips are down, pick ’em up and throw ’em!" During the weeklong festivities, enjoy arts and crafts shows, chili cook-offs, a carnival and a talent show, until the chip throwing event on Saturday. This event takes place April 14 - 21.

This Memorial Day, take a break from the BBQ to consume a fruit rich in antioxidants and Vitamin C. At the 35th annual Pungo Strawberry Festival in Virginia Beach, VA, more than a hundred thousand people celebrate strawberries and consume them in more than 50 different ways. Savor this sweet berry in shortcakes, smoothies, pies or even right off the vine. If that’s not enough, kick-start summer with a parade, carnival rides, a pie-eating contest, shopping and live music. This event takes place May 26 - 27.

In the small town of Logan, OH, washboards are still being made at the Columbus Washboard Company. While washing machines have mostly replaced these boards, they still have a strong hold in people’s hearts, and are used in vintage decor and played as musical instruments. At the Washboard Music Festival, downtown Logan comes alive with live music that incorporates toe-tapping rhythms from the washboard by local and regional artists, from bluegrass and jazz to Cajun Zydeco. This event takes place June 14 - 16.

What’s the difference between duck and duct tape? During World War II, the military needed waterproof tape for ammunition cases and enlisted Johnson & Johnson’s Permacel Division. It was called duck tape because water would just drip off it like a duck’s back. The tape became so popular that it was used for all types of sealing, including heating and cooling ducts, thus giving it another name. In Avon, OH, the birthplace of this miracle tape, fans unite during Father’s Day weekend to celebrate at the Heritage Duck Tape Festival with floats, sticky fashions and sculptures made of duck tape. This event takes place June 14 - 16.

Join the biggest party for the paranormal at the UFO Festival in Roswell, NM, where thousands of people dressed as aliens partake in a parade of otherworldly proportions. Halloween is months away, but the costumed fun has no limits at the festival, with its bizarre art, surreal street performances and an extraterrestrial costume contest for humans and pets. Last year, the festival had 38,000 “aliens” participate, and this year promises to be bigger and bolder. This event takes place July 6 - 8.

The San Fermin en Nueva Orleans occurs at the same time as the Running of the Bulls in Pamplona, Spain — but with a twist. Participants are chased through the streets of Nola by roller derby athletes from the Big Easy Rollergirls team dressed as bulls. If you’re caught, the girls whack you with a foam wiffle ball bat. Of course, there’s a party before and after with sangria, Spanish wine and tapas. This event takes place July 13 - 15.

No one likes getting bitten by mosquitos, but Texans jokingly refer to it as the state bird. They’re so fond of the critter that they celebrate it at the Mosquito Festival in the muggy town of Clute, even going so far as hosting a mosquito calling contest and a Mosquito Chase 5K. There’s a giant blow-up bloodsucker mascot, named Willie-Man-Chew, greeting festival goers. There’s also a BBQ and fajita cook-off, a horseshoe tournament and the popular Mr. and Mrs. Mosquito Legs contest (the skinniest wins!). This event takes place July 26 - 28.

The town of Crystal Falls, MI, is home to the Humungous Fungus, a 38-acre honey mushroom. This is the largest organism in the world, having lived underground for more than 1,500 years. Although the mushroom is larger than a blue whale, it’s not much of a tourist attraction. Naturally, the town decided to celebrate it with a parade, pancake breakfast, softball tournaments and the largest mushroom pizza (10 feet x 10 feet) you’ve ever seen. The biggest draw is the Mr. Fungi Beardy Pageant, so start grooming that facial hair. No date is set for this (yet); check here for updates.

Sasquatch and Nessie, meet the Mothman. With glowing red eyes and giant wings, this monster has supposedly been roaming the nights in Point Pleasant, WV, since the '60s. To honor this supernatural being, the town celebrates every third weekend in September with a festival. At the Mothman Festival, pose with the town’s version of the Mothman, check out the Mothman pageants and learn everything you need to know about him at the eponymous museum. This event takes place September 15-16.

There may not be a yellow brick road leading you to the 33rd Annual Scarecrow Festival, but there will be more than 100 handcrafted and mechanical scarecrows awaiting you. At this atypical event in St. Charles, IL, learn how to craft a creative, colorful scarecrow, bring your kids to the petting zoo, enjoy live entertainment and vote for your favorites in the scarecrow competition. This event takes place October 5-7.

Related stories
Save money with these travel-related offers on your credit cards this month
Use these shopping portal bonuses to earn extra miles this holiday season
Using miles and points to book airline tickets and hotels for others
Maui magnificence: A review of Kaanapali Alii, a Destination by Hyatt Residence
Featured image by Groups dressed as aliens ride through downtown Roswell, New Mexicoas they participate in the annual UFO Encounter/ The annual festival stems from a mysterious crash northwest of Roswell in 1947. The Army initially said it was a UFO crash, but quickly backed off that report. The Pentagon has since said it was a top-secret balloon crash, but UFO enthusiasts don''t believe that story, which gives rise to what has become known as the 'Roswell Incident'. (Photo by Joe Raedle/Newsmakers)