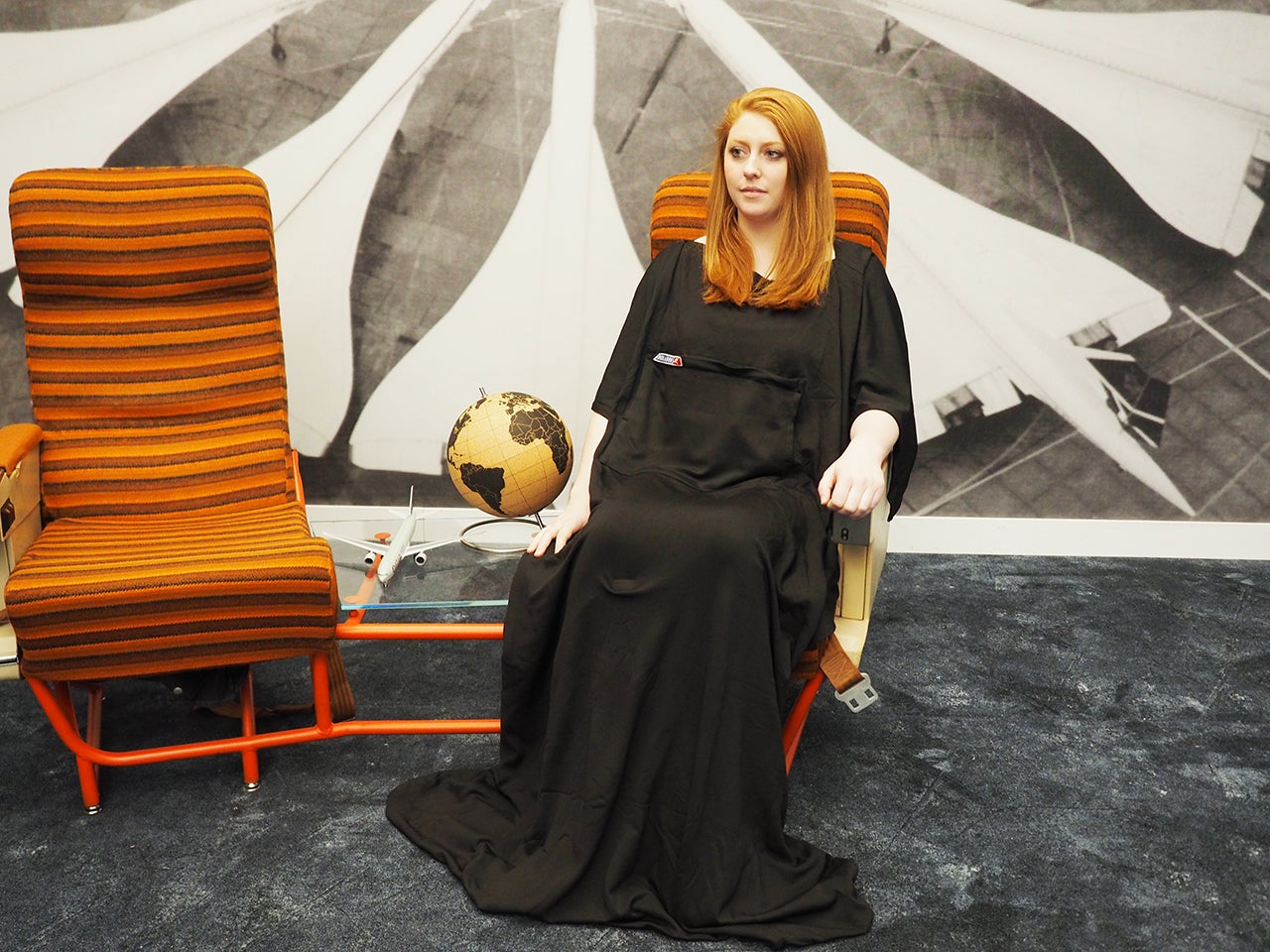 One of the craziest looking travel products to emerge recently was the Loungaroo, a versatile travel blanket that launched via Kickstarter. When I saw I could get one for just $40, I figured at worst it could be a fun gag gift. The Loungaroo met its Kickstarter goal — albeit barely — back in November 2016 and the long manufacturing process began. Finally, in January 2018, I got a package in the mail. One of the first Loungaroos ever manufactured had arrived; in fact, I was shipment #25.

We (my wife, Katie, and I) put the blanket to work immediately on a couple long economy mileage runs from New York City to Beijing, China; here are our findings. Note: While I purchased one Loungaroo through Kickstarter, the company sent a second Loungaroo to the TPG studio for photo purposes. The photos of the grey product are from the field, and photos of the black version are from the studio.

The Loungaroo was designed to be versatile. The blanket stores wrapped into itself, forming a large travel pillow about the size of an airplane tray table. There was a flexible strap on the top which served as a headband to keep the pillow in place and/or as an eye mask.

While the bundle could be used as a pillow on its own, the real use of the Loungaroo was as a blanket. To get an idea of what it looked like, imagine a slit in the upper part of a blanket that allows you to put your head through it. This slit was designed to let the Loungaroo hang in place while sleeping upright on a flight. The material above and below the slit balanced the weight of the blanket so it didn't pull on the neck when worn.

The Loungaroo weighs a hefty 2 pounds, 10.8 ounces and comes in one size, which according to their Kickstarter site, fits those who measure up at 6' 4" — due to the stretchiness of the material. In the middle of the blanket, there was a kangaroo pocket for a cell phone, passport or anything else that we'd want to keep on our body. This reversible pocket was what the blanket packed into for storage.

There was a small slit around the pocket perfect for a headphones cord, which would enable someone to store a portable music device or phone while still getting to listen to tunes. Just under that pocket was a sleeve for hands — nice for keeping tabs on valuables. But, we found that it was more comfortable to just keep our arms under the blanket.

Further down, there was a pouch for our feet. This pouch was perfect for those who want to take their shoes off during flight and still keep their feet warm — and off the airplane floor. Also, we found that there was a soothing mental aspect to sliding our feet into this pouch, as if we were sliding under sheets of a bed.

When packed away into itself, there was a hook that carabiner-clipped the Loungaroo to a pack. While the sewing seemed sturdy, this hook looked like it would probably give out with repeated use.m

On the first flight from Vancouver to Beijing, we lucked out getting entire four-seat rows to ourselves, allowing us to lie-flat in "poor man's business class." At first, I tried to wear it as intended: with my head through the neck slit and feet in the pouch. While this was possible lying flat, the material was stretched in this position, uncomfortably pulling on my neck. I found the simple solution was to take my head out of the neck slit and lay the top of the blanket over my face, effectively blocking the light. I slept well, with my FitBit recording over seven hours of sound sleep.

However, the real test was seeing how it did while sleeping upright — how it was designed to be used. There, the Loungaroo excelled. The blanket was wide enough to wrap around me, both keeping me warm and giving a cocoon-like feeling from the soft, stretchy material.

The foot pocket helped make me feel like I was getting under bedsheets instead of just a blanket. And, the hood was effective for blocking out the light and giving the illusion that there weren't hundreds of people sardined into the plane around me.

Some downsides that Katie and I found from testing: If you're hoping to keep your hands warm, you've got to expose your arms to the cold by reaching them around the blanket to get to the hand pocket. We mostly just kept our hands inside the blanket; it would be nice to have the hand pockets sewn inside.

The other downside was obvious: It looked silly.

Was it comfortable? Very. The soft material made it a dream to wear. The Loungaroo was wide enough to wrap around, enveloping us in a warm, soft material.

Was it bulky? Yes. While the Loungaroo was well-designed to wrap up into itself, the dense package was still the size of a small pillow. That's a lot of real estate to give up in a carry-on bag. Also, it was not light.

Did it look ridiculous? No doubt. When I first tried it on a flight, I was pretty self-conscious about how silly it looked. And that's before putting on the even more ridiculous looking hood. Of course, a benefit of the hood was that you can't see the stares from your fellow travelers.

Would I carry it with me on future travels? The verdict is still out. The Loungaroo was really comfortable and certainly made a case for itself. However, my carry-on backpack is tapped out of space, meaning I would need to change up my packing system or use the exterior band to strap the Loungaroo to my backpack.

If you're interested in buying a Loungaroo, they are available online for $59 each. Loungaroo has generously offered TPG readers a 10% discount code: TPGLOUNGE and note: This isn't an affiliate code; the creator is just a fan of TPG.