Articles
Katherine Fan is a former senior travel features reporter at The Points Guy who covered everything from personal finance to travel and aviation.
March 14, 2018
•
7 min read 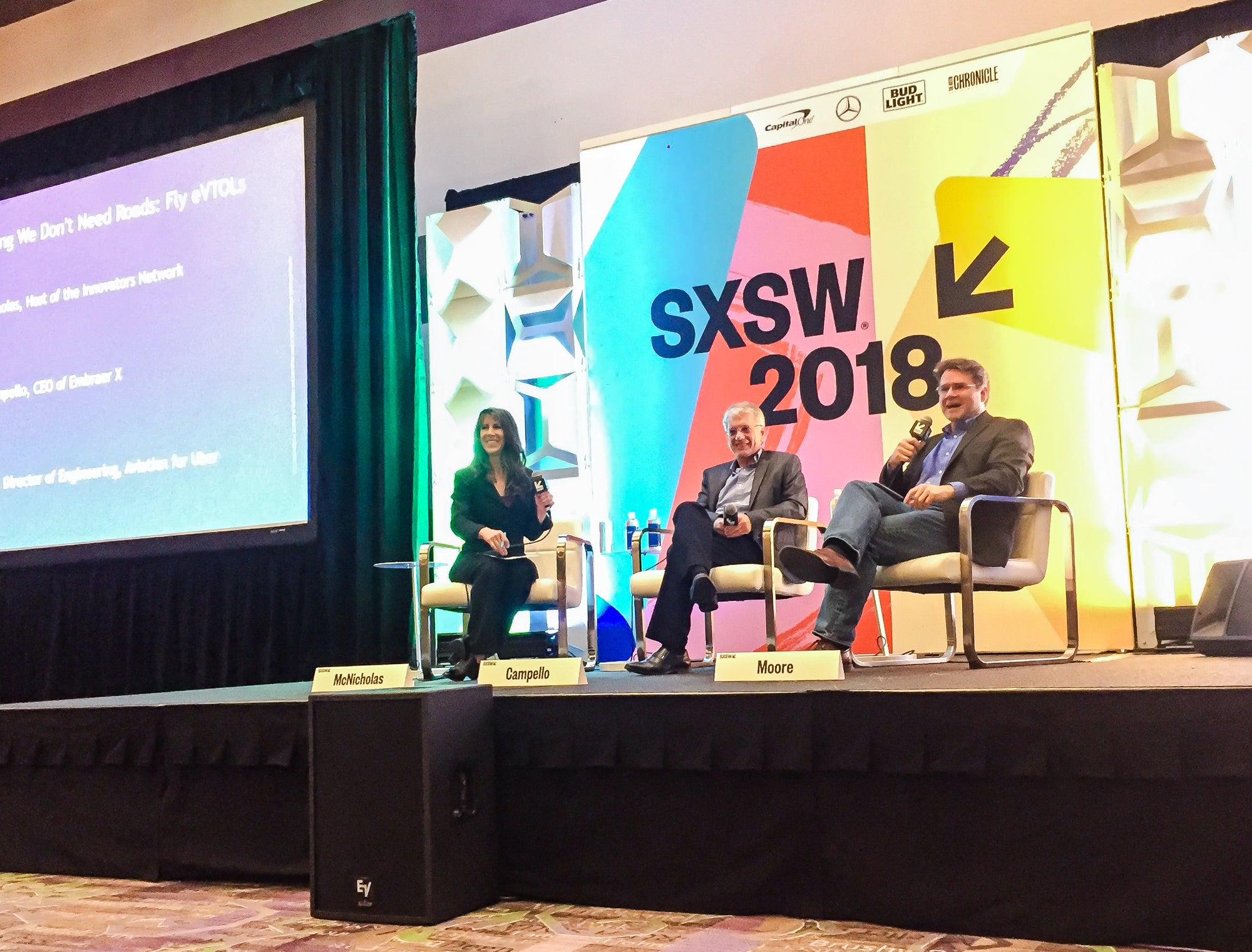 Embraer, Uber Discuss Autonomous Flying Rideshares at SXSW
This post contains references to products from one or more of our advertisers. We may receive compensation when you click on links to those products. Terms apply to the offers listed on this page. For an explanation of our Advertising Policy, visit this page.

Embraer's Director of Innovation Antonio Campello and Uber's Director of Engineering & Aviation Mark Moore discussed the companies' collaborative vision for the future with Kym McNicholas, host of The Innovators' Network.

"We're... expediting the ecosystem [of autonomous transport] right now," Campello said. "It's about the entire supply chain — all the real estate companies, the FAA, everyone. A great market strategy combines all the different voices that are present: technical, user voice, but also the regulatory voice. You gotta combine the strategy for all of them to sing in unison to achieve great vision."

Uber, which also hopes to position itself at the forefront of autonomous road vehicle technology, will hire commercially-rated helicopter pilots for the first several years of the program, until the company is confident that its software algorithm can handle any contingency. "Embraer has an incredible track record of building safe vehicles," said Moore. The companies are hoping to combine their skill sets "with opportunities for all in this new, Wild, Wild West."

In order for what's been dubbed "Uber Elevate" to be successful, Moore said, the aircraft must be community-friendly, efficient, safe and affordable: "For it to be accepted, it's gotta be a good neighbor — meeting your needs and the community around you."

What You Need To Know

The companies in partnership chose Dallas as their first market because the region offered the best first opportunity to work with NASA, FAA and the airport to pioneer exactly how this should be, Moore said. "We already know from [market research] that 30% of local Dallas residents want to go to DFW for this new service. What's really cool is that the two runways at DFW are 1.5 miles apart, and the terminals are in between the runways, so [Uber Elevate passengers] land right at the terminals for the best user experience."

"DFW [Airport] is one of the best moving forward with new technology," Moore said, "and this is such a great opportunity [to work with the] best possible partners."

Ross Perot's company, Hillwood Properties, is designing Skyports for the initial batch of eVTOLs in Dallas. Before that happens, Uber will install acoustic measuring devices in the neighborhood that will be left in place for a full year. "Embraer will actually design our vehicles for the spectral characteristics," Moore said. "They'll actually be able to mask [the vehicles' sound] signature into the background noise of these areas for the potential Skyports, doing everything they can to be the best neighbors they can."

Campello added, "We're talking about bringing the Internet of Things to an Internet of Physical Things, connecting the traffic in a way that people can go everywhere, anytime, on demand. Of course this is not today — it's in the future — but we're working very hard to get there."

Asked what the software would look like in terms of the user experience, Moore said that the rideshare giant anticipates adding Uber Elevate directly into the app. "On the far-most, you'll see UberAir for a complete multi-modal transportation experience," he said. "An Uber will take you from your home to the closest Skyport, where you will be pooling with several other individuals." The idea is to share the ride and the cost of that trip with the other airborne passengers, with another Uber taking travelers to their final destinations. Just as when the automobile was introduced, "this technology will provide completely new solutions to where people want to live, work and play," Moore said.

"I know some of you are thinking, 'How can this be affordable?,'" Moore said. "This is the key difference to realize: Every UberX on the ground that's stuck on the traffic grid during peak hours [travels] at an average speed of 25 mph. eVTOLs have an average of 150 mph — 6x productivity. And by also pooling, UberAir will be able to get 3.5 paying passengers into each vehicle instead of just one person being in an UberX. Combined with that speed and the load factor, that's a 20x difference. So for every UberX with one person in it, the VTOLs are 20x more productive, and that's why the economics make sense."

Both Moore and Campello agreed that the biggest hurdle will be that the FAA has to be on board. Campello stressed Embraer's history of safe aviation technology, saying that "It's not just about the aircraft. The suppliers, supply chain, everyone, all partners must be working together. The more we work together, the better we can do."
Campello invited interested audience members to go to EmbraerX.com and leave their feedback: "The more we can perceive what people want, the better the design will be. We want to do something that is truly designed for the people, truly affordable, and that may cause a difference. We are very conscious about everything that we have to do."

"Just a few companies in aviation have survived the last 50 years, and [Embraer is] one of them, so we know how difficult it is. It's a new way of transporting people everywhere. The point is that we are developing a new ecosystem."

Related stories
Maximize your Cyber Monday shopping with these 10 credit cards
8 best drinks to order with a cruise ship beverage package (and 3 to avoid)
Should you do a mattress run for hotel points or elite nights?
This might be the best Amex card combo: Amex Gold and Amex Business Platinum