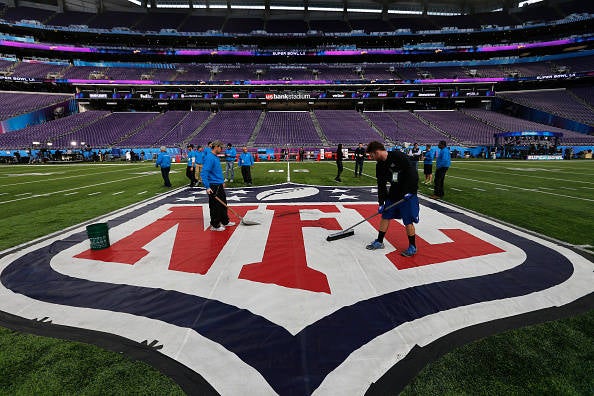 Travel Brands Usually Skip the Super Bowl. Here’s Why.
This post contains references to products from one or more of our advertisers. We may receive compensation when you click on links to those products. Terms apply to the offers listed on this page. For an explanation of our Advertising Policy, visit this page.

There’s only one solitary ad in the travel category confirmed to screen during commercial breaks at this year’s Super Bowl: A 30-second spot from Universal Parks & Resorts in which an energetic Peyton Manning steps into the role of “vacation quarterback," guiding families toward the best getaway possible.

It’s hardly a step up for the travel space from last year’s game, which was not much more robust with a paltry two ads from Airbnb and Turkish Airlines. In a landscape where 50 or so brands run roughly 60 spots, you don’t have to be a math whiz to understand that travel and the Super Bowl don’t seem to mix.

“It is just not as heavy a category as autos or beverages or consumer packaged goods,” AdAge media reporter Jeanine Poggi told TPG. There’s reliably one or two travel-focused ads a year, she continued, but it seems there might be less of an incentive for travel brands to take the financial risk. “You have a lot of auto brands, because a lot of cars are coming out. And you have movie studios, because a lot of movies are coming out. And a lot of the advertising is tied to products — you’ll have tax products advertise because it’s tax season. A lot of it is tied to the season.”

But there’s no clear best or worst season to advertise travel. Since 2004, Google searches for the term “travel" have peaked in January and July and plunged between the Thanksgiving and Christmas holidays, but the additional scattering of spring break and winter recess holidays give people opportunities to travel year-round.

“While there are many consumer and retail brands that have succeeded in building awareness with the extensive reach — and corresponding price tag — associated with advertising during the Super Bowl, there are just as many companies who have bet the farm and lost on media buys like this,” said Craig Compagnone, the senior vice president of business strategy at MMGY Global, a firm that's worked for the City of Cleveland, Lufthansa USA, Choice Hotels and the Bermuda Tourism Authority.

This year’s Super Bowl ads will cost roughly $5 million for a 30-second spot, and that’s before factoring in the price of producing the actual commercial. In contrast, it only cost $500,000 to run a similar spot at the 2016 World Series, and roughly $2 million at the 2016 Oscars.

Instead of shelling out the dough to reach an estimated 100 million plus viewers, “most companies in the [travel] industry today are focusing their marketing funds on highly segmented and personalized messaging, sharing relevant content and details based on their prospective consumer audience segments,” Compagnone continued.

It doesn’t help that two-thirds of all travelers today are women (and more often the travel decision makers), while the Super Bowl skews decidedly male. The few travel companies shelling out the big bucks for a splashy Super Bowl ad might do so in hopes of boosting overall brand awareness, but they’re still running the risk of missing their target.

“Additionally, the best Super Bowl ads that get the most buzz tend to be either somewhat wacky or centered around a cultural issue,” posited Rebekah Bouch, an account executive for ad house &Barr, which has worked on accounts such as Discover The Palm Beaches and Experience Kissimmee. With rare exceptions — perhaps among them Universal Studios’ “vacation quarterback” ad or last year’s inclusive “We Accept” Airbnb ad — commercials for travel brands tend to be more straightforward. “I think it's a little more difficult as a travel brand to put together something that stands out in that environment,” Bouch added.

AdAge’s Poggi said that there’s still a chance a small handful of travel ads might emerge in time for the big game. She’s heard murmurings that Turkish Airlines will return with a last-minute ad, and there’s speculation percolating online that Tourism Australia will air a “movie trailer” for the allegedly fake Crocodile Dundee reboot, Dundee: The Son of a Legend Returns Home, widely believed to be an advertising stunt. (Clips online look too good to be true, starring Hollywood’s favorite Australians Chris Hemsworth, Margot Robbie and Russell Crowe, plus American Danny McBride.)

“We pretty much have a good grasp of who’s in this year, but there’s always a few that have pulled back,” Poggi said. Now’s your chance, travel industry.