Las Vegas Parking Fees, When $10 Can Become a PR Nightmare

I am not a complainer. I generally find joy and happiness quite easily and readily. I genuinely look at life from an optimistic angle and believe that my time on this planet has been blessed. Consequently, I do not often get annoyed as the good in my life so outweighs the less pleasant. That being established, I must confess that the recently initiated Las Vegas parking fees and the associated hassle  has significantly affected the fun and enjoyment of our recent visit to “Sin City”. 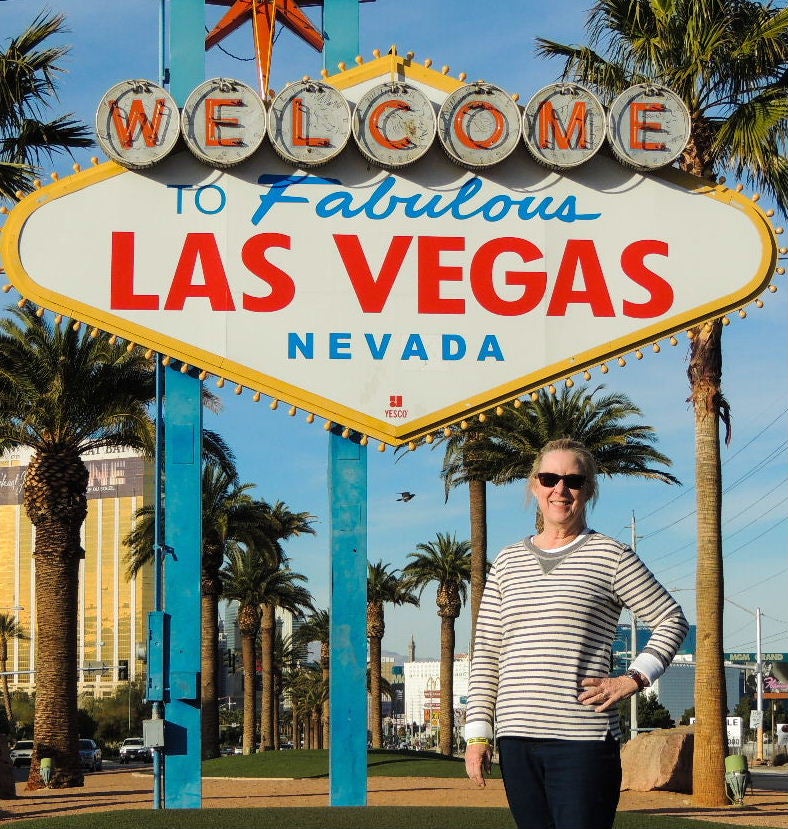 We have been to Vegas dozens of times over the past four decades. We have watched its ebb and flow, its growth and decline, its changes and transformations and its morphs and reinventions. We have watched as Vegas has gone from a mostly gambling centric mecca to more of an entertainment and sensory experience with gambling as just one of many outlets for your disposable income. With the decline in gambling revenue, came a simultaneous decline in the cheap food, cheap rooms and comped freebies that served as the mainstream incentives to get you into and to keep you near the casinos.

35 Years or Chasing Neon: Part One

Shortly after the 2 for 1 buffets and 99 cent shrimp cocktails disappeared and the $19.99 rooms became just a mirage in the desert, there appeared on the Vegas radar a strange phenomenon, the RESORT FEE. I never thought it would be accepted by the masses under the ruse and pretenses that it was presented. I mean it is just a surcharge of $30 to $40 a day per room for which there really isn’t any added value for the consumer. Personally, I would prefer the fee just be included in the quoted room rate. That way, at least, the entire cost of the room could be paid for with points like the Chase Ultimate Rewards points and the silly game of virtual fees versus actual fees could be eliminated.

Following in the footsteps of the Resort Fee, is now the PARKING FEE. It ranges from about $10 to $20 a day depending on the resort and has already gone up several times since it was introduced. I know many will visit Las Vegas and never set foot in the parking garage, but that is not how we travel. We need a rental car in Vegas because while there we may ski a day in Utah, visit Zion, the Grand Canyon, Death Valley, Bodie, Bryce National Park, tour the Valley of Fire, Red Rock Canyon, or just go downtown to eat at Main Street Station or to see what’s up with The Pawn Stars. 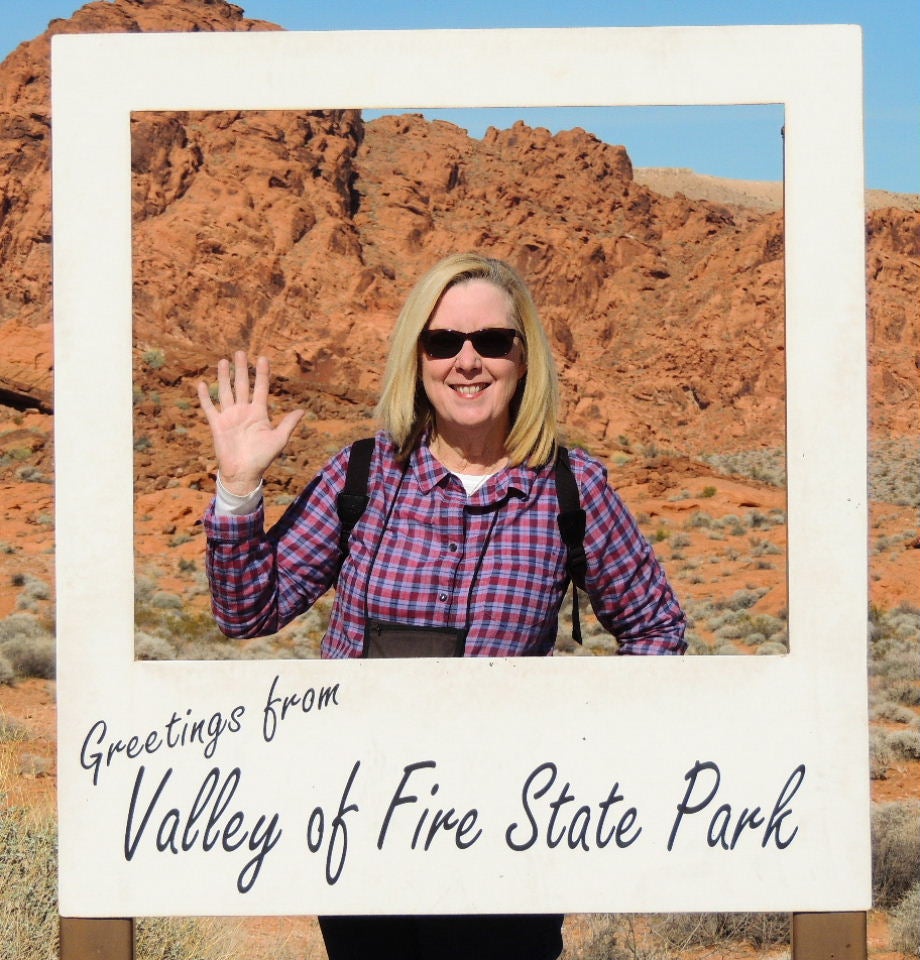 When $10 Takes a Toll on Vacation Fun

I obviously acknowledge that in the billion dollar world of The Las Vegas Strip, worrying about $10 or $15 per day does not seem to make much sense. But some seemingly small and insignificant fees come with such hoops and hurdles that the physical and mental expense becomes much greater in impact than the monetary element. Our experience on this trip with the parking fees and procedures was one of those occasions. 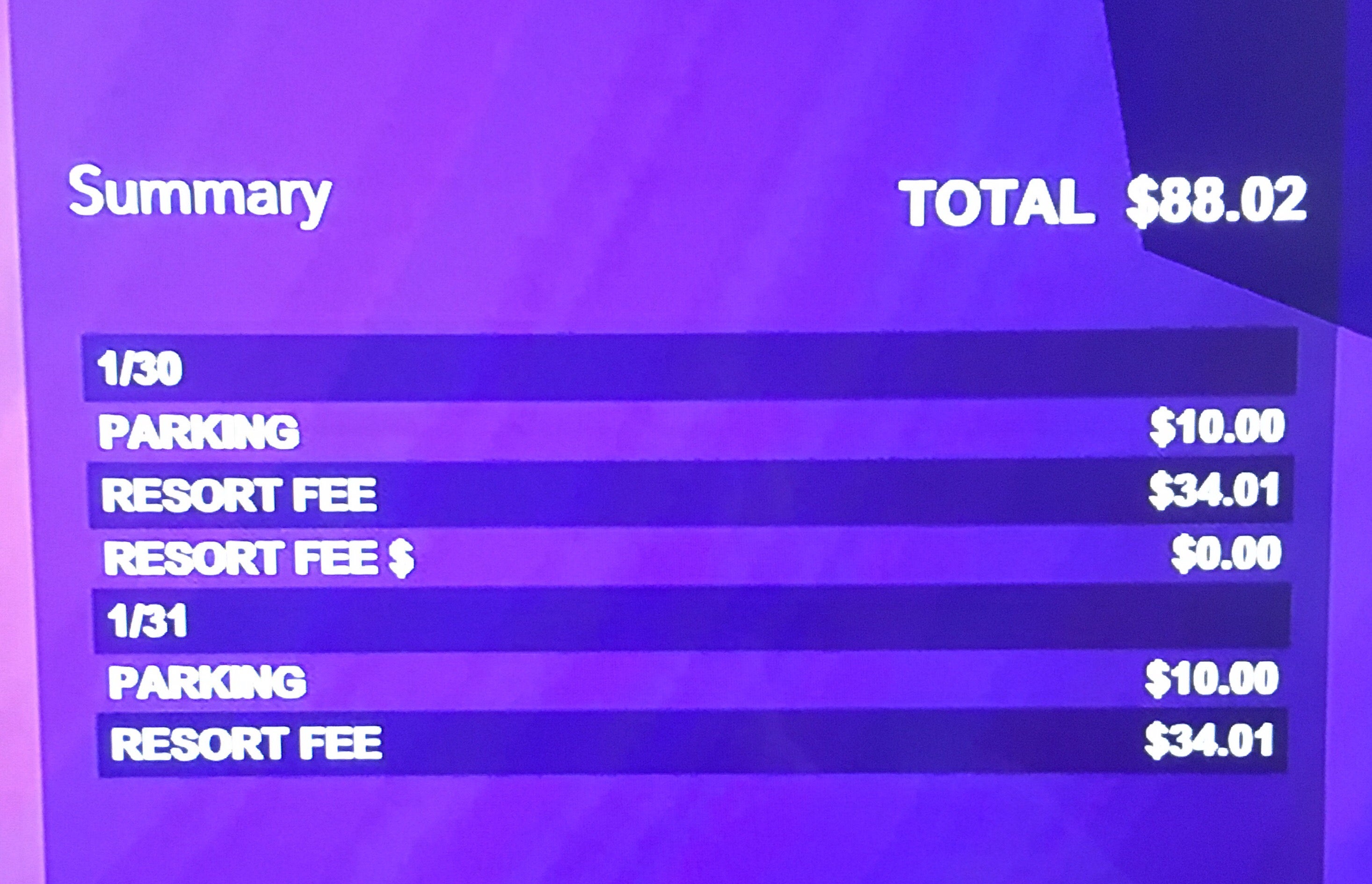 The whole process seemed to be inconvenient, problematic and unnecessary. It seemed almost as a punishment for staying, eating or playing at each particular property. We likely had 10 enter and exits in three different parking garages in our two days there. The first 9 had issues of some sort or other. It was stressful, discouraging and unpleasant. It was as though a cloud of parking garage blues was tinting and tainting our visit. We dreaded each in and out, hoping that there would be no car behind us that would get impatient and honk when the inevitable delay occurred.

It all started going downhill with our very first entry when slots for tickets, slots for credit cards and slots for room keys confused and obfuscated the process. Information was insufficient and our first “Press for Assistance” button was pushed. 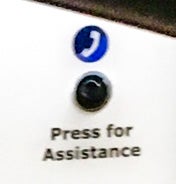 A friendly voice came forth and offered help and in we went. Many signs greeted us as we walked into Harrah’s advising us to take our ticket with us and to be sure and pay before returning to the car. We took note and stopped on the way out to take care of the ticket. 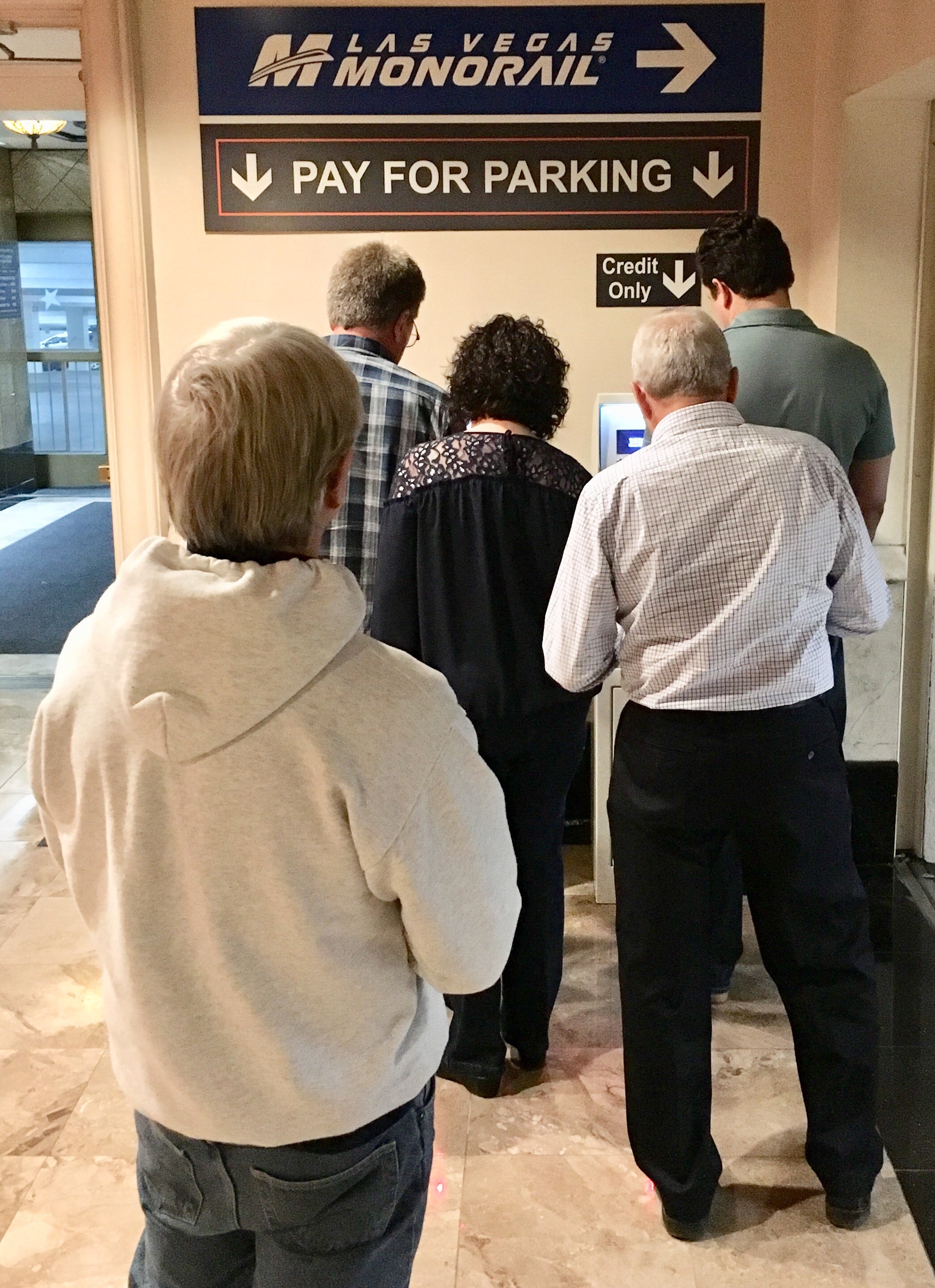 The machine would not read the ticket or our room key card so the “Press for Assistance” button was again pushed. A friendly voice came on and told us the room key card would not register at the machine inside and to proceed to the garage exit. The garage exit could not read our key and “Press for Assistance” button was pushed for the third time. The now recognized friendly voice suggested that something was wrong with our key and that she would lift the gate. Aaaah, freedom! 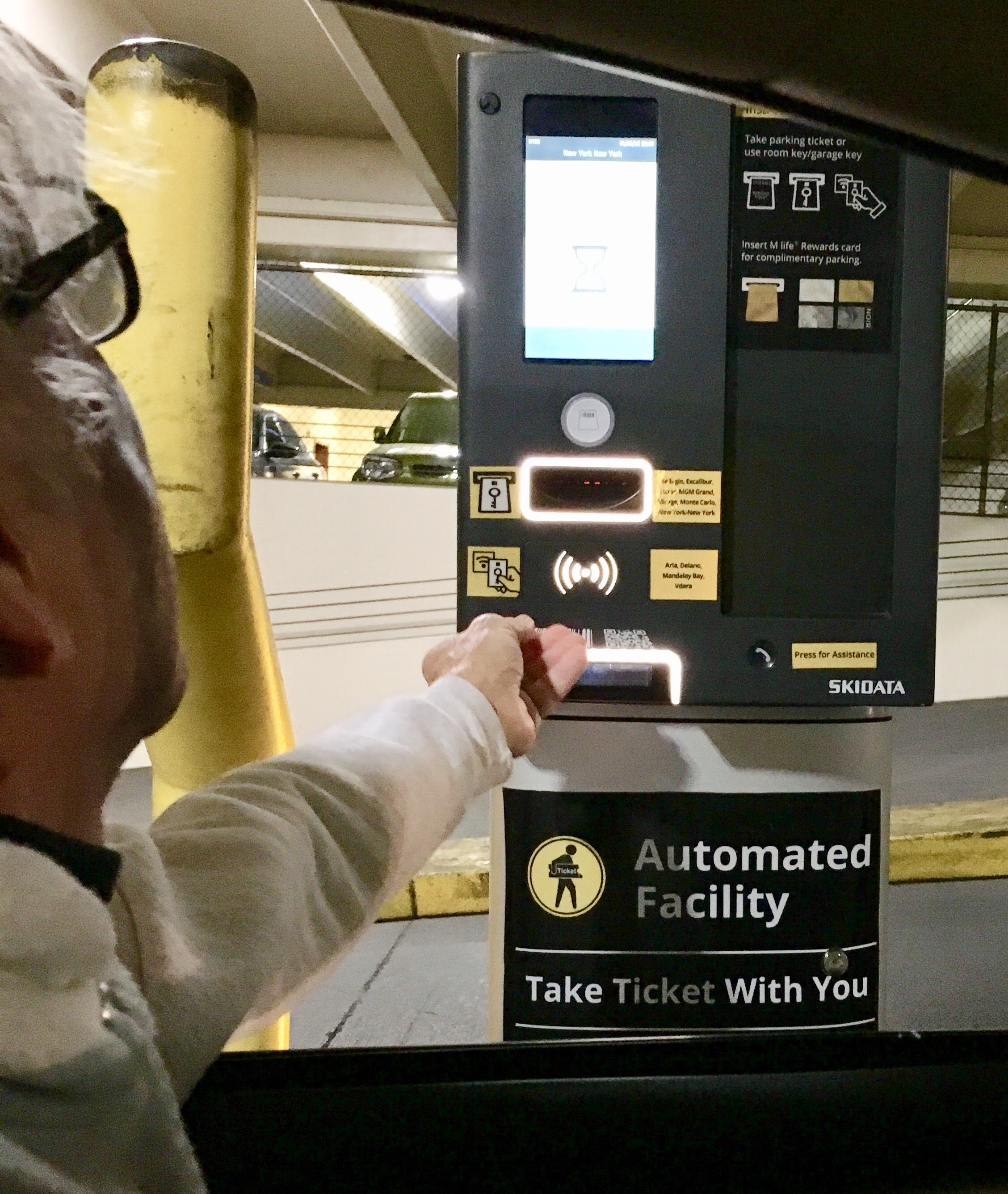 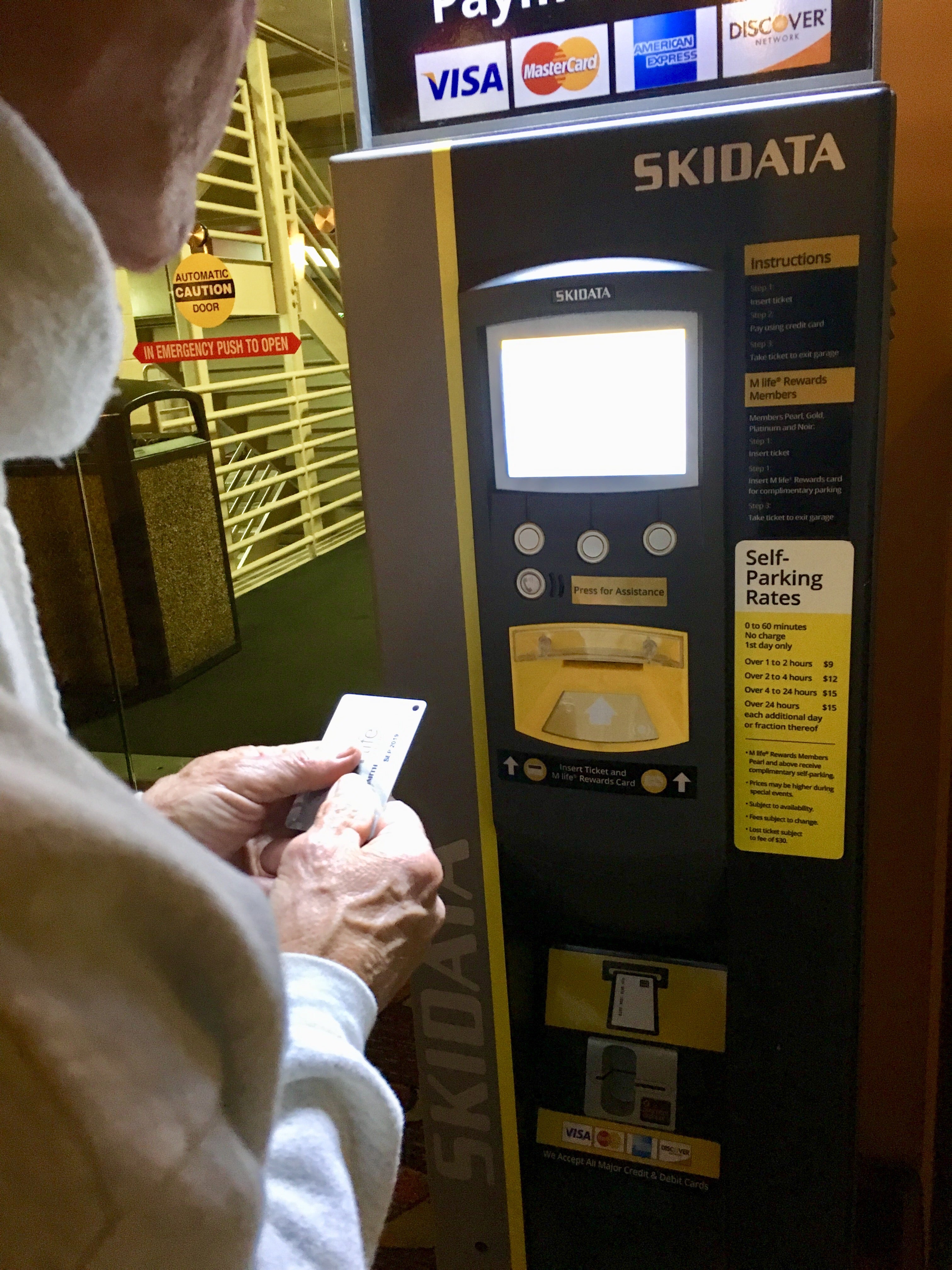 Two other times we utilized the assist button before the process started to try and circumvent any potential problem. Both times a problem occurred anyway. Twice we spoke face to face with employees prior to action with the same hope that being proactive would bring us clear sailing. Wrong both times. On three of these occasions, we were advised that a “Press for Assistance” option was available if we ran into trouble. We got the impression that we were actually being warned for when a problem would occur. 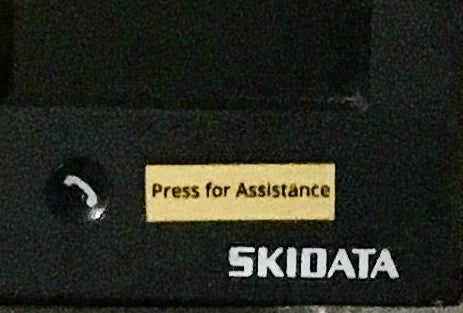 Our final exit went well. Almost too well. It was as though a spy in the garage sky saw us coming and just threw the gate up as we got near. No ticket was presented and no key card was offered. Just an open gate. We got out while the gettin’ was good.

Our initial impression on paying to park in Vegas was not a positive one. The concept and implementation of the parking fee seems counterproductive to the basic tenets of the service industry, especially one that is playing the role of a compensated host. It is universally accepted and understood that vacations are to be refuges from stress and complications. Our reaction, our experience, was quite the opposite. It seems, to us, that the fee and the related processes are both very poor public relations and a sad way to make a few more bucks. Without passing judgment or making any assumptions, the car traffic in the parking garages seemed to be less than normal. I will not attempt to guess why.

We hope that our next visit does not find a seating fee at the restaurants with a plate and utensil user fee thrown in. Just sayin’. Sorry for the rant. Our next offering to this site will be positive. Safe travels! 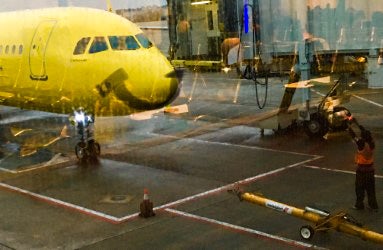 Buddy Smith is a contributing writer for The Points Guy
You might like
7 ways Delta One business class on the ‘new’ A350 surprised me — and 2 ways it didn’t
News
38m ago
Deal alert: Travel to Costa Rica this fall for as low as $218 round trip
Deals
5h ago
Dolly Parton just turned her glittery tour bus into the ultimate Tennessee hotel suite
News
9h ago
Delta SkyMiles® Platinum American Express Card